It's been quite a while since I reviewed a b&w film from Lomography.  Back in 2011, I reviewed Lady  and Earle Grey films. Since then, Lomography has really expanded their line of film offerings, especially in the color emulsions, some of which I have also reviewed.   Lomography's style of branding and their target audience- young, adventurous and film-curious, has made an impact on how film is marketed.  Few people get excited if I asked them about Fompapan 100, but slap a different brand name on it with attractive packaging, and the film gets sought after.  So too, have Lomography's "new" black and white emulsions, under the branding of Lomography Kino films, come into the hands of people that would never have heard of ORWO cine films.  I'll give Lomography credit -- I like their advertising and how they hype up an emulsion, and that's okay.  If it gets more people interested in trying something new, that's great.  Some may even find that a particular emulsion provides an opportunity to be creative with a result that matches their vision. 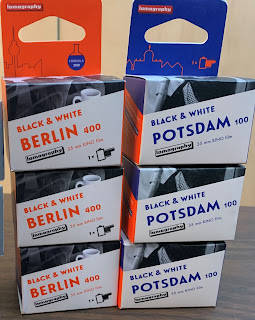 This review will cover the two emulsions that Lomography has released under the "kino" name:  Berlin - ISO 400, and Potsdam - ISO 100.  First of all what exactly does Lomography mean by the "kino" (cinema) label?  Who makes this film?   Here's Lomography's description for the Berlin:
"A Refined Formula for True Film Lovers
Inspired by the New German Cinema sweeping through Berlin in the 1960s, our original Berlin Kino Film emulsion was an utter blockbuster. However, as German cinema evolved through time, adapting to meet the innovatory spirit of its founding fathers, so did our film formula. Refined and brimming with greater artistic control, the Berlin Kino B&W 400 2019 Formula will allow you to capture moments of your life in an eternalized enchanting monochrome. "
and the Potsdam:
"A Legendary Roll of German Cine Film Reborn
Inspired by the New German Cinema sweeping through Europe in the 1960s, Lomography’s Kino Films are extracted from rolls of cine film produced by a legendary German company that has been changing the face of cinema since the early 1900s. Originally used to make moody monochrome movies, their gorgeous black and white tones lend a timeless effect to cinematic scenes."
Certainly attractive descriptions of the cine films that are produced by Orwo - N 74 Plus and UN 54:
"Product description: ORWO N 74 plus (Negative Film) is a high speed black-and-white panchromatic camera film for both outdoor and indoor usage. Its wide exposure latitude makes it especially suitable for use under low light illumination and difficult light conditions.
Applications include documentary films, news coverage, underwater and industrial cinematography. Use of N 74 plus is also recommended under normal light conditions when greater depth of field is needed. The N 74 plus has improved slippage, extremely low shedding and excellent antistatic qualities.  Compare To: Eastman Double X (250 ASA)"
"Product description:  ORWO Film UN 54 (Universal Negative) is a panchromatic medium speed black-and-white negative camera film for both outdoor and indoor usage. According to the ORWO Instruction 4185 the UN 54 film can be processed as black and white reversal film and be used to produce direct positives.   Compare To:  Eastman PLUS X (80 ASA)"
Now you see the difference between descriptions to two different audiences - the film hobbyist and the professional  cine film user.  Based upon the two different descriptions, which would you choose, not knowing they are the same product?  Lomography's, I am sure.   This is an example of many of the "new" films are coming to market for the 35mm shooter.  Whether it's from Lomography, Cinestill, Film Photography Project, Washi, or others - cine films are finding their way into the hands of avocational and hobbyist photographers, and it's all good.
My experience with these films goes back a few years, as I received samples  of the ORWO N74 Plus and UN 54 films in 2016. I'll compare this latest batch of Lomo films with the ones that I received from ORWO.
Lomography Berlin Kino 400 - As Lomography touts - "Capture life’s most elusive moments in everlasting monochrome charm with the 2019 emulsion of our iconic black and white cine film."   I had not tried the earlier Berlin emulsion, so I can't comment on it.   Was the prior emulsion "old stock" from ORWO?  Hard to say, so it's all just conjecture, but my film cassettes do state "New Improved Formula!"   I bought them from B&H back in late 2019.  I love the packaging and the fact that Lomography provides developing information.   I shot my first roll in February in my FM3a,  and the second in my Nikon FE2 in June.  I compared those negatives with a roll of actual ORWO N74+ that I shot in 2016.  These are not the same films.  The N 74+ from 2016 has the typical cine sprocket perfs which are rounded, whereas the Berlin 400 2019 has standard 35mm squared-off perfs.  So, is the Berlin 400 I received something else, and NOT N74+?  Some research reveals that Filmotec (the branding for the ORWO cine film) released N-75 in 2019, with some improvements, rated at 400 ISO in Daylight, 320 ISO for Tungsten lighting.  It's also supposed to have  additional anti-halation undercoat (AHU).  That may explain the difference, as well as my 2016 film has "Filmotec ORWO N74 813717 79A06" in the film rebate. The Lomography film has no film information printed in the rebate.  I feel that the film base is quite dark and darker in the two Berlin rolls that I shot, whereas the ORWO N74+ has a lighter gray film base.  The negatives fit nicely into my scanner holder, without cupping or curling, so that is a plus.  Scan-wise, I think the results are very good, though there is some grain when developed in straight D-76.   The one thing I didn't care for was that Lomography uses a two-piece plastic cassette for this film.  I ended up prying it apart in the dark to remove the film, which isn't optimal.   So, I am fairly sure that the Berlin Kino 2019 emulsion is ORWO N75. Is the New Improved Formula batch that I received the same? That I do not know.

Lomography Potsdam Kino 100 - Note that because this film can be developed as a negative or a positive film, it has quite a write-up on the Lomography site.   I have not processed it as a positive, but for a cine film, that is a real plus for those shooting the 16mm version.  I shot my first roll in February in my Nikon FM3a, and the second roll in my Pentax Spotmatic F in June. I compared those negatives to a roll of ORWO UN54 that I shot in 2016.  They all appear to be the same film, except that the ORWO has "Filmotec ORWO UN54 512912 14A11" on the film rebate.  I really like this film, as the scans are beautiful, and there is something about the tonality I really like.  The Potsdam film was developed in straight D-76 for 5 min 45 sec, and the UN54 was done in D76 1:1 for 7 minutes. Results are comparable. Standard metal cassettes are used for this film, or at least for the rolls that I purchased.
Overall impressions - I have other 400 ISO films that I like better than the Berlin 400. It's not bad, it's just that I am not liking the darker film base that to my eye, seems like base fog, and the more noticeable grain.  I much prefer Kentmere 400 and HP-5.  The Potsdam film reminds me a bit of Plus-X, and I do like its rendition of shadow areas.  Of the two, it's one that I would purchase again for landscape photography.
As with any film - there will be people that find Berlin 400 or Potsdam 100 perfect for what they shoot, and others that won't like it as much as some other emulsion, which is one of the great things about shooting with film.  Try them yourself and see what you think.  It's also important to note that I give kudos to Lomography for providing more information on development, along with examples from different developers.
A few sample images - scanned with my Epson V700 scanner, post processed with Paint Shop Pro 64-bit.


In the end, both of these films are fine films to shoot with, giving one ever more reasons to shoot film!
Posted by mfophotos at 7:38 PM