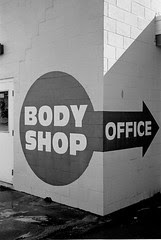 bodyshop
Originally uploaded by argusmaniac.
It's been a while since I have shot any Techpan -- Kodak's high-resolution b&w film (now discontinued) that has a wide range of uses, depending on the iso and developer that you combine it with. I have about 300 feet of it in my fridge, so at the rate I am using it now, it will last a long time.

Yesterday, I decided to shoot a roll in my daughter's Olympus 35RC -- a sweet little rangefinder camera that I covet. She's away in Austria with her orchestra from Huron High. Perfect opportunity to use the camera, especially since I replaced the dead battery.

Techpan is a slow film, -- iso 25 for pictorial use, and I developed the film in Technidol LC -- recommended for pictorial use with a wide tonal scale. I am very impressed with the camera, the film, and it scans really easily. I scanned some negs at 2800 ppi, and still could not see any grain. It prints really nicely, too.

You can find more info on the Olympus 35RC here and here.
Posted by mfophotos at 8:34 PM No comments: 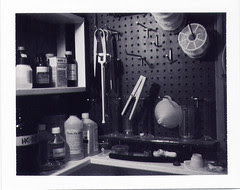 polaroid in the darkroom
Originally uploaded by argusmaniac.
Last night I was getting the trash ready to take out, and I heard a meow coming from the darkroom. I immediately knew it was our black furry cat, Phantom. I was in there the previous evening developing film, and I was talking on the phone to my friend Bill. I saw her climb into the open cabinet below the enlarger while I was on the phone. I forgot to see if she was still there when I closed the door an hour or so later.

Of course, as soon as I heard her plaintive meow, I opened the door and she came running out, very distressed. I also knew that if she had been in there for almost 24 hours, a mess was going to be there. Actually, she's a very fastidious cat, so the the mess was confined to a foam anti-fatigue mat on the tile floor. That got tossed, and I scrubbed down the floor, too. While I was at it, I took out all of the plastic and glass bottles, put the good empty ones in boxes, tossed the cruddy ones, and took stock of what I had under the sink. Threw out a few other things, too, such as some 16x20 plastic trays that had never been used but had gone very brittle.

From now on, I will make sure that I keep the cabinet doors shut, and keep an eye out for a black cat that likes to curl up in confined spaces.

Perking Up in the Darkroom 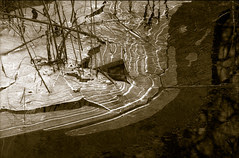 ephemeral pond
Originally uploaded by argusmaniac.
For some time, I have thought about trying to use the "folgernol" or "caffeinol" recipe to develop some black and white film. I have been seriously developing my own film for about six years, and have used a variety of commercial developers, mostly sticking with D-76, HC-110, Rodinal, and Diafine.
The attraction to using caffeinol is that it goes against my gut instinct... why in hell would someone use instant coffee to develop film? In addition, the low-toxicity and the ability to have good shadow detail with the developer is a plus.

I shot a roll of Ilford FP4+ (125 iso) and developed the film in the caffeinol for 15 minutes at 74°F, agitating every minute. I think the results were good... in fact, the negatives were pretty dense, so I think I will adjust the time to be a few minutes shorter next time.

The beauty of this developer is that it uses ingredients that are common and easy to mix. Something to think about in the years ahead when the big companies reduce the choice of developers.
Posted by mfophotos at 10:22 PM 4 comments: 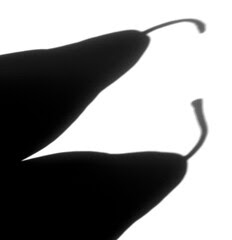 two shadows or a pair of pears
Originally uploaded by argusmaniac.
I had fun for an hour or so yesterday, playing with light. Manipulating photons, so to speak. The sun was coming through our bedroom window and it inspired me to play with some still lifes. I have a hinged sheet of white foamcore that I put down for the backgound. I set up my tripod, my camera, and got some subjects out. I love playing with pears, because their unusual shape creates lovely and whimsical shadows. One of my favorite images is this one, where only the shadows cast on the background are the subject. It looks almost like a Moray eel mouth, too.
We need to play more... it infuses our imagination and our enthusiasm for life. In this case, I played with light and had a great time.
Posted by mfophotos at 7:36 PM No comments: 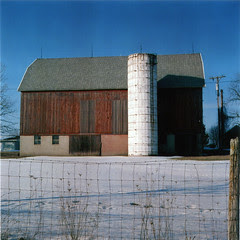 This barn is in Freedon Twp., which is near Manchester, MI. Film is Agfa Optima 100. Processing done by Dwayne's Photo in Parson's KS. I'm really happy with their service, and they are online . They are the only lab in the US that will develop Kodachrome!
Posted by mfophotos at 11:16 PM 3 comments: 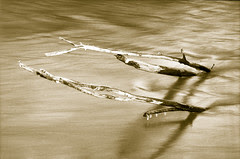 clinging
Originally uploaded by argusmaniac.
I have been using Ilford Pan-F, a relatively slow B&W film that is fine-grained. It's a nice film for landscapes, still-lifes, and some people like it for portraits. I have not tried it for that, yet. I had always rated it as an ISO 50 film, wand have been generally satisfied with my results Then I read somewhere -- perhaps on photo.net, that someone really liked it better when they shot it as an ISO of 32 (same as the old Panatomic-X) and developed it in Diafine.

I figured that I ought to try that. too. I shot this photo at Matthaei Botanical Gardens a few weeks ago, and finally developed it last night in Diafine. I really like the overall results. This was a quick scan done on a flatbed scanner, not my film scannner, and made into a duotone in Photoshop. I wanted to have the water blurred, and yet the branch in relatively good focus. I shot it with my Nikon FM2N on a tripod with a cable release and a 70-200mm Vivitar zoom lens. The exposure was probably something like f16 at 1/2 second. I never record that information. In any case, i am pleased with the results, and Diafine is becoming a real favorite developer that I am using frequently.

That's the beauty of film... you can get different effects depending on the type of film and speed that you use. Can't do that with digital without post-processing...
Posted by mfophotos at 7:58 PM 3 comments: