A few years ago, I picked up a Canon EX EE, which was a strange SLR, to say the least. Other than shooting with a Canon T70 for a month, and borrowing a Canon Rebel 35mm SLR and using (for years) a Canon Canonet 17, that was the extent of my film shooting with Canon cameras. Although I have managed to acquire and use a number of SLR systems, Canon has not bee one of them until very recently. A week ago, I picked up a Canon FTBn from a fellow A3C3 member, Kevin Mount, for $30, which included the 50mm 1.8 Canon lens. I put in a couple of Zinc-air cells and the meter immediately sprang to life. The camera is rock-solid, much like a Nikon Nikkormat from the early 1970s. I took it out to shoot with on the next day with, bringing it along on a UM Art Museum trip with some fellow A3C3 photographers.

To not like:
use of PX-627 batteries (Mercury) requires a work-around today
lens controls backwards from Nikon (of course, non-Nikon users will say otherwise)
sometimes odd filter ring of 48mm

The quality of the images I got back were very good, as the 50mm 1.8 is a seriously nice lens. I can see why these older Canons appeal to many photographers, and I now have a camera bag with some lenses to make up a nice kit for future outings.

Posted by mfophotos at 3:52 PM No comments:

What was I thinking?

I was rummaging around through some old files on a hard drive, and came across this photo that I shot in 2002 when I must have been selling the item on ebay: 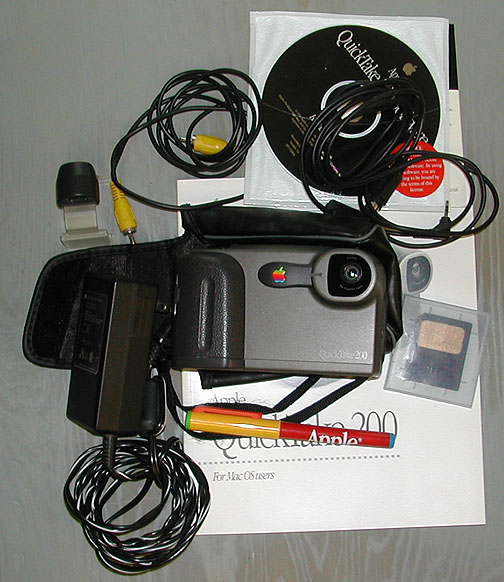 An Apple Quicktake 200, which I recall buying at a deep discount around 1997, when Apple discontinued it. It was not even a megapixel camera, as the images were no larger than 640x480 pixels. But, I was probably seduced by the cute rainbow apple and the ease at which I could upload an image onto the web. The fact is, I probably would have been a lot farther ahead to have taken the money I spent on that camera and used it to buy a really neat film camera! I think today's 5-dollar keychain cameras take photos with about the same resolution. The point is, don't be seduced by new technology, just because it's new. Instead, wait for it to become mature to the point that it does not limit the way you would do things. When I think of the images that I took with that camera that will never be larger than 640x480 pixels, I could kick myself.

The Quicktake 200 originally sold for $600, but I'm quite sure that I paid far less for it, because Apple stopped marketing cameras in 1997. Some history about it is here.

I don't imagine that I sold it for a whole lot in 2002, but I bet whoever bought liked that shiny rainbow apple...
Posted by mfophotos at 12:22 PM 1 comment:

A Tale of Two Ponies

Kodak has a long history of interesting names for its cameras. Brownie, Instamatic, Ektra, Medalist, and so on. At some point, it seems that they had almost as many film formats as camera names. In their effort to corner the consumer market, they had a camera and film size for every niche. During the Great depression, people were not buying as many cameras, and certainly were not using as much film, so someone got the great idea of selling a camera that was small, inexpensive, and held only a small roll of film. Let's see, 8 shots per roll should do it -- that might be two Christmases worth of photos in some households. So, the great minds at Kodak came out with the Bantam series of cameras with a new film size - 828, which is based upon the width of 35mm film. However, instead of the film being placed into a daylight-loaded cassette, it was placed on a spool with backing paper like 127 film, the next largest roll film size. Bantam - as in small (bantam roosters, bantam-weight boxers, etc.), meant that the collapsible Bantam cameras could easily be placed in a pocket, and the fairly sharp lenses in those cameras gave reasonable results. The Bantam camera first appeared in 1935, and the famous Bantam Special, designed by that great Art Deco designer, Walter Dorwin Teague, appeared in 1936 for the grand price of 110.00. Not exactly pocket change during the Depression. The Bantam Special was discontinued in 1948. Today, that beautiful, if largely unusable camera regularly sells for $200-$300.

What does any of this have to do with ponies, you ask? Well, in 1949 Kodak introduced a well-made camera called the Pony 828. That camera used 828 film, and I believe was the last model to use 828 sold by Kodak. The Pony 828 originally sold for $30.00. That's still a nice amount of money for a camera back then. The Pony 828 was sold for 10 years, and was replaced by the Kodak Pony 135. The example shown here, the model B, first appeared in 1953 and was in production for 2 years, when it was replaced by another Pony 135 model.

Note that the Pony 828 has no rewind knob and frame counter, as it uses a green window on the back to keep track of what frame you are on. Like other roll-film cameras, the film just rolls from a supply spool to a take-up spool, and then you remove the completed roll for processing. Definitely not a design for anything more than a very casual photographer!

Note that the Pony 828 (bottom) is smaller than its 35mm successor: 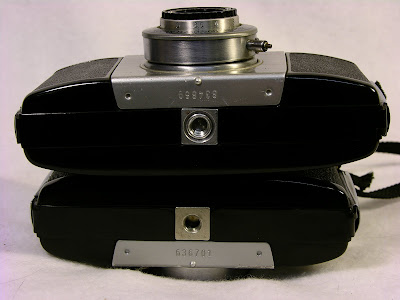 The other difference between the 828 and 35mm versions is that the 828 negative is larger than the 35mm model. Bantam negatives are 28mm tall x 40mm long, whereas 35mm is 24x36mm. Noticeably larger, but not like 127 film. Within the constraint of the format, the Bantam negative is actually pretty good.

I shot the roll of Verichrome Pan and expected mediocre results if only because of the age of the film. I wasn't worried about the lens, as that same lens and shutter is found in both Pony cameras: 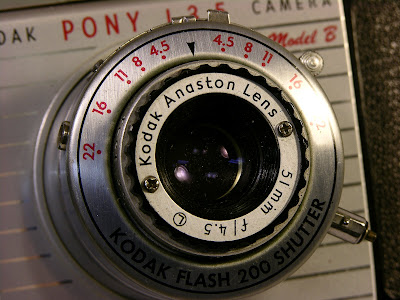 and I knew from experience with the Pony 135 to expect fairly crisp images, so long as the zone-focus scale was set properly.

It's pretty obvious that the Bantam film/camera category had limited appeal. The folding Bantams were stylish, but lacking in features, and apart from the Bantam RF and the Bantam Special, were easily eclipsed by 35mm cameras. The Kodak Pony 828 was the Bantam's last gasp at the "low-end" of amateur cameras. I somehow got hold of a Pony 828 when I was in college and shot a roll of Kodachrome 25 with it-- and I still have the slides. The other spoiler for the 828 film was that I know of only one other US company that produced cameras taking that size -- Argus. The Argus Minca (or Model M)had a short life, being a pretty basic and cheap camera. There was also the Coronet Cub (out of England), but I have never seen one.

The Kodak Pony 135 cameras are generally pretty decent cameras, and were emulated by the Argus A4. The only Pony to avoid is the Pony II, as it uses an EV system (like the Argus C3 Matchmatic) with limited exposure options.