I am serious about this.  Like a lot of  Nikon users, I initially derided the Nikon 1 system as a marketing gimmick - small sensor (when we were clamoring for FX sensors, they gave us what?); no viewfinder (well the IV1 does have an EVF); different colors?, etc.  Now, I won't claim that my 1 J1 is perfect -- the dial is fiddly, and we don't need the red button, etc.  However, I have gotten used to the menus and controls, and I am very pleased -- sometimes astonished -- at the results from this little camera.  I agree with Thom Hogan that the camera was marketed poorly -- and to the wrong group.  Instead of Pros carrying an iPhone,  a Nikon 1 with a 10 mm lens (= 27 mm in 35 mm format) will give you some really great images.  This system should have been designed and targeted for those of us that love photography, but carrying something smaller, lighter, and more robust than a P&S with a tiny sensor would be a good thing.  There are numerous complaints online about the faults of the Nikon 1 system, but few complain about the images from the cameras.  Lately, I have been carrying my 1J1 in my camera bag along with whatever film cameras I have that day.  Slapping a polarizer on the lens has given me some of the most dramatic shots I have taken, and cropping the shots to square format afterwards has not detracted from the results.  A few examples:
Today, at Cranbrook --

At the Brett Weston Exhibit in Ann Arbor:

At the Rolling Sculpture car show in July:

I'm not saying the Nikon 1 system is the only tool you need, but with a 10mm, 18.5mm, 10-30mm lens set, it will do a lot of shooting quite well, and like any camera, the more you use it, the more comfortable you get with  it.    I picked mine up as a refurb from Nikon, and it has been a very good tool to have. Go online and buy a set of 40.5mm filters for yours if you haven't done that yet.  I also have a 40.5 to 49mm adapter so I can use close-up lenses and other filters.
Posted by mfophotos at 8:54 PM No comments:

A few weeks ago, I picked up a bunch of film and a camera, the Canon Z115 for five dollars.  One of the rolls of film turned out to be Kodak Royal Gold 1000, one of the faster C-41 films that Kodak pushed out the door -- which I wonder if it was later called Kodak Max 800.  Seeing that the film expiration date was 1998, I rated the film at ISO 400 and shot it in my beautiful Nikon F3HP around town and in Dexter.  It was only 24 exposures, which can be somewhat infuriating when you want to try out something special.  Anyhow, I finished the roll up on Saturday in Dexter and dropped it off at Huron Camera.  I stopped by this afternoon to pick up my CD and the negatives.  Overall, I am pleased with the results in that my estimation of ISO 400 was pretty close, though in the scans one can see the shadows blocked up.  It's grainy, which is to be expected for a high-speed expired film, but the grain looks interesting in some of the shots. 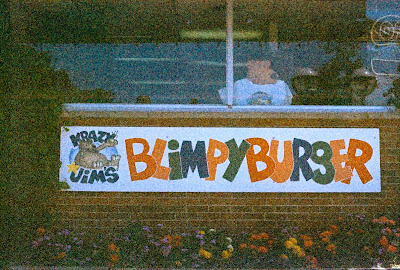 Krazy Jim's Blimpy Burger's last day was the day before I shot this.  It's located in a block of houses that UM has purchased and will be razed to make way for a graduate student dorm. While the closing has gained a lot of press and brought thousands here for a last burger, I am ambivalent.  It's the kind of place that people should eat at sparingly if they value their arteries... 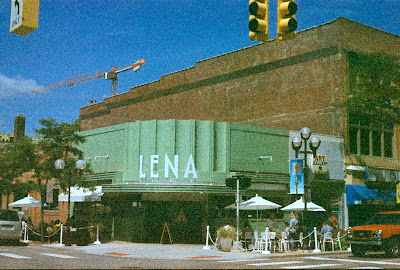 Last year, Lena replaced the Parthenon Restaurant which had been at the corner for at least as long as I have lived in Ann Arbor - 32 years.  I like the old facade and the color scheme they chose.  Lest anyone think things don't change, the building was a drug store back in the 1950s. 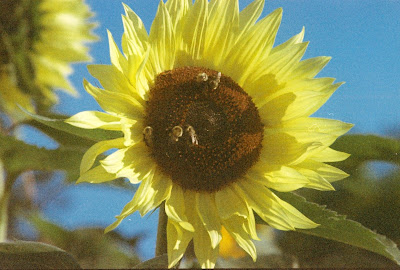 I just can't resist shooting bees on sunflowers. What can I say? 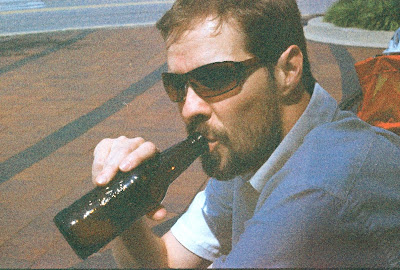 George Borel in Dexter.  He's behind the counter at Huron Camera and is a very knowledgeable photographer and a good person to know. You can see the shadows blocking up in the expired film.  The highlights look pretty decent, though. 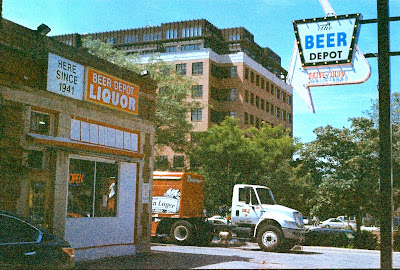 The Beer Depot is another iconic place in downtown Ann Arbor.  The neon sign fell over a couple of years ago, and the store owners were able to convince City Hall that the sign could be replaced.  It does look pretty good, though I confess I have to see it at night.

Most of the shots on the roll were decent, and these are just samples from the roll.    People ask me why anyone would want to shoot expired film.  It's partly a challenge to see what I can coax from those old films, and a gamble, as one never knows how these films were stored. I'm not into trying to prematurely age films by subjecting them to high heat, etc.  I'd rather wait until something comes my way and see what happens.  A rule of thumb is to reduce the operating ISO by one stop for each decade, and the faster the film, the more sensitivity it loses over time. I'd say my guess of ISO 400 worked pretty well here.

Posted by mfophotos at 9:59 PM No comments: 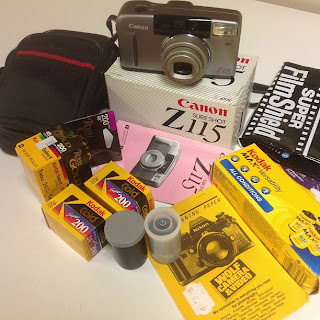 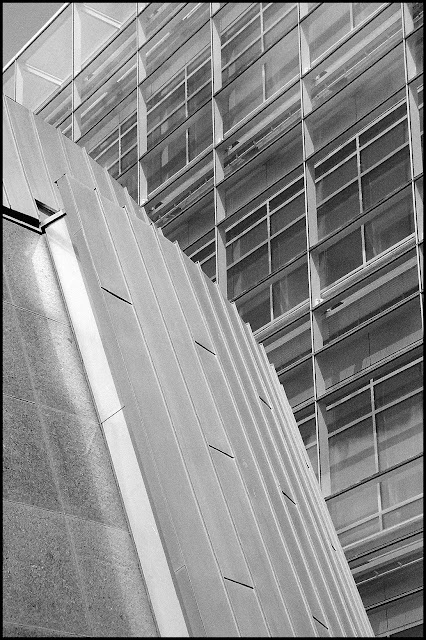 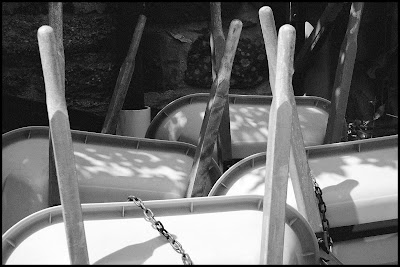 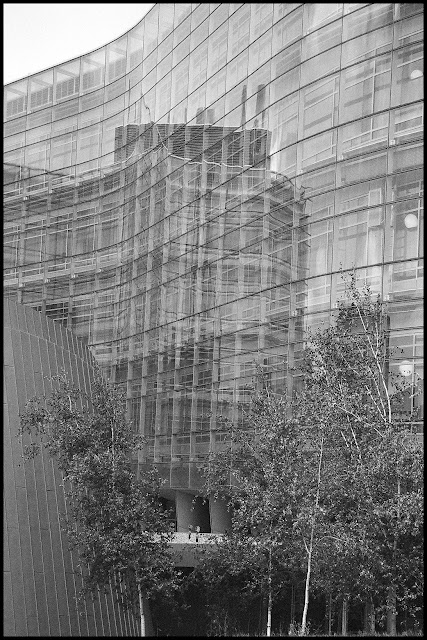 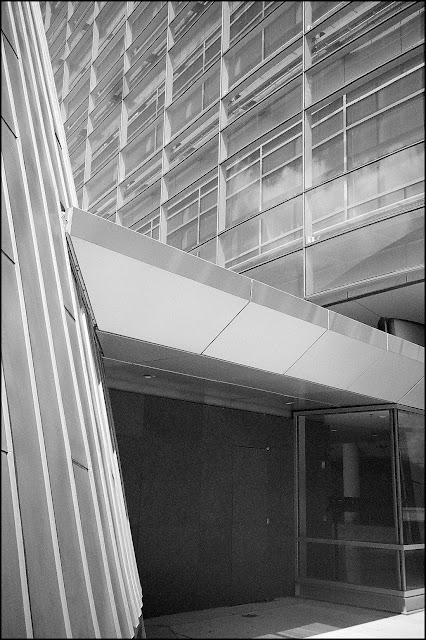 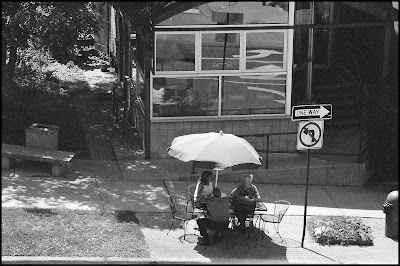 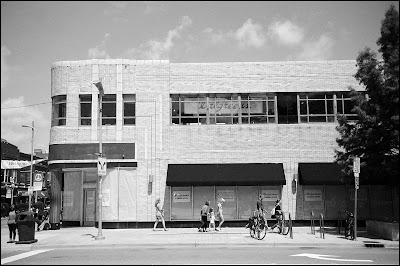 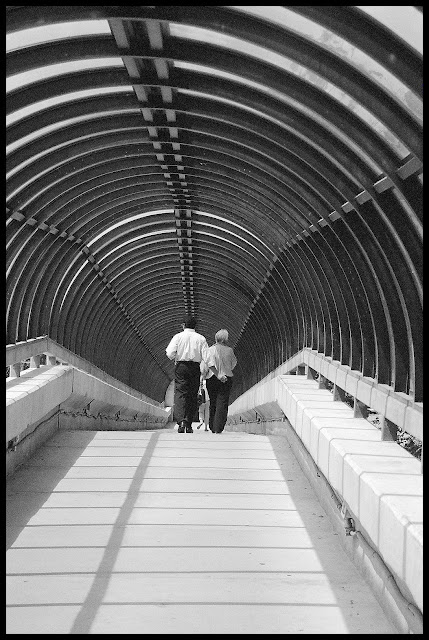 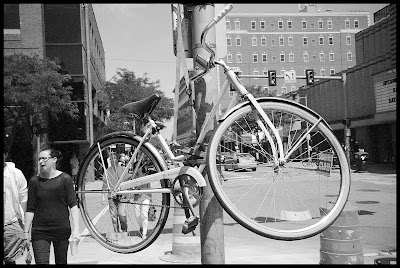 Posted by mfophotos at 10:31 AM No comments:

I was searching through some old backup CDs today, looking for some long-lost images for a project.  I didn't find them.  I did find these shots of a brand-new Kiev 19M that I bought in 2001.  It used Nikon F-mount lenses, and was quite basic, built like a tank, and sounded like one.  Comparing it to a Nikon FM was was out of the question.  I probably had the Kiev for a year or so, and sold it on ebay for as much as I paid for it. 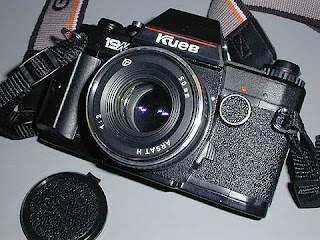 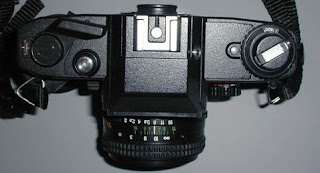 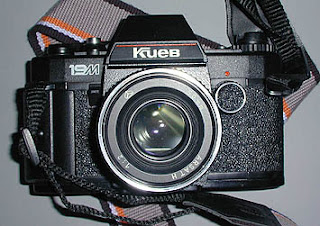 I am sure I have some photos somewhere that I shot with it.

Posted by mfophotos at 1:01 PM No comments: 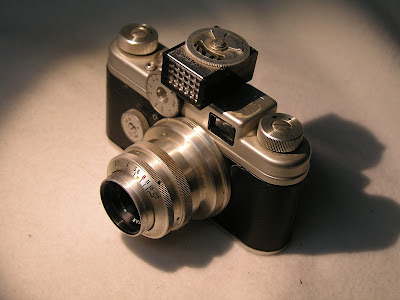 This Tuesday, August 13 is the 13th Argus Day or Argust 13.  Yeah, it's a day for nerdy camera people that have Argus cameras (made right here in Ann Arbor, MI) to take them out and shoot some film with them.  I started with Argust 2, and have been taking part most years since.  My Argus of choice is this C-4 (with the LS-3 Selenium meter in the hotshoe).  The viewfinder and rangefinder are very good, and the camera handles pretty much like a rangefinder camera should.  Of all the Argus cameras produced, I think this is the classiest and most fun to use.  I loaded it up with a roll of Ultrafine 125 B&W film, and look forward to seeing my results after the 13th.  If you want to learn more about Argus cameras, go to these links:


If you are interested in using an old Argus, remember that these cameras are now at least 50 years old, and there are millions of the Argus C-3 "brick"  models out there.  Don't overpay -- most of the models are worth less than $25 if they are in good working order. An Argus 75 is quite common, but it takes 620 film, not the 120 spools. However, if you want to use 620, the FPP store has it in stock!  I would stay away from the Autronic models as most of them have not fared well over the years.  A C-3 or C-4 will allow you to use 35mm film, and will give pretty good results.

Posted by mfophotos at 11:45 PM No comments: