I never expected to have 500 blog posts. Ever. A blog is a way to express one's self, and when I am feeling creative, the post come easily.  When Iam not, or too busy, it does not get written.  I don't have a schedule or a plan for blog posts. They happen when I feel like writing.  When I started this blog in 2006, I really had no idea where I would be going with it, but I knew that I loved photography and using cameras of all sorts, hence the name Random Camera Blog. RCB has been a fun outlet for me, and has kept me writing about photography.  Sometimes I put out 4 or 5 posts in a months, sometimes only one. I try to keep them interesting, and I thought you might be interested in the stats. Here is a capture of stats from over the past weekend: 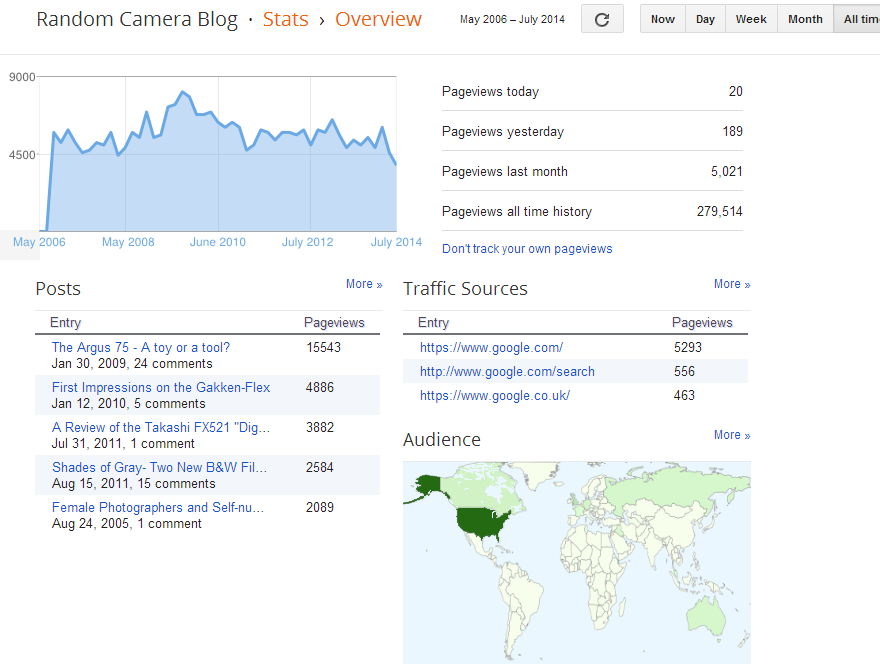 The average monthly pages views hovers around 5000, which I think is pretty good.  The all-time most viewed post is the one about the Argus 75, and the second is a review of the Gakken-Flex.  Wow.  Who knew that the Argus 75 post would be so popular?  It's the first thing that shows up in searches on that camera, too.  So, I am quite pleased to have a lot of followers as well as many visitors. I hope that viewers find my information useful and that a post has inspired them to try something new.

Only one thing bugs the hell out of me regarding the blog -- I really dislike when someone looks like they are making a comment about a post, but it is really an advertisement for their web site. Do you really think I want a link to some half-assed web store selling digital stuff?  Nope.  You get deleted.  I appreciate real comments and am always willing to reply if you have a question.

I don't want to just write a bout the blog.  I didn't get to 500 posts without writing SOMETHING about cameras.  As you can tell from my posts, I have had a lot of them pass through my hands over the years.  Some I keep, others I use for a while, and then sell, give-away, or trade for something else.  Recently, I have written quite a bit about the cameras that I have been selling for someone else.  I also have a soft spot for camera bargains.  Here is one such bargain... 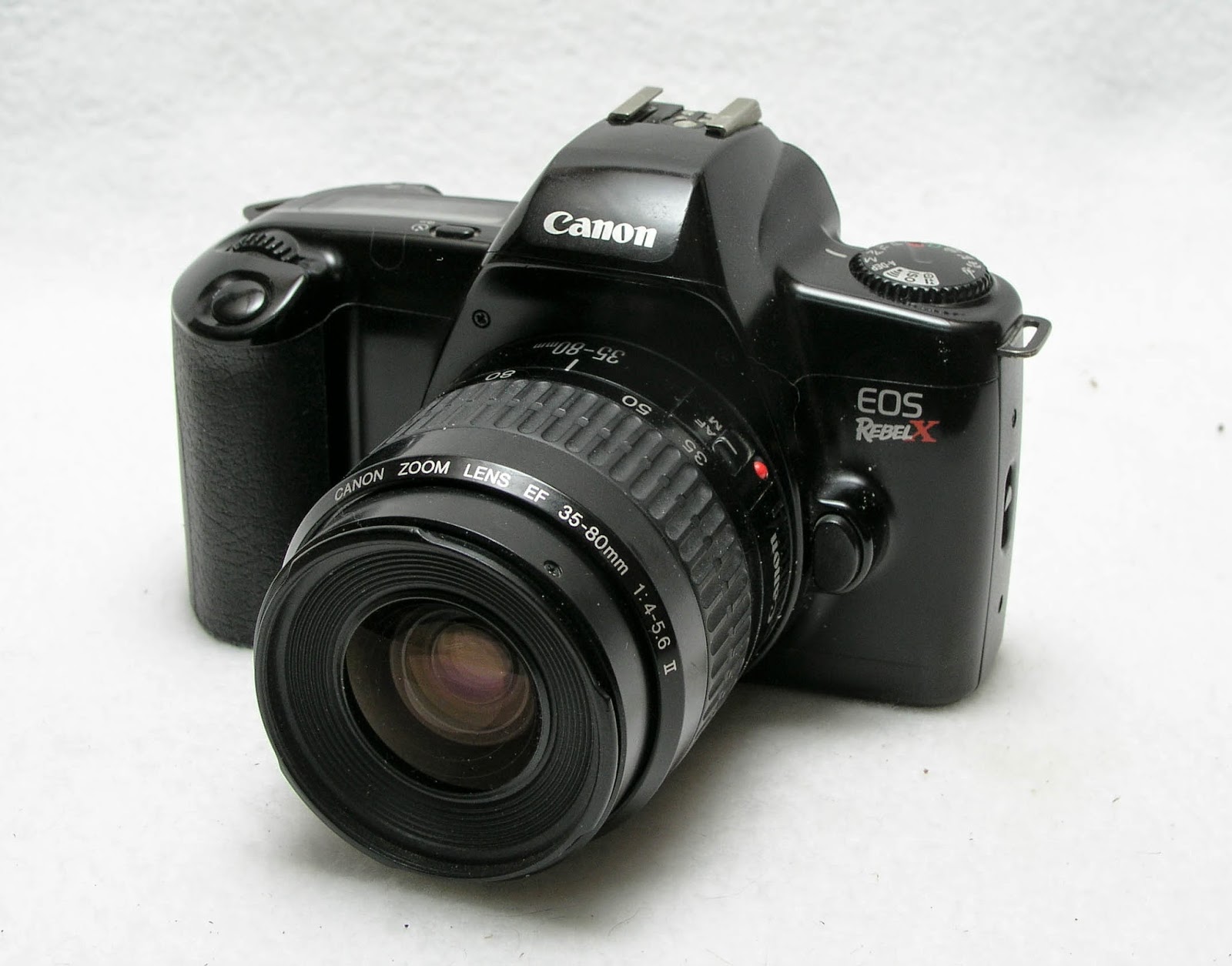 I was in the local thrift shop a few weeks ago and picked up this nice Canon EOS Rebel X 35mm SLR with the 35-80 kit lens for the sum of 10 dollars.  A decent pizza costs more than that.  Three bottles of wine can cost that at Trader Joe's.  A six-pack of beer can cost that.  Hell, a roll of film can cost $10.  Now, I have gone through my Canon EOS phase a while back, and sold off all the Canon gear that I had acquired.  However, seeing that lonely camera in the case for $10 made me buy it.  It was pretty clean, and only needed a fresh set of batteries (CR123)  and film.  The Rebel X (or at least THIS rebel X) does not have a built-in pop-up flash.  From the Canon Museum web site: "Based on the popular EOS Kiss marketed in October 1993, the Rebel X was for the North American market. The Rebel X did not have a built-in flash, auto date back, and metered manual like the Kiss. The Rebel X was 55 g lighter than the Kiss.." So, the camera is 21 years old. Wow. It still takes great photos, and weighs less than 500 grams. In fact, it is so light that it can be carried in the hand without fatigue. I have shot one roll with it, and am working on another. If you are a mostly digital user, and want to experiment with film, find yourself a cheap Rebel and use the lenses that you already have (except for the lenses that are only for APS-C DSLRs). So, for less than a dinner, you can find yourself a decent modern film camera with features that you are probably already used to on your DSLR. 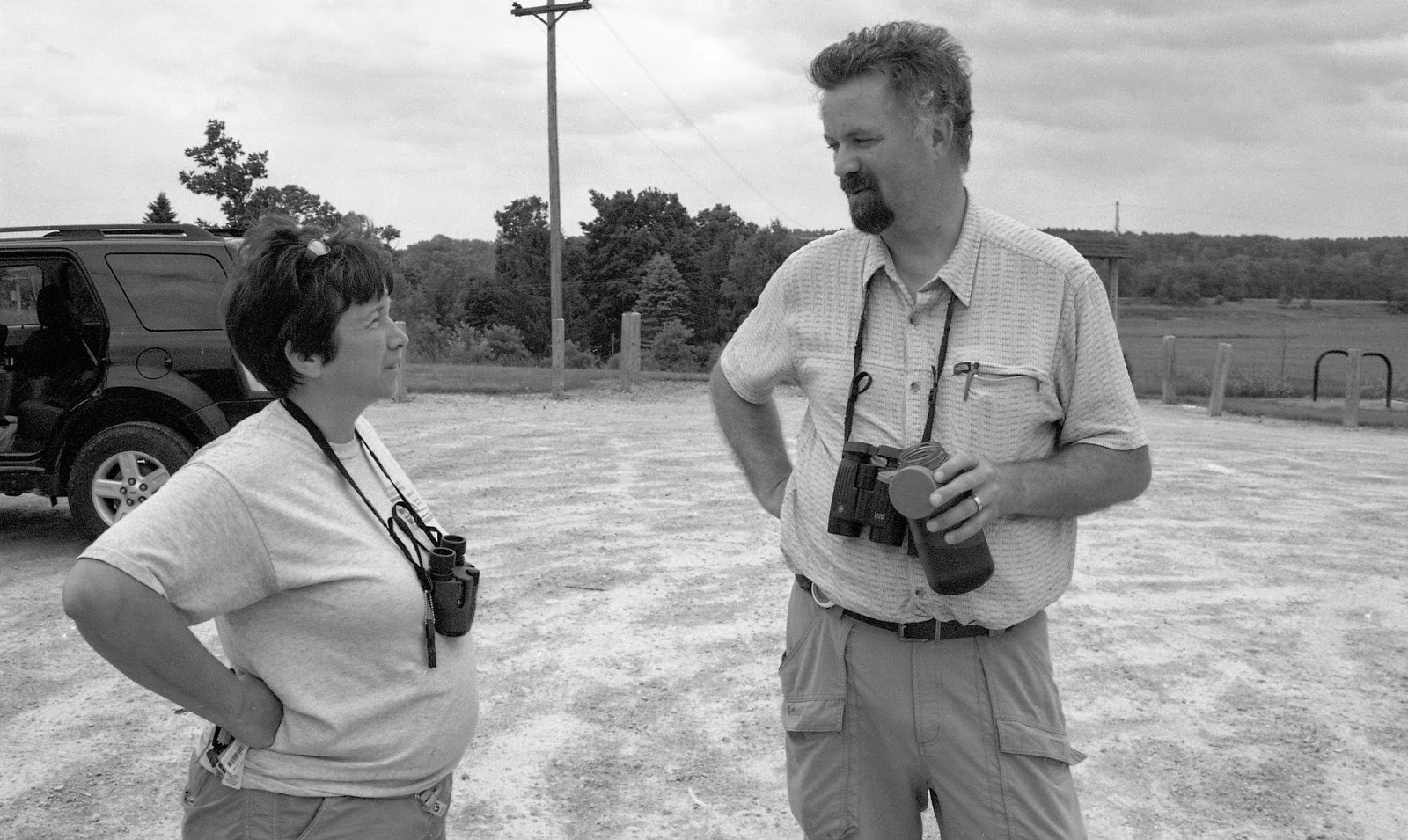 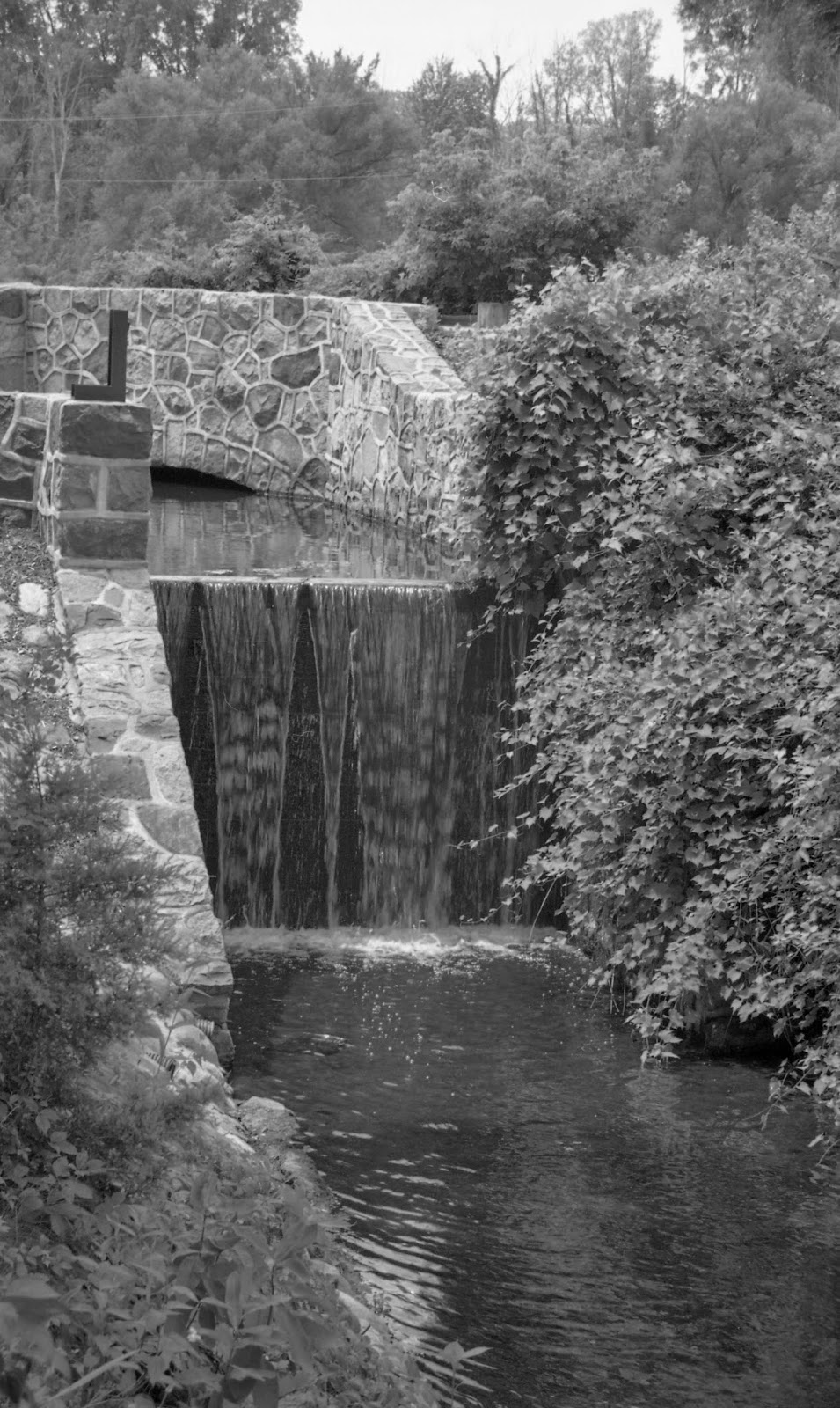 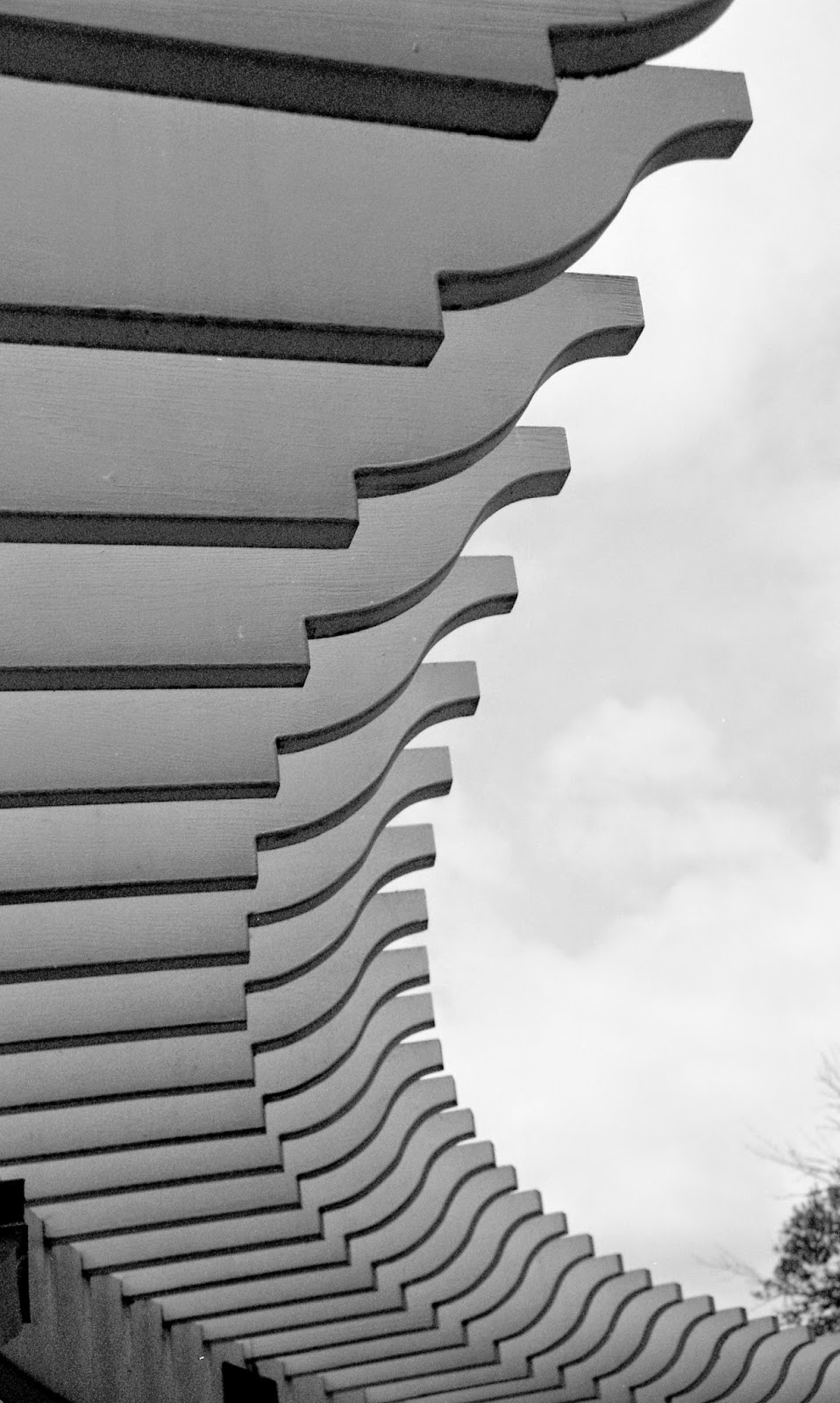 The camera just plain works, and remember, yes, it's not the camera, but the person using it--however, some cameras do make it easier to "get the picture." The EOS Rebel was a fantastic entry into using modern SLRs, and certainly still holds its own against later Rebels that appeared.

Thanks for viewing the 500th post of Random Camera Blog, and USE FILM!

Posted by mfophotos at 11:48 PM No comments: 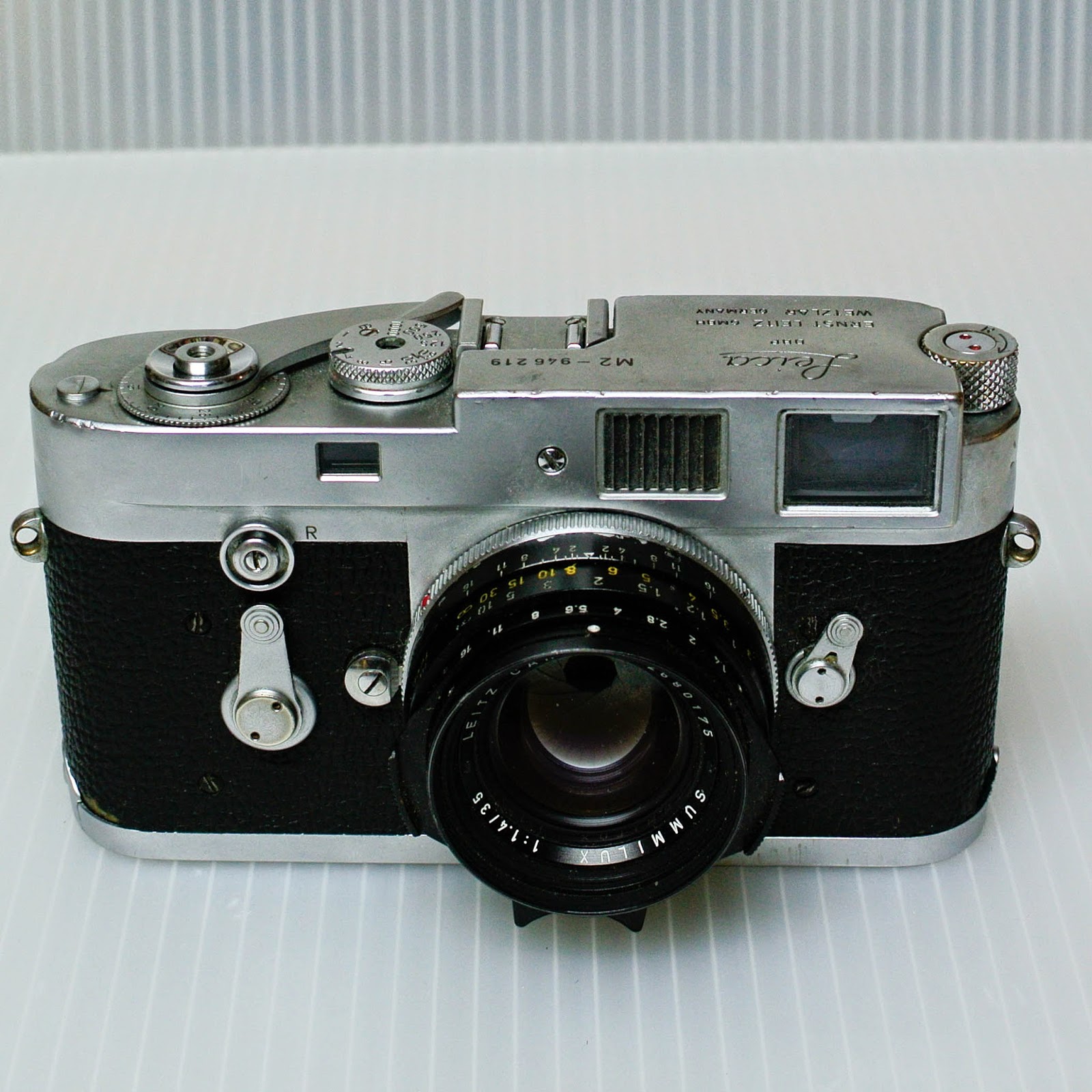 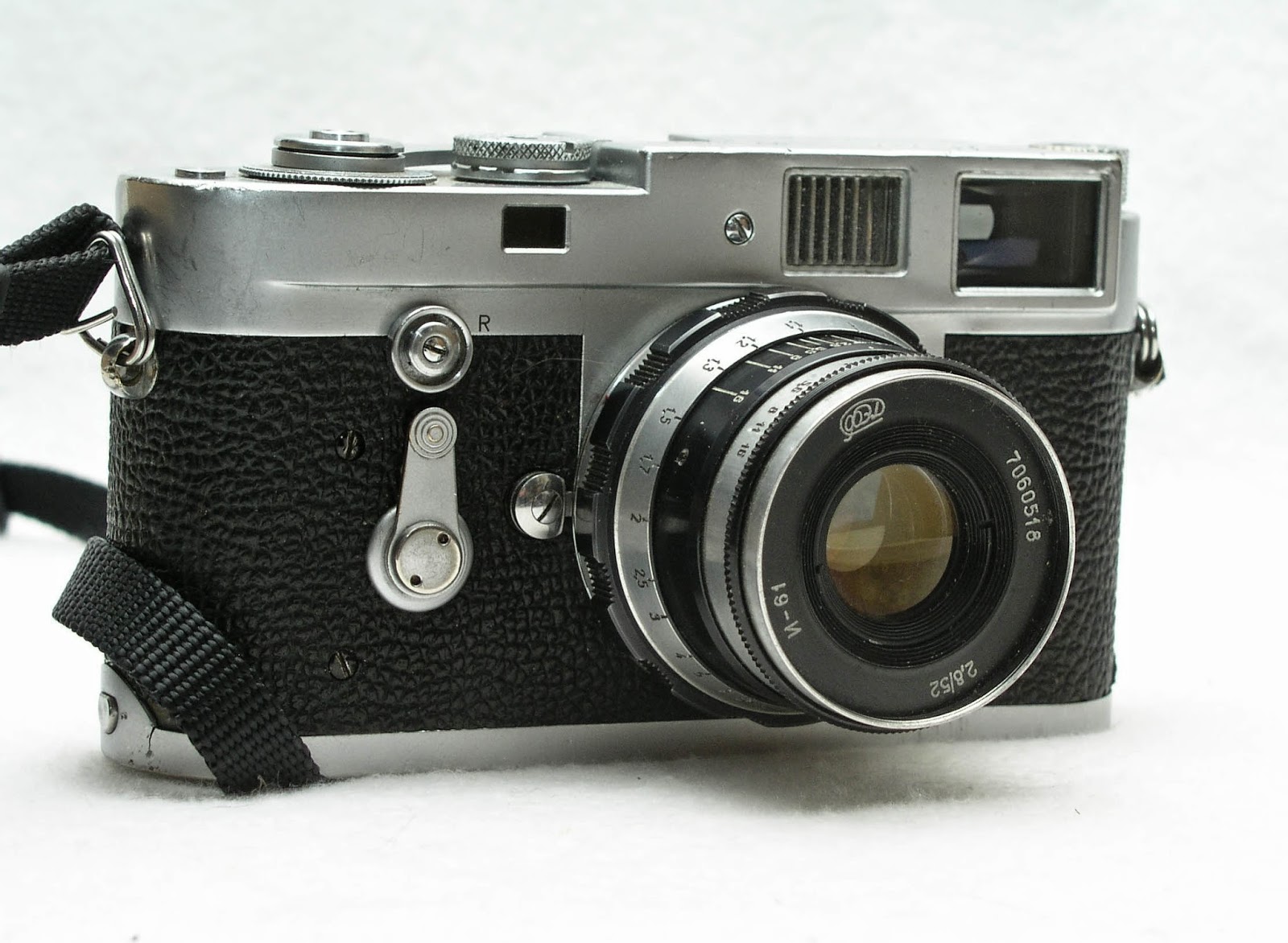 
Posted by mfophotos at 8:45 AM No comments: