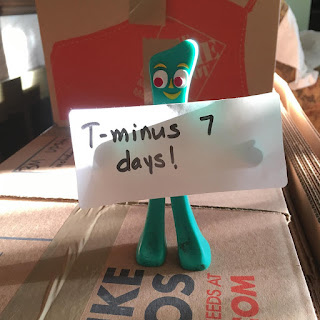 A week from today, we will be at our new home in Weaverville, NC.  The movers arrive on Thursday.  We'll drive down on Saturday.   Getting all of my stuff boxed up has been a process for sure, but photographically, it's all done.  I am looking forward to NOT boxing things up and unboxing them.  It will be a while until I have an opportunity to set up my space and darkroom at the new place, but that's okay.  There will be plenty to do in the first few months settling in, but I'll still be doing a lot of photography.

In the process of boxing up my photography library, I did cull more books out, but still ended up with 29 boxes (10x15x12 inches) to have the movers load.  Since I plan on never moving again, I am happy with that.  Packing up the many photographs has been fairly easy.  Most of my unframed work is in clam-shell boxes, and the framed work is well-boxed. I sure have a lot of binders filled with negatives, and after we arrive, I plan on going through the last 10 years worth and doing some printing as well as posting online.  I boxed up much of the RC and fiber-based printing paper that was in my darkroom -- it will get used down the road, and I am sure some of it will be given away when I am in NC.  My film fridge will get emptied the day before we move, and the film put into a cooler that I'll transport.  Most of my cameras are already in locked  plastic totes that will be handled by the movers.  I'll be driving down with a couple of camera bags, as well.

Overall, things have gone smoothly. We have a buyer for our Ann Arbor home, and we close on the NC home on July 17.  The next post you see will probably be from our new abode.

Email ThisBlogThis!Share to TwitterShare to FacebookShare to Pinterest
Labels: i shoot film, moving

Looking Back and Moving On

In two days, it will a year since my best friend, Marc Akemann, left this earth.  I still think of him, and he's still a part of my life.  I have been helping Coleen with Marc's photographic estate, and since I am moving soon, I won't be able to be as helpful as I would have liked to be, but I think my buddy Bill will be able to pick up where I left off.  Lately, I have had some time to scan in a bunch of film that Marc shot but never developed.  The Darkroom developed the C-41 and E-6 film, and I am slowly working on the B&W.  Now that all of my darkroom stuff is packed away, further work will have to wait until after we move.

One roll of film was shot in 2013, and the roll appears to have shots from two of our trips on it.  I think the following photos were taken at a motel in Mackinaw City or Munising. I think it's the latter, because we both are dressed for cooler weather, and one trip was in June (not cold), and the other, late October.  Any how, Marc had set up his Nikon FA to do self-timer shots of the two of us.  The actual sequence is a bit bizarre, considering that Marc is no longer with us. 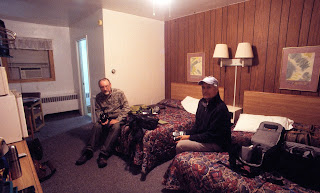 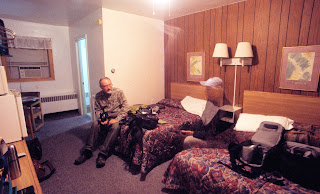 I know that it looks like I am talking to a ghostly Marc, but it's because he was not situated when the shutter fired.  Nonetheless, I think Marc would have agreed that he looks non-corporeal.

We will be moving to Weaverville, NC on July 20, assuming all goes as planned with the closing on the new house.  We also had great news this evening, as it looks like our house has an offer that will be acceptable to us.  So, I have been busy boxing things up during the past week.  The darkroom is empty, all cleaned up, and is clean enough to wash a baby in.  I still have many books to box up, and oh yeah, the rest of the house needs to be packed.  Our movers arrive on  7/18, and should be done on the 19th.  It's nice to not have to pack in a rush, and get things done in an orderly manner.

I am looking forward to moving.  Our new house is only 10 minutes from Asheville, and a mile from Weaverville.  After all this packing/moving/unpacking is over, it will be time for a well-deserved vacation!    We'll miss our friends, of course, as well as some things about Ann Arbor.  It will take a while getting used to our new state, and while I'll miss the beauty of the Michigan lake shores, I'll find new vistas and lots of nature in North Carolina to fill up my viewfinder.

Posted by mfophotos at 11:34 PM No comments: