Developing B&W Film. Just Do It.

It's been sort of interesting seeing some people in social media look for easy ways to develop film. Some people seem to think that there should be a shortcut for immediate results.  Others think that only a darkroom will enable them to develop film, and then there are some that want to develop the film in the canister, etc.  While I understand that there are inquiring minds out there, and there is always a guy saying something about "inventing a better way," I want to tell you this: THE NEGATIVE IS YOUR STARTING POINT.  DON'T FUCK IT UP!

While my comment above may seem a bit harsh, let me explain.  You will learn nothing about development if your first inclination is to short-cut a process that you know little about.  I get it, we all like things to be easy. But things get easier the more you do them and become more familiar with the routine.  Think about the first time you drove a car. So many things to watch for!  After a short while, you get comfortable with it.  After a long while, you hardly have to think about what you are doing, but you still have to pay attention.  It's no different with developing film.  You can't get to your destination without putting in the time.  You can't expect it to be any different with photography.  The negative is your base piece of information. Film costs money. Why would you want to potentially ruin an image that you took the time to compose and shoot. Does your photography mean that little to you?  Believe me, many have tried quick methods, "time-savers" for developing film, and those methods have been found to be a waste.  If they were not, they would have been widely adopted. But they were not.   Some of the reasons we see people wanting shortcuts are probably as follows:
(1) coming entirely from a digital background to film
(2) not being mentored by a film user, nor taking any class in traditional photography
(3) not reading any books about darkroom practice
(4) impatience and/or ignorance because of the above

So, you have some b&w film.  It's easy to develop if you keep things simple.  To start, use only one developer. Use only one type of film.  Then, when you think you have a handle on things, you can begin to explore other developer/film combinations.  Some people get so into trying many films and developers that they never really achieve a consistent result to know what actually works well. So, keep it simple and become proficient with one film and developer so that you know what a good negative looks like.  I have lost track of how many rolls I have developed, -- it's certainly in the thousands.  Even then, I do not get complacent.

You need:
daylight developing tank with adjustable reels (Paterson style tank)
dial thermometer
plastic jugs for developer and fixer. You can use water as a stop bath.
plastic measuring cups or graduated cylinders for mixing
sink with running water
timer
film changing bag or a completely dark space to load the film into the reels to be placed into the developing tank.

Some of these items are available at the Film Photography Project Store.

About chemicals -- Most b&w photochemistry is relatively benign, and except for used fixer, it is safe to dump down the drain.  Unless you are doing industrial volumes, that is.  I don't think that applies to any of us.  While I may say Kodak D-76, it's actually available more cheaply from Freestyle as Legacy Pro L-76 developer, which is what I have been using as of late.

You can download an app for your smartphone that will time your development process from the folks at the Massive Development Chart.  That will also save you time looking up development times online.

When I started developing my own film in 2000 after a hiatus of 26 years, I had just the basic equipment and supplies.  I didn't have a darkroom then, and used a changing bag.  I practiced a lot with a junk roll of film to get adept at loading it in the changing bag.  I used plastic reels then, and still do. They just work better for me --  thousands of rolls later, I still use them. 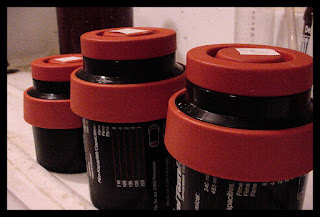 My recommendation for a film/developer combo --
Ilford HP-5+ and Kodak D76 mixed 1 part water to 1 part stock solution for 11 minutes developing time at 20 degrees C.    This makes the developer a one-shot use, and is quite economical.  That makes total time for development, fixing, washing at about 25 minutes.

There are numerous videos on  YouTube to show how to develop film.  Most are useful if you have not done it before. The Ilford pdf on b&w developing is also very useful.  I highly recommend The Basic Darkroom Book by Tom Grimm, but there are many other books available.

Once you have your negatives dry, you can scan them and do whatever post-processing you wish. Or, you can print them in a darkroom, which is a whole chapter by itself.  Store your negatives in strips in the PrintFile Archival preservers. I use the sheets that hold 7 strips of 35mm, 5 across.  You may like the ones that hold 6 strips of 6 across.  I use the 120 sheets too.  Store them in 3 ring binders.  label them so that you know what, when, where, why, and how.  Keep a notebook and record your developing.

Does this sound like a lot of work?  It really is not.  But if you are unable to develop at home, you can send it out to The Darkroom and they will do it.   However, you are missing out at one of the things that makes film photography special. Take the time to do it yourself, and you will see and appreciate the magic.

Lately, I have been developing my own color transparency film (E-6) as well as C-41 color negative film.  Doing color transparency (positive) film is pretty straightforward with the easy to obtain Unicolor E-6 kit, which can be purchased from the Film Photography Project Store as well as Freestyle and other vendors.  I have the 16 oz kit, which does a minimum of 6 rolls of 35mm film.  The process is simple -- mix up the chemicals as directed, and you end up with three bottles -- First Developer, Color Developer, and Blix.  There is a pre-wash and a rinse cycle between each step, followed by a last wash.  Temperatures can be a bit lower than the C-41 kit, with adjustments made in the length of development times.  However, the First Developer step is the critical one for the timing, and you will need to increase the length of time for each additional roll you develop, as the chemicals are re-used.  The kits instructs you on this point, but it's easy to forget if you set things aside for a while and forget about the previous rolls.  Put a piece of tape on the First developer bottle (and yes, you DID label them, right?), and put a tick mark for each roll you develop. The Color developer and the Blix apparently do not need the same compensation.


Once you get your first roll done and see the color positives on the roll, you will be hooked.  At $31 for a quart kit, you'll get over a dozen rolls of 35mm film processed.  At the going rates for mail-order labs, you'll save yourself over $100.

What about mounting the transparencies?
The only reason to mount them is if you are projecting them.  I have thousands of mounted slides in my files, and I only occasionally have projected them.  It does make it easy to handle individual frames, and the slides are easy to file and label.  However, most of my recent E-6 film is stored in the typical plastic 35mm pages that we put negative strips into.  After I scan them, it's still easy to hold the page over the light box and examine the sheet.

My last roll was definitely color shifted to the blue side, and I think it is because it was roll #6, and I had not compensated for the used developer in the First Developer step.  It should have gotten at least another minute. 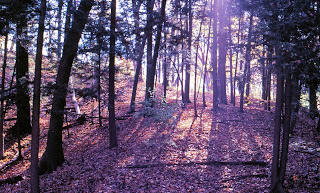 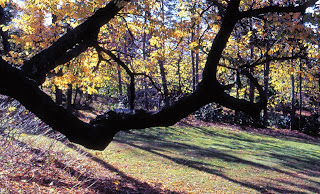 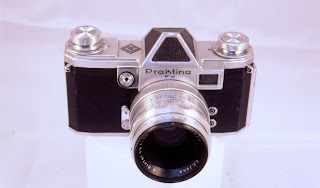 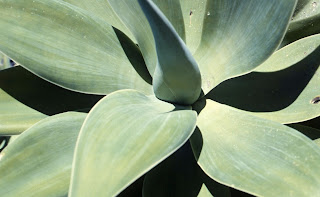 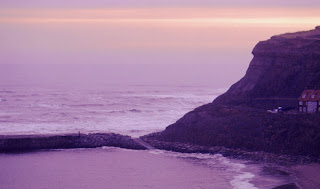 I am still developing some film that I shot in Berkeley, CA almost a month ago.  This latest roll of Ilford HP-5+ was finished up a couple of weeks ago in Arbor.  I may have stated it before, but HP-5 has become my favorite 400-speed film.  This roll, developed in the last of my remaining Kodak HC-110, came out with beautiful gray mid-tones.  The Berkeley shots were taken between 7:30 and 8:30 am, and it was great getting out of the hotel and walking around with a camera before things started getting busy.

Here are a few for your enjoyment. 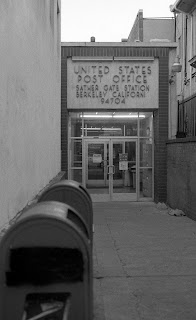 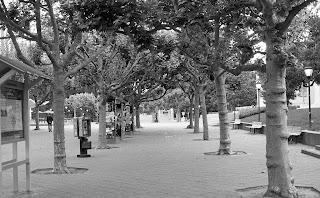 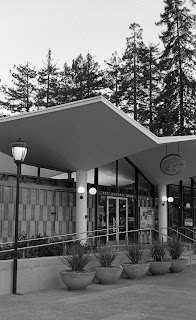 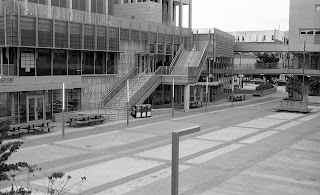 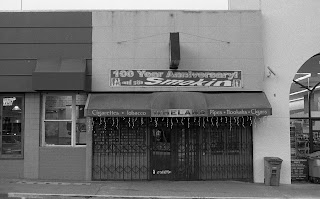 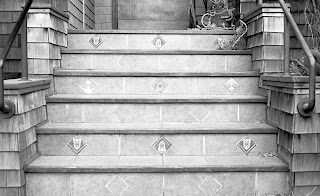