Earlier this month, Adrienne and I went out East to visit family as well as my visit to Yale for a conference. It was a bit warmer there than in Ann Arbor, so I was eager to go out and do some exploration and shooting. We drove over to the "hamlet of Wassaic", which is about 5 miles from the farm house where Adrienne's mother still lives.  I forget how beautiful and wonderful it is to have mountains and valleys, having lived in Michigan for 33 years.  Dutchess County, NY  is filled with small communities and is quite rural over much of the county.  However, its only a couple of hours by train from New York, and Wassaic is the N terminus for the commuter line that goes into the big city.  Located in a valley surrounded by mountains, it is said that the community has the least amount of sunlight as the mountains flank it on the East and West.    Despite its small size, it once housed the first evaporated milk plant, built by Borden in 1861.  That building still stands, and is owned by the Pawling Corporation, which has a visitor's center there.  Wassaic has a vibrant arts scene, as evidenced by the former Maxon Mill, which has been concerted to an amazing artists' space with galleries and studios.  The Wassaic Project looks to be a pretty cool thing, and if I lived nearby, I would certainly look into it.
It was a thawing March day, which was a relief from Michigan's weather.  We drove around and Adrienne also enjoyed seeing things she overlooked while growing up so close by.  It is true that we take so many things for granted when we are young, and going back to a place much later is like seeing it for the first time. I shot with my Nikon F100 mostly using my 24-120 Nikkor AF zoom with Tri-X and Arista Ultra 100 (perhaps Fomapan?).  The film was developed in D76 and scanned.   I am pretty happy with what I got there in such a short time.  It would be nice to go back when things are green and see more. 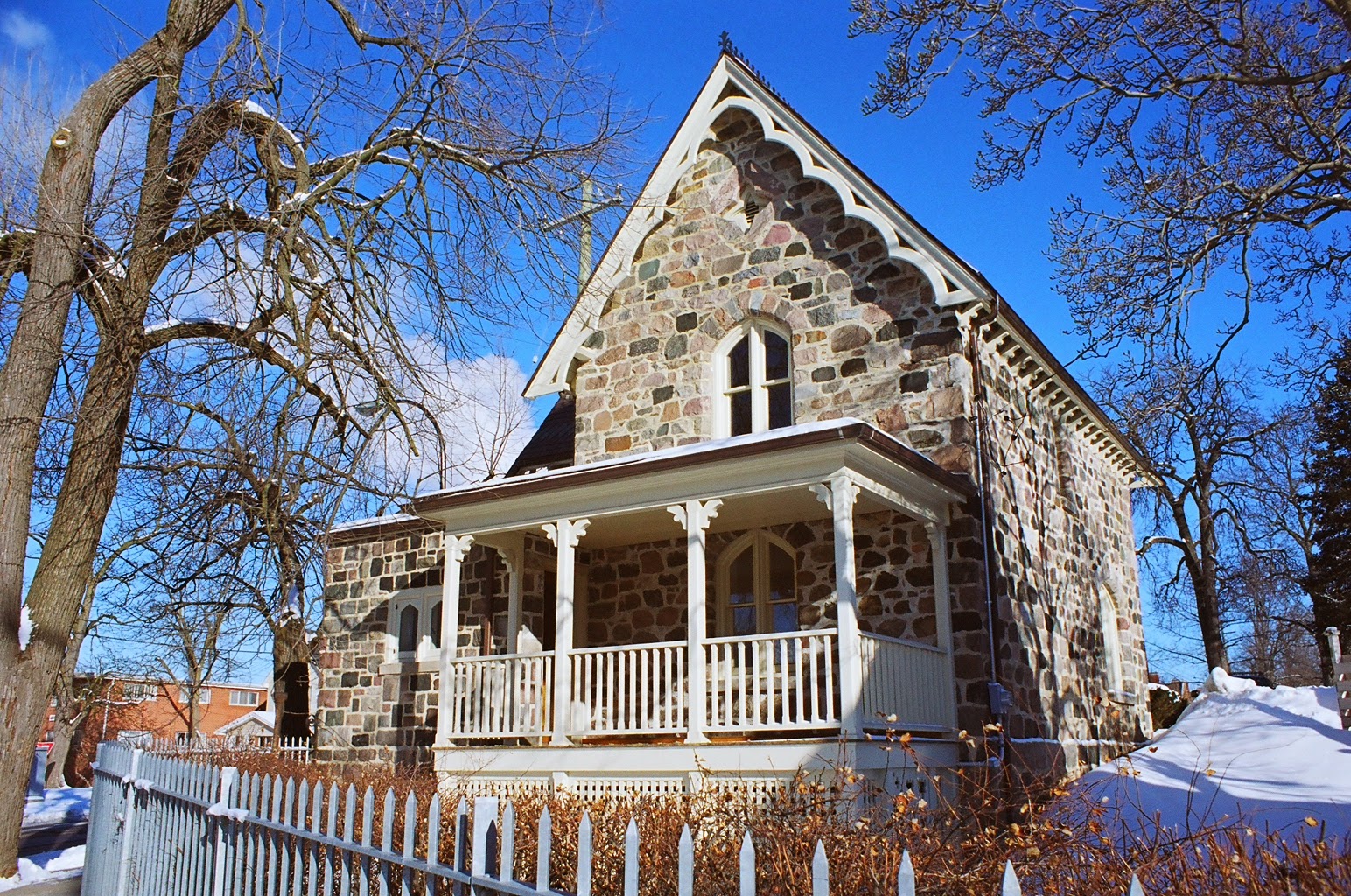 A few weekends ago, I picked up a boatload of film at an estate sale (posted here).  I was anxious to try out the 35mm Fuji Reala, as I remember it being a very good color film.  I put a roll of it into my Nikon FM2N and used it with various lenses, all in a couple of days at work and one lunch hour downtown.  I sent the roll off to The Darkroom in California, and last night, I received the news that my film was on its way back, and that the scanned negatives were online.  I shot the Reala at the box speed of ISO 100, since by doing that, I would have a better idea if it had degraded over the years since its expiration date of 1997.  It has been refrigerated the whole time, I believe, and not left in the glove compartment of a car (which is a problem with expired films of unknown provenance-one usually has no idea how it was stored).  The exposures look like fresh film, with nice saturation and no apparent graininess.  Shadow detail is good, too.

Posted by mfophotos at 9:29 AM No comments:

Photography of a Different Sort


My day job isn't that of being a photographer, although I do use photography in various forms to accomplish various tasks.  I am the Insect Division Collection Manager at the University of Michigan Museum of Zoology in Ann Arbor, MI.  Besides the 3.5 million specimens, we have various ancillary items such as photographs, transparencies, maps, journals, field notebooks, and other analog recordings that are part of the collection.  Last week I attended a workshop at Yale, under the iDigBio program.  The workshop, "Digitization of Source Materials" was intended to share information and provide a set of documents relating to the why and how we digitize (making non-digital items available digitally) our archives and non-specimen objects in our collections.  It is a different sort of protocols, as we want to be consistent in our workflows and end-products and the way we want people to access them.

Consider a photograph.  You can digitize it by placing it on a flatbed scanner (easy) or by photographing it with a digital camera (usually more cumbersome).  Once you have it scanned, you need to add metadata that describes the image, catalog it so that the object is unique, and make it accessible via whatever software is used.  Think of uploading a photo to Flickr and not labeling or tagging it.  It would be hard to find again. Same thing for digital archives of any sort.  Now multiply that by potentially many thousands of items in a collection, with different origins (bound notebooks, photos, etc.,)  and you can see why some standards and protocols need to be addressed.


While at Yale, I was delighted to be able to see their digital imaging labs that are used by the museums there.  Imagine a large room with walls at 18% gray, a catwalk, and all the tables and lighting one may need to get the job done -- I was prcatically drooling.   Then, they showed us a machine with 2 cameras that allows them to photograph up to 1600 pages per hour -- automatically.  Very, very cool.


Photography amounts to making an image on some recording surface, and whether it is film or a sensor is unimportant in terms of the technique in getting the object photographed.  The post-image work is certainly quite different, though.  It is the ability to do so many amazing things with digital images that makes the museum work so important.  We can share our resources with the rest of the world, and in doing so, we are making research on so many things much richer in content.

It was great seeing the wonderful work space at the Yale digital imaging studios.  Any photographer that shoots in a studio setting would love that space!


It was also good to see a university where scholarship is valued over athletics, substance over hype.   Okay, so you say it's Ivy league, not the Big "Ten".  The Big can't even count right.


Posted by mfophotos at 1:11 PM No comments:

On Saturday, my buddy Marc Akemann and I  were alerted to a local estate sale that featured some darkroom equipment.  Before I went over, I looked up the sale online, and sure enough, amidst all the other things in the house, was a darkroom and a fridge FILLED with film.  I hadn't heard of anyone recently  passing away that I knew, which is perhaps why this sale was a surprise.  We went over and in the span of two days bought a large amount of film and some books and other things.  It turns out that the house belonged to  Stanley C. Livingston, a local photographer that passed away suddenly in the fall of 2010.  I did some looking up of Mr. Livingston and found out that he was a professional photographer of note that was the author of a book titled Blues in Black and White. Unfortunately, Stanley died of a heart attack in 2010, the year the book was published.  I didn't know any of this before I went to the sale, and the walls of the house had many of his photographs from various parts of his career, which spanned the 1970s - 2010.  based upon what we found there, it was obvious that Ann Arbor was a hotbed of photographic creativity in the late 70s to mid-1980s.  There was a quarterly tabloid-sized publication called Photoworks, that Marc found a complete set of at the sale, and I look forward to perusing the pages of those issues.

In talking to the folks running the estate sale, I learned that Stanley's extensive and expensive gear had been sold several years ago, but the downstairs and basement was filled with all the types of things any working pro would have acquired over the years -- backdrops, seamless rolls, matting and framing supplies, chemicals, props, darkroom equipment...and film.  I ended up spending about $150 on film - much of it expired, but all refrigerated.   I was pleased to score DX-coded versions of Panatomic-X, as well as Kodak HIE, Konica 720 IR (120) film, tons of Fuji  Reala, Kodak Vericolor II and III, T-max, and Tri-X, as well as many other films in 120 and 35mm and 127! 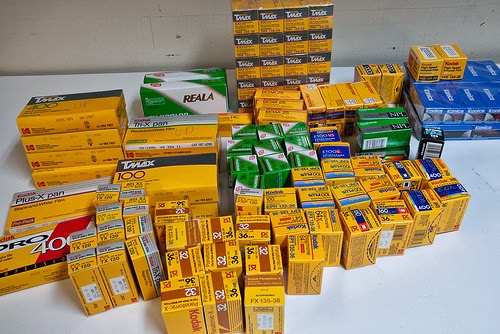 While we were certainly happy to benefit from the film score, it was hard not to wonder about the photographer, and what he was like.  I did a search, and there were many really nice testimonials on a web page where he had an obituary.  He was an Ann arbor townie, and widely respected for his images of the blues and jazz musicians.  He also loved photographing in the Upper Peninsula of Michigan and had a cottage in the Keweenaw.  He sounded like someone that was a good mentor, and probably was friends with Jeff Lamb who died 2 years ago.   By all accounts Stanley C. Livingston was great guy and photographer, that died too early.

So, I will use much of the film that I bought, and am glad that it didn't go into a dumpster.  Those rolls of Panatomic-X are going to be shot by me, thanks to you, Stanley.


Posted by mfophotos at 1:13 PM No comments: