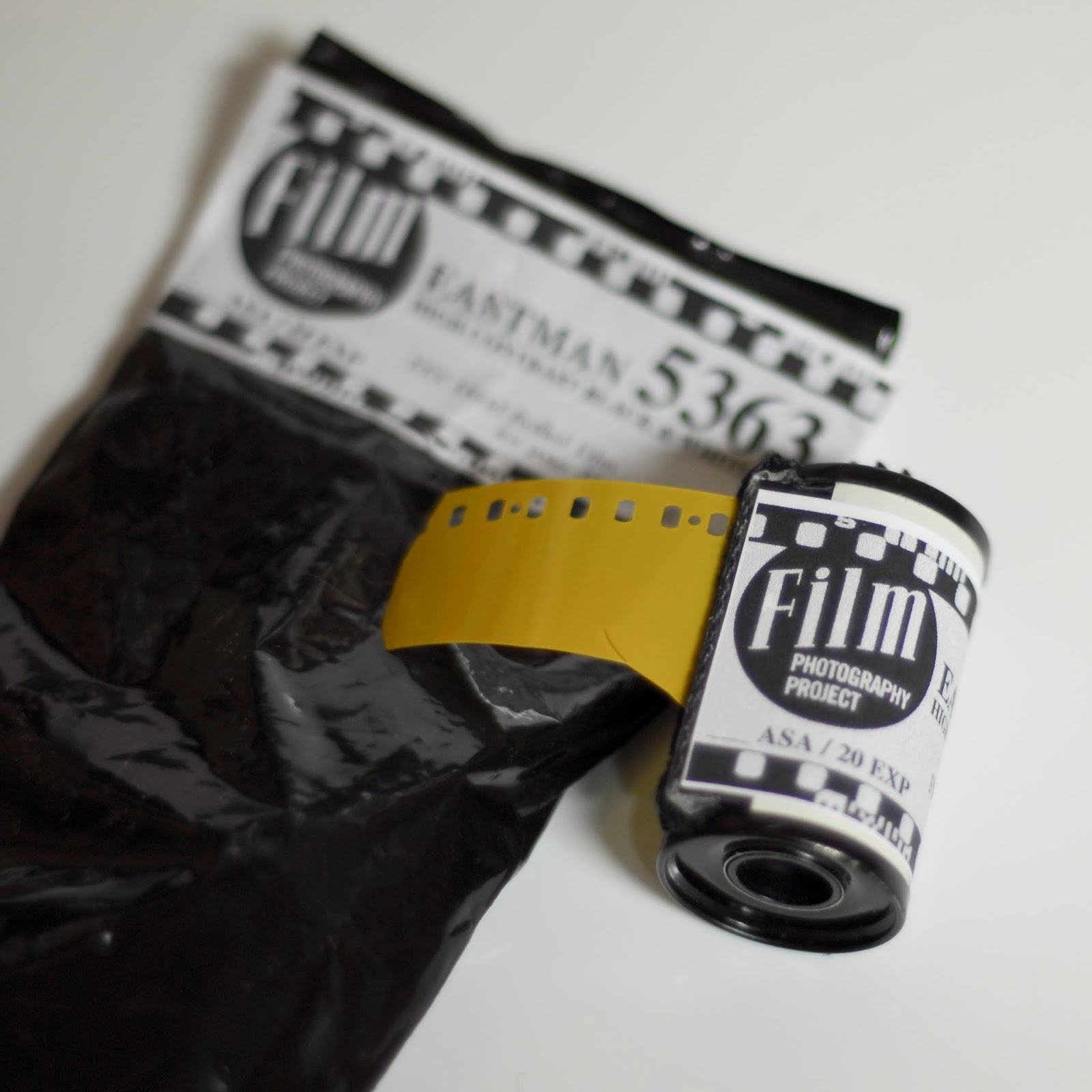 Back in December, I received a surprise package in the mail from the Film Photography Project.  Three rolls of Eastman 5363 b&w to try out.  Now, Mike Rasso must know that I have tried all kinds of crazy b&w films intended for copying, graphics, and other high-contrast applications. But 5363 was a new one for me.   The data sheet states:
"EASTMAN High Contrast Positive Film II 5363 and 7363 is a medium-speed black and-white positive ﬁlm that is suitable for making both positive and negative titles. It is also useful for production of printer effects, such as silhouette and traveling mattes. This blue-sensitive ﬁlm is characterized by high contrast, excellent sharpness, and very high resolving power."

In other words, "This is not a film for general photography" -- or is it?  Part of the problem with using these oddball films is that outside the cine world, we do not see them used much.  If you have Tri-X, why use something like Eastman 5363?  The answer is -- it's the challenge of seeing what happens.  Unfortunately, the data sheet does not give one much hope for other uses, so others have been experimenting with developers and what the native ISO of the film really is. Seeing the term "medium speed" baffled me, - compared to what?  Is it ISO 100?  Based on reading what the FPP folks have been doing, I started with ISO 25.  Roll 1 was shot with my Nikkormat EL -- perhaps not the best choice, but it worked.  I compensated for the snow in some shots by shooting manually, in others, I left it in full Aperture Priority.
One interesting thing is that this is the first time that I have seen registration holes in addition to the perfs in a film.  Development Notes -- I developed the 5363 in Kodak D76 at 1:1 dilution for 12 minutes, as provided by Mike Rasso's notes.  It could obviously be a shorter development time, but like any of these oddball films, there is much room for experimentation.  I think if one has Technidol LC or Photographer's Formulary TD-3, it would be worth trying out.
Based on the negatives from this first attempt, I'll try some less contrasty subjects, and a different developer...perhaps Technidol LC.   Unlike a lot of high-contrast films such as Kodalith, TechPan, High-Contrast Copy film, which are for still cameras, these cine film stocks are always a challenge, because they do not see much use outside their industry.  With the demise of analog titling and effects, they will probably pop up in the market more frequently.  I don't know about 1000 ft rolls, though.  That would be more than a lifetime supply for anyone. 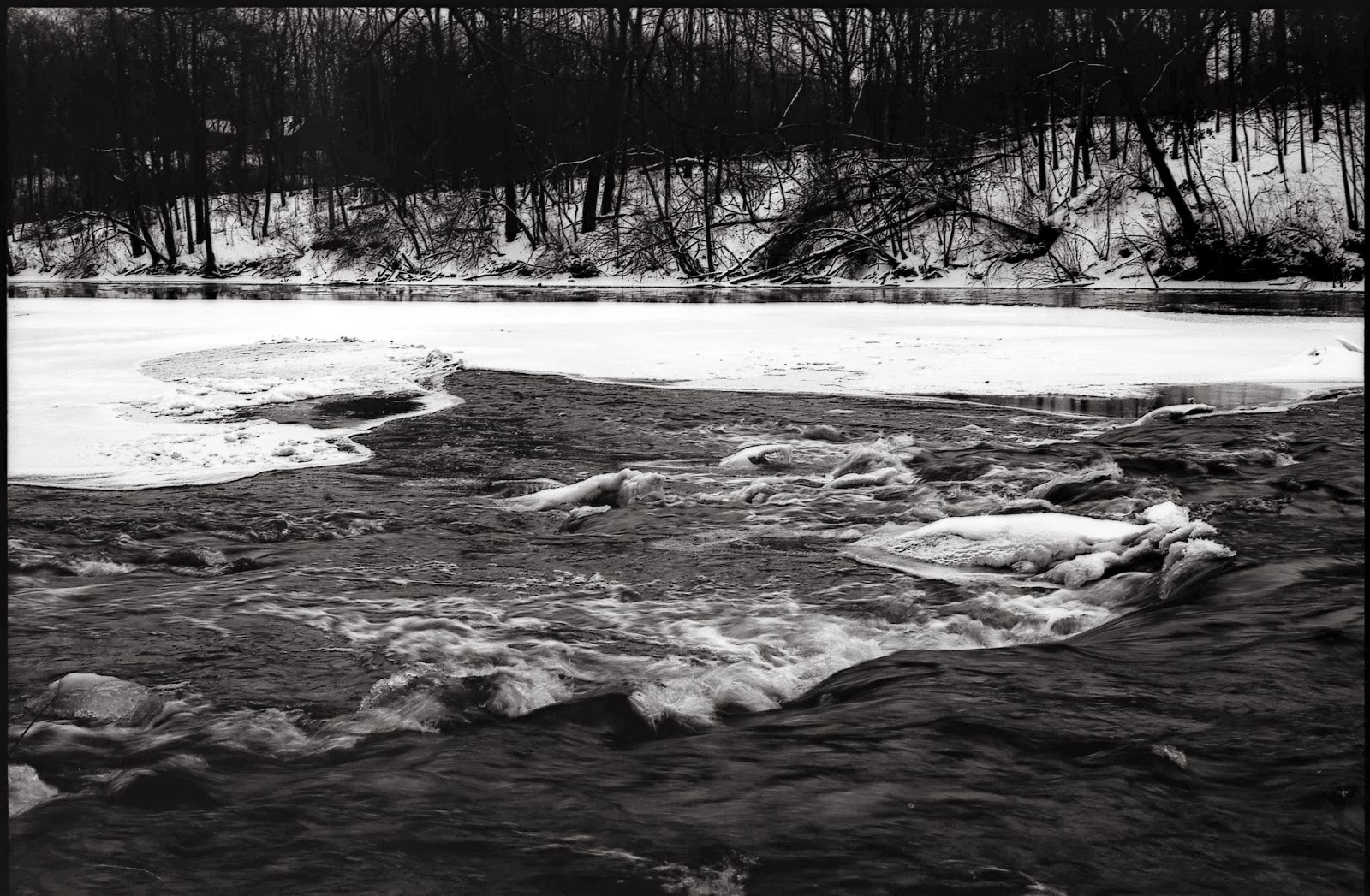 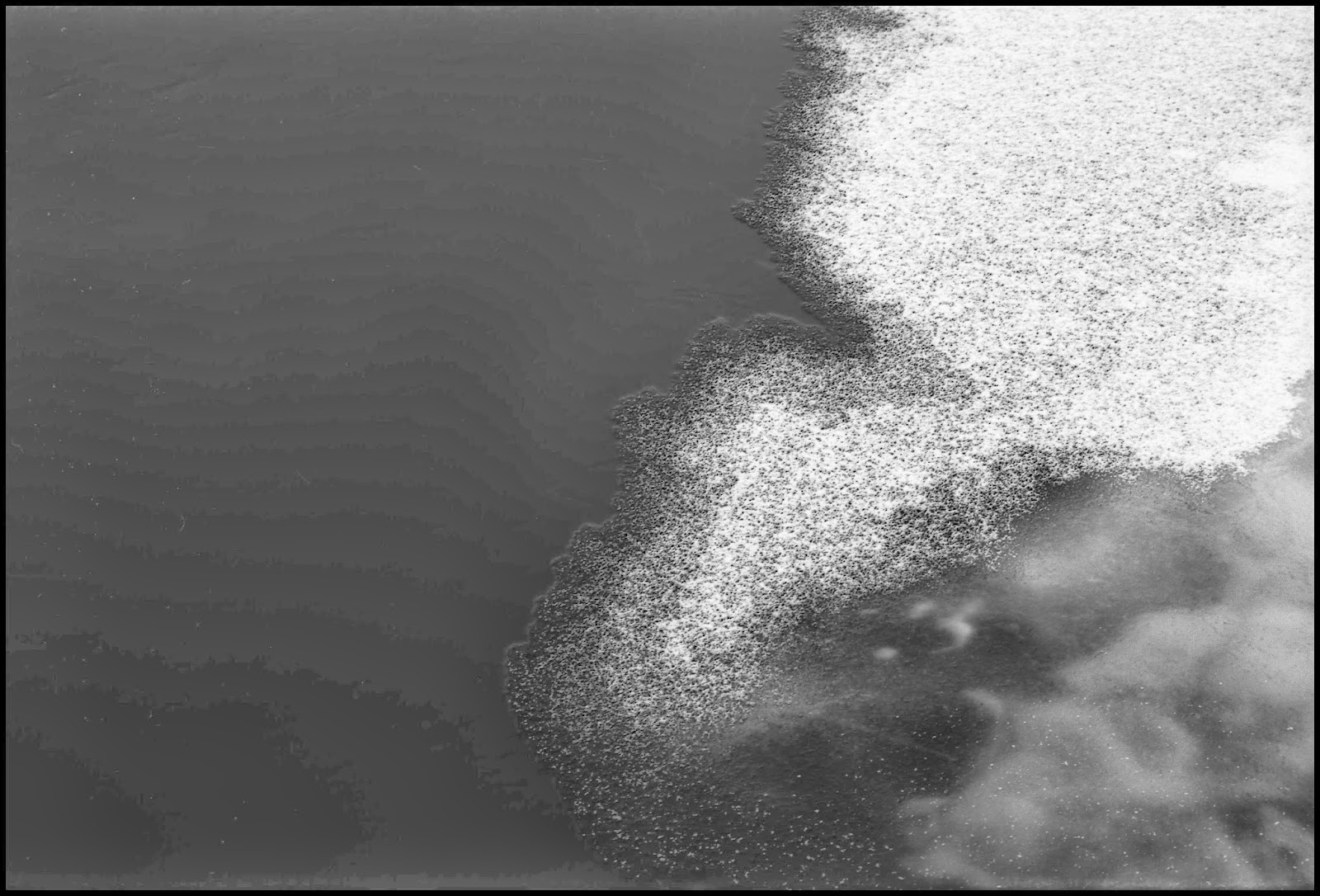 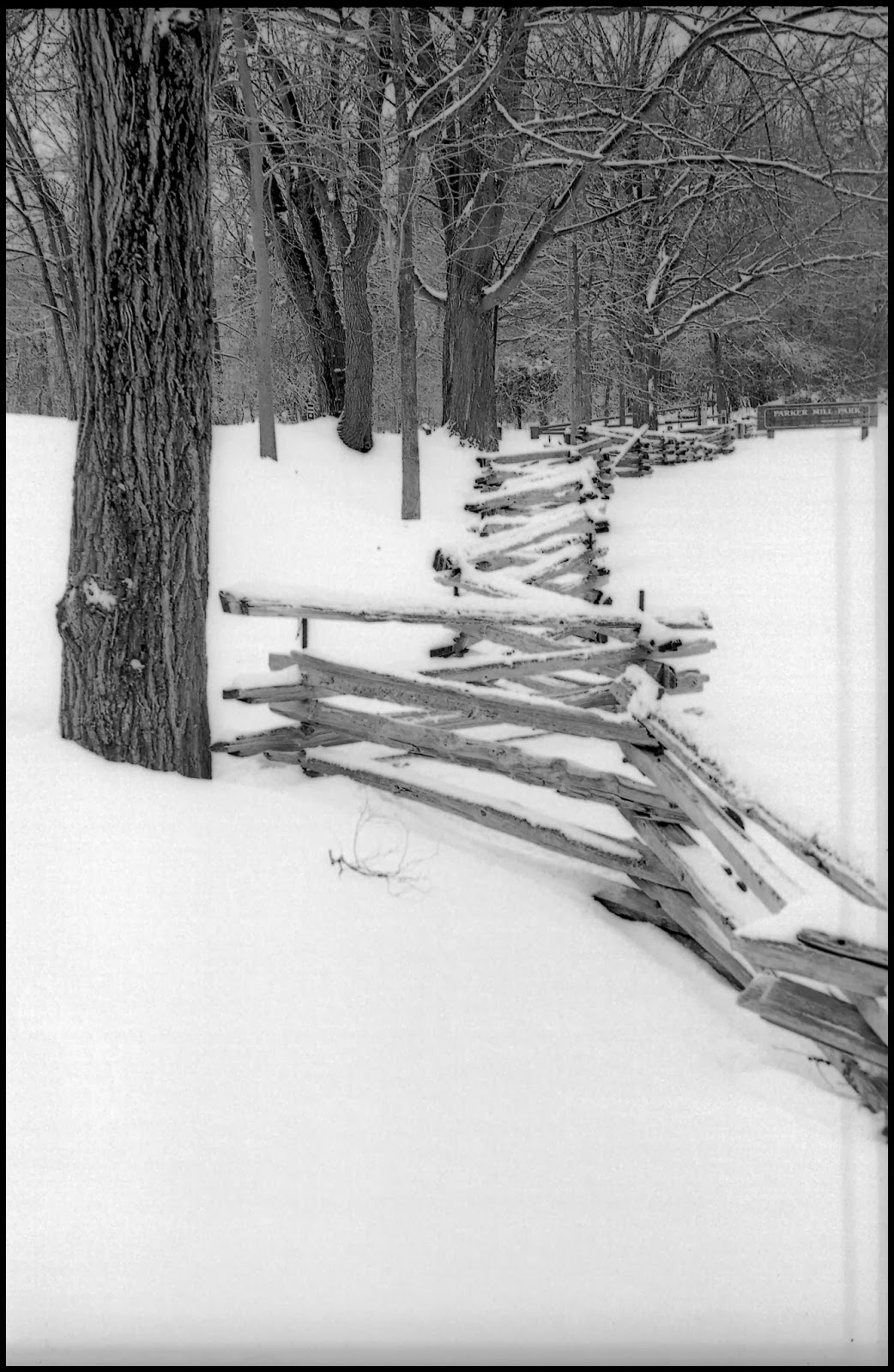 Posted by mfophotos at 1:08 PM No comments:

Although we have been having one of the snowiest and coldest winters on record in Michigan, it seems silly to complain about it, even though we do.  I think winter is one of those things that defines those of us that descended from Europeans.  We survived the Ice Age.  We will survive winter in the Great Lakes. Of course, our lives are far more complex than those of our ancestors huddled in caves and hide tents during the glacial period, but I suspect that any of them could cope with today's life better than we would if we were suddenly plunked down at the edge of the glaciers. However, they did get to share their back yards with cool megafauna...

So, winter offers us opportunities to explore a world that is quite different from what we see the rest of the year.  One can go to the micro world, and explore an individual snowflake.  Shown here is a photomicrograph of a snowflake by Wilson A. Bentley, a Vermont photographer who found that he could attach a camera to his microscope to obtain photos of his favorite subject.
"In 1885 he successfully photographed the flakes. This photomicrograph and more than five thousand others supported the belief that no two snowflakes are alike, leading scientists to study his work and publish it in numerous scientific articles and magazines. In 1903 Bentley sent prints of his snowflakes to the Smithsonian, hoping they might be of interest to Secretary Samuel P. Langley." (quoted from the Smithsonian archive record for Bentley's images).

So, in essence, Bentley not only embraced winter, it was the only time that he could do those images. Going back to the old saying "If life gives you lemons, make lemonade."   So, while I may not enjoy the limitations that winter weather gives me - as in bad driving conditions, salt and crud from the streets and roads, and that my heating bill this winter will be a doozy, the snow and ice afford me an opportunity (many, it seems) to do different things than the rest of the year.  I could stay inside, and hang out in my cave, doing studio shots, and still-lifes, or I can go out onto the glacier and see what I can find.
Although winter photography is often challenging because of the cold... and cameras and fingers do not always work so well cold, imagine how much harder it was back in the day when people were using view cameras, glass plates, and did not have Gore-tex, Thinsulate, and other modern fabrics to keep warm. 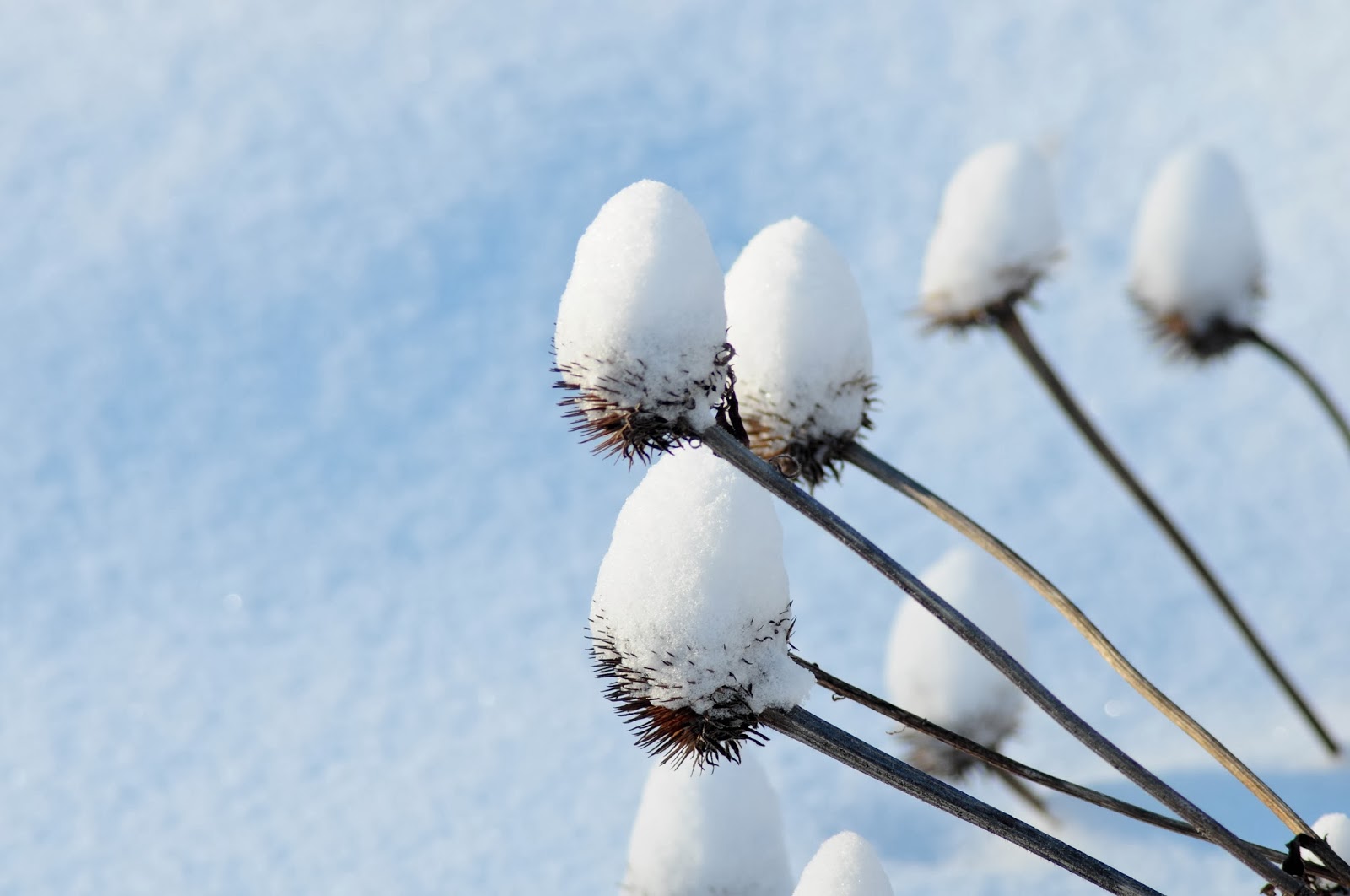 While I enjoy shooting black and white in the winter, largely because it is such a monochromatic landscape, color allows for the nuances on the snow that don't show up in monochrome.  I will admit that shooting digital is often easier in cold weather than shooting film, so long as your batteries hold out.  The Li-on batteries in today's DSLRs do quite well in the cold, and keeping a few extras in a warm pocket make shooting pretty easy.  However, if using a film camera, I go for simplicity and easy control - which means the Nikon F2 and FM2N.
Winter is also a good time to experiment with high contrast black and white films such as Kodalith, Techpan, and all the other oddball films that are still out there designed for high contrast work.  I know I have posted here previously on using such films, so take a look through my archives.   About the only thing I have not tried in winter is shooting models in the snow.  That seems like a way to torture someone. I know I would not get naked in the snow, so why should I expect someone else to?  However, take a look at Craig Blacklock's "Lake Superior Nudes" - some people are just tougher, I guess.  His and her ancestors must have been from the edge of the glacier.

Posted by mfophotos at 9:02 AM No comments: