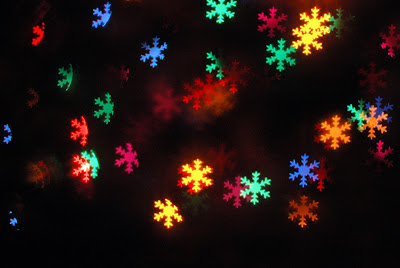 The Christmas holidays are a great time for photographic fun with the lights on the Christmas tree, candles, and other holiday lighting displays.

If, like me, you live in a northern climate where December nights are usually cold and snowy, indoor tree lighting is much preferred. There are some tutorials available on the web that show you how to create overlays in front of the lens with cutouts that act as the aperture, and combined with a fast lens (large maximum aperture - i.e., f/2 to f1.4) you'll get the out of focus (OOF) highlights with the same shape as the cutouts. Popularly called bokeh, these OOF shapes are the same shape as the aperture -- usually circular in a good lens. However, by using these cutouts in front of the lens, you'll get bokeh the same shape as the cutouts. 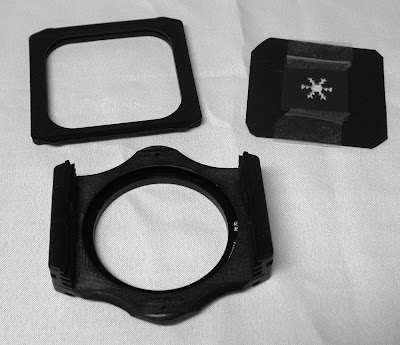 My technique differs from the other ones online. First of all, I decided to use a Cokin filter holder to place the cutouts in front of the lens, rather than cobbling something together with tape. Use a gel filter-holder in the Cokin filter unit to fold the piece of black paper that we'll use. 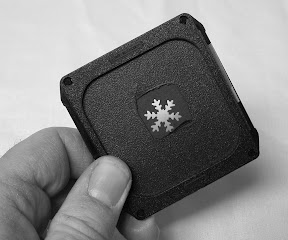 Second, instead of cutting my own holes with an sharp hobby knife, I used punches easily found at craft stores. For the snowflake, I used a 15mm wide snowflake punch that I bought at Michaels' for about $3. Since these punches can only go so far from the edge of the paper, I found it was easier to cut a square into the larger piece of black paper and then tape the smaller piece of paper with the punched hole over the square, and then place that into the gel-filter adapter on the Cokin filter holder. This is really pretty quick and easy, allowing you to experiment with different shapes - either done freehand or with a punch. 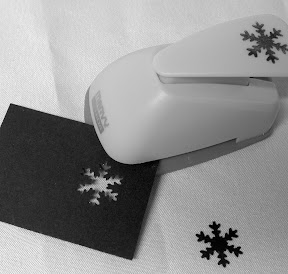 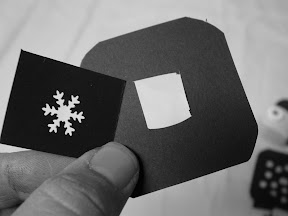 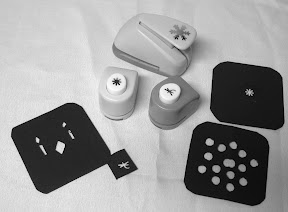 If you don't have a Cokin filter holder -- they are easily available online from B&H, Adorama, and Freestyle Photo (and ebay). They are cheap, and allow you to also use a multitude of cool filters on your SLR (which are beyond the scope of this blog post for now). The filters typically have a ring that you screw into the front of a lens -- 52, 55, 58 mm are typical sizes for filter rings. Make sure you get the right size to fit your fast PRIME lens (not a zoom). Your lens can be a 50mm focal length or 30, 45, 60 or 85mm, but the WIDEST aperture should be f/1.8. 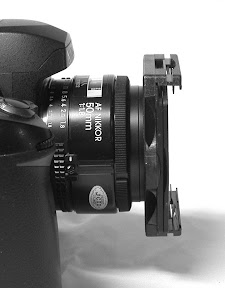 The color photo was made shooting wide-open and with the tree and lights completely out of focus. That gave me the large snowflakes. If you shoot a subject close-up with OOF highlights in the background, you'll get a nice effect.

The key here is that the snowflake pattern acts as the aperture, and 15mm is a good choice for the aperture size. Experiment with multiple shapes on the same piece of black paper, or repeated identical shapes, for different effects. You'll need to focus manually here, because the AF won't be able to focus with the shaped cutouts in front of the lens. 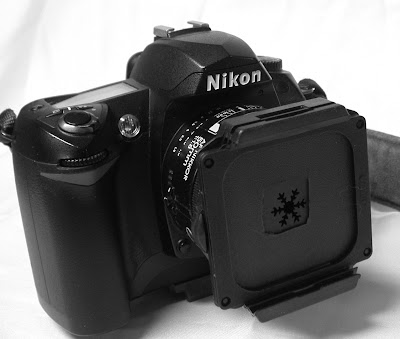 If you need to do this RIGHT NOW and can't wait for a Cokin holder, you can always use some gaffer's tape to hold the black paper mask in place in front of the lens. Not as elegant, but it works.

Happy Holidays!
Posted by mfophotos at 8:05 PM No comments: 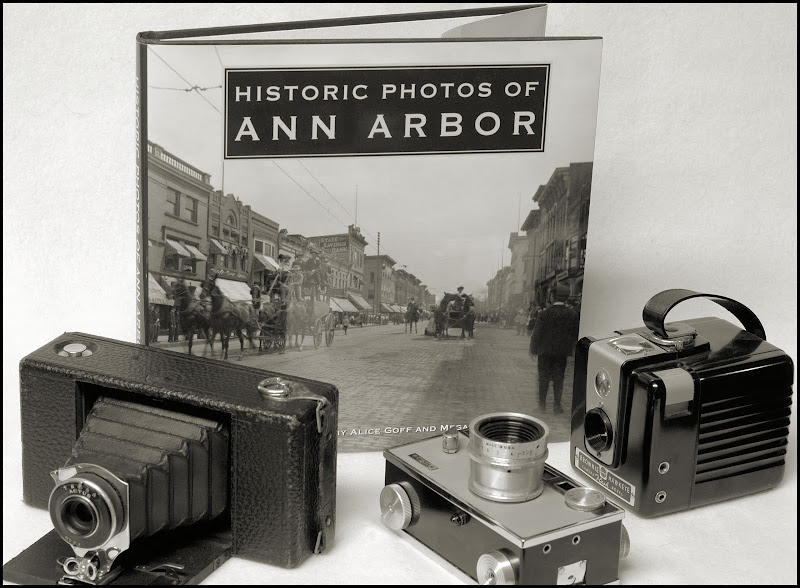 A Review of Historic Photos of Ann Arbor


Last week, I received a book to review from Turner Publishing Co. I'm a big fan of photographs of known places from the past, and know that in many instances, what we see out there is just scratching the surface. Any town that has an educated populace, a university, and close proximity to a larger urban area, ought to have plenty of vintage photographs documenting its activities, people, disasters, parades, architecture, merchants, and civic organizations. Often, we get to see a few dozen images at best, and the rest, we have to assume, are stashed away, filed, or forgotten somewhere. Since photography has existed for about 170 years, there have to be many thousands of images of large cities. As the technology of the medium improved and the number of photographers grew, one would imagine that in some cases, we could have an almost complete photographic record of some villages and towns from their inception to the present day. Obviously, the more one goes westward, the more likely that scenario is going to be.


With my thoughts above in mind, I now review Historic Photos of Ann Arbor with text and captions by Alice Goff and Megan Cooney by Turner Publishing Company. Both authors are from the Bentley Historical Library at the University of Michigan. The Bentley is an amazing repository, and as the source of the photographs and information contained in this book, it's actually surprising to me that the book wasn't published by the University of Michigan Press. It's also somewhat of a surprise that some prominent Ann Arbor historians were not involved in this book. However, sometimes a fresh look needs to be taken by others, and in this instance, I think the authors did a splendid job assembling a variety of images of Ann Arbor from the 1860s to the 1960s. One hundred years is a lot of time to cover, and thankfully, the majority of the photographs pre-date the 1950s. Even though the University of Michigan is at the center of the growth of Ann Arbor, I appreciate that most of the photographs are peripheral to the University, and show more of the interface between town and gown. I should also point out that I had not seen any of the photos that appear in this book elsewhere (or at least I don't recall seeing). That is probably due to the outstanding archives at the Bentley Library -- and an appreciated bonus is that each image in Historic Photos of Ann Arbor is cataloged in the Bentley Library with the data available at the end of the book. I imagine the authors must have had some hard choices figuring out which photos to include in the book. No photographers are credited in the book, but I have to assume that such information is available from the Bentley Historical Library. I know that in many such archives, photographers are often anonymous, unless the photographs came from the estate of a photographer. During the late 1800s and early 1900s there were a number of portrait studios in the area, so I wonder who took the photographs. That's probably of very minor interest to most readers, as the photos are the real story.


Anyone with an interest in the history of Ann Arbor will like this book, and the breadth of the photographs really shows the history of the town. Many readers will appreciate the architecture that's long gone (and some still standing), as well as seeing how much has changed over the years. Today, we talk about buying "local," but as you will see in the photographs, local manufacturing and agriculture was a given state of affairs before 1940. Some may see the photos of long-extinct streetcars, and wonder, as we rethink our urban lifestyle, when such modes of transportation will be feasible once again. I think that the authors did a reasonable balance with the captions -- enough information to put the images into context without going into too much interpretation.


Back to my original train of thought -- this book fulfills much of the criteria of a photographic history, and no single book can contain everything, nor satisfy every varied interest. I do believe that if you enjoy seeing your town "back in the day," then you'll enjoy looking through the pages of Historic Photos of Ann Arbor. Since the photographs are large, there is a lot of detail to look at, and you may find some recognizable surprises throughout. The hardcover book is well-laid out, and at 205 pages, most of which are filled with photographs, is a deal at the price of $39.95. This book is available at most area bookstores.

Posted by mfophotos at 1:59 PM No comments:

There are a lot of small 35mm cameras out there, but if I had to pick one that is a favorite, it would have to be the terrific little Olympus XA and its descendants. For starters, it's a real rangefinder camera, has aperture-priority shooting, and its clamshell case protects the metal-bodied camera from the usual bumps and debris, and is easily carried in a pocket. It runs on a silver-oxide battery, and has a wonderful 6-element 35mm f2.8 lens. It's a more useable camera than my Rollei 35TE, and far more compact than the much later Olympus Stylus which is AF, requires a larger battery, and is noisy. It's the most compact 35mm rangefinder camera that is capable of producing excellent quality images. The one drawback might be that the flash is a separate unit, but the way I use this camera, I almost never need the flash. It also comes with a tripod socket, so with a tiny tripod, you can use the camera on a table for long exposures. It would be nice if the ISO setting would go as high as 1600, but 800 isn't too shabby.

This photo from Erich Zechar exemplifies the beauty of this camera:


I've had my XA for a number of years, and paid $50 for it -- with the original case and flash. More recently, I acquired an Olympus XA-2. The XA-2 isn't quite as full-featured as the XA (it has zone focusing), but it's still pretty good. The fun thing with the XA is that because it is easily carried about, I often leave it in my messenger bag as the camera that's there when I need one. As a result, it may take me months to go through a roll of film, and I have often forgotten all about what might be on a roll of film when I finally process it. The upside of that, is that it's always a surprise when I get the film developed. The downside is that I sometimes have to rack my brain about where I took the photos.

I'm supposing the Vagina Monologues was in town. Either that, or someone just really loves vagina, But then, who doesn't?

See what I mean? Random photos (hence the name of this blog, huh?) that I have to go through and attempt to figure out their context.

At the 2008 Summer Art Fair. I am pretty certain I also shot this with a Diana.

At my workplace. I am pretty sure I shot this because I loved the sky at that moment.

Only a short time ago -- back in September at the Found Gallery, where four of us had a show.

On a 24 exposure roll of old Kodak HD 400, I had several months worth of imagery. I think I'll put b&w in next time, just to vary things a bit.

There are a lot of resources on the web regarding the Olympus XA, and I'll point out my favorites:

The Olympus XA, XA2, and others are easily found on ebay, occasionally at thrift stores, and sometimes in a drawer somewhere. They are compact 35mm cameras with excellent Olympus optics and are a favorite of photographers that like having a dependable camera for those times when a full-featured and very obvious SLR just won't do. As a result, the used prices are higher than many other cameras of that vintage. When you find yourself one, keep it.
Posted by mfophotos at 12:15 PM 5 comments: