Every year for the past few years (except last year) a bunch of film photographers meet up N of Traverse City MI in late June to attend what has become Photostock (you know, like photography Woodstock). Bill Schwab hosts the event in Harbor Springs, and it's a very laid-back time. It's great to reconnect with other photographers with similar interests, and spend time talking about photography, doing lots of shooting, and basically recharging the creative batteries. Usually I team up with my buddy Marc Akemann, and we go find photos where we can. It's a lot of driving, of course, but we have a great time, and some of my most memorable photographs have been made during the long Photostock weekend.

I try to bring a different camera system or format for each time I have participated. This year, I am leaving the DSLR and lenses home, and am shooting mostly medium format. I'll have my Mamiya 645E system, a Great wall 6x6 SLR, a Halina AI TLR (crappiness abounds!) and an Argus Argoflex 40 to shoot some expired Verichrome Pan film. I'll also have my Penatx ME with the 40mm pancake lens and the pocketable Chinon Bellami (see previous post) for the 35mm end. An Olympus C5050 will be with me for snapshots of events. I'm also bringing a backdrop, lightstands and umbrellas in case I decide to shoot portraits with the Great Wall.

Hopefully, we won't have rain, but whatever happens, I know it will be good to get away! 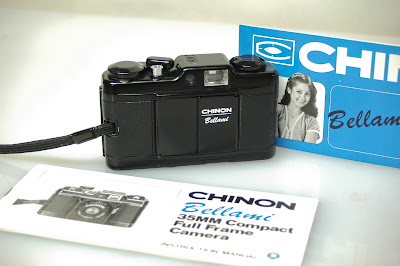 The Chinon Bellami, a little 35mm camera with zone focus and "barn doors" covering the lens, is a very desirable pocket camera. Introduced in 1981, the Bellami shows some similarities with the much-loved Olympus XA series. Approximately the same size as the XA, the Bellami has a retractable lens that is covered by two doors that flip open when you advance the film, which also turns the camera on. The exposure meter can be set for ISO ratings from 25 to 400. The cameras also features a threaded cable release socket, shutter speeds from 1/8 to 1/1000 sec., 35mm f/2.8 lens, daylight (fill flash) sync, and battery check. The detachable flash is very similar to that found on the Olympus XA series, and definitely makes for a less-compact camera when attached. 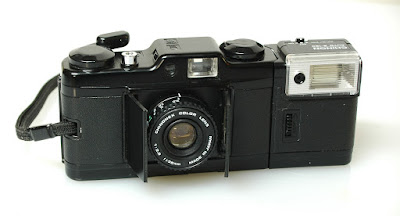 I picked up my example on ebay for a modest price. I was amazed that the camera was still in its original box with all the papers and manuals. I was prepared to be disappointed by this camera, as sometimes the hype on some classics (a modern classic, if you want to call it that)exceeds the results obtained. It IS a small camera, shown here next to an old roll of Kodachrome (which is used only for illustrative purposes). 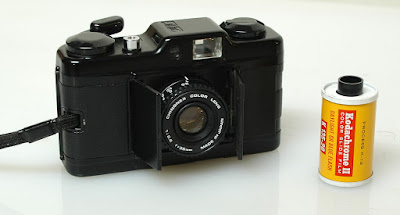 The Bellami is a stylish design, much nicer than the clunky Rollei 35, though a tad longer. Not too different in size from an Olympus XA, though. With the doors covering the lens, it slides easily in and out of a pocket, and is comfortable to grip. I can set the distance marking to the 10m ft marking, and it's basically a point and shoot. Compare the Bellami with the hulking Pentax 6x7: 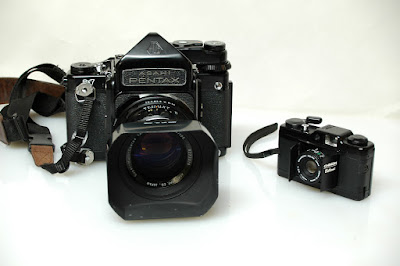 Of course, with any camera, the proof is in the images. I found that my camera had some trouble in the beginning with longer exposures, but after working with it a while, it appears to have just been in need of some use. Here are a few shots on color film:

A detail from the Diego Rivera mural at the Detroit Institute of Art.

The wall of the Dexter bakery.

I later put in a roll of long-expired Delta 400 b&w film, and I think the results are not too bad. 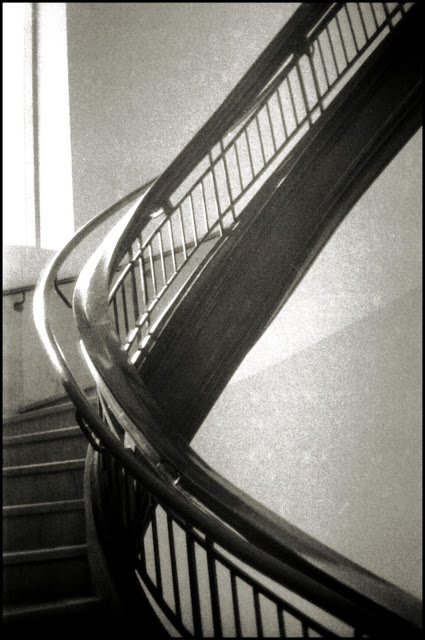 stairs at the UM Museum of Art. The negative was greatly overexposed, but post-processing cleaned it up pretty well. 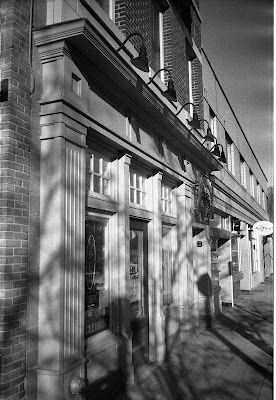 Along South Univ., note the bromide drag from developing. 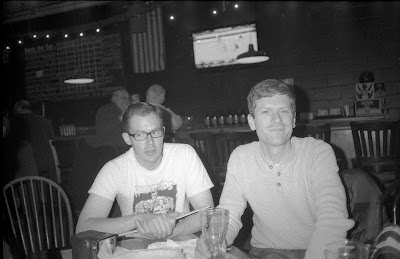 Using the flash -- I think I'll stick to natural light. Like any small camera with the flash so close to the plane of the lens, lighting will be kinda harsh. 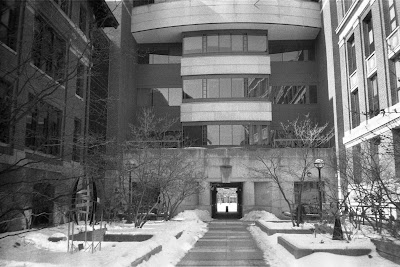 On campus, once again. Not too much distortion in the verticals here.

I'll put more film in the camera this week and do some more shooting with it. Now that I know it's a fairly decent performer, it will travel with me for a while and I'll see how it does when the weather is summery, rather than wintery. So many cameras...

An Explosion of Flora

If you like photographing flowers and gardens, late May and early June is truly a time to not stand still. There are daily changes in what's blooming, and it comes and goes very quickly. I am very fortunate that my wife Adrienne is a horticulturist -- the fact that we have wonderful gardens with beautiful perennials is all due to her talent and hard work. Me, I dig holes and plant things where she wants them. I'm not clueless about plants or flowers -- I had a botany minor in college, and as an entomologist, it helps that I know something about plant life. However, I am a better photographer than I am a gardener. The gardens at our house provide me with a never-ending source of photographic subjects, and I am sure that I have shot thousands of images right here.

The point I want to make here is that the way to hone your skill and develop a style, is to shoot often. If you are interested in flower and garden photography, architectural photography, nature photography, fashion, trains, or any other genre -- you need to shoot often to better your skill and competence, as well as find a style that gets your creative side going. Not everyone can shoot some subjects every day, but flowers and gardens are good training and preparation for other types of nature and landscape photography. Shoot at different times of the day -- even twilight, to see how lighting changes the atmosphere of an image. Wet flowers and grounds after a rain give the garden a totally luscious look that is absent when everything is dry and less intense-looking. Try different focal length lenses and see how they affect your scene. This is a good time to become familiar with your tripod as well. I recently set up my old plain-prism Nikon F with the standard 50mm f:2 lens, a roll of Walgreens 200 (made by Fuji) color film, my sturdiest tripod, and a cable release. I wanted to shoot in the garden late in the day at f/16 and see what results I might get.

As you can see, that photo is pretty darn sharp, well-detailed, and great color. Sometimes I want a softer, dreamier look.

But not this dreamy...

I'm thankful to have such a lovely photographic playground!