The Mark and Marc trip to Photostock 2013...and beyond.

Bill Schwab has been hosting an annual gathering of film photographers in Northern Michigan near Harbor Springs for the past 7 years or so.  The gathering, Photostock ( a photographic Woodstock of sorts), originally took place in the woods at Bill's site SE of Cross Village. It became necessary to move most of the events to the Birchwood Inn N of Harbor Springs as the event became more multifaceted and the crowds grew. This year, part of the event was a christening of Bill's newly-built workshop building that was launched with funding from Kickstarter.  About 70 people showed up throughout the 3-day affair and like any annual event, it becomes a time to renew acquaintances and make new friends.
Getting ready to make the trip, I assembled my photographic gear...a few cameras (not shown are the additional lenses, tripods, etc., that also went). 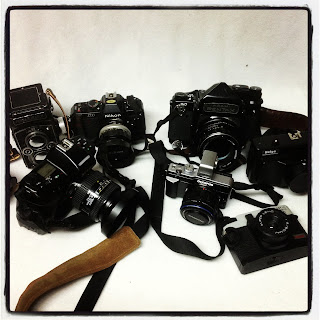 My good friend Marc Akemann and I drove up to attend Photostock 2013 last Thursday, and along the way did what photographers do -- eat and shoot photos.  We drove up M-52 to Owosso aand then went W until we hit US-127 and took that to I-75 and then to Mackinaw City where we stayed for the thee nights of Photostock, as we did not make our plans early enough to get a room at the Birchwood Inn.   However, it all worked out pretty well, and we had a great time seeing everyone and talking about photography.  It's always a very good-natured crowd, and I always come away with having learned something new, and new contacts.

Marc and I did some night shooting, too, as we were able to get some images of the Mackinac Bridge at night in the fog.  Morning fog was pretty good, too, but the coffee quickly took care of that :). Oh, and the fog over the water was nice, as well.

Mighty Mac in fog.
I shot extensively with my N90s abd N2000 cameras, my Rolleiflex, the Debonair, and my Olympus Pen E-PL1 (which accounts for most of the digital images here).  I have 19 rolls of film to process, so these digi shots will have to suffice for now.  Having said that, the CCTV lens on my Olympus Pen really gave me a look that I like, especially at Fayette State Park.  I am posting a few shots of our Photostock trip here, but it's easier to go to the set on Flickr for all of them. 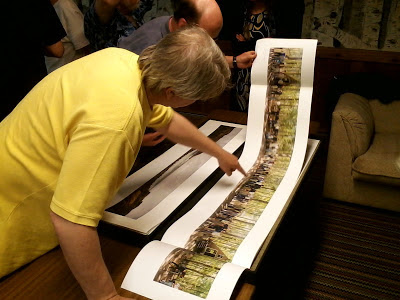 Checking out Jamie Young's amazing prints from his panoramic cameras.  They really are quite spectacular. Jamie gave an engrossing presentation on the history of panoramic photography Friday night at the Birchwood Inn. 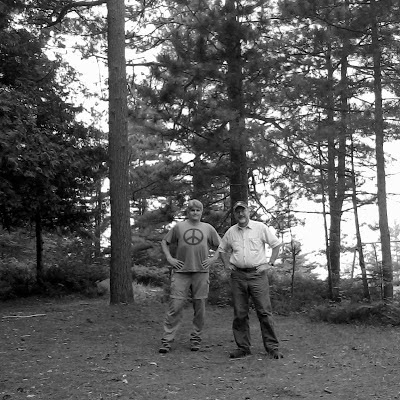 Marc (L) and Mark (R) at Wilderness State Park.  I was amazed to find that my cheap smartphone had a self-timer for the camera.  We spent a lot of time in Emmet County, and then went across the bridge to the UP for the second part of our trip.  I think that we put over 1,000 miles on the vehicle for this trip.

One highlight was seeing my daughter and her partner Stephanie in Marquette.  A visit there isn't complete without a few photographs from Presque Isle, and I know Marc really enjoyed being there at sunset.  I could shoot there every week and come away with something different each time. 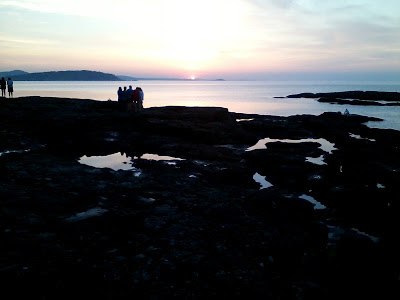 The Black Rocks at Presque Isle are especially worthy of a few hours (days?) of a photographer's time.  Maybe that would be a good destination for a photo workshop in the future.

Just a few of the fine photographers at Photostock.


Posted by mfophotos at 2:16 PM No comments: