Jeff Lamb, fellow photographer, citizen of Ann Arbor, and friend to many, slipped away from the living on Tuesday, due to cancer. It's hard to believe that he'd gone so quickly. I visited Jeff in hospice last Friday, and there were moments when I could sense a tiny bit of the old Jeff, but his condition really shocked me. I think he had been diagnosed with liver cancer only three weeks before. The previous time I saw him was in early January when we had a beer together, and afterward I saw him on the street photographing like he did so often, with his digital Leica. That was Jeff, with his floppy hat and camera, finding something interesting in everything.

Jeff always had a story to tell, and to sit down with him and talk about photography, architecture, the history of Ann arbor, and politics over a beer or two was not a bad way to spend a few hours. There was a gentleness and twinkle to Jeff's eyes that said "I'm enjoying life." In January, Jeff told me was getting into doing some new projects, and was quite enthused about photographing some parts of Detroit. Somewhat like his comprehensive survey of New Orleans neighborhoods, Detroit offered a new challenge. The decaying neighborhoods and possibilities of showing people at their best when a city is at its worst was obviously intriguing.

I can't say that Jeff and I were lifelong friends, but he had a way of making me feel like we had always been so. I suspect he had that effect on a lot of people, as many, many friends have expressed their sorrow and love of Jeff over the past few days. Jeff was a kind, interesting, and genuine person, and his wife Leyla and their dog Sonny Boy are probably missing him terribly. Who would know that when he celebrated his birthday on January 16, that it would be his last?

I am sure that when Jeff's friends gather sometime to celebrate him and his life, there will be some great stories. Probably a few will point out that while Jeff's life ended too soon, he had a colorful, interesting and purposeful life. Which, in all fairness, is the best anyone can hope for. Have a passion about something and do it, with no regrets later. So long as we remember those things about Jeff that made us smile, a bit of him is always with us.

Last Sunday, four of us took the MegaBus from Ann Arbor to Chicago to take in the Vivian Maier exhibit at the Chicago Cultural Center. Arriving a bit after 11 Chicago time, we did some sightseeing/photography on the way to the exhibit. The Union Station in Chicago is a very photogenic building, both exterior, and interior.

I love the way the shadows from the columns hit the pilasters.

We arrived at the CCC around 12:20, and met up with one of my Flickr contacts, Trish, and two former Ann Arborites, Pedro and Angela. The Vivian Maier exhibit is astounding. Her photography is empathic, for want of a better word. In looking at the breadth of her work, one can easily see traces of Diane Arbus, Gary Winogrand, Henri C-B, etc. However, her images are truly her own. The image selection was wonderful, and I left the exhibit wanting more. I am sure that we will see more of her photography in the near future.

A sneaked shot of a part of the exhibit. Those are three of Vivian Maier's cameras in the display case.

There was also a big show of many prints from a Diana camera -- all were printed small - contact size, and while I liked the show, there were a few too many. After that, we went upstairs to see the Louis Sullivan architecture exhibit. The Chicago Cultural Center is a beauty of a building inside, and an orchestra was playing while we were there, adding a bit extra to our experience. Oh, and they have an Art-O-Mat there, which is very cool. The giftshop was closed, so I could not buy a token to use it.
We then made our way to Miller's Pub for a tasty lunch -- they have an extensive beer list - I had a Smuttynose Porter, which was quite tasty. We then bid goodbye to our Chicago friends and walked back to Union Station to wait for our bus. We had a relaxing ride back, arriving in Ann Arbor around 10 pm. A whirlwind of a trip, but it's always nice wanting more...

The group, with the exception of me...somebody has to be the photographer!

I used the Pentax ME and the Rolleiflex for most of my shots. I love the ME for street shooting, since it's aperture-priority, lightweight, compact, and fairly quiet for an SLR.

Off to the Windy City 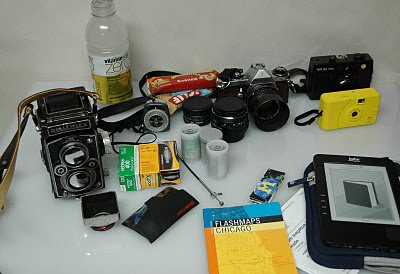 A small group of us are taking the Megabus from Ann Arbor to Chicago to see the Vivian Maier exhibit at the Chicago Cultural Center. I'm looking forward to the whirlwind stop in Chicago, and given the price of gas right now, $41 round trip seems like a bargain for one person. On top of that, the drive there and back won't be a problem. We leave about 7:30 local time, and arrive at Union Station in Chicago 11:15 Central time. (On top of that, Daylight Savings Time starts tomorrow). It's about a 10 block walk to Millenium Park from the station, with lots of photo ops along the way. We'll be meeting some Flickr friends from Chicago, and see a few sights, eat something, and then back on the bus a little after 4 pm.
I'll travel light-ish with one bag and 4 cameras...at least 2 of them weigh next to nothing!
Posted by mfophotos at 7:44 PM No comments: I'm teaching an adult ed class on Sunday and Wednesday, titled "Water Photography." True to my procrastinative self, I have of course, put off getting my presentation ready. I will probably finish my Powerpoint slides today, but most of my effort really goes into deciding how in-depth to cover a subject in a few hours. Any aspect of photography, any subject one can think, undoubtedly has several approaches, and many techniques and tools to consider. In my class, it will be about shooting all three phases and combinations thereof, and the different approaches and aesthetics that each phase may present.

I have always enjoyed photographing water -- some of my earliest shots in the 1970s were of the river and streams behind the house where I grew up, in northern NY. The landscape there is a lot more rugged than the flatness of southern Michigan, but even here, one can savor the sounds of a babbling brook with a little searching around.

Water photography is always a challenge in trying to get the best exposure. My long exposures of moving water are a never-ending search for perfection. Sometimes I do it pretty well.

It's always fun getting a class like this together. I enjoy teaching things I am passionate about, and watching students grasp a new concept or be amazed at what a simple filter can do is fun for me.

The class isn't just about shooting waterfalls, though. All three phases of water will be covered, with tips, techniques, and tools for each.