My favorite cat, Stanley, died sometime today. I last saw him this morning preening himself on our bed. Adrienne discovered him there this evening looking all the world like he was sleeping. He seemed so healthy, but I did know that he had a ticking bomb somewhere, as he'd had a few seizures over the years, and the vet had told us several years ago that he had a heart irregularity, but really, there was nothing that could be done about it. I guess it finally caught up with him, but it seems like he went out without pain, and in a peaceful manner -- which given all the possibilities, isn't so bad. Still, we are quite upset, and Marjorie, away at NMU, is devastated.

Stanley was athletic, he loved to sit on my shoulder, talk to me, and he was always very lovable. Just last night he was on the couch and was enjoying being rubbed and adored. This morning I called his name and he came running, almost like a dog. When our dog Mac (who died on June 2, 2007) was alive, Stanley would play games with him, such as jump over Mac when he ran past a doorway. He also had a penchant for catching and dispatching chipmunks, and though we was a house cat, we would let him into the backyard along with Kosh and Phantom, the other two cats -- when we were home-- for a few hours at a time. Stanley seemed to catch on and soon figured out the chipmunks.

I will miss his goofy ways, such as him dragging a little stuffed toy sheep around the house and meowing, talking to me when he wanted catnip, and his affection. Truly, he was a unique cat that was a part of our lives. He will be remembered as a great feline companion.

Go Out In a Blaze of Glory

Sort of. I saw that Staples had an online special on Polaroid 600 film, so I figured it was worth $120 to get 120 images from the two Polaroid SX-70s that I recently obtained. There will never be another camera like that pioneering wonder from Land and his crew in 1972. Once the Polaroid film is gone, that will be it, too, for those cameras. I found out how to modify them to take the faster 600-series integral film, and luckily, I have a supply of neutral-density gels that I was able to cut up for placement in front of the lens. Because of the 2x ND filter, the view is dimmer, but having a real SLR in my hands that shoots that film, and fits into a coat pocket is wonderful. Makes those 600 series cameras look like the plastic pieces of junk that they are.

So, I have been shooting with the 2 cameras, though I like the original manual-focus SX-70 the best. I love the close-focusing, and the ability to have a blurred background. I went for a short walk down S State Street in Ann Arbor at noon today, and came away with a pocketful of photos:

A Night at the Museum

For some time, I have wanted to get a bunch of the Crappy Camera people over to my workplace for a night of photography. Most workplaces don't have a couple of mastodon skeletons, an Allosaurus, fossils of various kinds, dioramas, or mounted animals. Yup, I work at a museum -- the University of Michigan Museum of Zoology. However, the research museum is not as photogenic as the Exhibit Museum in the same building, which is where the Ann Arbor Area Crappy Camera Club ended up on Tuesday evening. Amy Harris, the director of the Exhibit Museum thought it sounded like a great idea, and we had pretty much free rein of the exhibits from 6:30 - 9 pm. Twenty people braved a snowstorm to take advantage of the opportunity to bring whatever cameras they wanted, tripods, and in one case, a model. I also encouraged the attendees to donate $5 each for the Exhibit Museum, and $110 was a big surprise the next day for the Director.

The Ruthven Museum Building was completed in 1927, spurred by Alexander Grant Ruthven, the Director. He later went on to become the President of UM, and the building that now bears his name houses the Exhibit Museum, and Museums of Anthropology, Paleontology, and Zoology. It's the Exhibit Museum that people see, and is just generally known as the Natural History Museum.

Anyhow, people quickly dispersed and wandered around, setting up equipment for their shots. The array of cameras was great -- Polaroids, an Argus, Hasselblads, a Sinar view camera, digicams, Holgas, Dianas, pinhole cams, a Lubitel, and I'm sure a bunch of others that I never saw. I spent quite a bit of time photographing the wonderful stairs. Something I just can't do during the day, because of people using them. The dioramas got quite a bit of attention as well. They really are quite wonderful.

A museum such as ours may not be on par with the likes of the Smithsonian, American Museum of Natural History, or the Field Museum. However, the exhibits are well-done, and for a university museum, is pretty outstanding.

After we had shot all we could, a few of us headed over to the Brown Jug for some beers and food, despite the snowstorm. Others that had to drive some distance left right away, only to find a 25 minute commute turn into a 2 hr trip.

Of course, afterwards, I thought of some things that I forgot to shoot, but hey, I can just stay after work and do that...
Posted by mfophotos at 9:16 PM No comments: 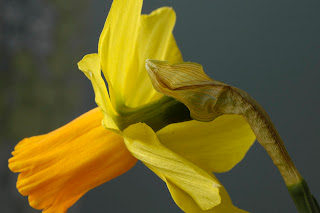 Not the most imaginative of titles for a post, but it's the date. I'm home with some kind of nasty cold virus that has made me feel pretty crappy the past few days, and I spent a good deal of yesterday in Rochester, MI sitting at a table (along with my friend Cynthia) to appraise cameras and photos for the Rochester-Avon Historical Society's Appraisal Day -- not one person came in with something for us to look at. So, as you can imagine, that was a bust. Speaking of busts, I had some nice feedback on my previous post, which is encouraging.

Even earlier, I posted about the demise of Polaroid film, and the media response to what is happening has been nothing short of amazing. I think if anything, this has opened people's minds to why Polaroid film is unique, and has no digital equivalent. I hope someone rescues the process.

I have to confess that I am tired of winter now. This has been a strange winter. If it were not for the frequent melt-offs and rains following snow accumulations, we would be up to our elbows in snow. But, I also hate having it snow and then raining and freezing a few days later. Ugh. So, it's March 3, and I would like to see an end to gray days, and more sun and the hope of green. Of course, I know we have at least a month to go before it feels really spring-like.

I've been having fun with my Hasselblad - I finally picked up an 80mm planar lens with a hood for it for $260. That would have been unheard of a few years ago. Thank you, people, for dumping your beautiful Hassy gear and jumping to the Digital World of No End of Upgrades in Sight. That makes using the Hasselblad affordable for me. Now to pick up a couple more backs, and I'll be set for a while.

So, appropriately, here are a few 'blad shots from inside the Conservatory at Matthaei Botanical Gardens, where it does not matter what time of year it is outside.

Saurian Food - a Cycad at MBG
Posted by mfophotos at 9:28 AM 1 comment: