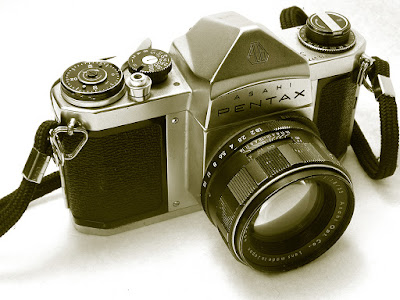 Today I went out and did some shooting with a lovely little Pentax S3. A predecessor of the Spotmatic series, the S3 lacks a meter and a self-timer. It has speeds from T and B to 1/1000th sec. This particular camera is a beauty -- the chrome is good and it seems to work just fine. Considering that it is about 42 years old... that is amazing. It handles well and is a joy to use. I can adjust my exposures using the "Sunny-16" method, or use a hand-held meter. Teamed with the 1.8 55mm auto-Takumar, or a 135mm f 2.8 Mamiya Sekor M42 lens, I ought to get some nice shots. Roger Hicks has a nice article about the precursor to the S3, the HV. 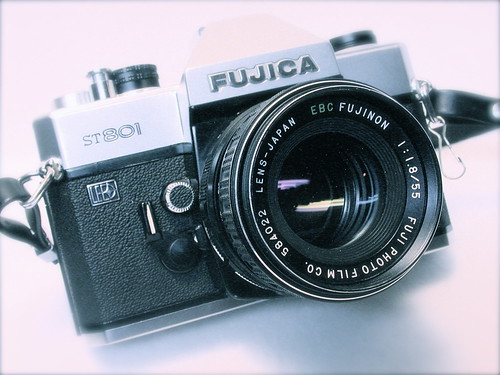 Another beauty of a camera is the Fujica ST801. With depth of field preview, LEDs in the viewfinder for adjusting exposure, B- 1/2000 sec shutter speeds, and a nice viewfinder, it might just be the ultimate M42 camera to use those old lenses on. I used this one last week and was pretty happy with my results. 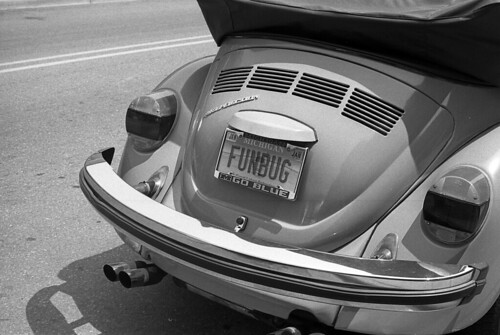 Maybe you have an old screw-mount (M42 mount or Praktica mount) SLR. Dust it off and try shooting with it. If it is working properly, you find the inescapable feeling that you are using a fine piece of camera gear. Those old Spotmatics, Ricoh TLS Singlex, Chinon CM-3, and similar cameras can still enable one to take some pretty damn good photos. For more information on screw-mount cameras, try the M42 camera site.
Posted by mfophotos at 10:39 PM No comments:

Over the past few years I seem to have accumulated some Exakta cameras and lenses. In fact, my first SLR was an Exakta Exa 1a, back in 1974. That camera, though primitive compared to the standards of the day, taught me a lot about photography and served me for a number of years. I sold it quite a while ago, and a few years ago, acquired another Exa. I don't use them all that much, but they are interesting and somewhat peculiar SLRs. You can read a lot more about Exkata cameras on the Exaktaphile's web pages.

I was recently looking through a box of miscellaneus adapters and found a peculiar little lens adapter from Minolta - the "E adapter". Ha! An Exakta lens adapter for Minolta cameras. That was rather surprising, but since I have an M42 mount to Minolta, I guess it makes sense. There were a lot of decent lenses made for Exaktas (and Topcons that used the Exakta mount at one point), and putting them on a more modern camera body makes sense. I got out my Minolta X-700 (a fantastic manual camera, in my opinion), and put on the adpapter. I then attached one of my Exakta lenses, a Zeiss Jena Tessar, and I had a 56 year old lens on my camera, and I could shoot in aperture prioity if I wished. Cool. Now I'll goof around with these things and will post some images of my results later.

As much of a Nikon lover as I am... their mount pretty much is Nikon or nothing. So, it's fun to able to play around with other permutations of lenses and cameras. OK, so you Canon Eos people have had all kinds of adapters for years.

Here are some images of the gear: If you have been paying attention to the photo history groups recently, you might have heard about the fantastic discovery of the darkroom in France, left untouched since 1855. Tim Atherton's Muse-ings blog has a nice summary with photos of the darkroom and some bio on the photographer, Fortune-Joseph Petiot-Groffier who died in 1855. Not too surprisingly, I had not heard of him, but I suspect his name will become more commonly seen in the coming months as his photographic time capsule gets cataloged and written up by curators in France. I think it's amazing that a room would be locked and left untouched for that long. I'm also wondering what kind of state the chemicals are in. The compounds that were used in those days were not necessarily the stuff you'd want to inhale, unless you wanted a shortened life. Daguerrotypists exposed themselves to mercury fumes...not good. However, reading a bit more about Petiot-Groffier, it seems that he moved over to Talbot's Caloptype process, which would have been a good move for many reasons. As interesting as Daguerrotypes are, they are a dead-end process. Every image is unique, since there is no negative to make more copies with (geez, sounds something like Polaroid). Talbot's negative/positive process is the one that we use today in analog photography. The materials are better, more sensitive and more varied, but I'll be Henry Fox Talbot would feel at home in a modern darkroom, and presumably, so would Mr. Petiot-Groffier.

Memories of a Good Friend

On June 2, we had to euthanize our Sheltie, Mac. He was 11 1/2 yrs old, and although he'd had his share of health problems over the past couple of years (repaired ACL, and hip arthritis, etc.) up until a bit over a week ago, he seemed to be doing okay. Then, he started having problems, and although I kept some hope that he would rally, in my heart, I knew that the end was near. It was a very emotional week for me, watching my beloved dog become more decrepit each day, and though I know he struggled valiantly, I could see the resignation in his eyes by the end of the week. I cried more over his frailty than anything, and on Saturday morning, we carried him to the front lawn where he could enjoy a few hours of fresh air, some sun, and our love. Then, we drove a mile to our vet, and laid Mac on his dog bed while he recieved our final goodbyes and we held him and cried as he died peacefully and with dignity. That was the hardest thing to do, and it still brings tears to my eyes as I'm still grieving. I know that it was time...and I think he did in a way, too. I can't imagine the pain of his arthritic hips, and the indignities he went through towards the end.

We plan on taking Mac's ashes and scattering them in places he enjoyed. The best thing I can say is that he was a loyal, playful, smart, and lovable companion and added so much to our lives since I first held him as a puppy. He loved to catch frisbees when he was healthy and in his prime. He was protective of our cats. He didn't bark a lot -- until his hearing started to get bad. His fur was soft and whenever we gave him a brushing, it seemed that there would be enough hair to make a sweater from. He traveled well, and loved to go camping with us, and follow on hikes. Everyone that knew him loved him, and I shall always have a piece of me that is missing with his absence. Adrienne was the one that usually brushed his fur, and as much as he seemed to not want to get it done, he resigned himself to it. Marjorie loved Mac, and this was very hard for her, too. There are many memories that I have from his 11 years with us, and those, along with the images I have of him won't leave me.

I decided to go through som old zip drives and see what old digital images I might have of Mac. I have some shot with one of my earliest digicams, The Logitech photoman - in monochrome in 1996. Then, another with an Apple Quicktake 200 in 1998. I'm actually surprised that I found them. They are not the best shots of him, but they are typical of the usual pet shots that one takes.

Thanks for reading this entry.