They laughed at my Coke Camera

Back in December, I was given a Coca Cola camera for my birthday (manufacturing date is ca. 1999).  It was very colorful, and as you can see above, a simple 35mm box camera with a plastic lens.  Shutter speed is probably 1/100 sec at f/11.  Pretty much like all other plastic cameras that are given away as premiums, but more interesting-looking than most of them.  As I have stated before (many times), the throw-away cameras are capable of getting some decent shots when the conditions are favorable and you use a film with good latitude.  I loaded the camera with a roll of Superia 200 that I bought at a camera swap for 50 cents, and took it around with me on several photo outings.

...but I showed them

Here are a few images from the roll.

Of course, these images show that classic look that comes with these cameras -- vignetting, softness, lens aberration, some flare.  You just paid $50 for a Lomography plastic camera and you could have used a camera like this for a buck or two.  Sometimes, things do go better with Coke. 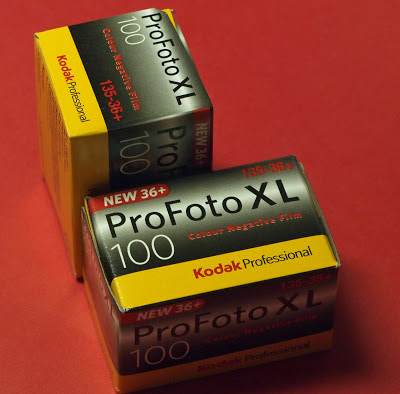 A month or so ago, I ordered some film from the Film Photography Project Store.  Three of the rolls were Kodak Profoto XL, a film I had seen online and mentioned on Flickr, but had not previously seen in person. The expiration date is 04/2013, so to me, the film is still fresh!  I did some digging around on the net, and it appears from Kodak's Spec sheet that it was introduced in 1997, and not for the US market, as it is a "colour" film.  It doesn't appear to have the same palette as the Kodak Gold 100 line, and is more like a Portra film.  It is not a "consumer-grade" film, as it is marked "Kodak Professional" for what it's worth.

I finally loaded up my Nikon EM with a roll of the stuff, and shot at various places -- at Matthaei Botanical Gardens, downtown Ann Arbor, around campus on a snowy day, some indoor portraits, and in Dexter.  I dropped the film off at Huron Camera in Dexter and had the images scanned in by them to save me an hour at my computer.  The images below have had very minimal adjustments made to them, and I really like the look of the film.  The saturation is very pleasing, and it doesn't seem to be as blueish as Kodak Ektar.  I typically like to shoot ISO 100 films unless there is a reason to need a higher ISO.  This film has a nice grain, and I think my results are pretty good.  I highly suggest picking some up while you can. 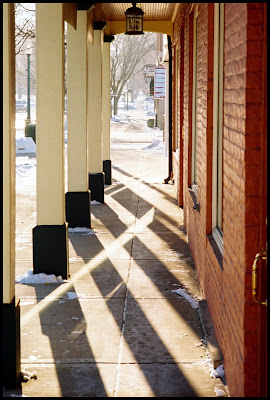 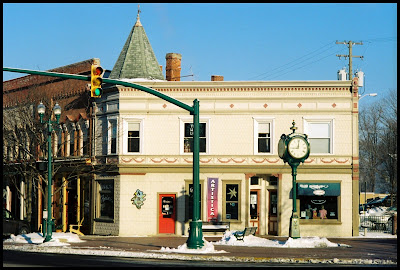 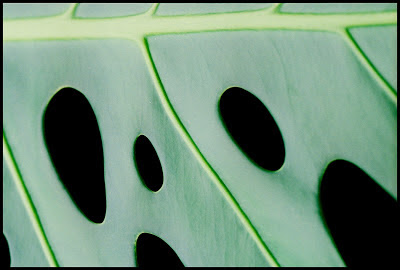 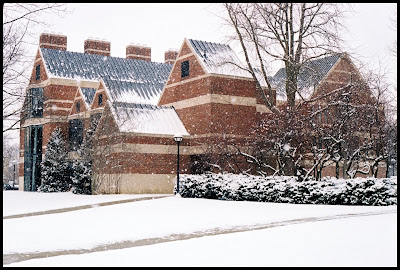 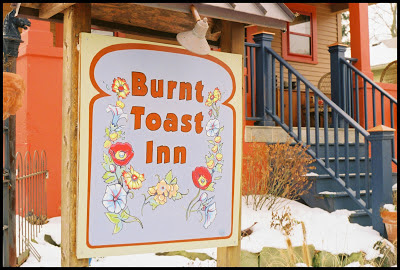 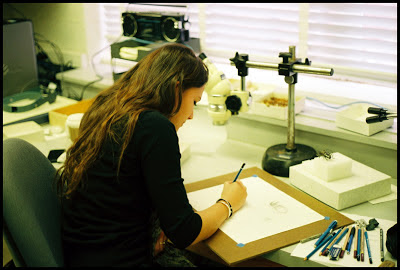 Posted by mfophotos at 10:58 PM No comments:

Shooting By the Seat of My Pants

It's not too often that I come across a classic Nikon film camera that I have not already tried out, and rarer still that I find one that I have never seen before.Yesterday, I was in Huron Camera in Dexter to drop off some film, and to have breakfast at Joe and Rosie's with my buddy Marc.   I was looking in their dsiplay cases where the Nikon items are kept, and saw a lens that interested me -- a 100mm Vivitar, Non-AI lens.  Not having a non-AI camera with me to try it on, I asked if it could be attached to one of the Nikkormats in the case.  Cheryl handed me a slightly beat-up Nikkormat, and I was momentarily confused, as it was lacking the metering prong that would allow the lens to couple to the meter.  It was a Nikkormat FS, an "economy" model that lacks the meter and mirror lock-up that is found on all other Nikkormats.  A contemporary of the Nikkormat FT, it was produced from 1965-71.  Since it has no meter, it lacks a battery, as well as the dials and display of the FT and FTN.  It also weighs a bit less.  In other words, it's not too different from a plain-prism Nikon F.  Because it lacks a battery, it is truly a bare-bones, fully manual camera.  When I have a camera with a non-functional meter, I am always thinking that I wish it were working so that I could use it.  With the Nikkormat FS, that is not the case.  Of course, having a separate light meter is helpful, and I have one when I am shooting my medium-format cameras.  Of course, since I had never seen an FS before, I bought it for $39.

Once I got the Nikkormat FS home, I put on a slightly banged-up early version of the 50mm f/2 Nikkor-S lens that has the focal length marked as 5cm and the distance scale in feet.  It is one of the best lenses ever made, and was in production for years.  Later in the afternoon, I took it into town as the sun was low in the sky, and shot a roll of Kodak T-Max 100 that expired in 1999. "Metering" was by my seat of the pants.  Every shot on the roll was acceptable, which must mean that my sunny-16 intuition is pretty good when I decide to use it. 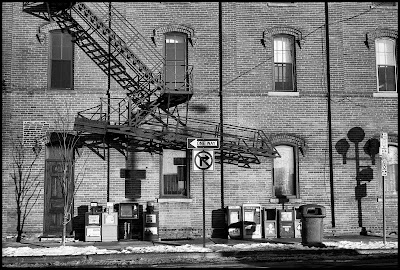 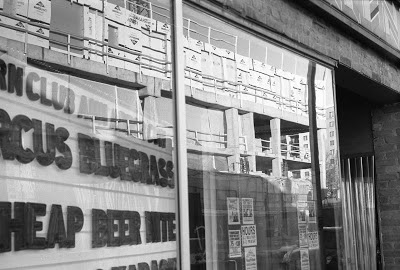 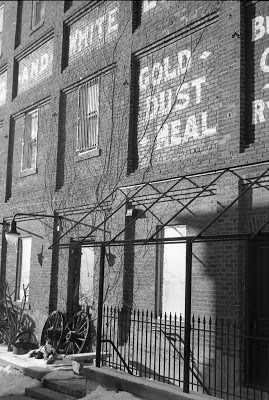 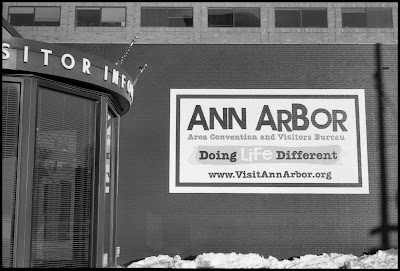 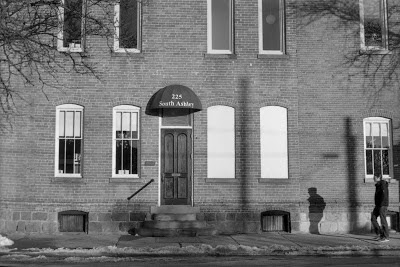 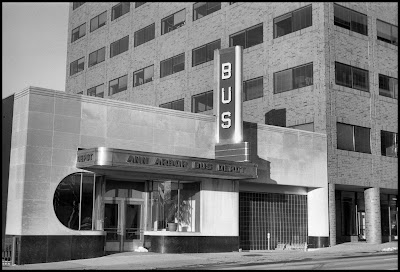 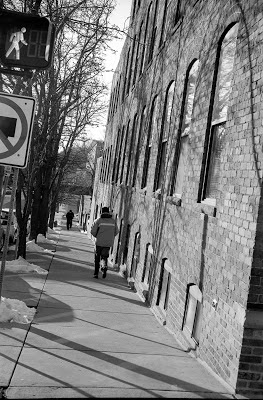 With all of the digital stuff that is being produced today, we take it for granted that any image is usually going to be properly exposed and in focus.  The Nikkormat FS gets one back to the basics of photography, and in that, figuring out the light on one's own becomes a necessity.   That sort of ties in with the "slow photography" movement that has become a news-worthy item.  For many of us, we have always been into "slow photography" we just thought that it was the way it was done.

You don't have to own a Nikkormat FS to go meterless -- there are thousands of cameras that never had meters.  However, it would be hard to find one with a better lens than that 50mm f/2 Nikkor lens.  If you want to go 35mm meterless, look at an Argus C-4 (the most usable Argus made), a Kodak Pony, a plain prism Nikon F, some of the Minolta SR-series SLRs, Pentax S2, a Zorki rangefinder, and for the cream of the crop, any thread-mount Leica.
Posted by mfophotos at 3:18 PM 2 comments:

The Little SLR That Could... The Nikon EM


The late 1970s and early 1980s were  an interesting time for photographers. Not yet into the auto-focus era, but micro-electronics were becoming more abundant in cameras.  Nikon's cameras have many accessories that can be used with a number of their camera bodies from the F2 through the Nikkormat and FM and FE models.  But what about the person that wanted the benefits of using an SLR without the hassle of knowing about setting exposure, and that that stuff?  Nikon came up with a small and yet elegant SLR that fit that requirement to a "T."  Not only that, Nikon introduced a line of cheaper Series E lenses that were optically very good, but used some plastic instead of metal where it made sense. The Nikon EM was introduced in 1979 as a camera for what we today would call the "soccer mom" market.  That is, a relatively inexpensive SLR with automatic features for someone that wanted to photograph events, etc. without having to figure out settings, but still get better results via the lenses that Nikon made.  Of course, by today's standards, the EM is quite limited for a P&S SLR.    However, at the time, and in comparison to its peers, the EM was quite capable.  It features:
In short, pretty much what anyone needs without manual control.  The typical lens that came with the EM is the 50mm f/1.8 Series E lens.  Not a bad lens at all, and the later models with the silvery metal ring are supposedly better made than the more plasticky earlier model.  Of course, any Nikon F-mount lens that is AI or AIS or even AF-D (manually focused) can be used with this camera, so you can plop a 500mm mirror lens on it if you wished.

A few things to know about the EM

A used EM in good shape should cost you anywhere from free to less than $50.  I paid $6 for mine, and the winder was $10.   As a small SLR, it is one that can be easily carried with that 50mm series E lens.  So long as you have fresh batteries (2 LR-44) the camera will be ready to shoot when called upon.  Perhaps it might not be considered to be the pro-powerhouse of the F3 or the FM2N, but like any camera, it will do as well as the person that wields it.  Besides, it's all-black, so that must mean it's "pro-grade" right? :)

Some recent examples from my EM: