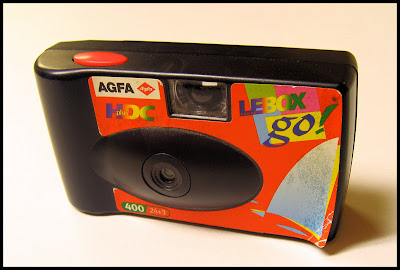 Last week I finally finished off some remaining frames from an Agfa Le Box Go! “disposable” camera that had been sitting around for so long I had no idea what was on it. After getting the film processed, I realized that I had owned it since at least 2002. That got me to thinking, and I believe it was from perhaps 2001, when I bought a bunch of them (quite cheaply) for use by some 4-H kids in a class I was teaching. The first image predates our moving to our present address, so that would place it about right. Later images are from walks around town that I probably took with my daughter Marjorie, and the rest are images from around the house. I was not too surprised to see that the negatives were in good shape. It was a nice surprise seeing the images that I had totally forgotten about. The Agfa color film was quite saturated and I really loved that stuff. I wonder how many disposable cameras with latent images are sitting around out there? I’m sure that not all that many of them are like mine -- “Low-fi art photography”, instead of photos of family and events that most of these cameras are used for. In terms of image quality, these little box cameras are a pretty good. So long as you have adequate light, the latitude of the C-41 color film will handle many situations quite well. As this camera was the version without a flash, outdoor scenes are pretty much it. Anything more than 5 feet away should be in focus. The plastic lens is quite good, (the aperture is probably about f/11), so anything up to about a 5x7 enlargement won’t be too bad at all...perhaps even 8x10 if you kept the camera still. 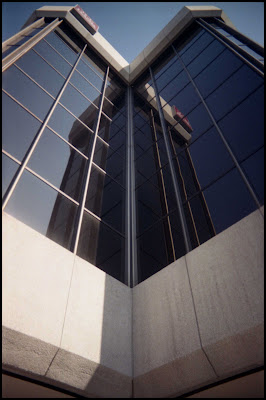 The Le Box camera has been around since the 1990s, and isn’t to be confused with earlier roll-film Agfa Box cameras from the 1950s. Advances in lens technology and film make today’s disposable cameras capable of taking photographs with better image quality in a much smaller negative than the box cameras from the past. Agfa had the honesty to call their little 35mm disposable what it really was -- a box camera. 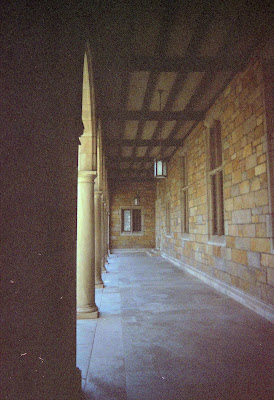 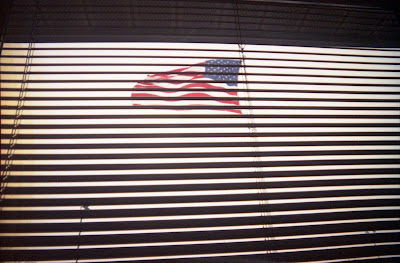 
The front yard, on Saturday. 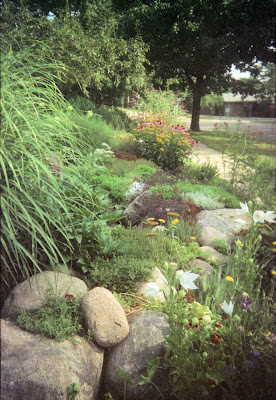 What’s in your Le Box?

Posted by mfophotos at 7:20 PM No comments:

A Trip Yields a Trip!

On Sunday, my buddy Mike Myers and I went on a photo excursion that took us through some back roads of Washtenaw County and west on US-12 as far as Coldwater. I shot some memorable photos along the way, and found a cemetery that I had never been to before. We stopped to look through some antique stores in Allen, which is about a dozen miles E of Coldwater. In one of the stores I found an Olympus Trip 35, which had a $9 price tag on it. I tried it out, and it seemed to work just fine. I had never owned a Trip before, so I figured that I would give it a shot. 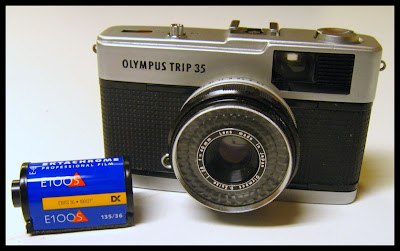 The only thing I can find wrong with it is that the ASA ring is somewhat loose, so I just have to remember to keep it in the right spot when shooting.
Anyhow, I took it to work on Monday and finished off the roll of film at home. Took the roll of Kodak Gold 200 to Walgreen's and had it developed in 30 min. A few photos for your inspection:

And finally, one from the garden: 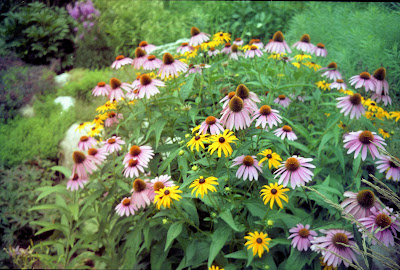 Overall, I am impressed with this camera. The shutter and aperture work like they should, so I guess I got my money's worth! There are a ton of sites about the Olympus Trip 35. So numerous in fact, that I won't re-post them here.

I was eating dinner on the deck last weekend (and if you don't know this, our shaded deck overlooks our wooded backyard, and we see a lot of nature from there) and saw a small piece of bark on the table. We had enjoyed some recent rain, and the piece of bark was green with lichen. I was going to drop it off into the yard, but then I saw the tiniest mushroom I have even seen poking slightly above the lichen. I knew I had to photograph it. Later that evening, I set up my macro gear and finally figured out the best way to photograph the scene. Setting up my Nikon D40 with a Noveflex bellows and focus rail, I put a regular Nikkor 50mm f2 lens on the bellows. A twin macro flash (can only be used manually) would give me plenty of light. I realized that I had to photograph the mushroom from the side, so I elevated it on a stand and then added a piece of light blue paper for the background. I shot at f/16 which barely gave me enough depth of field at full bellows extension.

This is the setup: 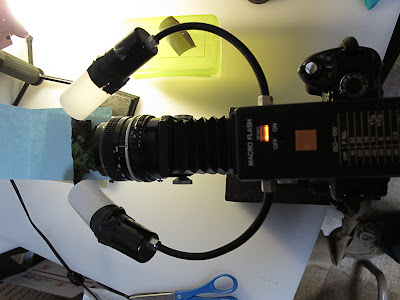 and this is a close-up of the bark flap - the mushroom was about 3mm tall! 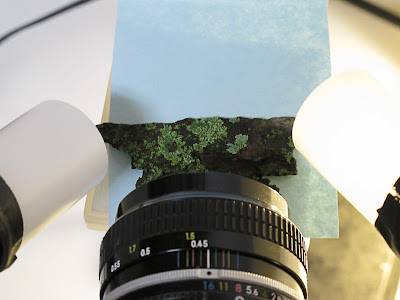 Shooting small bits of nature like this in the "studio" is pretty rewarding, as I can control the lighting and position (including mine!) so much better.

My daughter Marjorie and I were reviewing some cameras from her collection that she wanted me to sell on ebay for her. I pointed to one small 35mm and asked "What about that one?" "It's not mine, it's yours" she said. I recall buying it at a local antique shop, but I don't recall if it was mine or hers, but I'll take her word for it. I do know that I never ran a roll of film through it, so I am doing that now. 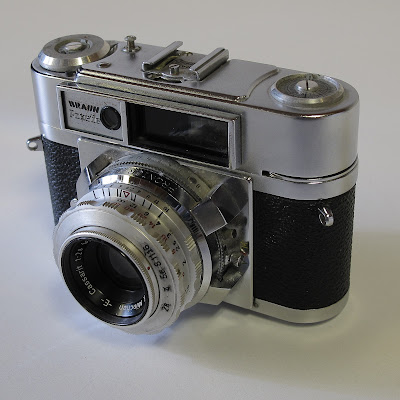 The German Braun company made a number of 35mm cameras, and their Paxette series have a confusing array of names, since it seems that many cameras simply say "Paxette" on them without additional identifying nomenclature. The one pictured above is Super Paxette IIL (note - I originally called this a IL, but the fact that it has an interchangeable lens makes it a IIL, according to McKeown's catalog -- and he should know!), a compact rangefinder camera with a nice metal body. Many of the Paxettes have removable front elements that allow interchangeable lenses, like some of the Kodak Retinas. The rangefinder on this one is out of adjustment, but everything else seems to work just fine. Here are a few images from the first roll of film - admittedly, a long-expired roll of Ilford Delta 400... 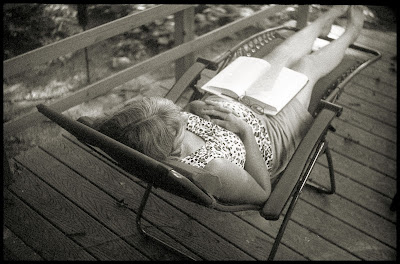 Adrienne on the deck 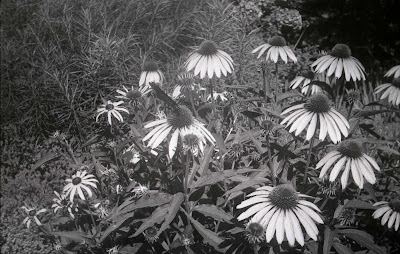 The front garden. Note there is some flare. 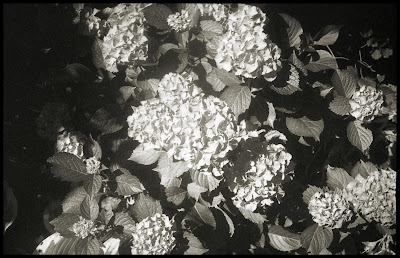 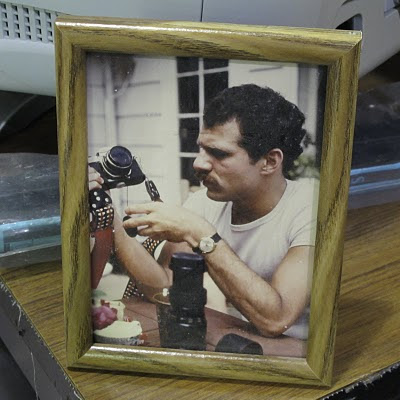 I was at the Ann Arbor Recycle- Reuse Center yesterday. I found some really useful photography books, a Vivitar 75-150 lens for my Olympus OM-1, an AC slave strobe that was new in box, and a Metz 45 CT-4 Potato-masher style flash. I think I spent $30 for all that. One thing I photographed there, but did not buy, was the above photo of a man with his Pentax. The photo looks to be from the early 1980s...note the hippy camera strap. Was this his first SLR? Did he become a good photographer? Was a he a Vietnam vet? Why did the photo end up there? A mystery.
Posted by mfophotos at 8:25 AM 1 comment:

Several months ago, I was contacted by Doug Aikenhead, one of the people involved in the Michigan Radio Picture Project, to see if I might be interested in submitting some of my images for a photo essay. The MRPP website was created and is managed by Nick Meador, and I have to say that it has had a very interesting series of photo essays by a number of photographers since its inception. Well, Doug really liked many of my images that had to do with some of my travels around the state, so we settled on a premise of "Roadside Ramblings." Over the course of the past two months, I put together several assemblages of images, and they were pared down by Doug to the set of 16 that are now up on the site.

For me, a photographer that takes many thousands of images per year, on so many different subjects -- deciding on what set of images to show for a particular idea or project is a daunting task. So, having Doug decide was a good way to do it, and while I might have wanted a different photo here or there, I'll go with his judgment. After doing some rewrites of the text and finally resizing the images for the parameters of the MRPP, I submitted everything and Nick Meador got it all up on the web yesterday. I'm pretty happy with it, as it shows a bit of what I do, and hopefully, it will encourage others to explore our state, too.

I thank my friend Andy MacFarlane of Michigan In Pictures blog for picking up on the MRPP site and linking to my photo essay. Most of the images were shot with "crappy cameras" but a few were not.

So, take a spin over at the Michigan Radio Picture Project and be sure to write them a note!

Posted by mfophotos at 9:30 PM No comments: