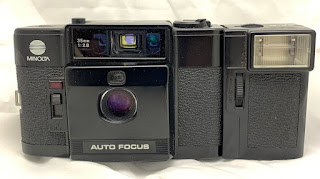 I did not know about this camera until several months ago, when I was working on cataloging cameras from an estate.  I ended up with it, and due to the move to North Carolina, I had put any reviews on hold. Finally, I have been able to develop the roll that I shot with it early in the summer, and here goes my review.

The Minolta AF-C -- an automatic P&S, looks a bit like an Olympus XA and a Lomo LCA.  In truth, it's more like a Nikon 35AF, as there are no real controls of the exposure.  It's a compact 35mm camera with a detachable flash that is very similar in operation to the flashes on Olympus XA series of cameras. In use, it reminds me a bit of a Lomo LCA with the lens cover sliding up and down to cover the lens.  The only thing you can adjust is the ISO setting and the use of the flash unit.  The camera uses active infra-red for the autofocus, and the exposure is completely automatic. 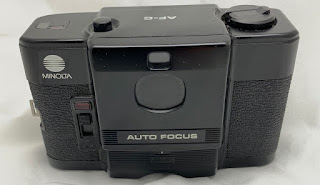 Considering the many compact P&S cameras that were produced in the early 1980s by the likes of Canon, Nikon, Pentax, Ricoh, and others, this camera stands out from all of them with its distinctive styling and compact form factor (only slightly larger than an Olympus XA).  The 35mm f/2.8 lens is a 6 element Minolta lens with good contrast and sharp optics.  It focuses from just under a meter to infinity.

A thumb wheel advances the film, making the camera more compact and there is no auto-rewind, but a manual rewind crank, as with the XA series and Lomo LCA. 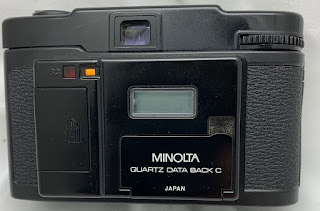 My version had a Quartz Data Back, which I have not tried using as yet.  I'm not a fan of dates on negatives.  The databack makes the camera less svelte and more blocky.

The camera is powered by 4 LR-44 cells, or 2 1/3 N cells.  They fit much better than the Lomo LCA arrangement of 4 stacked cells.

To operate the camera, you push the front cover down, which uncovers the lens and viewfinder.  Advancing the film cocks the shutter, and if you have enough light you get a green LED in the viewfinder when you press the shutter button halfway -- which also sets the autofocus. If there is low light, you'll get a red LED if a flash is needed.  The flash screws onto the left side of the camera.  It requires 2 AA cells to operate. The self timer is on the front of the camera, and a red light flashes in front when in use.

Using the Minolta AF-C was easy, of course, and the lens cover design makes it a pretty rugged little camera. I shot a test roll on Ilford HP-5+ black and white film, and developed it in D-76.

One thing I noted that in some of the frames there is a vertical light stripe about 3/4 across the frame.  That must be some sort of light leak, so I should go and check where new foam will be required. That's not unusual for a camera that's over 35 years old.  The camera has a tripod socket, so using it in low light on 400 ISO film is not a problem, though it is limited to 1/8 sec.

This camera was a freebie, which I really appreciate, as the ones on ebay  are going from $50 to $155 in working order.  It's not an Olympus XA, but certainly works very well as a fully automatic camera.  It's far better than an often-unreliable Lomo LCA, and it's more compact than the Nikon and Canon offerings from the same time.  I think the camera has a very cool appearance, and does not feel cheap or fragile.

Here are some samples from the test roll, all shot in June, 2019. 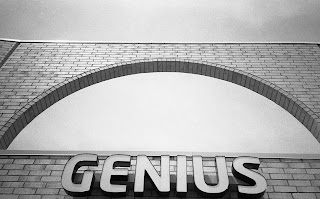 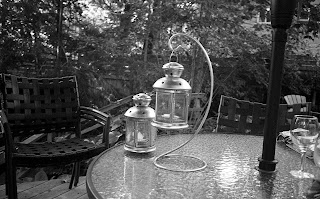 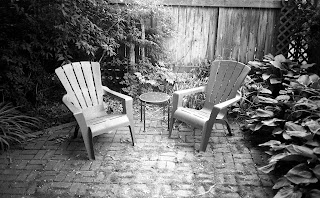 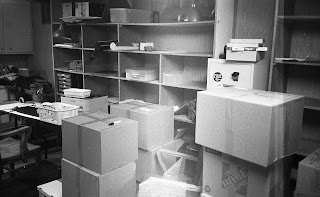 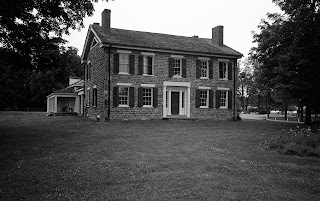 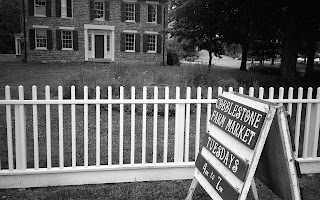 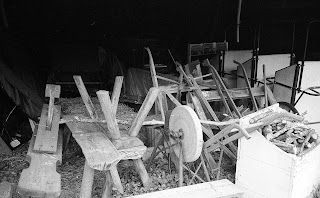 Posted by mfophotos at 2:35 PM No comments:

One of the hardest things about moving to someplace that is entirely new is the disruption in my typical routines and activities.  Of course, I would rather be off with my camera somewhere, but there have been many things around the house that need to be done, as well as trips to visit stores for needed items, and I have seen way to much of a Lowe's lately.  In fact, if I don't have to go inside one for another month, I would be a happy man.  However, we are getting our home to fit our needs, and eventually, all that stuff will be behind us.  We are getting to know our neighbors, and in fact, our neighbor Rachel was pleased to see that I had a manual typewriter. So much so, that she dropped off the book Uncommon Type by Tom Hanks.  I have to say that people here are friendlier and more approachable than in Michigan.  The local food scene is wonderful, and there are lots of great local beers.  The weather has been wonderful, and the mountain skies are always interesting.  Do I miss Ann Arbor? No.  It's easy for us to get around and into town, and every day we find new things.  It's really good that we decided to move here, as it has given us a kick in the pants to not be in a rut, and I feel fortunate that we have been able to do this.

In the past week, I have been doing some photography in downtown Asheville and Weaverville, and found a lovely place to visit at the Univ. of North Carolina Botanical Gardens, about 10 minutes from our house.  Reed Creek runs through the gardens, and the terrain is quite interesting.  Getting out for some "me" time is important, as I need to explore the area, and think about the type of photography that I want to do. I'm away from all of my old photo friends in Ann Arbor, and it will take a while to have that same film user community here that I had back in Michigan.   Lance King, from Tennessee, contacted me a couple of weeks ago and told me about a cool place in Marshall, NC and gave me some contact information.  I contacted the owner of the Makers Circle, Susan Patrice, and yesterday I drove over to meet her and see what the place was all about.  It's only about a 25 minute drive from my house, and it's in the lush mountains NE of Marshall.


Susan Patrice runs the Makers Circle, and it's an amazing place with an alt-process darkroom, regular darkroom, a big digital work space, and room to house people that want to do a residency there. She's extremely knowledgeable and is a fantastic working photographer.  Her work is immediately notable in that most of her images are circular. We spent almost 3 hours talking photography, and it was such a great visit for me.  I may end up using the darkroom there until mine gets set up. It is amazing  that there is such a great resource just a short drive from my house!  I learned a bit about local resources too, and my next visit will be to Ball Photo in Asheville, where they apparently have LOTS of film cameras and accessories.

Today, we finally went to the North Asheville Tailgate Market, which is a farmer's market that sets up on Saturdays on the UNC Asheville campus. One word- fantastic - describes the market.   It really was a feast for all the senses.  It reminded me of the Farmer's Market that I went to in Portland, OR, though not as extensive.  We bought some produce, some bread and cheese, some things to plant, and I spent $3.50 to buy a huge bell pepper that Weston would have envied.  Now I need to set up some lighting and space to photograph it on 6x7.  Then, we'll eat it. 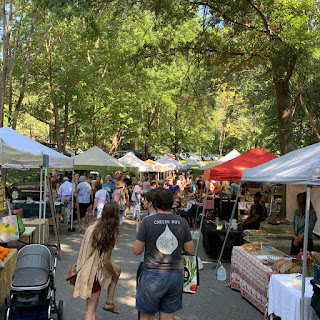 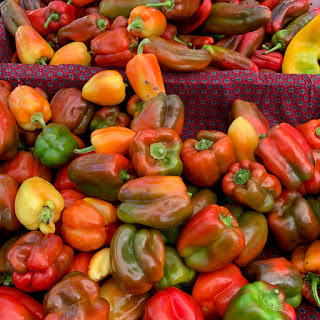 So, yes, this is starting to feel like home, and I am looking forward to many new adventures. 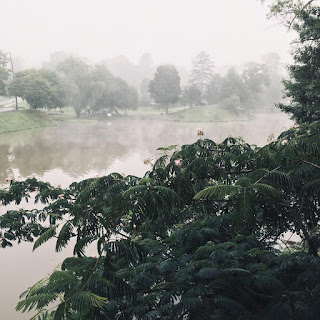 We arrived in Weaverville, NC on the evening of July 20.  Our moving semi-trailer arrived on the 22.  Since then, it has been getting things unboxed, put away, set-up, and all the things that you have to do after moving.  Yesterday, I spent the morning waiting to get a NC driver's license and plate for the car. The cool thing is that the driver's license is good for 8 years!  In any case, I have been way too busy with things other than photography, though I have shot a bit when I have had the chance.  Last week a particularly foggy morning gave me the idea to go into Weaverville and visit the Lake Louise park where I not only got some nice foggy photos, but also discovered there is a nice waterfall not far from the road.  As we get more settled in, I'll be able to do more photography, and I look forward to that.  We get our washer and dryer delivered Saturday, which will be a welcome event!  It will be many months...maybe a year before I have a darkroom constructed, but in the meantime, I can develop film in the bathroom in the basement.

A year ago, the idea of moving out of Michigan to NC was still somewhat abstract.  The reality is that I am now here, and I am embracing the the change.  Sometimes it takes a major event to change your life, and it can be a positive or a negative thing.  I am fortunate that this is a positive change, but it doesn't mean that it is easy.  Eventually, all my stuff will be where it should be, and I'll be doing some good work with the cameras.

I do love these mountains in NC, and the people we have met have been very welcoming and very nice.  We look forward to many new adventures!
Posted by mfophotos at 9:29 AM 1 comment: