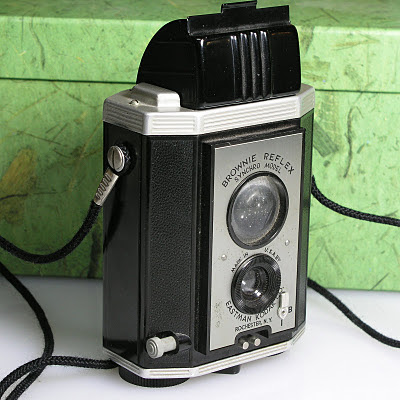 I have divested myself of most of my 127 film cameras, but the Kodak Brownie Reflex I have recently shot with is one that sat on a shelf for a number of years before I finally put some film in it. I had a roll of 40+ year old Kodak Verichrome Pan in 127 size,(the best film ever for box cameras), so I figured that I may as well finally try out the Brownie. While it looks much like a TLR, it's really just a box camera with a reflex (mirror) viewfinder. My camera is a bit grungy on the viewfinder part, but the taking lens (a simple meniscus lens) is clear. Note that the camera has I and B settings - for "Instant" and "Bulb". The frames are square 4x4 cm, with 12 exposures on a roll. The model I have is the "synchro" version, made from 1941-1952, meaning that it accepts a clip-on flash unit. The body is mostly made of black bakelite, and it really is a stylish box camera, complete with neck strap. I started the roll of VP127 back in June, when my daughter Jorie and I went on a photo safari to Indiana, and finally finished the roll yesterday by taking some shots in Ann Arbor. I developed the film in Kodak DK-50 1:1 for 6 minutes. That particular developer seems to work really well with old Verichrome Pan. I like the square format, and considering the age of the film AND the age of the camera, the results are pretty decent. 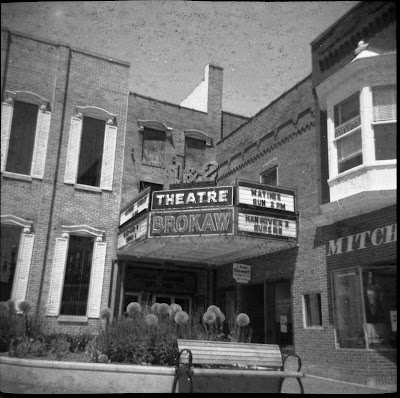 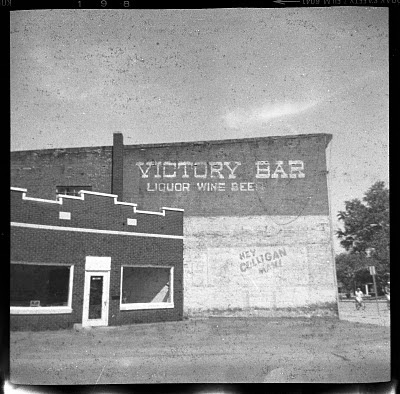 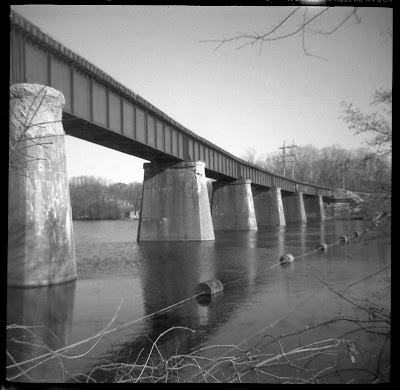 The railroad trestle near Argo dam, Ann Arbor. 12/26/2011. Note that this, the last image on the roll, is quite free from the markings found on the beginning of the roll.

I might shoot 127 more often if it were not for the fact that the only b&w film is Efke, and that 127 film is a pain to scan, as there are no film holders for it. However, I certainly have enough 120 and 35mm cameras to use, and 127 remains a rarely-used format. At one time, it was quite popular, and pretty much died out as a consumer film once Kodak brought out the Instamatic cartridge in 1963. There are still some beautifully-made 127 cameras that are worth trying -- the Sawyers 127 TLR, the mini Rollei, and the Ricoh Super-44. Such compact TLR cameras are fun to use, and produce excellent results.

If you are a collector of cameras, or a user of vintage cameras, there is one model that you should own -- the Kodak Retina IIa. You really would be hard-pressed to find another camera that fits in a pocket, has an all-metal construction, completely manual, and has a 50mm 2.0 Xenar lens. 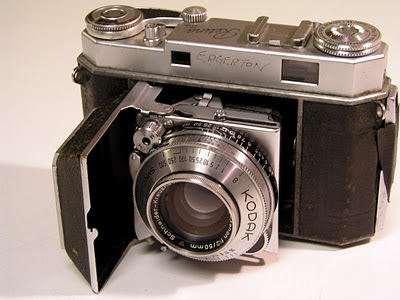 First, a little bit about the Retinas. With the exception of the Kodak Ektra, The Bantam Special, Medalist, Chevron, and the Super Kodak Six-20, Kodak's premier metal-bodied cameras came out of the Nagel factory in Stuttgart, Germany. Eastman Kodak purchased the Nagel Kamerawerk in 1932, which became Kodak A.G. The first camera from the factory to use 35mm film was the Retina I, which appeared in 1934. A long series of cameras with the Retina (and lower-priced Retinette)designation appeared, ending with the Retina Reflex Instamatic camera in the 1974.

While other Retina models followed the IIa with advances such as meters, better rangefinders, and interchangeable lens elements, I think the IIa best embodies what makes a pocketable 35mm camera of its combination of quality and features. The strut-mounted lens allows the cover to collapse over it, protected from just about anything. The Schnieder Xenon f/2.0 lens in a Compur shutter with speeds from B to 1/500 sec., with X flash synch is excellent. The Retina IIa was sold from 1951-1954, meaning my two examples are both nearing 60 years old. Yet, the smooth operation of the camera and near-silent shutter is far better than many cameras of more recent vintage. The Retina IIa also features a "cold shoe" for use with an external flash (using a PC synch connector near the edge of the lens), or one could possibly use an external albada viewfinder for easier framing. Like many of its contemporaries, the Retina IIa viewfinder is rather squinty. Glasses-wearers are always at a disadvantage with the small viewfinders. The RF focusing patch works pretty well, except in low light situations, such as when I took these flash shots at a recent Ann Arbor Crappy Camera Club meetup at the Wolverine tap room. I used a small flash bracket and a modern Sunpak flash with a diffuser. The flash was set on Auto, and the camera was set at f4 and 1/50 sec to catch ambient light in the background. The beauty of a Compur leaf shutter is that the flash syncs at every speed.

This shot by Ross Orr with his Fuji 6x9 (Texas Leica) and Tupperware flash shows me with my Retina IIa setup:

This camera has the name "Edgerton" inscribed front and back. I bought this camera at an estate sale of a long-time collector in the Detroit area. I often wonder if Harold Edgerton had previously owned the camera. That would be pretty darn cool. My other Retina IIa was given to me by Bill Brudon in 2001, and that one is in even better shape, but the rangefinder needs to be adjusted.

Finally, a few samples of the shots taken with the setup described above, using Kentmere 400 b&w film: 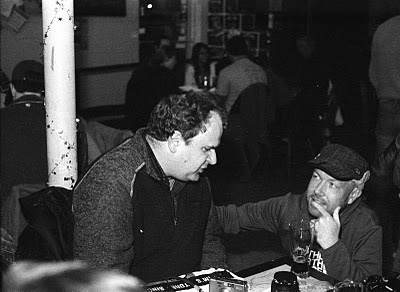 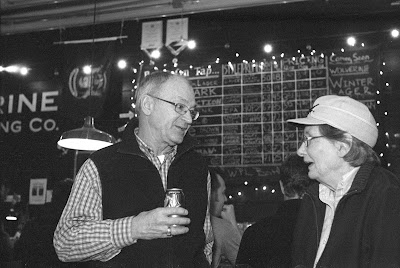 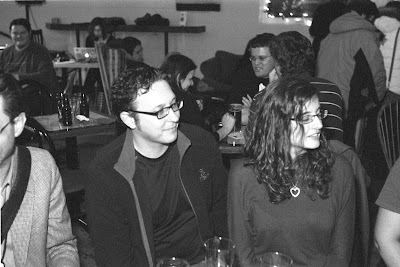 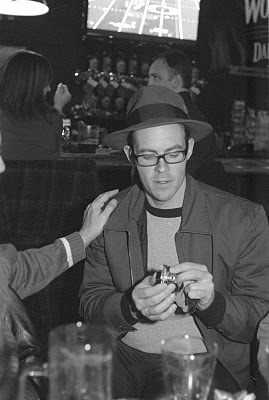 Olympus has long made some legendary cameras. While the OM-1 and its descendents qualify as some of the great compact 35mm SLRs of all-time, some "lesser" cameras are deserving of cult status. Consider the Olympus Trip 35 -- Not a whole lot to adjust. It needs no batteries, as a selenium cell surrounds the front of the lens. There are two shutter speeds - 1/40 sec and 1/200 sec, as the camera operates in "A" mode unless you set it for flash (at 1/40 sec). A zone focus camera, you can see where you have it set for via a small window that shows in the viewfinder. A thumb wheel advances the film. The shutter is pretty silent. In terms of a "stealth camera" - this one really fits the description. The 40mm f/2.8 Zuiko lens focus from about 3 feet to infinity, and is a Tessar design. The ISO range adjusts from 25 to 400. There is a PC socket and an ISO hot-shoe for flash. Some limitations, to be sure, but I have seen some really fine images taken with the Trip 35. Of course, the camera has a durable metal body and very classic styling. I think it's one of those under-rated cameras that have achieved cult status simply by doing a pretty decent job with minimal controls. A minimalist street camera that has auto-exposure. Not too shabby. 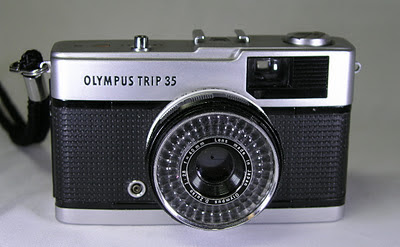 I haven't shot much with the one that I have, and that's probably just because I have too many cameras to give every one of them a lot of use. If you find one for sale, test the electronics by opening the back and pointing the camera toward a shaded area. If it's all working correctly, the lens ought be be wide open where it's darker and at its minimum in the sun. Here are a few images from mine.

How does the camera stack up with an even smaller camera such as the XA? The XA has a slightly wider field of view, is more compact, but depends on a battery for the shutter to operate. The Trip 35 has a more classic rangefinder styling, and looks remarkably a lot like the new digital Olympus Pen series. If you find one, have fun using it. Maybe you'll surprise yourself at how capable the camera really is.