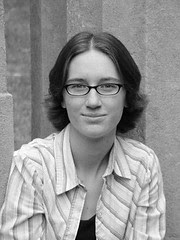 trying to decide
Originally uploaded by argusmaniac.
If you are the parent of a child that is a high school senior this fall, then you have undoubtedly received mail from local photo studios looking for your dollars. A LOT of dollars. Some unabashed lines such as "the most important photographs of your life" had my daughter Marjorie cracking up. She sees through the charade of salesmanship to know that you do not have to spend between $500 and $2000 to get your senior portraits done. She's lucky, and so am I, since I am a photographer, and so is Marjorie. I don't wish to demean other photographers -- they are in a business to make money, and that is their only job. So, whatever angle they put on taking senior portraits to make a buck and support their families is fine. But, I know I can take portraits, too.

I spent a few hours over two days shooting her in several locations. She wanted b&w only. I shot mostly with digital -- in b&w, too. She could look at the screen afterwards while I was shooting and decide if she liked what I was getting. For the most part, I was amazed when I saw the images on my computer and then printed out. She was no longer the "kid" -- I was taking portraits of a young woman at the beginning of a new phase in her life. So, maybe they are not the most important photographs of her life, but as I look at them, I know they are the photos that demarcate the girl from the woman.
Posted by mfophotos at 9:01 AM 1 comment:

Dave, We Miss ya! 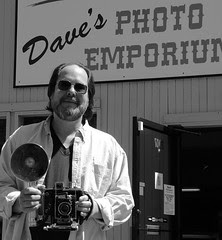 The end of an era
Originally uploaded by argusmaniac.
For many years, we had Dave Kozyra in town, either at Studio Center Photographic, or later, when he bought the business, and it became Dave's Photo Emporium. It was a sad day back on April 16, his last day of business. It was the best place to exhibit photographs in town, as well as a fun store to buy used and antique camera gear, talk shop, or rent a Hassleblad...

I realized I had not posted this earlier, when it was more timely, but I forgot that I had taken this shot of Dave in front of the store. Nonetheless, Dave left a void that has yet to be filled... both in camera gear and in having an accessible gallery.

Whatever Dave is doing now... I hope he is happy not to be minding a store, but he is missed by many of us!
Posted by mfophotos at 2:04 PM 1 comment:

Back on June 16, 2005, Eastman Kodak announced that it was "discontinuing" the production of its silver-based black and white printing paper. Kodak said it will stop production of the b&W paper at the end of this year. But the world’s biggest film manufacturer will continue to make black-and-white film and chemicals for processing. As the industry shifts rapidly from chemical-based to digital imaging, "demand for black-and-white paper is declining about 25 per cent annually and Kodak could no longer justify being in the market", Kodak spokesman David Lanzillo said.

Thus ends over a century of Kodak's production of black and white paper. Kodak’s original papers were made for “paper negatives” but for printing positives, they marketed a printing out paper (POP) that was used to make contact prints from larger negatives. Most missed by today’s fine-art printers will be some specialty papers, such as their Azo and Polycontrast Fine Art papers. The bulk of Kodak’s paper production is for the commercial photofinisher market, which uses little of no true b&w paper. However, as a practicing black and white photographer, I confess that I rarely use Kodak paper, instead buying papers made by Ilford and others.

Kodak's decision will undoubtedly convince some that the death-knell of film is upon us, and the death rattle of 35mm film cassettes can be heard in the shadows. I disagree. Kodak's problem is that they are trying to become the Digital Imaging Company the way they were the Film and Paper Company. Unfortunately, there are many competitors in this arena, and Kodak will be slugging it out with Fuji, Canon, HP, Kyocera, Nikon, Konica-Minolta, etc. Dumping their b&w paper production is probably not the big loss that some think it is -- Ilford, Forte, Kentmere and others will be afforded what market remains, and they will fill it in a manner more beneficial to photography enthusiasts. Here is what Kodak should think about doing -- spin off the silver-halide part of the company and call it Yellow-Box Classic or something, and have it become more of a niche company, catering to the Fine art and amateur world. Sure, very few commercial photographers are using b&w paper and film any more, but that does not mean there is no market.

The big unanswered question here is -- what will Kodak do next? There will always be a market for silver-based photography. Whether the product has Kodak's name on the box or Lucky Film from China remains to be seen.
Posted by mfophotos at 1:17 PM 1 comment: 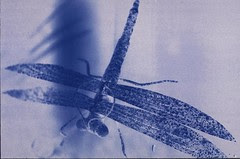 Polablue dragonfly
Originally uploaded by argusmaniac.
PolaBlue is a weird film. It was (is?) made to produce reverse text slides with a blue background. Therefore, it's a hi-res and hi-contrast film. Also slower than molasses with an ISO of between 8 and 10. I was given a couple of packs of it -- each package has one roll of film and a processsing cartridge. You expose the film and put it and the developer cartridge into the Polaroid Autoprocessor unit..turn the cranks, and voila! in 5 minutes you have developed film that can be used for slides. A great idea for quick slides in the pre-digital photography world -- I recall using this film in the early 1980s for a presentation.

Now however, PolaBlue is an anachronism. I don't know if it is still being sold. The film had an expiration date of 1992, so I figured that I would try a roll out as a slow pictorial film and go for the weird effects. Before I tried it out on something that took planning, I tried a roll out in my yard. To be honest, I am amazed that it was still working. So what you see here is a shot of a dragonfly lawn ornament. The really cool effect was after I scanned the slide and inverted it in Photoshop. That gave me this image.

So, I will save the next roll for when I will be shooting something with lots of hi-contrast forms. That should be interesting, and I'll know what I got within 5 minutes...

Walker Evans is on the Way

I just found out that the UM Museum of Art is showing a Walker Evans (1903-1975) exhibit! It's basically a retrospective of James Agee's and Evans' collaborative work, Let Us Now Praise Famous Men, which appeared in book form in 1941. I always liked Walker Evans' images, and there is a good biography of him by James R. Mellow. The Agee-Evans venture is an interesting book, and I think without Evans' images, Agee's prose would lack the impact that's provided by the photographs. It's hard to imagine that sharecroppers could be so dirt poor, and in the context of the Great Depression, maybe they weren't quite so bad off as some. And I have to wonder -- if white sharecroppers were that bad off, how bad did African-Americans have it? Something to think about.

I look forward to seeing the show!

Addendum -- I first viewed the exhibit on 10/28 -- it's an excellent show with 78 prints and ancillary letters and documents. Well worth seeing Evan's original prints, many of which did not appear in the book.