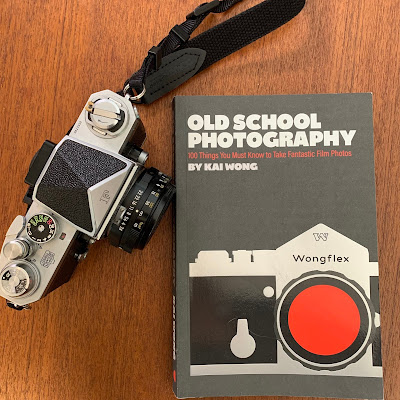 To be honest, I did not expect to like this book, seeing there are so many “how-to” film and photography books out there.  However, Kai Wong has done a great job of separating out 100 topics  at one page apiece, and providing a breezy, yet coherent approach to shooting with film.  I have seen a few of his YouTube videos, and after seeing this book on several Instagram feeds, I ordered a copy.   While the book is aimed at the novice, I think there are sections that would be useful for many photographers to read.  People are used to reading short items in today’s media, so this book achieves several objectives - teaching how to shoot your film cameras, choosing a camera, choosing a lens, choosing a format, and then, using the camera and how to achieve good results.  All in single-page bites, which can be easily found in the table of contents. His approach to the subjects is a fun read, and I found myself in agreement with pretty much all that he said.

I do think he focused on “glam” cameras such as the Contax series -- overpriced electronic point and shoots that would quickly blow a beginner’s budget, and might also die an electronic death.  Instead, I’d suggest a Minolta Hi-Matic AF2, Olympus Infinity, or a Nikon One-Touch 35 AF.   Likewise, While I agree that the Nikon F and F2 are great SLRs -- I’d recommend a Nikon FM2N over either one as a great SLR for someone coming to film.

Each section is also accompanied by a photo on the opposing page, which adds to the reader’s enrichment, and serves to accentuate each instructional page.  Many, but not all, were taken by the author.

My only real criticism is on Item 33 - Sunny 16.  It provides a table of three film ISOs, 100, 200, and 400, and as shown is entirely wrong.  The shutter speed stays the same for a given ISO - yet this table would have you vastly underexposing your images were you to follow it.  I don’t know if it was just something missed in editing, but it’s flat-out wrong. Wong is wrong on this one.

Kai repeatedly makes the case about not getting caught up in a never-ending upgrade process, and that’s a fair point.  Get to use a camera well, and then you'll find out out what if any, limitations it has. My view is always that the most important component is the person holding the camera, not the camera itself.   He sticks to what the average new enthusiast might want to explore, so 35 mm gets a major part of the discussion, and I agree with that.  The three lenses in your bag is a good philosophy, and while I don’t always practice it myself, I agree with it.   The creative process is not ignored, either, and Kai covers it well, within the confines of the book’s format. Overall, Kai Wong has put together an easily digestible manual for beginning photographers wanting to explore using film.  The resources in the back with web links, etc, are also a great addition.

This book would make a good gift for the aspiring film user, but you might want to include a proper sunny-16 chart or the Black Cat Exposure Guide along with the book.

Fifteen Days On The Road - Part 1

Lots of film to process, lots of film to scan!  I shot 35 rolls on this trip, and used every camera that I brought.  I decided to send out the C-41 and E-6 rolls to The Darkroom for processing while I was on the trip, which meant that some arrived home before I returned.  I am just getting started on scanning those.

A few days ago, I returned from my first lengthy road trip since COVID-19 took over.  The ultimate goal was spending a week in Tucson, AZ, and visiting our daughter.  I planned the westward trip trip pretty well, allowing plenty of time for me to finally visit some places along Route 66.  This was our first trip West starting from western North Carolina, so naturally, Route 40 was the main Interstate that we drove.  We elected to drive my wife's Toyota Corolla Hybrid, since it's been proven to be comfortable for long trips, and at worst, it gets over 50 mpg.

We left October 5, and our first night was in Forrest City, AR, not too far past Memphis, TN.  Our mileage for the day was 557 miles, with just rest stops along along the way.  Forrest City was named for Nathan Bedford Forrest, who used the location as a campsite for a construction crew completing a railroad between Memphis and Little Rock, shortly after the Civil War.  As we know, Forrest was a Confederate Army general, who said "If we ain't fightin' to keep slavery, then what the hell are we fightin' for?"  Leaving little doubt about his feelings, he was the Grand Wizard of the KKK after the Civil war.  While Forrest City is just a spot on the map,  I think about the history of places that we visit, and the reasons for place names being what they are. 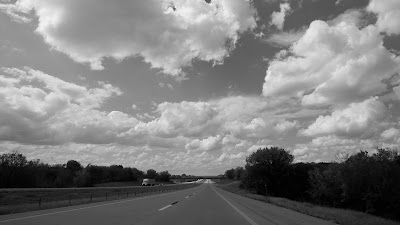 We made good time on Day 2, traveling 512 miles, to spend the night in Clinton, Oklahoma, which is right on the old Route 66.    Once I-40 hits Oklahoma City, it joins/replaces the old Route 66.  Clinton was formed in 1902, and was originally called Washita Junction (railroads play a big part in its formation), but the U.S. Post Office would not accept Washita Junction as a name, so it was changed to Clinton, the first name of Judge Clinton Irwin.  Unlike many places along Route 66, Clinton is a thriving community, and is the largest city along Route 66 between Oklahoma City and Amarillo, TX.  We stayed at a La Quinta motel which was really nice, and it even had a bar.    I took some time to see some of the Route 66 business area, and found the Glancy Motor Hotel, which was in sad shape.  The Oklahoma Route 66 Museum is located in Clinton, but as we got there late in the day it was not open.   Nonetheless, I got some pretty good shots of the places we visited. 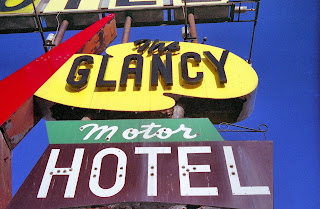 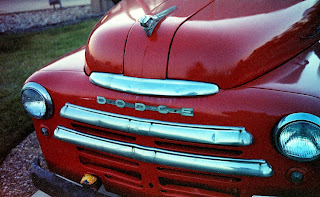 Day 3 was the fewest miles traveled, because it involved a lot of stops along Rt. 66, but it also covered three states, as we left Oklahoma to pass through the Texas Panhandle (the absolute shortest path across Texas) and enter New Mexico, where we planned to stay the night in Tucumcari, NM.  I had originally planned to spend the night in Erick, OK, and am glad we stayed in Clinton.  Erick marks the 100th Meridian, which essentially marks anything beyond as "the West."  There is a 100th Meridian Museum in Erick, and it was closed.  It's probably more famous as being the hometown of singer/songwriter/performer Roger Miller. "King of the Road" was in my head was too often.  There is a terrific mural featuring him on what may have been the Roger Miller Museum, which closed long ago. The mural is in excellent shape, but I can't say that for the rest of Erick.  A casualty of Interstate  40, and the ceaseless loss of residents to more urban areas, Erick has certainly seen better days.  Those people staying there now are hardy folks. 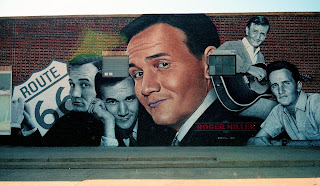 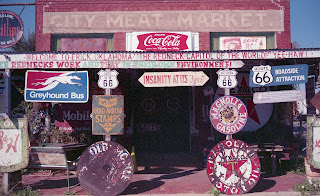 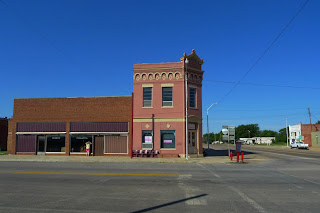 We traveled for a bit on the old Rt. 66 which at times is an I-40 business route and at others, a parallel service road that is barely maintained. It was great to be on the two-lane, grasshoppers smashing into our grille, the grasses whizzing by.  Our first stop in Texas was in Shamrock, a town that has wholeheartedly embraced the Route 66 theme.  I primarily wanted to see the famous Conoco gas station, and was not disappointed.  The U-Drop Inn and gas station is an Art Deco wonder, and was saved from ruin and disrepair by he First National Bank of Shamrock, which gave it to the city. After a $1.7 million federal grant, they restored the building to its original condition and adapted it into a museum, visitors' center, gift shop, and the city's chamber of commerce.  We enjoyed a very tasty chocolate milkshake there. 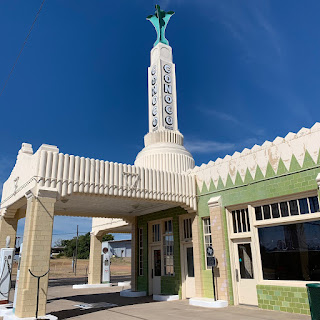 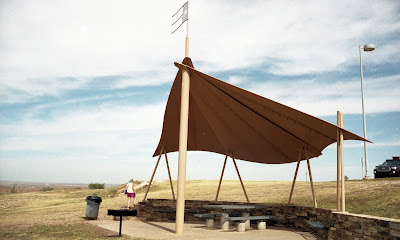 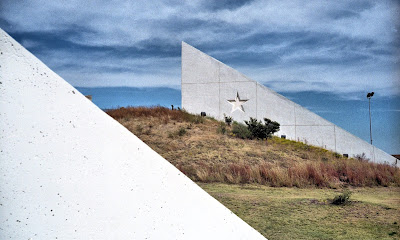 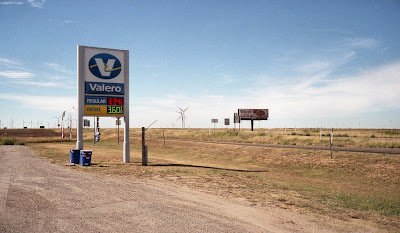 We hit the Texas Visitor's Center and rest area that's on I-40 east of Amarillo, and it was definitely photo-worthy.  After that, we drove past Amarillo (Had we chosen to stop there, it might have been another day before we left!) and across the rest of the panhandle.  I was amazed to see the hundreds of wind turbines there.  It's obvious that not all the money in Texas is being made on petroleum-based energy.  Also struck by the huge expanses of cotton and sorghum fields.  We stopped briefly in Adrian, TX, which marks the mid-point of Route 66.   The most impressive thing I photographed there was the grain elevator.

We made it to Tucumcari, NM with plenty of daylight left, and found a lovely room at the Roadrunner Lodge Motel, an original Route 66 motel that's been lovingly restored/maintained by its current owners.    Tucumcari is one of those Route 66 destinations that you really have to visit.  There's a lot of period architectural and neon eye-candy to keep one occupied.  While I-40 bypasses it, Tucumcari is big enough and charming to make you want to explore it a lot further.  I'll end this travelogue here, as New Mexico is an adventure by itself.

Posted by mfophotos at 1:36 PM No comments: