Pinholery in the Irish Hills

On Sunday, April 26, the entire world celebrated World Pinhole Photography Day (WPPD). Well, at least the small world of photographers using pinhole cameras did. Our world is sometimes a bit fuzzy, but everything is in focus, and we expect events to happen at a slow pace.
Mike Myers and I went down to the Irish Hills along US-12, in search of some suitable WPPD subjects, and found some decrepit places to shoot, such as the Irish Hills Fun Center as shown above. Formerly a place where one could race go-karts, play mini golf, and take a dip in a pool, it now looks abandoned. The one place I really wanted to see has all sorts of life-size dinosaurs and prehistoric mammals on the grounds, but it is ringed with "no trespassing" signs. Better to stay out and avoid a visit from the local police.
We finally ended up at McCourtie Park in Somerset. This place was built by a former concrete baron, who, in the 1930s, had artisans from Mexico construct a series of small concrete bridges across a meandering stream. You might think it wouldn't be interesting, but each bridge is different, and they fool your eye -- looking like rustic wood brdges, a rope bridge, and so on. What looks like bark with beetle holes is just concrete. You expect the rope bridge to sway, but of course, it's not really rope, it's concrete. Fun to visit, and quite photogenic.

Gifts that keep on giving

Last month, I was given a spectacular gift by an old friend. My one-time photographic mentor, Bill, is going to be moving to Hershey, PA, with his wife Margaret. Bill's not doing so well, and has not been able to use any of his wonderful cameras for a while. I'm helping him a bit, by visiting and getting him to remember events and his long-term memory isn't so bad, but short-term varies greatly. He's already parceled out most of his gear to his grandson (a pretty good photographer), and his sons, and of course, to me as well. I'll try and help him deal with some of his remaining gear and books, etc., but I know it'll be frustrating for him. Of course, I will miss him once he leaves the area, and there is always that unspoken acknowledgment that there are not many years left in him. I'm more accepting of that than to see a fog descend over someone's mind, and render memories into fugitive moments that may or may not reappear.
I do what I can to keep Bill's mind engaged-- I send him a typed letter every week or two along with a photograph to let him know that I am very much engaged in photography. I know he appreciates them, as he has mentioned that more than once, and unlike a conversation, he can read them again and not have written words fall off into a chasm.

Bill had previously asked me if I had a Nikon F3, and that he had a case of Nikon gear that I should take with me. I had always delayed the topic, feeling that he had already given me so many great photographic things, that I felt guilty about bringing it up. In late March, we talked at length, and Bill told me to go to the closet and pull out the aluminum case that had the Nikon tag and take it with me. We would get to the other bags and boxes at a later date before the move to PA. I was hesitant to even look in the case, but when I opened it, and saw the mint F3HP and FM2N and lenses, I knew that he had probably run film through those cameras only a few times each. It was my duty to become the custodian of that equipment and use it and appreciate it, just as Bill would have if he'd been able to do so.

So, just as Bill's other camera gifts to me gave me so much enjoyment over the years, the Nikon F3HP and FM2N and lenses will keep on giving me some of the best tools for making photographs that a film-loving nut like me will need. The 85mm f1.8 Nikkor AF-D lens is another one that I had wanted for a long time, as it is great for portraits on film and digital. The F3HP's high-eyepoint viewfinder is wonderful for a glasses-wearer like me, and the difference between that and any DSLR finder and most film SLRs is simply something to be experienced.

My best tribute to Bill will be continuing to keep on photographing, and to help others out by mentoring, when possible. It's the gift that keeps on giving.
Posted by mfophotos at 11:32 AM 2 comments:

Back in March, I found an ebay seller in Hong Kong that was advertising the Holga 135BC at about $18 + the same for shipping. At first I thought the shipping was too excessive, but then realized it was still cheaper than buying the camera from any US vendor (and not including shipping)! So, I did a "buy it now" and a few weeks later, the camera arrived from China. 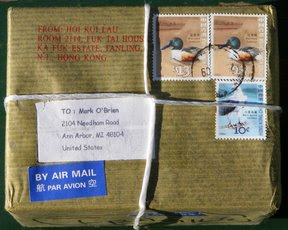 The Holga 135BC takes 35mm film and has a build very similar to the latest model Holgas that use 120 film. A 47mm glass lens with an f/8 aperture, B+N shutter, and focus from about 4 feet to infinity. There is a spot for a screw-in cable release on the shutter button and a tripod socket. The "BC" means "bent corners" or vignetting on the corners, which is achieved by a cutout behind the lens with a dot-pattern to cause the slight vignette. I like the feature of being able to do multiple exposures without advancing the film, and the B setting is pretty handy.

I like the way the camera feels in my hand, and though I only have one roll of film through it, I like what I see so far. I shot with it at an overcast day at Festifools in downtown Ann Arbor on April 5, and finished the roll at the Ann Arbor Area Crappy Camera Club meeting at the Corner Brewery in Ypsilanti on April 7. For those, I used a Vivitar flash.

It was pretty overcast for 100 speed film that day, so I would recommend 400 if shooting in dreary weather.

One shot from the A3C3 Meeting:

Right now I have a roll of Plus-X Pan in it, and will probably load it with some Eastman 5222 (250 ISO) after that. The camera doesn't feel cheap like those plastic Vivitar cameras, and if the US vendors could get these on the market for $25 each, they would sell a ton of them.
Posted by mfophotos at 12:37 PM 3 comments:

It's easy to get into a rut this time of year -- winter has been lingering, and it's frustrating when one would like to be out photographing and things are still rather blah.  Giving yourself a photography assignment  is a good way to get out and do some shooting and try something different. Last month, several of us Ann Arbor Crappy Camera Club members thought up assignments that people could choose to do before the April meeting.  One assignment was to photograph shoes or footwear in an unusual setting, and unattached to the feet.  I came up with an alternative assignment which is a bit different.  Take a photograph. Now, close your eyes and turn about 360 degrees, put the camera to your eye, and keeping them closed, take a photo.  Now open your eyes and see where you are and where the camera is pointed.  It's not really blind photography, because we are using our sense of place to take the next shot.  Of course, it's amusing to see how far off we can be.  Does the sightless shot differ appreciably from the first one?  Is it better or worse?  How close to the original pose were you?
Using my crappy Vivitar PN400 plastic camera (which is wide-angle), I took a series of photos, some of which are shown below.    You decide which is better -- the first image with eyes open or the second one with eyes closed. Click on an image to see it full size.

Kodak to Reissue the Brownie Camera

Rochester, NY -- The camera that spurred on the amateur photography boom at the turn of the last century, and turned Eastman Kodak into an iconic symbol of prosperity and photographic prowess, is back. Yes, the Kodak Brownie. It assumed various forms after the initial wood and cardboard box camera, but the premise of simplicity and "You take the picture, we do the rest" remained, no matter what form the camera took. From the box brownies to the Pocket Instamatic, the Brownie camera became a symbol of simple, yet adequate snapshot cameras. 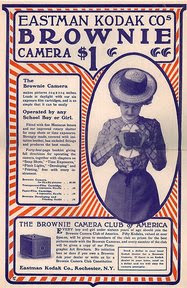 "We realized that the Holga and Diana cameras now being sold as film cameras of choice for the hip, young arty photographers are introducing a new generation to shooting film." said Lou Wratten of the Consumer Products division of Kodak. "Despite the popularity of the Holga and Diana cameras, they really are nothing more than cheap Chinese-made pieces of plastic with no more complexity than most Brownie cameras that were made by Kodak. We feel that rather than the Brownie being a symbol of Kodak's past, it should be reintroduced to a new generation that grew up on digital cameras and want something more from photography."

Kodak has not manufactured cameras in the US for nearly 25 years, but given the current economy, a small plant in Rochester, NY will be able to operate at a profit manufacturing the new Brownie camera. Sources within the company indicate that the Brownie will use 120 roll-film, just as the Holga and Diana cameras currently do. The camera will utilize a single meniscus lens for that sweet optical character that was typical of the early Brownie cameras. Unlike the earlier Brownies, the camera will not be made of wood and paper, but will be high-quality injection-molded plastic, and look very much like the box-like Brownie cameras made 100 years ago, except that they will be available in a variety of color schemes that will complement the hip fashions of today. A basic all-black version should be popular with older users wanting to rekindle their love for simpler days with a camera. An advertising blitz will be aimed at younger users and Kodak expects to offer something that the Lomo and Holga people do not have, and that is a processing service. According to Wratten, "We have heard from current Holga and Diana users that are frustrated by the lack of color film processing labs and the lack of support from the Lomographic Society once they have purchased a Diana or Holga. Kodak has the infrastructure and experience to offer a mail-in processing service that will not only develop and print the images made from these simple cameras, but will furnish online scans from the negatives that users can then upload to photo-sharing sites such as the very popular Flickr."

Sources at Kodak indicate that the new Brownie, with a manual, 2 rolls of the new Ektar 100 film, two processing mailers, and a presentation box with a Brownie time-line imprinted on the outside, will retail in time for the holiday season at a price of between $59 and $89. Kodak's page on the Brownie history is here.
Posted by mfophotos at 12:01 AM 7 comments: