As paraded about online by a variety of news sources and bloggers, and of course, Kodak itself, EKC has announced the discontinuation of Kodachrome. I know there are some angsty, angry people here and there, but anyone that's serious about photography saw this day coming long ago. I'm surprised that it has taken this long. I was more upset about the killing of Panatomic-X and Techpan (I have a big stash) and Verichrome Pan. With Kodachrome, I give a shrug, and will make sure those two undeveloped rolls of KR-64 that I have get sent off to Dwayne's in Kansas real soon. You'd think that being a film lover, I should shed a tear over the demise of Kodachrome. But, I am not. Let's be honest here. In the grand scheme of things, shooting transparency film has been on the decline with today's digital cameras. Kodachrome, being a niche product, has been declining in usage for years, to the point that only one place in the entire civilized world can process it. For those bemoaning the loss of Kodachrome, I have to ask how many rolls a year do they shoot? It's not in 120 size, which is what I am shooting if I am going to be using transparency film. If Dwayne's Photo in Kansas got wiped out by a tornado tomorrow, there would be no processing ever. Finis. Done. Dead. Gone. Sure, I liked the film, I recognize its quality, but I also would rather Kodak keep improving and offering us more films that I use on a weekly basis, and can get developed easily, such as the Ektar 100. I would be horribly upset if Kodak dropped B&W films. Those are something that digital does not replace. Color, however...


In its day, Kodachrome set the bar for color, and millions of weekend photographers documented their vacations. National Geographic showed us the world through Nikons, Leicas, and Kodachrome. Edward Weston made some beautiful 8x10 Kodachromes near his home. Aside from its archival properties, as evidenced by its 74-year run, it's a complex process that is not terribly environmentally friendly. Color-wise, it preserved the post-war America, and for that, I am grateful. It's time to move on and keep buying Kodak's newer films. I'll look back at Kodachrome fondly, but I'm not crying about its loss.

The Nikkormat series of cameras were solid, well-made all-metal SLRs from Nikon from 1965 through 1978. The most widespread and esily obtained model is the FTN. With the metal-bladed copal square shutter, and speeds from B to 1/1000 sec and a center-weighted 60:40% meter, it is a dependable workhorse of a camera. The only downside, is the use of mercury cells for the metering, which can be overcome with one of the C.R.I.S. adaptors to allow the use of silver-oxide batteries - well worth the expense. Mine still has a mercury cell in it.
I have been shooting with it again -- using color print film, and getting it developed and scanned at Walgreens. I paid 50 cents for the film -- expired Kodak Gold 100, and $5.15 for the develop and CD. The results are outstanding. Fun how a nearly 40 year old camera with cheap film can still compete with the DSLR for image quality.

Our garden, early evening, on tripod with about a 1/2 second exposure. Nikkor 28mm. 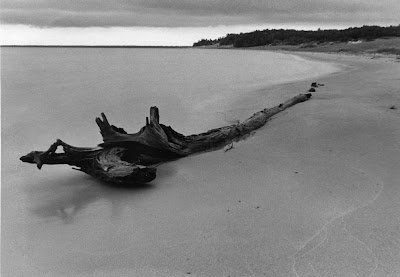 In a few weeks, I'll be heading up towards Petoskey, MI for the Northern Light Photographic Workshops and the photographic gathering organized by Bill Schwab. I had a great time at last year's event, and met lots of excellent and dedicated photographers. In anticipation of that, I have been trying to print a bunch of images, many of which were taken last year. Sometimes I am "in the zone" when printing, and things come out looking great, but the past few outings into the darkroom have not been one of those times. I blame myself for this, as I should be in there more frequently, and I confess that I have been scanning more negs than making darkroom prints. That's come round to bite me in the butt. Images that I scanned in previously have not been as impressive on paper. Anyhow, I'll work through this, and have a bunch of prints to bring up with me on June 24. I better get cracking, though and no excuses. At least hockey season will finally be over Friday night, taking away one more distraction...
Posted by mfophotos at 11:18 PM 1 comment: