canoes and a bunch of photographers 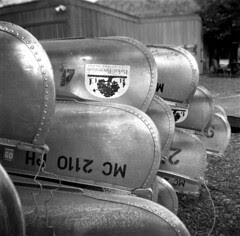 Canoe Livery
Originally uploaded by argusmaniac.
On Tuesday evening, I met with a bunch of other Krappy Kamera Club members at Gallop Park. Marjorie joined me, and since she couldn't find her Holga, she brought the exact opposite -- her Hasselblad. Anyhow, we all met at the Canoe Livery , and fanned out from there, shooting whatever our little Krappy Cameras could handle. I took this shot with two different Krappy Cameras -- my Holga and my Meteor (an interesting 620 camera sold in 1949ish with adjustable apertures and focusing.). This shot was taken by the Meteor, and it was the first roll that I had run through it. I'm quite surprised at the results... they are not crappy. The film is J&C Classic Pan 200, developed in Diafine.

I'm not one to go shooting with a crowd, but in this instance, it forced me to come up with some subjects in a short time. Afterwards, we met at the Corner Brewery in Ypsi, which is quickly becoming a favorite place to meet and have a beer. 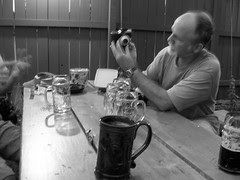 Posted by mfophotos at 12:18 PM No comments:

Presque Isle Park and a Diana 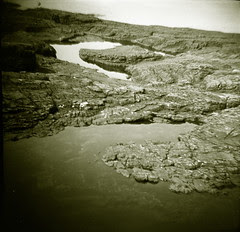 blackrocks 3
Originally uploaded by argusmaniac.
In early July, I visited Presque Isle Park, which is on the outskirts of Marquette, MI. Adrienne, Marjorie, and I were there for the incoming freshman orientation at NMU. I can see Marjorie going there and photographing --- a wonderfully abstract area known as Black Rocks is superb. I shot this image with my Diana, and it's definitely a spot that I would like to shoot with some of my better medium-format cameras. The fissured, lichen-encrusted rocks, small pools, and juxtaposition of sky and lake, make for some excellent photographic possibilities. Lucky kid...
Posted by mfophotos at 9:42 AM 1 comment: 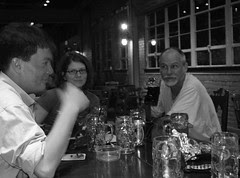 DSC_6708.JPG
Originally uploaded by argusmaniac.
Last night, 8 of us from the Ann Arbor Flickr group met at the Corner Brewery in Ypsilanti. It was great getting together with some people I have met on Flickr, as well as making some new friends. The CB is a fine place for such meetings -- great locally-brewed beers, no smoking, and no loud music! Parking is also free. We talked for over 3 hours, and it was a fun evening. Hopefully, these meetings will get even more popular. The AA Krappy Kamera Club will be meeting Tuesday evening at Gallup Park in Ann Arbor, 7 pm.
Posted by mfophotos at 12:20 PM 1 comment:

Ansel Adams in a New Light 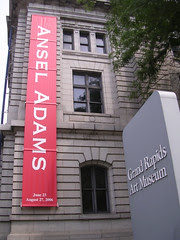 New Exhibit
Originally uploaded by argusmaniac.
I doubt that most people realize that Ansel Adams did a lot of pioneering work with Polaroid films and their cameras, and was a good friend of Edwin Land. Adams felt that the instant process was a great idea, and did a lot of testing for Land. The latest exhibit at the Grand Rapids Art Museum -- "Ansel Adams and Edwin Land: Art, Science and Invention - Photographs from the Polaroid Collection" is a really interesting look into that collaborative venture. Obviously, Land felt that having a highly-regarded photographer of Adams' stature work with the new materials would be a vindication of the new process, and not only did Ansel use the films, he did extensive testing. The letters, test photos and eventual fine-art photographs produced with Polaroid films and cameras, are a remarkable exhibit from the Polaroid Corp.

I have read Adams' book on using Polaroid materials, but did not realize that many of his highly-regarded works of later years were produced with the Positive/Negative B&W Polaroid films. That was a new revelation for me. In addition, there are many works by Adams that Edwin land purchased from him -- BIG prints that probably graced his offices at one time. It's a really fine exhibit that includes color SX-70 images, as well the b&w works. It certainly should not be missed by Polaroid devotees, nor by lovers of AA's work. The exhibit runs from June 23 - August 27 of this year. 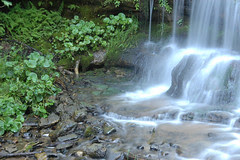 shower
Originally uploaded by argusmaniac.
Yesterday morning, I was in Munising with my family. I left the motel room early, slipping out into the very cool morning air abround 6:45 am. I drove the mile or so up the road to the parking area for Wagner Falls, one of the prettiest waterfalls in the UP (Upper Peninsula of Michigan for you non-Michiganders). I hade been there a couple of times before, and always had to battle through people being there and trying to shoot decent images.

Third time is a charm... there was nobody there -- the air was still, a mist hovered over the falls, and the sun was not shining on my subject. Perfect. I was able to spend over an hout there shooting away until, satiated, I packed up my gear and headed back down the trail. Only then did I meet a couple on their way in. 1.5 hrs alone at a waterfall - ideal conditions -- perfect. nirvana. I had fun. I shot dozens and dozens of digital images and finished off 2 rolls 35mm film.

Is there such a thing as too much? 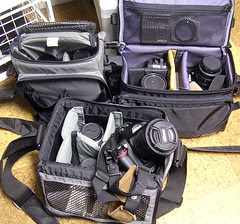 ready3.jpg
Originally uploaded by argusmaniac.
I'm getting ready for a week up north. What cameras do I bring? We are going to be spending some time in one place for a few days ata time, and doing lots of driving around. Marjorie wants to photograph theaters and architecture. I want to photograph rural scenes, nature, macro, and whatever funky stuff we see. We are taking the van. We will have lots of room.

In 2003, we went to New Mexico -- I took my Pentax 6x7, Kiev 60, several manual Nikons, Contax G1, a Holga, Argus C-3, and a little Rollei 35. My most memorable photos were taken at Ranchos de Taos with the Holga and the Argus.

This may seem like overkill, but I really like b&w shot on real film. I hate desaturating a color image to make it b&w. So, the N8008 will shoot b&w film. The Diana might get some Provia slide film if I see some colorful stuff.

Oh I forgot the Polaroid.... that's coming along too. There's nothing like it.

I'm sure someone out there is thinking I have way too much stuff. Maybe I do. But you know what? If I left the 70-180 micro-nikkor at home, I'd be kicking myself when I wanted to shoot some butterflies or dragonflies. Like anything -- the right tools make the job easier.
Posted by mfophotos at 7:31 PM 1 comment: