It's been a busy few weeks, ya know.

Since the last time I blogged on 10/12, I have been busy with a number of things. First, and foremost, was the big annual photographica sale put on by the Michigan Photographic Historical Society that took place in Novi on 10/14. I had great help from my friends Ross and Amy, as we had a van full (and then some) of stuff to sell on behalf of MiPHS. We did really well, selling about $1900 worth of cameras, accessories and books, and most importantly, ridding me of about 80% of what was being stored in my garage. 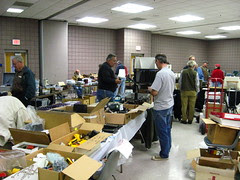 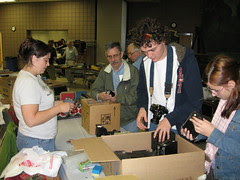 The day before that, Dennis accompanied me to Historic Fort Wayne, just S of Detroit, where we met up with Ralph and wandered around taking shots (mostly with toy cameras) of some interesting dilapidation at the fort. Things are improving there, but nonetheless, the crumbling buildings are interesting material. 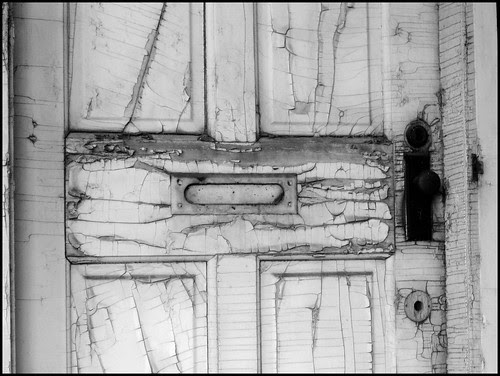 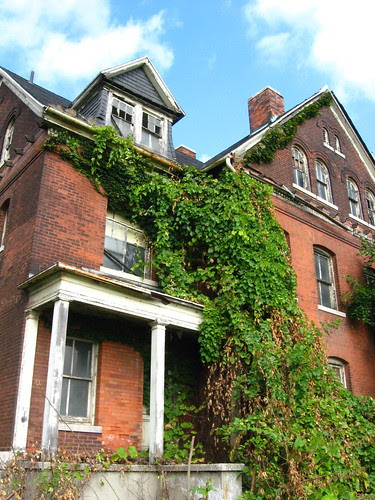 Finally, this past weekend, Adrienne and I drove to Marquette to see our daughter, Marjorie, and partake in a Parents' Weekend at NMU. I'll blog that separately.
Posted by mfophotos at 12:55 PM No comments:

Walking home from work yesterday, I saw that a lot of the leaves had big drops of water from the rain earlier in the day. It was gray, windy, and cold, but such little pieces of beauty warmed me up inside. Find some beauty on your gray day.
Posted by mfophotos at 10:28 AM 1 comment:

This coming Sunday, October 14, I'll be in Novi Michigan, where I'll be doing my part as a member of the Michigan Photographic Historical Society. It is our annual Photographica Show, and runs from 10-4 at the Novi Community center. My annual job is running the tables that the MiPHS is selling stuff from. We are still selling off the remainder of the Naslanic estate, as well as some others, so this year will be a bonanza for someone, or many someones.

As I have had the bulk of the stuff in my garage, I have been able to sort through it and price the nicer items that we will be selling. Ross Orr came over last Sunday and helped out with that, so the SLRs and 35mm rangefinder cameras are set. Speaking of rangefinders, it was fun to look at them again, and see how nice some of them really are. Here are a few examples: 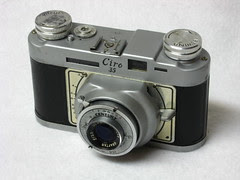 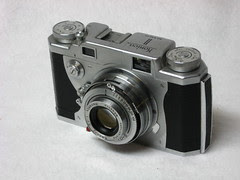 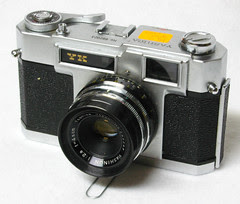 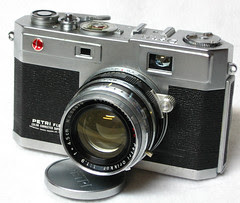 Petri 1.9 Color Super -- An all-manual rangefinder camera from 1960. This one, unlike many Petri cameras, seems to work just fine. And, it is a pretty one!

And the nicest one of the bunch, as far as I see: 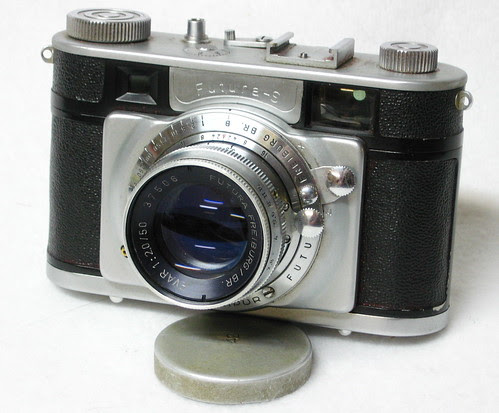 Futura S -- An incredibly cool rangefinder camera from Futura Kamerawerk, Freiberg, Germany. 1952-55. Synchro-Compur shutter, B-1/500, coupled RF, f/2.0, 50mm lens. This one is a beauty and I knew I better photograph it, as I am sure I'll never see another!

It's plain to see, just from these few examples, how much better the Japanese and German-produced rangefinders were compared to American-made counterparts from the same era. Why buy an Argus C-3 when you can have a camera with more features, better appearance, ergonomics and lenses? And for not much difference in price? Even my lovely Argus C-4 pales in comparison to the Konica II. That Futura-S is just beautiful.
Posted by mfophotos at 10:37 PM 1 comment:

For some time, I have been looking to replace my aged Nikon Coolpix 3100 with another pocket digicam. My requirements were:
an optical viewfinder
decent array of controls
reliable
moderate zoom range
runs on AA batteries
good-sized LCD display
compact
less than $200

Nikon eliminated the optical VF from their coolpix line, so they were out. After looking at other cameras and reading many reviews, I came to the conclusion that the Canon Powershot A-series cameras were my best bet. Although I am a die-hard Nikon person when it comes to film and digital SLR cameras, I wanted something that fit my needs, not a label, and the Canon Powershot A570-IS really attracted me. It may have been Herb Keppler's article in a recent issue of Popular Photography where he featured the Powershot A460 that made me take notice. The A460 is a cute thing, and very inespensive, but lacks the manual control that I wanted. The A560 didn't quite have all the features, but the A570 did. For $50 more, I got a cameras that really has a lot of creative potential, and fits in my shirt pocket. As you can see, the Coolpix 3100 was getting worn and scratched, and the 3.1 MP count was limiting. With 7.1 MP, movie mode, Image Stabilization, et., etc., the Canon is a huge upgrade.
I don't have any photos from it to post yet, but give me a day or so!