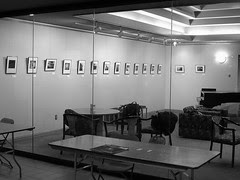 View from the outside
Originally uploaded by mfophotos.

This afternoon, I set up my photography exhibit at Pierpont Commons in the Piano Lounge Gallery. I was originally going to put up 20 to 24 photos, but the space wasn't really enough. At first I was disappointed that they had been short on the hangers, but after I set things up, it worked out just fine with 18 framed images. John Baird came out at 4 to help out, and his attention to detail was very helpful. We figured out the spacing, etc., and at 24 inches apart on center, there was room enough for 18. I had the hard part of deciding which images to hang, but I think that was actually a good thing. It made me decide which images were strongest, and not that the "rejects" were bad, but I think the culling made for a stronger presentation. However, I am sure if I polled 10 people about which ones to include, I would have had 10 different answers.

A little later, my neighbor Andrew showed up, and he and John finished the little tasks of rolling up the wires, and Adrienne helped me with the legend cards. In all, it was pretty easy and a lot of fun, once I figured out which photos to hang. Before we left, several students were looking at the photos. I hope I inspire a few to use a toy camera.
Tomorrow is the reception, and I think I will have a great time!

As this is my first show, I had a lot of angst over the images -- which ones to print, the type of paper, etc. I worried about how people would react -- they are toy camera images, not photographs made with the type of control that I would normally use. They aren't snapshots, either, but things I see that affect me in ways only I know. So, it's been an emotional rollercoaster getting ready for it, and I think it's okay now for me to say, "no hands!"

Ha- I just realized that I should put in the info about the show itself!

And some self-promotion. You really need one...
http://www.cafepress.com/mfophoto.85909466
Posted by mfophotos at 9:42 PM No comments: 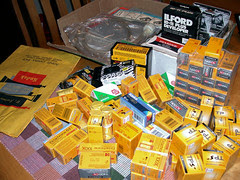 A few days ago, my friend Cynthia sent me this e-mail: Seems George Coleman, used photographic equipment dealer, is going out of business due to ill health. His sale is this (Jan 25) Thursday through Sunday, 9-5, except Sunday at 11-4. The location is 23404 Sherwood, at Lozier, in Warren. I was just in there around Sept? October? There was a LOT of stuff. It was nicely organized. Lots of enlargers, large negative carrier ones too. Don't know if there are any images. Probably some store fixtures."

Well, I wasn't about to jump in the car and go during the week, but I figured that Saturday, there might still be some goodies remaining. I contacted some local photography friends, and we all took off in my van Saturday afternoon. We arrived at a somewhat decepit-looking cinderblock building in a light industrial/residential area that looked like it had seen better days. We knew it was the place when we saw the film dispensing units arrayed outside the door. We walked in and it was a mess... stuff was everywhere. Now, of course, the sale had been going on since Thursday, so the very best had been taken already... but still the amount of photographic stuff - from camera cases to chemicals to expensive machine lab equipment was everywhere. Room after room. It seemed like a demented version of colossal cave adventure -- go L, there is a darkroom... go R, there is a door...open the door... you see boxes of stuff... you get the idea. I really wish I had taken a digicam along to show what we saw. Unfortunately, most of the paper we saw that was remaining was for color processing - commercial stuff. I am reluctant to buy any opened boxes of photographic paper. But, I did find a bunch of film, and put most of it into a bag. I found some photographic books (they had lots) that I liked, and some developer, and that was about all I could really buy as I had (stupidly) not gotten a bunch of cash beforehand. Thankfully, Ross loaned me $7, so I could get all that for $20. Matt picked up 20x24 packages of Kodak elite paper - wonderful stuff - for $5.
Anyhow, it was a surreal experience, picking through the place -- it seemed at times that things were left as they were at quitting time one day, and nobody ever cam back to work there.

Posted by mfophotos at 9:03 AM No comments:

I suppose I could also have titled this post something like "Develop Your Film Right Away", or "What's In the Cannister?" The other night I decided to catch up on developing some random rolls of 35mm sitting in my darkroom. There were two rolls of Ilford HP-5 that I ran through D-76. One roll was from a few weeks ago, and I knew what I would find on that one. The other, I could not remember what camera it came from before I put it in the developer. Afterwards, as I removed it from the developing reel, I saw a bunch of images that I could not place at first. Then, I realized I had shot the roll of film in one of my cheap plastic 35mm Vivitar cameras, and most were from a trip to the Thumb region Marjorie and I had taken back in late April. A few of them are surprisingly good. So, as the title says, it was a pleasant surprise. In a way, it was like taking that trip all over again, since I had to look on our marked up roadmap to find where I had taken the shot of this abandoned schoolhouse in Lapeer County. 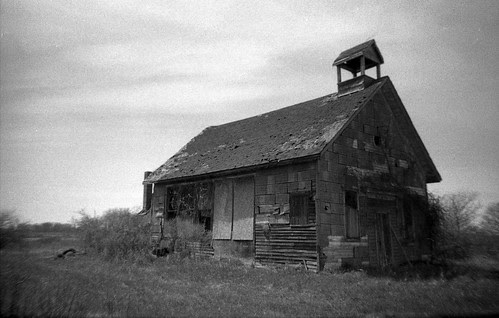 Posted by mfophotos at 11:27 AM No comments: 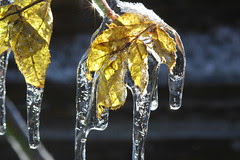 A couple of days ago it began with some mild freezing rain, and by Monday morning, we had up to half an inch of ice on anything that was jutting away from the warmer ground. I took some shots in my yard on Sunday, when it had really just started. 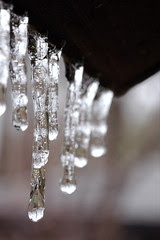 But on Monday, the ice was just amazing, with the trees, grasses, shrubs, etc. coated with ice. I took a few shots on the way in to work and on the way home. For someone that has spent most of his 50 years in a northern climate, you'd think I had never seen this before. Well, since we have had such an un-wintery winter up to this point, perhaps it's partly because of the change in the weather. However, usueally when we have an ice storm, it melts off in a day or so. Not this time, as the weather has turned colder (last night it was 12°F), keeping the ice on everything. This means we'll see a plethora of images from the past few days. This is good stuff. It makes people look at nature a little differently, and makes photography so much fun, even when my hands get cold through the gloves. Those people that have to move to Florida can stay there. I like variety. 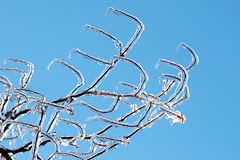 Good day for the darkroom 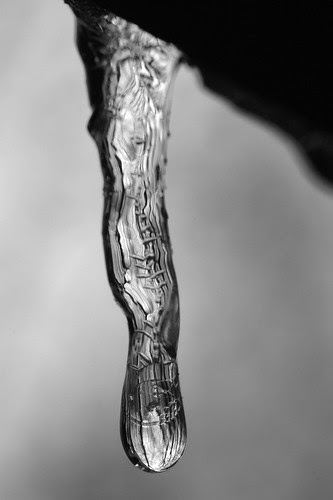 We are having a bit of freezing rain today -- and I spent about a half hour in the backyard photographing frozen drops. The Nikon 70-180 micro-Nikkor is perfect for closeups such as the one above. A hefty lens, but on the D70, it's field of view is equivalent to a 105-270mm.

After uploading a few shots to Flickr, it's time to get back into the warm darkroom and make some b&w prints... There are a few that I need to try with better contrast before I'll be happy with them.
Posted by mfophotos at 12:45 PM No comments:

The stories about traditional camera stores closing up always make me sad. This one is particularly sad, because it's obvious that the store had been there a long time. A brick and mortar camera store has a hard time surving today between the competition from the big-box stores, office supply stores, and of course, the Internet. Digital has become so pervasive in the marketplace, that consumers shop at a computer or office supply store to buy cameras. This has had a devastating effect on the "traditional" camera stores. Ann Arbor has lost several photo stores over the years - Quarry Photo, Purchase Camera (1980s), Dave's Photo Emporium (2005), and more recently the local Adray Camera store (2006). 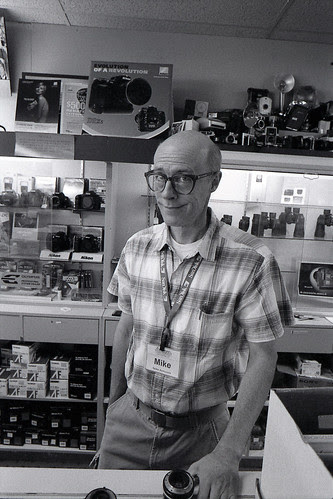 
Locally, we have Big George's Home Appliance Mart and in Dexter, there is Huron Camera. The only places to go nearby if you need photochemicals, non-consumer film, a film camera, and supplies. Oh yes, and you can talk to people that know something about cameras and photography, and businesses that also support local photography groups as well as provide student discounts. Support Your Local Camera Store!

I stumbled across this today -- and it's purported to be for internal use only, but Kodak should run this during the Super Bowl -- it's that good.