Last weekend, Adrienne and I made a trip back to Amenia, NY to visit her family, and to photograph the family cottage on Twin Lakes, CT which was about to be sold.  I brought my Nikon D90, Nikon F3HP, Hasselblad 500C, Nikon 1J1, and my Polaroid 250.  While I spent a lot of time documenting the cottage with my D90, I used the Polaroid quite a bit with the people.  Now, in case you have forgotten, the Polaroid 250 Land Camera is a bellows camera with a nice rangefinder focus, and takes the traditional Polaroid pack film for 3 1/4" x 4 1/4" prints.  Wait! Didn't Polaroid stop selling film? Yes.  But Fuji makes color and black and white pack film for these cameras.  It's Fuji FP100C and FP3000B films that work with the old Polaroid pack film cameras. 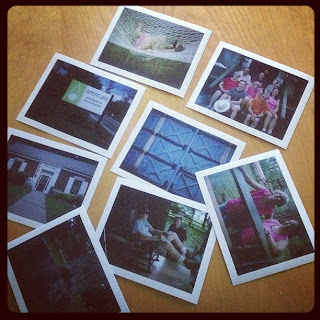 As soon as I pulled out the 250, I got all kinds of comments, from "Is that an old Polaroid?"; "That camera must be really old!"; "I used to have one of those."; to "Can you still get film?"  Even better though, was the immediacy of the results and people's appreciation on seeing something they could physically handle.  To me, that is one of the great things about Polaroid images.  They are nearly immediate, and TANGIBLE.  Not some file sitting on a smart phone that's hard to show off, not a file on a hard drive, but a thing - an object - which obviously has substance and value, and can sit on the shelf or on the fridge, or in an album, as a reminder of an event, a person's love, or a place.  There is only that ONE image, and you have it.  (Well, of course, they can now be scanned in, etc., but not if I gave one away.)  I shot 3 packs of the color film, and gave some of the prints to people, and kept the rest to share electronically.   The people that received prints were so appreciative.  That's one of the underestimated things about photography.  The power to capture a moment is one thing, but to hold that moment in your hand as a 2D representation, unchanging, independent of any other device, is one of the reasons photography became so popular. Especially since a drawing takes way too long.
It used to be that people shot Polaroids all the time, and they were a regular part of parties, gatherings, etc.  Today, everyone uses their cell phones.  Oh, you can go to the Internet to see the photos, etc., but having a print of your very own is a more precious thing.
I like the palette of the Fuji color pack film.  It's colorful, and self-limiting -- you don't have to worry about leaving the positive/negative together for too long.  I hope Fuji keeps producing it for quite a while, as this 250 still has a lot of life left in it.

A few examples from the weekend: 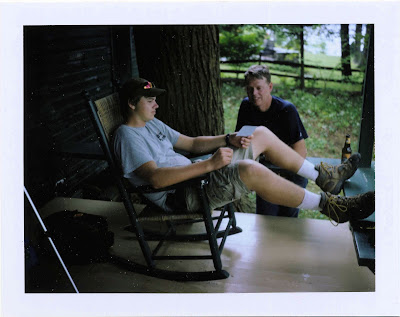 Nick and his dad, Bill, looking over at a Polaroid I had taken of the two of them just minutes before.  Bill carefully took it back to his truck so as not to lose it . 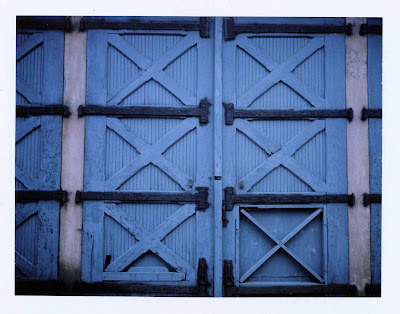 Blue doors at an old building in Millerton, NY. 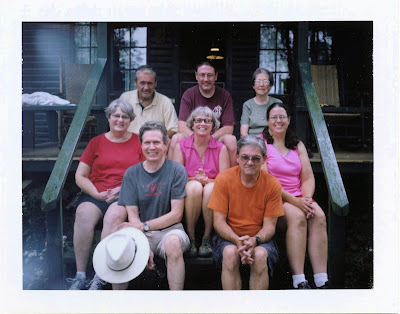 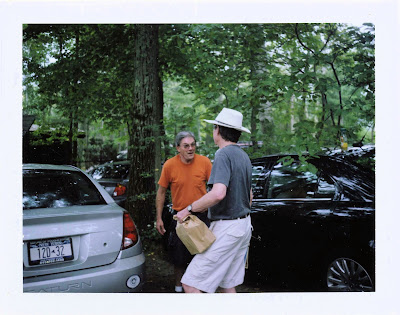 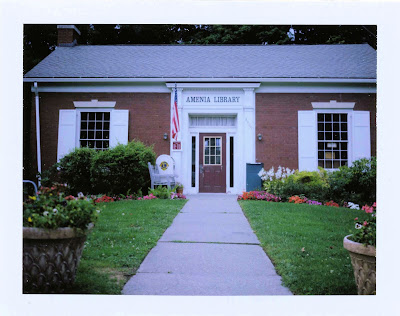 The Amenia Library.  Amenia is in Dutchess County, NY - a largely rural and hilly part of the state.  It took a while to get used to driving there, compared to the flatness of Michigan. 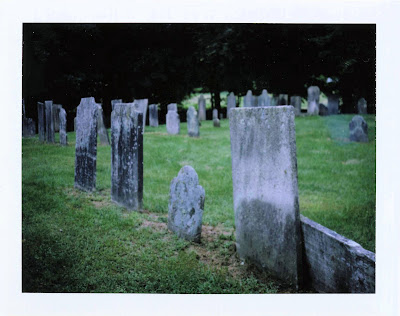 Amenia Burial Ground - a cemetery that is populated by graves from the late 1700s to mid 1800s. 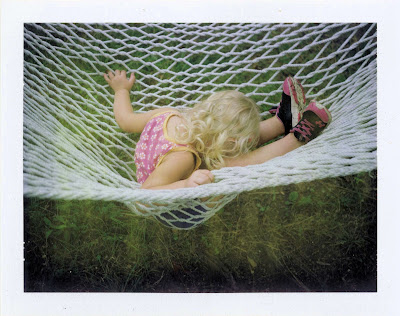 Anastasia, caught in the gravity well of a hammock. Her mom really appreciated a Polaroid.


Posted by mfophotos at 1:01 PM No comments: