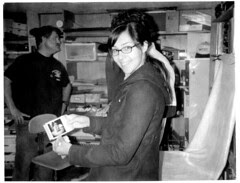 e50e
Originally uploaded by argusmaniac.
Tuesday evening I hosted the monthly meeting of the Ann Arbor Krappy Kamera Club. It was our best urnout so far, with over a dozen participants, including some new faces, and people from much farther away than Ann Arbor/Ypsilanti. Kalamazoo, Lansing, and Dexter were also represented. We started the evening presenting the results from our assignment, which was to do a photograph, or series of photographs, representing something about the future. A couple of people really got into presenting some future scenarios, such as Mike's "Skin Farming" series. His narrative was hilarious, and the images very imaginative.

I followed with a demo on mounting and matting using both archival methods, and the dry-mount press. We had planned on watching the movie "Pecker", but it was getting late. It certainly was a fun evening, meeting some new people, as well as meeting some people for the first time that I have "known" on Flickr for quite a while.

Erin (e50e on Flickr) was having a great time shooting some of my old cameras with her Holgaroid -- which was also a very interesting camera on its own! Presented below is one of her very cool images from Flickr of my Crest 120 camera: 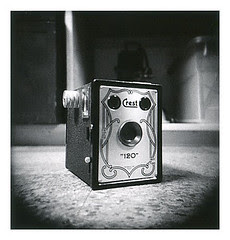 It will be interesting to see how this group goes- having been involved with it from the start -- I'm optimistc that we will have a going concern of people that enjoy using and producing some real fine photographs with these crappy cameras.
Posted by mfophotos at 12:34 PM 1 comment: 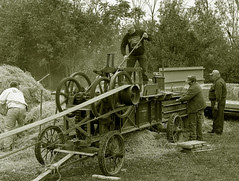 By the way, I was there for a little over an hour, and shot about 200 digital color images, and 45 black and white film images with my Mamyia 645E. I love those larger negatives, as the photo here illustrates very well.
Posted by mfophotos at 10:17 PM No comments: 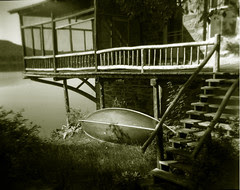 Stone House
Originally uploaded by argusmaniac.
I've been in sort of a reflective mood all week, and in looking for a negative for a photo that is to appear in Lightleaks magazine, I came across of series of negatives that i shot with a Holga in 2002. Funny how things turn up. I scanned several of the negatives, as I don't recall ever making prints from them -- I'm really pleased with the images. I have taken a lot of color slides of Ives Lake and Stone House in the Huron Mountain Club while I was doing research there a week or so almost every summer, from 1984 - 2003. I don't think any of them have the emotional appeal that the shots from the Holga do.

Of all of the places I have been in Michigan, the time I spent as a researcher at Ives Lake remain some of my best memories. The quiet lake with it silence punctuated by the loon calls, is a place that I have been priviledged to stay at. I may never have a chance to go back, and there are some shots that I know would be an improvement over the ones I took back in the 1980s and early 90s. The Stone House is an amazing structure, built by Longyear around 1910 or so.

Posted by mfophotos at 8:33 PM No comments: