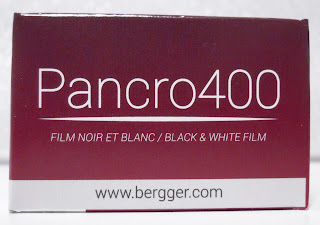 A few months back, I finally ordered a brick of the Bergger Pancro400, a new French B&W film. Bergger is well-known for its printing papers, but the film is a 2016 introduction. The film is a two (panchromatic) emulsion film, with the emulsion being composed of silver bromide and silver iodide, and is supposed to result in a wider exposure latitude.


First of all, it is well-packaged, with development information on the inside of the box. To me, that is a great touch and a detail that is very useful with a new film. Of course, the Bergger website has more information, but you don't have to go there, because the info is inside the box. I loaded the film into my Nikon N8008s, and shot it in upstate New York back in July. After I returned, I loaded it into one of my Jobo tanks and set it aside in my darkroom until I could have time to do the developing. Well, no matter how long one has been doing something, there is always a way to screw it up. The roll was a mess, as I had not tightened down the lid on the developing tank, and while the film sat out for a few days, enough dark leaked out that I had obvious light leaks on the film. While many of the shots were ruined, a few looked pretty good.
For the developing, pre-soak the film for 2 minutes. Dump the water and then develop in straight D-76 for 9 minutes. Of course, the usual water rinse for stop bath, and fix for 7 minutes. I chose the D-76 because it's a standard developer that many people use and one that I use a lot. My first roll was developed in HC-110B, per instructions, and I felt that the D-76 developed negs looked better to my eye.
Once dry, the film has a slight cupping to it in the scanner film holder, but lies mostly flat when everything is tightened down. It’s nowhere near as bad as Kodak Tri-X, but not as flat as Ilford HP-5+.

Since then I have shot several more rolls. All are at the box speed (ISO 400), and I did not do any bracketing. I like my results thus far. It's not every day that we get a new b&w emulsion on the market, and I think the Pancro400 fills a niche that will be appreciated by street photographers. Others have pushed the film to ISO 800 and 1600 with excellent results.

Herewith are some examples.