Last Wednesday evening, I gave a presentation to the Saline Photo Club titled "Great Photos from Crummy Cameras." I had a bunch of "crappy" cameras with me as well as a nice presentation in Powerpoint format (although done entirely in Open Office and used with a Dell mini-9 under Linux). The evening went very well, and I had a lot of good exchanges with the audience. I delved into the art history aspect of the Diana, some of the common threads in what I call "Neopictorialism" and an overview of many different toy cameras and images resulting from them. I think the main aspects to embrace about toy camera photography are:

I'm sure you might have additional bullets to put on that list, but I think those are the major points. When I say non-threatening, I mean that nobody will take you seriously holding a Holga 135BC or a Diana, or a dollar store camera in your hand. What a great way to photograph the street. Walk out there with a DSLR and a zoom lens and see how people may react differently.

Low-cost. I think about the die-hard digital crowd that says "I can do that in Photoshop." Go ahead and make my day, punks. Let's see, you spent $1000 on your camera and lens and goodies, another $1000+ on your computer, $600 for Adobe software, and you haven't even taken a photo yet. Maybe you spent less, maybe more. The point is, I (and many others) paid less for the crappy camera and film than you did for a 72mm circular polarizing filter. Plus, I had the shot as I exposed it, not doing some post-PS work to make it look different. It was that way already. Not just different, but unique, and the effect of the lens aberrations and quirks is maximized when used with film.

Be creative. In fact, no two of my crappy cameras have the same effect. All are different. Knowing how to use those primitive boxes with limited exposure options are what makes them a tool worth having. They may not work for everything, but when the situation arises, they are wonderful cameras for conveying a slightly surreal, dreamy, or totally altered view of what's in front of the lens. 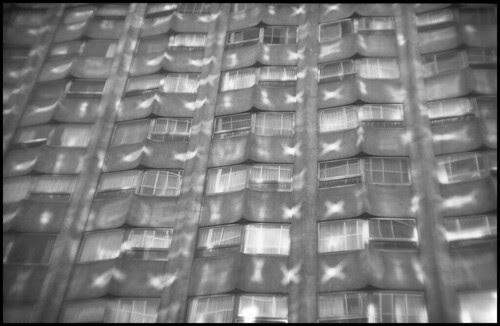 From my work with many toy cameras, I think one that deserves another mention is the Holga 135BC. If you don't process your own b&w film, load it with Ilford XP-2 or Kodak's CN-41. Processing of 35mm is readily available, it's small, you can adapt it for series filters, and it has a Bulb setting, too. 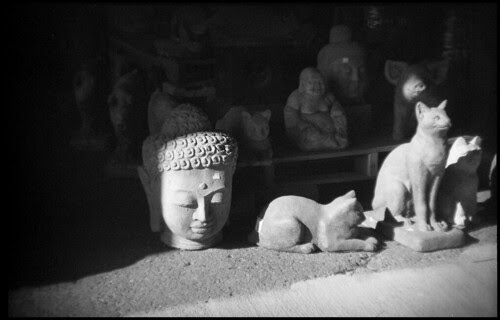 I have been doing more photography of ice for a long-term project. Ice can take so many forms and abstract patterns, that the photos are a lot of fun to do with no two days ever being the same. Photos I took last year under certain conditions are not likely to be repeated. Moreover, I have to do them when it's cold out, which is always another set of challenges. Anyhow, the Huron River and Fleming Creek have been one of my oft-visited places for this project. I was out today and stopped at the Delhi Rapids by Delhi Road between Dexter and Ann Arbor off of Huron River Drive. There were many great shapes and abstract forms. I shot with my Fuji Finepix S2Pro in b&w mode, and a Nikkor 80-210 AF-D lens. 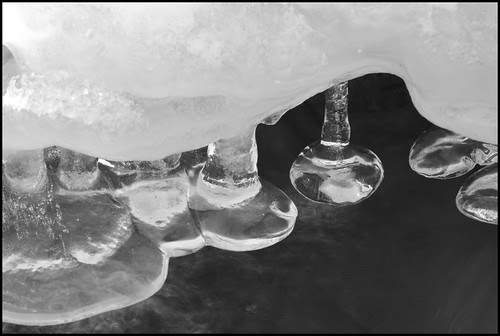 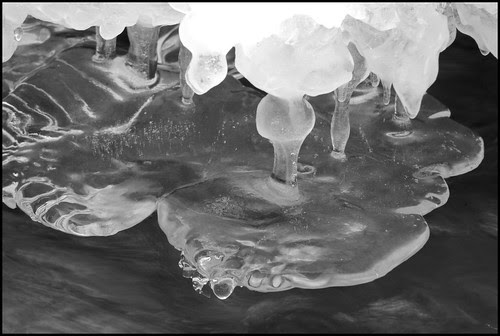