When Kodak introduced Ektar 100 a few years ago, I was very enthused about it. That film has an Ektachrome-like palette that scans well and is fun to shoot with. Kodak has now introduced a new film, Portra 160 that replaces the 160VC and 160NC. It's obvious that Kodak is simplifying its line of films, and given the market niche, it probably makes sense. This is not 1990, when the Kodak film offerings were amazingly varied. So for now, for their professional color c-41 films are:
Portra 160
Portra 400
Portra 800
Ektar 100

I believe all have been designed for ease of scanning, since a hybrid workflow appears to be the norm these days. 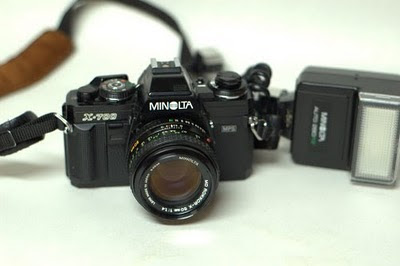 I recently received an e-mail from a neighbor, asking if I might be interested in a camera that he no longer needed. It was a Minolta X-700 that had been given to him about 15 years before by my now-deceased mentor, Bill -- who was also the previous owner of my house. I went over and chatted with my neighbors for a while, and we talked about photography, and also about Bill's generosity of time and equipment. The X-700 looks like new, and in fact, it had been serviced by Dave's Camera Repair in 1999, so there is no bad capacitor and the camera works like a new one. I was very happy to give the camera a new home, but in fact, it was it's old home! I often wonder how many cameras Bill bought at Ann Arbor camera stores -- especially the old Big George's.


This is my second X-700 that came from Bill. He gave me an X-700 with just about every macro attachment in 2001, and I used that gear frequently, and added more lenses, as well as a nice XE-7. The X-700 went to NYC with me in 2004, and was a great camera on that trip. I ended up selling off all my Minolta gear about a year ago, as I wasn't using it all that often. Hey, I already have as much Nikon gear as I need, as well as some Olympus, Pentax, and Canon outfits. But seeing that pretty X-700 made me realize that I was fond of that camera. This one's staying home...

Minolta made some great cameras. From those all-metal workhorse SRT-series bodies, to the very well-made XE-7 (which has the guts of a Leica R3 SLR), to the last of the manual bodies, the X-700. The only knock on the X-700 bodies was the problematic capacitor issue which renders the camera useless if it goes bad. The lenses are excellent, and it is a full-featured system that will provide just about anything you would ask from a manual 35mm SLR. When Minolta came out with the Maxxum AF system and introduced a new lens-mount, there was no backwards compatibility (as with the Canon EOS and manual FD-mount cameras). Consequently, you can now buy used manual Minolta bodies and lenses at very good prices. 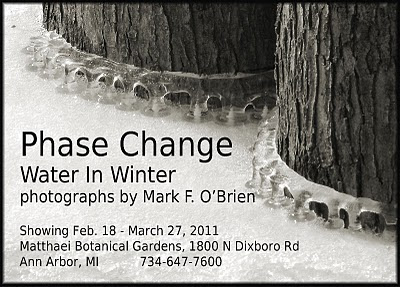 A few posts ago, I described getting materials ready for matting and framing for an exhibit. Now, I can tell you a bit more about it. The exhibit, "Phase Change - Water In Winter" will be at Matthaei Botanical Gardens from February 18 to March 27. MBG is located at 1800 North Dixboro Rd., Ann Arbor.

Getting the images together - some of which started as digital, some as film, is perhaps the most challenging part. In fact, although making the images required some planning, some of my most memorable shots were due to pure luck. Some of my best shots were taken on a whim in March 2009 when I stopped at Dexter-Huron Metropark and saw some wonderful ice shapes and patterns that I have not seen since. Nature is like that, and it shows that one really has to be ready to shoot when an opportunity presents itself. On top of it ll, winter weather is often unpredictable. Waiting a few more days to go shooting might put me right in the middle of a thaw. So, shoot while the ice is cold, I say.

Winter photography is hard work, though. I like shooting on gray days when the contrast isn't so great, and I don't have to worry about glare and specular highlghts.

Most of my shots are taken on TechPan film when I am using film. The tonality and slowness of the film allows me to take longer exposures over water without the use of filters. In some case, the juxtaposition of the hard ice surface and the flowing water provided me with an opportunity to make some surreal images.

I am slowly building up a large number of images of water in winter that may end up as a book at some time. For now, this first show is just a sample of what I have been doing just in and around Ann Arbor, proving once again, that you can do some good work right where you live, in the place that you know the best.

What I found in making these photos, was that the conditions forced me to slow down and think about what I was seeing. There are abstractions, patterns, and miniature landscapes in these water shots. Often, instead of using the wide view, I used a zoom telephoto to capture a small part of scene, that isolated, gives a different impression than a full-scene view might have. In some images, the scale is evident, in others it is not.