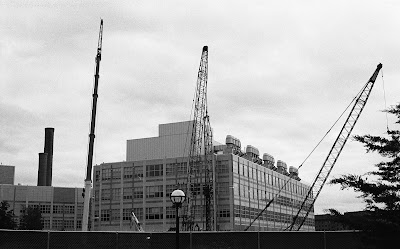 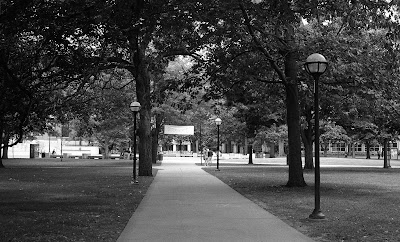 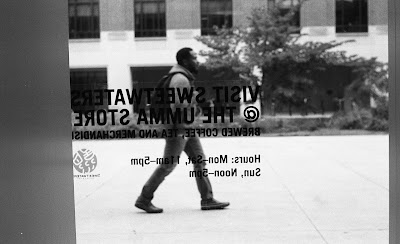 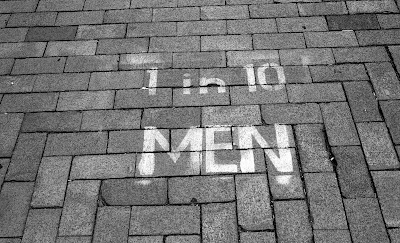 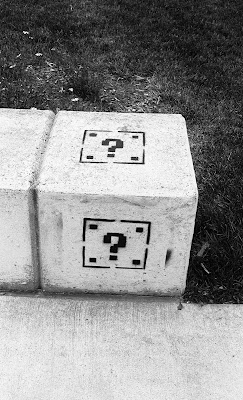 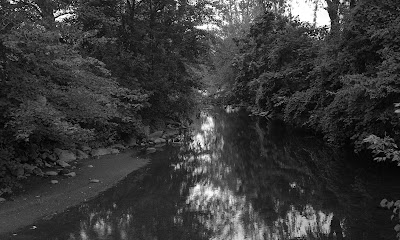 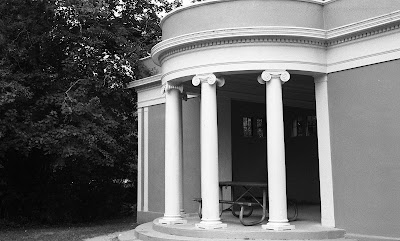 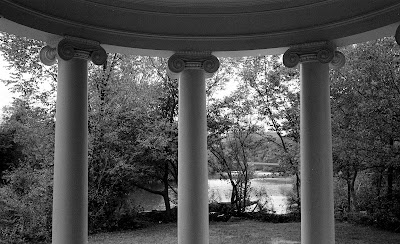 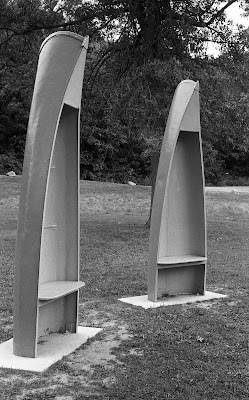 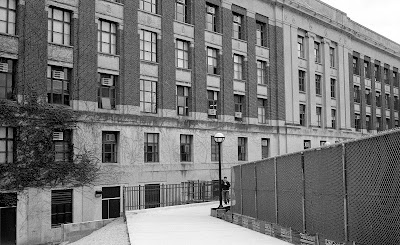 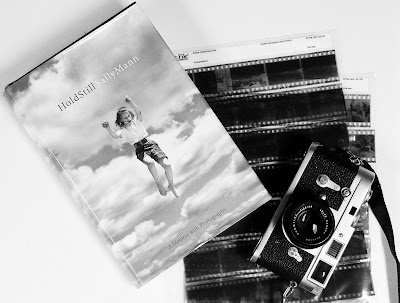 Hold Still, A Memoir with Photographs by Sally Mann has to be one of the most engrossing books by a photographer that I have read. Published this year (2015), it is an intimate autobiography by one of America's celebrated photographers.  Sally Mann not only delves into her own history, but to the history of both parents' families, her life as a child, adolescent, angsty and rebellious teenager, adult, mother, and photographer, and the events that shaped her. She forged a path of her own, and credits photography and the love of her life as two things that saved her from becoming a talented, possibly aimless woman trying to find herself.  Reading this book, I felt as though I were in an extended conversation with her, as events and people and photography are weaved into a compelling and intimate narrative that is so much better than having someone write a biography about a person after his/her death. There is an all-encompassing thread of death in the book, but it's not a put-off.  In the grand circle of things, death is part of life, and our culture in America has put death out there as some sort of aberration, when in fact, it is not.  I think Sally manages to imbue death with a life of its own in this book, and while yes, there is finality in it, life still goes on.  That is just one aspect of this rewarding book.

As a photographer, I want to know what motivates people to shoot, and what influenced them in their careers.  A third aspect comes to the fore here as well, and that is her love of the Virginia countryside, especially the mountains, where she grew up. It's the land and the light that moves her. and I get exactly what she's saying.  Yes, she does describe some of her work as a photographer, as well as the fallout about her photography that used her children as subjects.  It's very interesting, and thought-provoking.

The fourth aspect of the book that stands out, is the dichotomy and interlacing of black and white cultures in the South. Sally contrasts the beauty of the South, and the ugly truth of apartheid that has permeated the history there.  Sally writes, after finding a nondescript burial in the fields of Mississippi: "Out in the middle of nowhere, I contemplated this paradoxical scene so emblematic of the plucky, undiminished South, a no-frills monument to the intractability of the overworked soil and the practical, impoverished, generous people who have long tried to wring a living from it."

This is a complex book, focusing on her family history, her personal history, finding photography, living as an artist, finding love, finding beauty, and some timeless truths about love, art, redemption, and the continuum of life.  If Sally Mann had never taken a photograph, we would have been poorer for it, but she's equally skilled as a storyteller, and Hold Still will have a hold on you.

I should add, after all this, that Sally Mann came to Ann Arbor in 2012 and spoke as part of the Penny W. Stamps School of Art and Design's lecture series.   She was fantastic, and some of the content in Hold Still was part of her lecture. 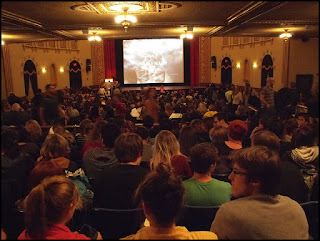 This year, Argus Day was August 15.  It amazes me that I have shot on nearly all of the Argus Days since 2002.  Started in 2001, by a small group of Argus-lovers, Argus Day has endured and remains "an event."  Usually, I use my most trust-worthy Argus - an Argus C-3 or a C-4 that I have shot with previously, and have gotten good results with.  I mean, why would I want to risk lousy results on this one day?  However, this year I tried something different.  My daughter's Argus collection still remains in the house, so I borrowed what appeared to be a working Argus Markfinder, also known as the Argus 21.  The shutter speeds seemed to work, and I figured I could live with the guestimated focusing, as the Markfinder (so named for the cross-hairs in the middle of the viewfinder) does not have a rangefinder like it's offspring, the C-4. One other difference from the C-4 is that the lens on the Markinder is removable to use as an enlarger lens.  Those post-war Argus people though of everything, didn't they?  The cameras have the same shutter mechanism (or at least sound like it!), and overall control placement.  However, I have rarely seen a Markfinder in working condition, so the one pictured here got used for Argus Day.  So did an Argus A I have held onto for some time.  It's an plain-vanilla A, an early version with a single sprocket inside.  The glass was clear, and the shutter speeds and aperture work.  There is no focusing with this model.

I met up with Patti Smith and Christy Hoffman at Camera Mall, and Desmond took our photo. Then, Patti was off to shoot at an old-time baseball game.  George Lavoie showed up right after, and he and I walked around Ann Arbor's downtown and did some shooting.  It was a sunny day, so Sunny-16 was easy.  Both cameras were loaded with Arista 100 Ultra, which is Fortepan 100.  One thing I like about the film is the way it lies flat in the scanner's film holders.   Rodinal 1:25 for 6 minutes is a good developer for this film.

One of the things I have not liked about the C-4 and now the Markfinder, is that the film winding is likely to pull the film off the spool if it is a reloaded cassette.  There is little feedback from the tension in the film, as one might find with any SLR.  So, I ended up shooting for a fair bit after the roll was fully wound onto the take-up spool. Once I realized this, I waited to open the camera until I got to the darkroom.  The Argus A seemed a bit sloppy in film winding, and whether is is due to the single sprocket or the age of the camera, I could not tell.  Using the camera is pretty simple.  I was amused with George using a nice-looking Argus Matchmatic.  It took him some time to get used to the quirky EV settings on the camera, as well as the very clunky (typical Brick) controls.  These old cameras do force you to think about what you are doing, if you are used to the digital world, and modern controls -- while technologically complex, are easy to use.

So, what about the results from the day?  After I developed the film (both rolls in one Jobo tank), it was obvious that the Markfinder had seriously overexposed the film.  All the negatives were dense, so the shutter speed when set at 100, was more like 1/25.  It was especially obvious when a a blurred motorcyclist appeared in one frame, which would have been fine at 1/100 sec.  The negatives from the Argus A were pretty good, but there were spots where the sprockets had been torn.  I know I was advancing the film properly, so I am puzzled about that.   Anyway, with scanning, I was able to adjust the results from the Markfinder  to a certain degree, but there is only so much one can do.

There is some vignetting in the Argus A, which is not necessarily a bad thing.  I think Lomography should embrace the Argus A, so that they become more valuable. It certainly fits in with the Lomo aesthetic.  One last Argus A comment -- when I opened the back to remove the film, the pressure plate fell off.  That 75-year old glue just doesn't hold the way it used to. 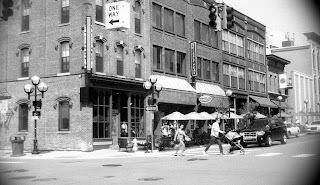 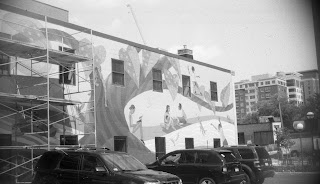 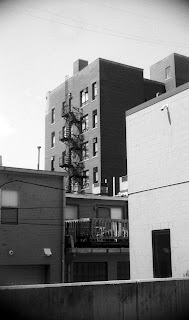 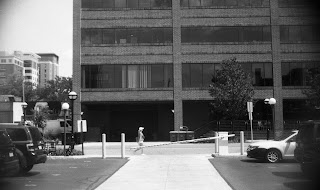 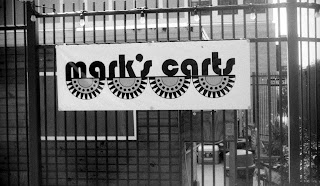 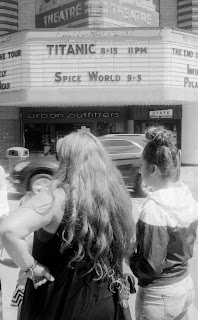 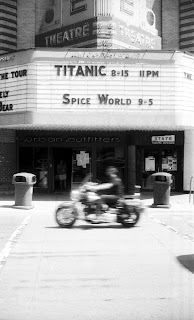 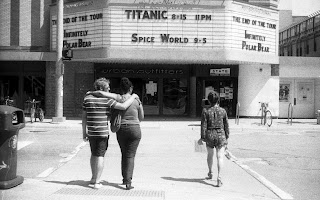 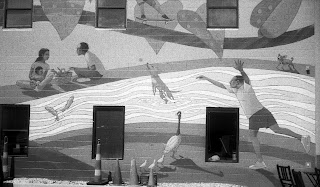 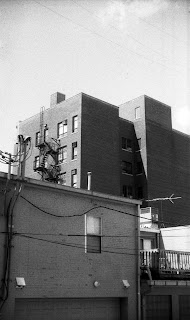 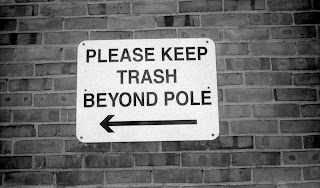 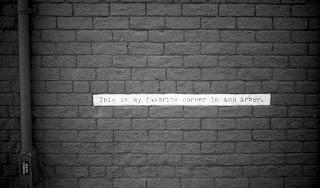 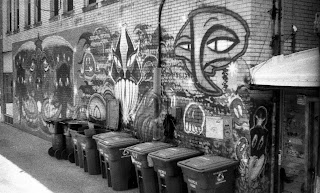