Out and About with the Argus CR-1 SLR 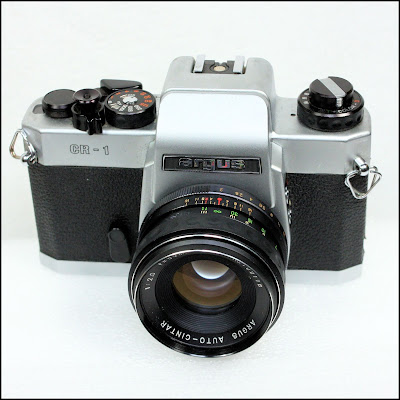 Welcome to a review of yet another Chinon M42-mount SLR, albeit badged as the Argus CR-1.  Chinon produced the CR-1 in 1975, and in fact, produced a series under the CR line, the CR-1, CR-2, and CR-3E.  While bearing the Argus logo, it appears that Argus did not distribute the cameras, but were distributed by the IMC Division of Interphoto Corporation.  The first thing one notices about this SLR is the strange flattened curvy prism housing.   I actually like it, as it's a big change from what everyone else was doing. However, it also bears noting that the Voigtlander/Rollei SL35 of 1976 has a similarly shaped prism housing.  The second obvious thing about this camera is only apparent when you hold it - it's a beast, and built like a tank.  Much of my information about this camera comes from Henry Gambino's excellent book, "Argomania."  However, Mr. Gambino made an error when he said the camera has a cloth focal plane shutter.  It's not - it's a metal-bladed, vertically travelling Copal Square shutter that was commonly seen in Cosina and Chinon cameras.  The shutter has the typical B, 1-1/1000 speeds, and the ASA markings go from 10 to 1600. The metering is stop-down, and the meter is actuated by pressing halfway down on the shutter release, with the typical +/- metering needle indicator on the right of the viewfinder.

My example of the the CR-1 came with the 55mm f/2 Argus Auto-Cintar lens, which has the matching indentations on the focus ring that you see on the shutter speed and rewind dials. I purchased the camera on eBay  in November 2020, and paid $30 + shipping. When I was actively engaged in Argus collecting (2002-2011), the CR series SLRS would often show up at camera swaps, and because they were not actually made by Argus, I was not that interested in them. I remember someone selling new in box CR-1s that were probably bought when stores were dumping excess inventory, when somewhat generic M42-mount cameras could no longer compete with the K-mounts, Canons, Nikons, and Minoltas of 1980. 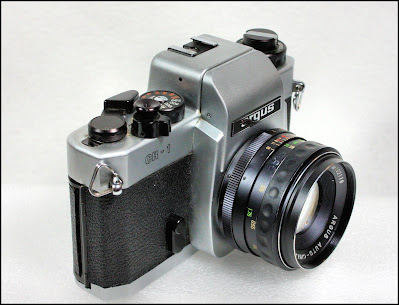 Once I was sure that the camera worked as advertised, it became my "keep in the car" SLR.  I also paired it with with the lovely Zenit Helios 44-M 58mm f/2 lens. With black and white film in it, it's always there should I need it.

Two features on the camera that I really like - the locking collar around the shutter button to prevent accidental exposures, and the large shutter button.  That Copal Square shutter sure makes a loud kerchunk when it fires, so there's no question that I have taken a photo.  The body has a typical hotshoe on the prism as well as PC connectors from X and M next to the lens mount.  The flash sync is 1/125 sec.  While I have read that the CR-1s have a decal with the model name, mine is definitey engraved on the front. The camera with a lens weighs 2.5 pounds, which is pretty hefty.  The tank-like build reminds me of the Ricoh Singlex TLS from the late 1960s.

Overall, the CR-1's design is its standout feature, as it has pretty much the same features as most M-42 mount SLRs of its time. The beauty of the M42 mount, or Praktica Screw mount is that you can find lenses for it for almost nothing.  As I have written before on RCB, there are a lot of wonderful M42 SLRs out there, with the Pentax Spotmatic F at the top of my list.  The Argus CR-1 is no Spotmatic F, but it sure isn't a  Zenit, either.  Chinon made a lot of SLRs, but the CR-1 stands out from the crowd. Note, if you live in Europe, you re more likely to find a Photo Quelle Revueflex 1001, which is the same camera, but with a different name.

Posted by mfophotos at 9:39 PM No comments:

The Camera in the Console

Several weeks ago, I was doing some clean-up inside my Ford Escape, and pulled out the old Olympus Stylus that had been sitting in the bottom of the center console storage compartment.  I don't recall how long I had kept it there, but it had a fully shot roll of Ilford HP-5+ in it.  It is the first version of the Stylus, as it has the 35mm f/3.5 lens, and it certainly is a good picture-taker.  I suppose that I had put it in the console so that I would always have a film camera available if I needed it.  That's not a bad idea, of course, and I was smart to use a b&w film to reduce the effects of the ravages of heat in the car.

So, yesterday I developed the roll of HP-5+ that was in the camera, and it must have been in the car at least 3 years.  There were lots of photos from Ann Arbor, a couple from a trip to NJ to record FPP segments, a stop for ice cream in Perry, MI, and some from places I can't quite figure out. The idea of a small camera that's available on a whim is a good idea, but I think I should have kept a small notebook to record where I took the photos.  Of course, maybe if it hadn't been in the car for 3 or 4 years, it would not have been so difficult to remember!

There is something to be said for the developing of a roll of film that's been forgotten about. Often times, we get surprises and find little vignettes that we had forgotten about but were important enough to photograph at the time. Of course, in my case, I photograph so much that's its almost like breathing.

One of the big advantages of using a smart phone to shoot serendipitous images, is the fact that it records the location data and date of each image file. That's been very useful for me over the years, as I have had to recall where I was at a given time.  While the Olympus infinity doesn't have that capability, it does a good job of recording a scene onto a piece of film.  Of course, looking at the film later, leaves me with questions, and maybe that's a good thing. We need to use our brains to figure out puzzles, and as we age, it gets even more important.

Here are a few images from the roll of film. The HP-5+ was developed in HC110-B for 6 minutes.

Well, there you have it. By the time I finished writing this post, I had figured out not only where most of the shots were taken, but where I was sitting in the car when I took them. I just am unsure of the exact dates, but they seem to all have been taken in 2018-2019.

Posted by mfophotos at 9:38 AM No comments:

Last weekend I drove to Ann Arbor, Michigan from Weaverville, NC. It's about 11 hrs on the road, including rest stops, etc.  The purpose was to drive Beverley's vehicle with her to Michigan, and then I would return by air to NC the next day, and Bev would continue on to her parents in Ontario.  I knew that there wouldn't be a lot of time for photography, and I felt that digital would prevent any missteps at the TSA check in. I have flown many times before with film cameras, but I felt that a DSLR would be the easiest course this time.  However, I wanted something light, inexpensive, and not bulky.  The best candidate that I had was this Canon EOS Rebel XSi with the 24mm f/2.8 EFS STM lens.  I could have just used my iPhone XR, but there are times when a DSLR is so much better.

Now you probably are thinking "what's going on with Mark, I thought he was a dedicated Nikon user?" If you know me well, you'd know that I like to have a big toolbox, and I chose this combo because - lightweight, compact, good results - 12.8 MP, sensor, sharp lens, and it barely extends beyond the flash/mirror box. The Rebel XSi certainly isn't the latest (introduced in 2008), but you know what? It doesn't need to be. In fact, the lens costs more than a used body. The Rebel XSi is still a pretty decent entry-level DSLR with a cropped sensor, hence the EF-S lenses.  For a pretty thorough review from 2008 go to: http://www.digitalcamerareview.com/camerareview/canon-rebel-xsi-review/

With the 24mm pancake lens, the Rebel XSi is really lightweight and a lot of fun to shoot with. While the entry-level Nikons have a more refined feel and familiar user experience for me, I didn't have a DSLR that matched the Canon's attributes for this trip.  In fact, Nikon has nothing like the 24mm STM lens.

I didn't shoot much on the road on the Saturday driving towards Michigan, but on Sunday I had some time to do some shooting in Ann Arbor.  I had breakfast at Zingerman's Road House on Maple Road, which was a real treat. The Nichols Arboretum Peony Garden was at its peak, and since Adrienne used to be the person in charge of it, I knew that she would love to see some images of it this year.  The 24mm lens (36 mm equivalent in full-frame) did a great job with closeups as well as the bigger picture.  A bit of a walk at the edge of campus, and then it was time for me to go to Detroit Metro (DTW) to get on a flight to Greenville-Spartanburg International Airport. I don't think I have ever seen so few people at DTW, and the line through the TSA checkpoint was very short.    It was my first time walking to the B concourse, and the big tunnel with the "light show" was new to me.  My flight back was uneventful, and Adrienne picked me up at the airport (which has all of 10 gates).  We then went back into Greenville for some dinner and a walk in the lovely Reedy River Falls Park.  Then it was back home to Weaverville!

It was a bit of a surreal weekend, driving N to Michigan and flying home the next day. On the way into Michigan along US-23, we were greeted by a number of new billboards adverstising the pot dispensaries in Ann Arbor. That was perhaps the biggest change since we left Michigan.  The images that follow are all from the Canon Rebel XSi. Some were shot on b&w, the rest shot in color. 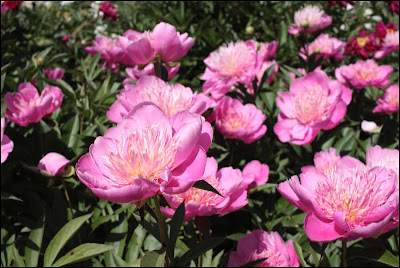 Posted by mfophotos at 5:04 PM No comments: