I received a surprise package in the mail about 6 months ago from a friend in the Upper Peninsula of Michigan.  She sent a still-unopened single-use camera from the early 1970s called the Techni-pak 1, sold under the Technicolor name.  The camera is a compact 35mm with a 20-exposure roll of color film.  I opened the plastic wrapper, and everything was pristine.  The back of the camera had all the instructions one needed to operate it, and in 1972, one could mail the camera with the finished roll to Delta Sales Corp. in Cincinnati OH + $5.95 and receive back 20 3.5" square prints, negatives, and another camera loaded with film.  Appearance-wise it looks like a small Kodak 126 Instamatic.  There are two aperture settings -- bright (f/11?) and cloudy (f/5.6?). The simple lens looks to have about a 40mm focal length. The camera was made in Hong Kong.

I was originally going to go ahead and shoot the film that came with the camera, but sanity prevailed.  It's probably C-22 process film, and over 40 years old, so the results would have been predictably abysmal.  I opened the back of the camera (there are two plastic tabs that hold the back on, along with the sticker with the instructions.  I was surprised to see sprocketed 35 mm film.  The supply side was rolled up into a tight coil inside a plastic sleeve.  The take-up spool is also unique, with plastic vanes inside that meet up with the film advance cogs.  Pulling up the film winding wheel releases the take-up spool. This of course, all has to be done in the darkroom, and the loading and unloading is actually fairly easy.

I tossed the original film and replaced it with a short length of Arista 100 film.  This allowed me to develop the film last night and scan it this morning.

Shooting with the Techni-Pak1
It's basically a mini Holga with the square format.  One must press in a small button before advancing the film.  It looks like there are flash contacts on the top of the camera for something like a Diana-F style flash with two posts. You can do multiple exposures if you want. 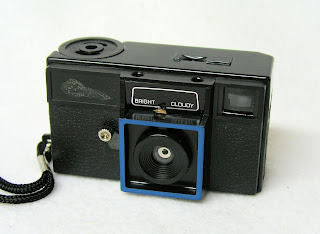 Results --
Impressive for this type of camera!  The square format is perfect, and the 10 images I shot on the Arista 100 film were properly exposed.  Take a look for yourself: 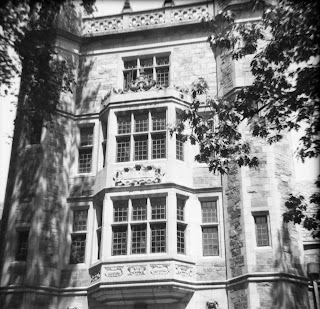 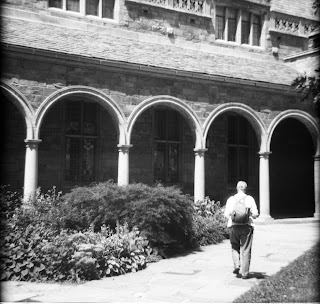 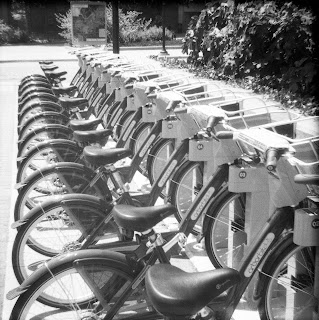 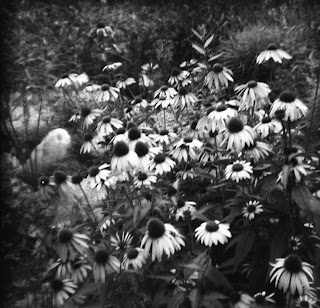 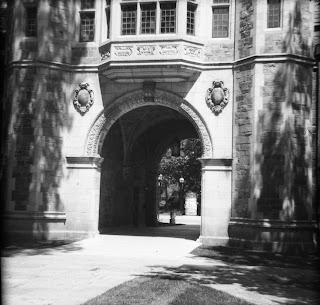 Canon Sure Shot 115u
A little history: 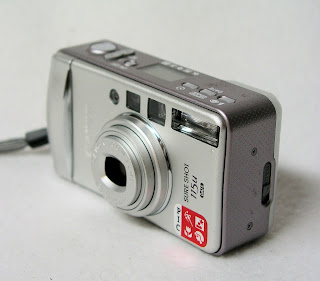 As we moved into the digital camera explosion, manufacturers still had to cater to the average consumer, and in 2003, a really good digital point and shoot was still quite expensive. Consumers were caught between buying a point and shoot digicam with about 3 megapixels  for around $400, and engaging in the new adventure of digital  prints, etc., or buying a film camera that used technology they were familiar with. Canon introduced  the Sure Shot 115u in 2003, a stylish, compact camera that also looks a lot like some of the digital cameras of that period.   It should be noted that it was expected that the world-wide market for film cameras was diminishing, as it was estimated that 50 MILLION digicams were sold in 2003.    That is a lot of cameras, and yet not all consumers wanted a digital camera, some opting for what they were familiar with.   My 85-ish mother in-law was thrilled last year when I have her a fairly recent high-end Canon P&S to use, as she really missed "getting prints."

In June, my buddy Marc and I stopped at a Goodwill store in Petoskey, MI.  I don't usually expect to find much in the way of cameras these days, but I ended up buying a nice-looking Canon Sure Shot 115u.  At first glance it looked like a digicam, but  for $1.99 I figured it was worth a try to run some film through it.  When the camera was new in 2003, it sold for about $130.  This particular camera looks like new, and like many film P&S cameras, it was probably quickly relegated to the closet as a digicam replaced it soon after it was introduced. 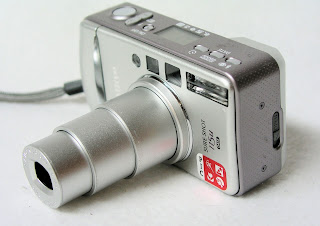 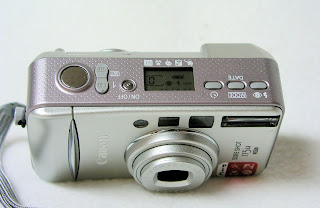 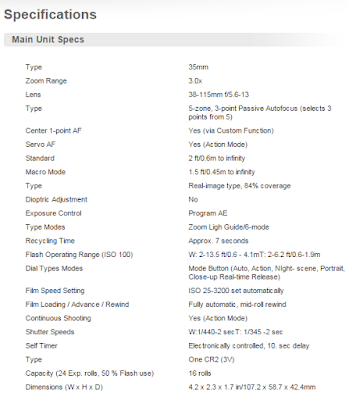 Why bother with late-model P&S cameras, anyway?
As someone that appreciates classic cameras -- and I have definitely had my share of them over the years, a plastic P&S camera must seem like a silly purchase.  But remember, these later high-end models have pretty much all the features one might desire in a 35mm pocket camera - a zoom from 38mm to 115mm, various shooting modes, excellent optics, and as much technology as one can pack into such a small space.  In addition, a print from one of these cameras, using good technique and low ISO film would have blown away any digicam at that price point. In fact, this Sure Shot can handle 25 - 3200 ISO film.  Don't confuse such a camera with the tons of trashy plastic cameras that were available at the time.  In my mind, however, this camera would be perfect if it had only a 35mm 2.8 lens.  Without the zoom, it would be lighter, faster, and a perfect P&S for snapshots and street photography. The typical f/5.6 aperture is due to the zoom feature.  A wider, faster lens with no zoom would be preferable, in my type of use.

I ran a roll of expired Tmax 100 and while I did not use the camera as I normally might have tested a camera, the results are satisfactory.  I'll try a 400 ISO color film in it next to see how it does.  Don't underestimate these cameras, they can produce some good results.   At some point, these newer P&S cameras will become quite "classic."  If you see one for less than $20, pick it up, and use it.  I think you'll be surprised at just how good they are. 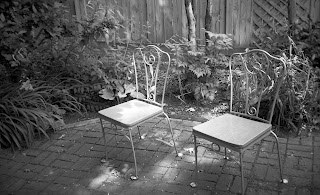 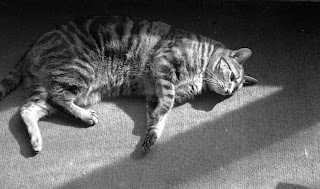 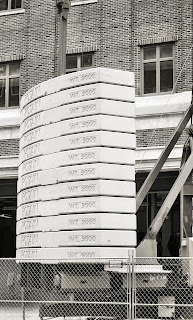 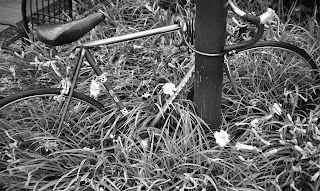 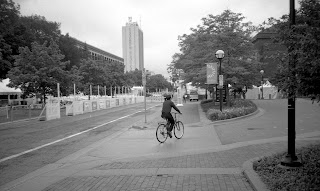 It's true that the "best camera" is the one you have with you, and these compact 35mm and APS point and shoot cameras were easily carried around.  It's a shame that they are not more appreciated than they are.  While the all-metal classics may have all the retro appeal, some of these plastic wonders are possibly better in terms of features and compactness.  However, its obvious that now your phone can probably do a better job, since it's always with you.  In 2003, well, that was not the case.
Posted by mfophotos at 11:33 AM 1 comment:

Well, it seems true that the older you get the faster time goes.  I am not sure where the month of June went, but I know that I have some of it captured on many rolls of film.  First of all, there was getting our gardens ready for the Ann Arbor Garden tour, which took place on June 13.  So, the first half of the month was taken up by that.  It was a huge success, and we had over 800 people go through our yard in 6 hours that day.  Hardly time to take any photos of event, as I was busy answering questions and chatting with visitors all day. The rain held off for the most part, and a constant stream of visitors went through.


Then, there was  Photostock 2015, which has become a yearly rite of photographic cameraderie (intentionally misspelled) in NW Michigan.  Bill Schwab continues to make the event relevant and attract a growing ban of people that are not only excellent photographers, but darn good people.  My buddy Marc Akemann and I went together, and as is the case on our photo trips, it was a lot of fun and I went through far more film than I thought I would.  I met some very interesting photographers that presented their work at the Birchwood Inn.  Anne Berry and Lori Vrba showed their passion for their work, and it certainly resonated with me.  Photostock is more than a bunch of photographers playing with their gear, talking, and drinking over the fire -- it has always been a source of inspiration where we get to see what other photographers are doing, and what photography means in their lives. It is easy to say "Photography is my hobby." It's often harder to tell others your motivation, what inspires you, and what role it play in your everyday experience.  You can get that at Photostock.   Just a few samples of images from Harbor Springs are below.


On the way up and back, I continued photographing all of the post offices that I encountered on the back roads that we drove.  Someday, they will be put together in a book, but it really is one of those long-term projects.

Back in Ann Arbor, I went to drop off a roll of color film to be processed at CameraMall, and finally succumbed to the lure of the Fuji X100S camera.  It's another tool, of course, but it's pretty damn nice.  I'll do a separate post on it soon. My initial feeling is that Nikon should allow Fuji to design a camera for them.  This one has the look and feel of a film camera, and the results are wonderful.

The next week found Adrienne and I traveling to Luther, MI for the annual Michigan Entomological Society meeting at Rockwell Lake Lodge, which is owned by Hillsdale College.  It was a great time to see colleagues and friends, and I was presented with a Honorary Lifetime membership for my 30+ years of service to the Society.  I really had no idea that would happen, and I was pretty much speechless when it happened.  I have never been so surprised!

So, here it is July 5th, and in another day we are travelling to Marquette for a few days, and I'll report on that trip after we return.