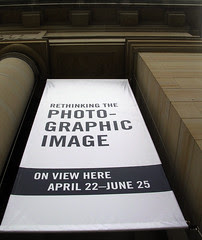 UMMA Exhibit
Originally uploaded by argusmaniac.
I spent an hour and a half today at the University of Michigan Museum of Art (UMMA). The traveling show from the George Eastman House is "Rethinking the Photographic Image." This show is a definite MUST SEE, if you like photography. There are prints there by William Talbot, Margaret Julia Cameron, David Octavius Hill, Atget, Brady, William Henry Jackson, etc. etc., etc. It's like a who's who of photography, though I am less familiar with the names from this century. You will have seen many of these images in photographic history books, but these are the real deal. Not only that -- think of it -- all are from one museum.

I'll be going back again. When I see all these great examples from various photographers -- one man really stands out -- Edward Weston (surprise). Others will undoubtedly have their favorites. Be sure to visit the paper gallery in the basement, as there are some wonderful examples of Hollowood glamour photography that are part of the exhibit.

One thing that was missing were Polaroids...I wonder why?

This exhibit definitely whetted my appetite for visiting the Eastman House in Rochester, NY. Sounds like a summer trip this year.
Posted by mfophotos at 3:27 PM No comments:

Oh, How I love Tech Pan! 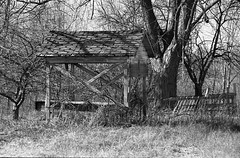 tangles
Originally uploaded by argusmaniac.
Yup. I do. And a lot of you are wondering what the hell I'm talking about. Last year, Kodak stopped producing Technical Pan Film. A b&w emulsion that can be used as a high contrast film with one developer (such as D-19) for pure black and white images, or as a lower-contrast pictorial film with a wide range of grays using Technidol developer (or some other common developers in weird dilutions).

Ahh, you are probably saying, "So it's just a b&w film..." yes it is, but one without any appreciable grain at big enlargements. It's also very slow -- ISO 25, which in today's high speed world, is glacially slow. But, that slow speed means 1/60 at f11 on a sunny day. Or, use tripod. What you get are amazing enlargements from a 35mm film that look as though they were shot in medium format.

The beauty of different films (especially b&w) is that each film has a different character, different spectral response, different grain -- and grain dependent on the developer used, as well as a "feel" that is SO different from digital. I am not a big fan of a lot of photoshop post-processing. The problem with digital b&w, is that every image has a sameness to it -- no grain, no "bite", no serendipity.

So, I am not anti-digital. But I am PRO- b&w film for a lot of good reasons.

The sad part is, Kodak stopped making TechPan, but lucky for me, I have about 300 feet of it in my fridge. So, I'll just keep shooting with it until it is eventually gone forever. I just found this interesting article on a small resurgence in b&w photography here. So, you see there IS an alternative to Tech Pan. 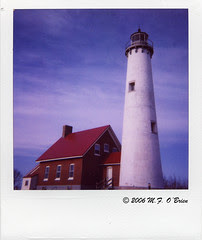 Tawas light
Originally uploaded by argusmaniac.
Yesterday, Marjorie and I went on a long-overdue road trip -- the kind where we have a general destination in mind, a car filled with photographic equipment, and a day of great weather. We drove up to Saginaw, getting on M-13 from below Birch Run, and took the scenic route, which is what a Road Trip is all about. The journey is the reward kind of thing.
We spent a couple of hours in Saginaw, which has a lot of pretty architecture, though some parts of the city could use some urban renewal of some kind. The Castle Museum -- a former Post Office is a wonderful piece of architecture, and right next to that is the Hoyt Library, built in the late 1800s -- a Richardsonian Romanesque beauty! Marjorie also photographed two theaters, and some other structures -- the Second National Bank building is an ornate beauty.

We then made our way on M13 to Bay City. We were very surprised with the beauty and busy downtown of Bay City. Lots of antique stores, and quite the contrast between Saginaw and Bay City. We spent several hours there (and of course they have a STATE theater), and enjoyed walking around. Lots of small shops and eateries to explore someday.

We then made our way to Tawas along US-23 -- a route I have not been on in quite a few years. Pinconning, Standish, and Tawas are all interesting small towns. I did bring along a Polaroid camera to complement the Nikon D70s, N8008; Diana, and plastic 35mm camera. I surprised myself with some very nice images from the Polaroid, which is the featured image here.

We logged about 370 miles, and thankfully, Marjorie drove most of the way back, as I had a nasty headache that only got worse after I got home. Must remember to bring the sunglassses next time.
Posted by mfophotos at 11:26 AM 1 comment:

itsy-bitsy spiders
Originally uploaded by argusmaniac.
Today dawned cloudy with some sprinkles, and then it cleared for a while. Adrienne had stepped out into the backyard to admire our spring flowers, and I heard her say "hey, come and see this... it's really cool." I had no idea what it might be, but she pointed to a spot above our fence. I looked. At first I didn't see anything, then I saw the faint line with a bunch of little moving objects. It was a single silk thread with hundreds of spider hatchlings going down (most of the time) from their egg sac beneath the soffets to the top of the fence, and eventually, all over the yard and elsewhere. Each one was maybe 2mm long. At times they looked like a string of beads, and sometimes they would clump together, or spread out in some seemingly organized fashion. Amazing to watch.

I got out my Nikon D70s and used my 60mm micro-Nikkor and added the Nikon 6T diopter for some extra magnification. The image on flickr can be enlarged, but all I did was crop it to give it a more vertical orientation.

Macro work is where the DSLR really shines.
Posted by mfophotos at 9:41 AM 3 comments: 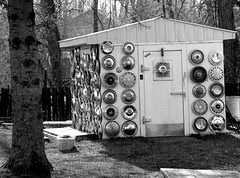 Hell, Michigan
Originally uploaded by I am Jacques Strappe.
This photo was taken by Marjorie, and why I didn't shoot this place is beyond me. Maybe because I was driving...

Last Saturday, Marjorie and I went all over the place, even Hell, to explore and shoot photos. She's getting some very nice recognition on the Michigan In Pictures Blog as the featured photographer.

You can see her featured here:
MichPics
Posted by mfophotos at 1:39 PM 2 comments: 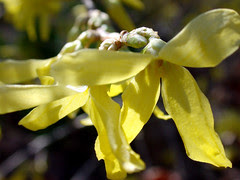 forsythia
Originally uploaded by argusmaniac.
We are getting a stretch of nice weather. Today it's in the mid-60s, and is supposed to by warm and sunny all week! Just in time for finals at UM...

Today, Marjorie and I went over to campus and downtown, looking at architecture, people, and art installations that students have been putting up around campus. Some are rather interesting. We also saw a bunch of participants in medieval garb whacking each other in combat. It looked like a lot of fun. Well, until someone gets hurt...

I hope spring has touched you today, too.
Posted by mfophotos at 6:38 PM No comments:

Waiting for it to start 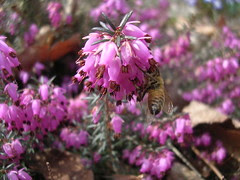 bees are busy
Originally uploaded by argusmaniac.
I'm getting a little impatient with the weather. We get a day where we have a hint of spring, and then it cools off, rains or snows. This spring so far has been chilly, and it's been wonderful to have a sunny day. I think the plants seem as impatient as I am...

I was walking home Thursday afternoon, and a garden along Brockman caught my eye with a nice planting of a heath, Erica cinerea. There were about a dozen honeybees at the flowers, taking advantage of the warmth and sun to gather nectar. Of course, I didn't have my SLR, but I did have my little pocket coolpix, and it did all right for this subject.

I will be happy when the bugs are out in full force, so I can use my D70s for macros.
Posted by mfophotos at 10:05 PM 3 comments: