I'm going to discuss 35mm film formats, since that's the most-often used film, and the panoramic options are more affordable.  To get more of a landscape in your image, one can go the wide-angle route, using lenses with short focal lengths such as 28mm down to 16mm.  My favorite wide focal length is 24mm, because it's not so wide that there is going to be major distortion in perspective, compared to 19mm or 20mm.  However, the problem with just using a wide-angle lens is that all of the scene, from sky to foreground is there, unless you crop it out.  The better solution to a wide-scape is to use a wider frame of film for the scene.

While a standard 35mm still negative image area is 24 x 36 mm, there are other formats that will affect the area of the scene captured.  You may often hear about panoramic format images from 35mm and the typical, easy way to do that is simply to mask a 35mm frame so that it ends up with the negative area that is about 15mm high x 36mm wide.  There are many 35mm point and shoots and a few SLRs that do this trick by using a horizontal mask at the top and bottom of the frame. It works quite well, but the downside is that you have also lost some resolution, as you are cropping the 35mm frame to a much smaller area.  Making enlargements will often be grainier and less sharp. However, with a wide-angle lens and a good exposure on fine-grained film, the result can be quite acceptable.

The better way to present a wider-aspect ratio image is to increase the frame size. To do this, the camera needs to have a wider film gate, and a lens that will work with the wider image circle. There are several options for this, and most of them are expensive. The one camera that's probably most coveted for wide shots is the Hasselblad X-Pan (made by Fujifilm, and also known as the Fujifilm TX-1). The negative area for that camera is 24 x 65mm, almost double the frame width of a typical 35mm.  The price of such a camera now is beyond the means for most of us. So, what other choices are there?  Well, fear not.  My list that follows are low-cost solutions to the panoramic problem.

This is the low-fi, low-cost way to shoot a cropped frame panoramic. Amazingly enough, the images are better than one might expect. They have the toy camera aesthetic, and with the 27mm lens, one gets a true wide-angle for the best result with the cropped 13x36mm negative.  The shutter speed is about 1/125 sec, with an F/11 aperture.  The panorama mask is removeable so that you can also get standard 24x36mm negatives.   Ebay prices are quite low, ranging from $5 to $20.  Ansco Pix Panorama  cameras are quite common (not made by Ansco, but by Haking in China), so don't overpay for one.  Due their easily pocketable size, they provide a fun and easy way to get a panoramic look.  On sunny days, ISO 100 films should be just fine, otherwise ISO 200 or 400 films.  Kodak's Tmax 100 for b&w would be a good choice for sunny conditions. There are many other 35mm cameras with a panorama mask and wide-angle lens, such as the Ricoh R1, Minolta Freedom Vista, Olympus Trip Panorama, Yashica Microtek Zoom 70,  Nikon Lite Touch AF 600, Vivitar IC101, Vivitar T200, Vivitar PN 2011, Pentax UC-1, etc. 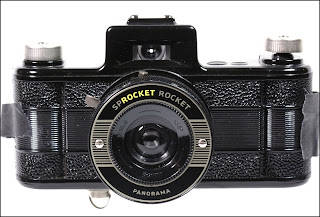 Lomography's Sprocket Rocket is a great plastic fantastic panoramic camera, which I discussed in 2017.   The Sprocket Rocket's real frame size is actually wider than the X-Pan, at 24 x 72mm, or two full 35mm frames.   With its 30mm f/11 and f/16 lens and only Instant (1/100) and B shutter speeds, it's limited in the ways that an X-Pan is not.  However, it does have a tripod socket, so lengthy exposures are possible.  Best of all, it's an easy to carry-around camera that takes pretty darn good images. There's some vignetting, some blurred edges, and a bit of distortion, but I love the images that I get from this camera.  I do not care about showing the sprockets, and they are cropped in my scanner frame, anyway.  With a 36 exposure roll of film, you will get about 16 shots.   I have found that using 200-400 ISO film works great in most conditions.  My favorite film to use with this camera is Eastman 5222 (Double-X). 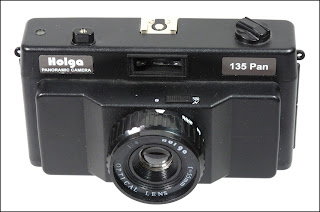 The Holga 135 Pan looks much like an elongated  Holga 120N.  It has a removable 55mm f/8 lens plus an f/236 pinhole lens.  The frame size is 24 x 72 mm - again, a tad wider than the X-Pan. It's zone focus, and has two shutter speeds - ca. 1/100 sec and Bulb.  It also has a tripod socket and a hot shoe for flash.  I have used mine as a pinhole camera and also with the regular lens, and I prefer the 55mm lens. I reviewed the camera back in 2012.  I don't think the images are as sharp as the Sprocket Rocket, which is due to the Holga lens. However, if you want to shoot wide with a toy camera, it's one to consider, and it's definitely given me some memorable images.

I reviewed this solution in 2010, and the resulting frame size is 24 x 55 mm, because you are using the 35mm film in a 120 film body.  The biggest drawback in my opinion is the frame counting is tedious, and you can't rewind the film without taking the camera into a dark bag and unloading it.  You can also put 35mm in film other medium format cameras, and only a 6x9 format makes this desirable.  There are many hacks for doing this, but in most of the instances, you can't rewind the film in camera, which does make this method cumbersome.  In addition, the medium-format lenses are typicall "normal" and not wide, so the effect won't be quite the same as a panoramic camera.

Using a 35mm adapter in a Pentax 6x7 ought to give nice results if you use it with a wide-angle lens such as the 45 or 55 mm lens. There are 3D printed adapters available online.  One photographer has blogged about his impressive results.  A Mamiya RB67  can also be modified to work with 35mm, and as with the Pentax 67, there are some online sources for a DIY or finished product.  Again, all of these adapters require you to rewind the film back into the cassette by using a dark bag or darkroom. If you already have a Pentax 6x7, then the adapter is a low-cost entry into 35mm panoramas. I plan on trying one out this year.

The other option is to use a swing-lens panoramic camera that does not distort the images the way toy cameras are prone to do. The Horizont cameras, manufactured by Krasnogorsky Mechanicheskiy Zavod (KMZ) in the Former Soviet Union (FSU), debuted in 1966, and use 35mm film with a 24 x 58 mm framze size.  KMZ is also known for its line of Zenit 35mm cameras.  The Horizont features an 28mm f/2.8 Industar lens and four shutter speeds, ranging from 1/30 to 1/250 sec. It was replaced by the Horizon 202 in 1989, and then by the Horizon S3Pro in 2003.  Lomography now sells the Horizon Perfekt, which has an ABS plastic body, easier controls, more streamlined shape, and is made in the Zenit factory.  Another model from Lomography is the Horizon Kompakt which has only 1 shutter speed and an f/8 aperture. A new Horizon Perfekt will set you back about $350, with the older models going for less.  The Horizont will give you sharp images, and is a heck of a lot cheaper than the Widelux or Noblex swing-lens panoramic cameras.    My Horizont arrived the other day from an eBay seller, and I am just testing it out now.

To sum it all up, shooting a scene on a wider negative provides a much different view than a standard 35mm frame, even if a wide-angle lens is used.  You can of course, crop any image to get a wider aspect ratio, but cropping is at the loss of image area, whether film or pixels. A wider negative in panoramic format presents the viewer with a more dynamic depiction of a scene.

Of course, you do not have to shoot panoramas horizontally.  Vertical shots are really fun, and provide a definite vertically dominant image.

If you want to really go with film real estate, you can choose among medium-format cameras, with 6x12 and 6x18 cm being very amazing, and also very expensive.  However, there are a number of people that have produced 6x12 cameras using 3D printing.  The Kraken 6x12 from Graham Young is a good example. This makes shooting wide in medium format much more accessible. Lomography's Belair also does 6x12 at a reasonable price, but my sample of the camera never seemed to focus accurately, and I really never warmed to to it.  Of course, there are Widelux and Noblex cameras that use 120, and are pricey.  The cheapest 6x12 would be the Holga 120 Pan that has a 90mm lens and the typical Holga construction.  However, it's probably no longer in production. On the higher end of the scale, Linhoff and Fujifilm have the extreme wide panoramic cameras with prices and image quality to match.


Posted by mfophotos at 1:43 PM No comments:

In issue 3 of Monochrome Mania, I provided estimated shutter speeds for most of the cameras that I listed. At the time, I had not tested the speeds with my shutter tester - The Phochron  XA. I probably should have done so before publication, but it just didn't happen.  One of my readers asked me if I had checked the speeds or used the ones given in the literature. The ones provided in the various sources are what I used, because they are the benchmark numbers that provide a basis from which to work from.  I don't expect any of these cameras to have the same shutter speed across all examples.

Today, I went and tested a number of my toy cameras. I repeated each shutter activation 6-10 times, and got an average speed.  The numbers listed below don't mean that every example of a camera will have the same speeds, but you can compare what I found with the published speeds and go from there. All shutter speeds from my test are given as the average.

First up is the mighty Diana, and the shutter speeds of the original versus the Lomography Diana + are definitely different. The original Diana shutter speed was given at about 1/60, and the Diana + at 1/100 sec.  Here's what I found.

I realize that I didn't provide a shutter speed for the Holga, but it's considered to be about 1/100 sec.

The literature says the shutter speed is 1/30 sec.  Mine has a speed of 1/32 sec., which is certainly within the tolerances!

The typical speed provided is about 1/35 sec.  My example has a shutter speed of 1/50 sec.

My example's shutter speed was 1/50 sec.

I guess my example's shutter must be a bit fast, as the shutter speed was 1/106 sec.

My example of this camera has a shutter speed of exactly 1/60 sec.

I did not test all of the cameras that are in Monochrome Mania, as some have film in them, and the construction of some makes it difficult to do a speed test.  Your examples my be different from what I found for my cameras, or they may be the same.  However, I think that even if they were fresh from the factory, there would still be variance in the shutter speeds. These are not precision cameras, so do not expect precise shutter speeds.  My biggest surprise was with the Diana and Holga cameras. I did not expect the Holga speeds to be over 1/150 sec, nor did I think that the Diana+ examples would be so different.  However, as I have said before, the variance in performance of those cameras makes them ideal candidates for owning several, as they seem to have individual character.