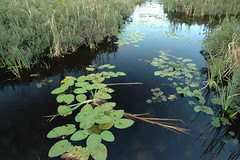 wetland
Originally uploaded by argusmaniac.
Well, a week ago, we travelled to Marquette to take our daughter Marjorie to NMU tos tart her freshman year at NMU. My wife and I returned home Sunday, after spending a couple of days at a cottage on Burt Lake. Marjorie is doing fine - we get a call once a day and of course, email. She'll be busy with classes and following new paths at college. Meanwhile, at home, it's taking some time to adjust to not having the focus of our activities here for the last 18 years. There is this new-found freedom of sorts... I just hope that I put it to good use.
Posted by mfophotos at 5:52 PM 1 comment: 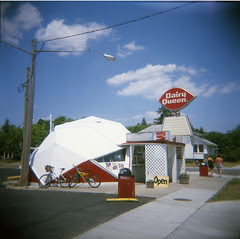 Alpena's Geodesic DQ
Originally uploaded by argusmaniac.
One of the things I have enjoyed this summer has been the numerous short trips my daughter and I have taken, and the myriad of photographic opportunities that have arisen during them. Sure, we all have a destination to get to. But instead of taking the interstate and main roads all the time, consider a lesser highway, another route, or even dirt roads (which are still plentiful in Michigan).
The beauty of going somewhere without a plan -- other than to be flexible-- is that you see things. See a cool barn? Stop along the road and take some photos. See a neat little store? Stop and go inside. It's likely that you will find something that appeals to your interests on such a trip. I hate to use a cliche title from a book, but "The Journey Is the Reward" is appropriate in this case.

I used to be rather introverted, not talking to people, and believe it or not -- shy. Becoming a photographer changed a lot of that. Of course, I hate the typical... "are ya taking piktures?" but the camera has often become an introduction into what I do, and sometimes, talking to someone for 5 minutes will give me more information on a place than I could have ever found out on my own. For instance, earlier this summer, we stopped at a small place called Montague. There was a sign for an old drugstore still hanging at the entrance to what looked like an old-fashioned place that had a real old-time soda fountain. I told my daughter we should go in and get something. As the woman that served us made our chocolate malts, she told me that her father had owned that drugstore for many years, and had to sell off most of it to have money to pay for the care of his ailing wife. The duaghter owns a part of the building, and she's operating the section that was the original soda fountain -- everything there was vintage 1940s-50s green and chrome. She buys parts on eBay. I never would have known all of that if we hadn't talked. Of course, the malteds were good, and only after we got in the car did I realize that I had spilled some all over the front of my shirt...
Posted by mfophotos at 8:45 AM No comments: 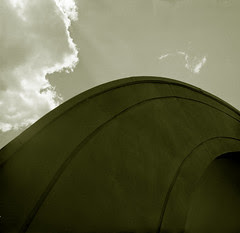 arc and sky
Originally uploaded by argusmaniac.
In case you haven't noticed, I seem to have a thing for man-made structures set against clouds. Sort of like chaos meets order. Or perhaps structure meets nature. whatever. I sense I have a theme going here, and I realize that it really does take time to put together a body of work. Especially so, if one is not a full-time photographer. On Sunday, Marjorie and I ventured down to Adrian, MI. We found a newly-opened coffee house and art gallery -- Davinci's Coffeehouse. I spoke with the person in charge of exhibiting, and I think I will forge ahead and try and get a show together for them. Nothing ventured, nothing gained, right?
Posted by mfophotos at 12:09 PM No comments:

Getting my act together 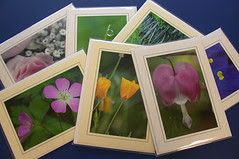 Getting my act together
Originally uploaded by argusmaniac.
It has taken a while for me to think that I had enough saleable images of consistent quality to actually put them into a series of photocards. I'm trying to figure out what my pricing will be -- and I'm in the range of 3.50 to 5.00 -- what are your opinions? I think right now, I am leaning at $3.75 each, or 4 for 12.00.

The cards are real photos (not ink-jet crap), and come with matching 5x7 envelopes and are packaged in a mylar envelope. Obviously, they can be framed as is, or used as blank greeting cards.

I guess my next move is to see if I can find some local outlets for them. I feel they are as good, if not better, than some of the other photo cards I have seen out there. If you are interested in purchasing some, just because you are a reader of my blog... 3 cards for $10, which includes postage. You can pay me via paypal.

The catalog is here Classic Michigan Shore
Originally uploaded by argusmaniac.
Marjorie and i went on another photo safari last Friday, with the eventual goal of the Traverse City area. She had 10 or so theaters on her list to photograph, and I think her final ccount was 11. We started with Grand Ledge and wound our way through to the west coast near Muskegon, hitting Grand Haven, Whitehall, Montague, Pentwater, Ludington, Manistee and Onekama on day one. Saturday, we started with Frankfort, Point Betsie, Empire, Glen Arbor, Suttons Bay, Traverse City, and Elk Rapids. We spent a lot of time in Traverse City, and even saw Michael Moore there, promoting the Traverse City Film Festival, which looked like a lot of fun. I can't begin to describe many of the sights that we saw along the way. The rolling hills of orchards and vineyards, farms and gardens, beautiful cottages and awesome houses, small towns with character, and the many things that say "this is Michigan." One of my favorite images so far is this one from Portage Point on Lake Michigan, near the small village of Onekama. When I think of lake Michigan shoreline... this image is the quintessential embodiment of that. Not so much the lake itself, but the sky and the dunes, and the grasses.
We did almost 900 miles on our trip, and in 3 weeks, Marjorie starts college. So, this trip was extra special for me.
Posted by mfophotos at 9:35 AM No comments: