Busy in the Waning Days of November

For some reason, I have not posted anything in a month on this blog.  I blame it on the time of year.  It's not that I haven't been shooting, because I sure have.  I have some posts in progress, but I haven't developed the film yet, or I have the film scanned, but haven't written the article.  However, I think my biggest excuse is that I have been busy getting work ready for two exhibits, as well as finishing some printing and, matting, and framing for some sold pieces and for gifts.  I don't know about others, but getting ready for a show is for me, an emotionally draining experience.  I do all my matting and framing, and while not exactly rocket science, it does require care and planning and proper technique for a good result.  One show I am in (which I will post details on at the end) has six other photographers, and I have 7 images in that show, which is appropriately called "Seven Views."   My color prints are done by MPix, which are the largest prints so far that I have done for an exhibit - 12 x 12 and 12 x 18 inches. All frames are 18 x 24 inches.  My dry mount tissue is 11 x 14" so I had to carefully use two pieces under each image.  I have hundreds of sheets of 16x20 dry mount tissue, but it is not for RC color prints.  I ordered 7 18x24 frames from Dick Blick, which arrived quickly in perfect condition, and in fact, it was several weeks after I first received them that I used them.  They came 3/box and one single frame done separately.  That single frame turned out to not be 18x24, but 20x24!  A good thing I had something hanging in the house in the same frame style and in 18x24.  Of course, this was all less than a week before the show opened.   I also had to buy more mat board from Dick Blick.  I have to say, that it was well-packed, and I am really impressed by the care the company takes to make sure the customer is satisfied. The second exhibit, in which I have two pieces, was a lot simpler, except that my frame size was 14 x 18, so I had to get some glass cut for the frames.  Why 14x18" ? Well, with a 3" mat border for an 8x12" print (I am one of those people that fill the frame to the edge), that makes 14x18", if you want a uniform border.  This also means that most pre-made frames are out, as most of those are 16x20 - which is an awful lot of white space for an 8x12 print. Trust me on this, I have done a lot of those. 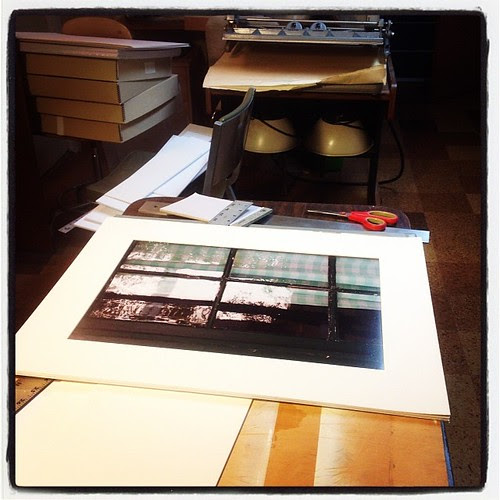 What about the exhibits?  The Seven Views opening was wonderful.  Raymond James and Associates is an investment firm in Ann Arbor that sponsors a rotating artists' series, and the show is on the walls inside their building.  Mike Myers coordinated our show and herded the cats, and it all came together Friday, 11/22. At least 130 people attended the opening of the show, and our hosts put on a great feed with catering from Jefferson Market.    Lots of great comments and interest in my work, and in the work by the 6 other photographers.  I didn't sell anything the first night, but it is up until the end of February, so hope springs eternal.  There were 5 sales that first night, though, which I think is pretty good. 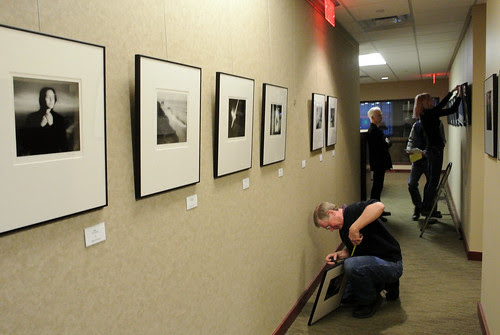 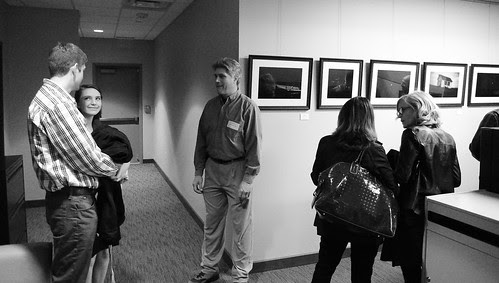 The second exhibit is a little different - 50 Shades of Green at the Matthaei Botanical Gardens, which opened just before Thanksgiving.  I have two photographs in the hanging art part of the exhibit, which of course features displays in the Conservatory, which has green growing things -- something to enjoy this time of year!

I have a pet peeve about shows featuring natural history subjects, and get ready for a short rant.  If you, the photographer (painter, etc) put a name on a description of the animal or plant (or other object) in your work. Make sure it is correct.  Calling  Switch Grass a Bluestem may not seem like a big deal, but it's no different than calling a vulture an eagle, or a butterfly a moth, etc.  Your audience is by large, going to be more discerning of such things than a more general population at a different venue. If you identify a subject wrong, it takes away from the photograph, as some people will think that you don't know your natural history, and in a venue that attracts a lot of folks knowledgeable about plants and animals, you are going to look bad.  If you are not sure about an ID, there are lots of online resources as well as books.  You can always ask someone more knowledgeable than yourself to check it.  If you want to waffle a bit, then title your work without identifying the life form. End of Rant.