Not Cross at Cross-Processed

My first experience with cross-processed film was a bad experience. Back in 1980, I had mailed a bunch of slide film off to be developed, and somehow, one of the rolls was developed in C-41 chemicals, and I got very green prints back. That might have tinged my view on cross-processing (xpro) just a bit. Over the years, xpro has been one of those odd bits of photographic practice that when done right, it can be quite awesome and entertaining. As digital replaced much of the film use, xpro became the "hipster" thing, since it seemed so, so..."Lomo-ish." Then of course, there are xpro filters for digital files, which I won't get into here. The problem with cross-processing isn't the process, it's the mistaken belief by some that any cross-processed image is inherently better than a normal one. My belief is that crap photographed is still crap, no matter what color you make it.

There are really only two ways of cross-processing -- E6 (slide) films developed in C-41 (print) chemistry, and C41 film in E-6 chemistry. I do not call developing any color films in b&w developers xpro, for the simple reason is that you are only getting a b&w silver image, not a transference of different colors and saturation.
In my opinion, the best results are from E6 films in C-41. With E-6 minilabs disappearing from the scene today, it is less likely that anyone is going to go the C-41 into E6 route. In fact, because C-41 is still the only available local process for many people, I would expect that xpro might become more commonplace for people with E6 film to shoot, if the lab will allow it. (I read somewhere that so long as the total rolls of E6 through a C41 minilab do not exceed 20% of the capacity, the chemistry will be fine.)
When should one use xpro for E6? If your slide film is expired, it's a great time to use it for xpro imagery. If you have Tungsten-balanced film such as Ektachrome 64T, try it with night shots and xpro. Old Fuji Provia 400 looks contrasty and grainy, and has a very "vintage" 1970s look. There are plenty of odd E6 films to try out, and if your lab will process them in C41, you can have a lot of fun seeing what films give the results that please you the most. Locally, I thank Huron Camera in Dexter, Michigan for doing the cross-processing.

Subject-wise I recommend sunny, high-contrast scenes which seem to offer the most colorful and contrasty images. Subdued scenes can look muddy and exhibit less of an obvious xpro effect. In any case, play around and have fun.

Success with the Diana Pinhole

Back in late May, which seems so far away now, I spent a week in Marquette, MI and spent most of my time there doing photography. I think it was a very productive time, and I ended up with a number of really good images. Some were digital and some were film. I sometimes take a while getting around to developing the films from such bursts of creativity, and the last of the 35mm was done a few weeks ago. Last weekend I finished up the 120 film. One roll was from my Diana+ (from Lomo), which has the pinhole setting. I rarely have used that, and I'm not sure why. Anyhow, I was at Presque Isle, late in the day. Though most of the day (and that week, for that matter) was hot, that evening, an offshore breeze was bringing in cool air from the still cold Lake Superior. A storm was threatening, and I was hoping to get some dramatic shots. Well, the storm didn't materialize during the daylight hours, but the cloud buildup was nice. The temperature must have dropped 30 degrees along the lakeshore, and I was getting cold. My last few images for the day were taken with the Diana. I set the tripod up along the shoreline and the rocky shore provided some contrast to the lake as it was merging with the sky. I made a series of exposures -- all just guesstimates on the B setting, of course. I think the one above captured the scene the best.

Posted by mfophotos at 9:51 AM No comments:

No Kindles or Nooks Here!
On Friday and Saturday (9/10 and 9/11) I went over to the annual book sale of the Ann Arbor chapter of the American Association of University Women (AAUW). The AAUW sale has been held at Washtenaw Community College for a number of years, and is a great place to shop for books. Usually, I look for books on photography and history, and whatever else catches my eye. That's the fun aspect, as I never know what to expect. I always expect that I'll find something of interest, and I have been pretty good at not buying books I already have (unless I get an extra as a gift).
I really do not need any more books on "how" to photograph. I believe my library is darn good there. Now, I look for books to broaden my knowledge of other photographers, historical accounts, and show catalogs. This year, I think I did pretty well in finding some good titles and great photographers, some of which are local. 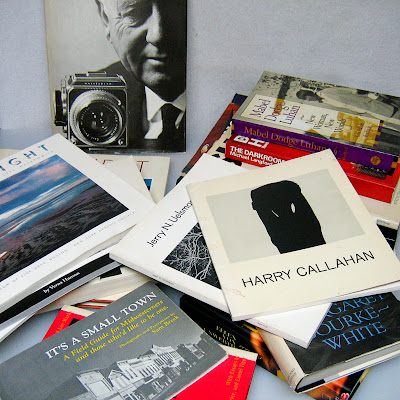 I have already enjoyed the Harry Callahan monograph. There ought to be many hours of fun ahead.

Posted by mfophotos at 6:03 PM No comments: 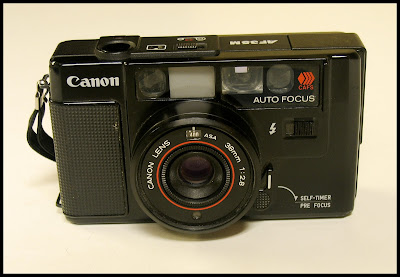 A few posts ago, I reviewed the Nikon One-Touch, a very capable 35mm 2.8 AF camera that is still a pretty decent model to carry along. This post is about the Canon equivalent, the AF35M. The AF35M was Canon's first autofocus compact camera, and was introduced in 1979. The AF35M (also called the Sure Shot later on) features:
38mm f/2.8 lens
CdS photocell on front of lens assembly
ISO 25-400 setting around lens
auto-film transport and rewind
integral pop-up flash
48mm filter ring
active AF system using IR-emitting diode

I picked the camera for a few dollars at the Ann Arbor Recycle/Reuse Center, and it also came with an add-on telephoto lens that I have not tried out. I popped in two new AA batteries, and the camera worked right off the bat. My first impression of this camera was that it was a bit larger than the Nikon One-Touch, and the film advance is noisier. I liked the fact that it has a separate lens cap and accepts 48mm filters - a common Canon thread. However, rather than trying to find a 48mm filter, simply buy a 48-49mm step-up ring and you can use the more commonly sized filters. Since the exposure photocell is inside the lens ring, it will automatically expose and compensate for whatever filter you put in front of it. I did not try any filters for the first roll of film I ran through it.
Okay, what about the photos?

I shot a roll of Ilford XP-2 in the AF35M, and carried it around with me for about a week. It's certainly not a bad street camera, though it is a tad noisy advancing the film. I took the camera downtown, around campus, and to Toledo. The images shown here are from the Walgreen scans. 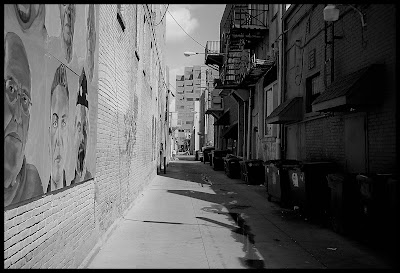 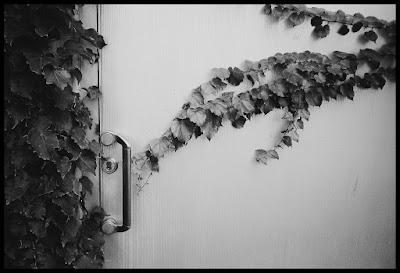 Reaching for the door. 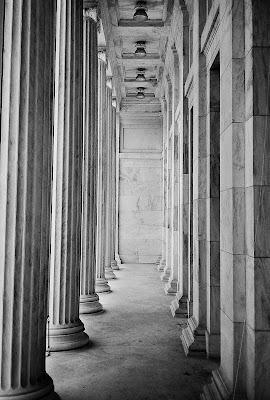 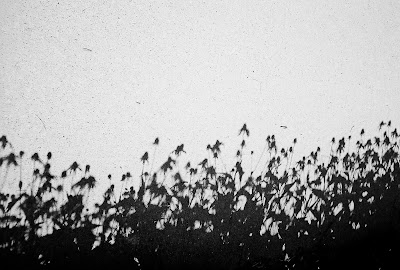 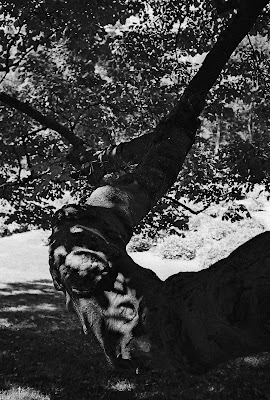 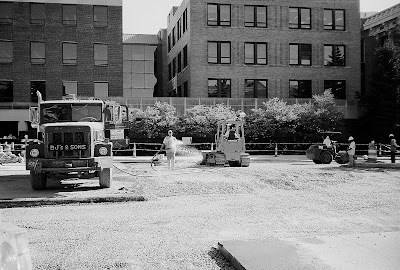 
The AF in the camera works quickly and accurately, and and most of the shots I took were properly exposed. My favorite shots on the roll were those of the columns of the Toledo Museum of Art. Although it's hard to tell from the small images, sharpness was excellent, and though the lens is a bit less wide than the Nikon One-Touch, it certainly is suitable for street photography. One drawback is that the maximum ISO is only 400. That's a limitation for anyone wanting to shoot in low-light without flash. The Nikon One-Touch will read the DX code up to 1600 ISO film.

Final analysis -- The Canon AF35M isn't a great camera, nor is it a bad one. Not as light nor as capable for low-light situations as the Nikon One-Touch, it does offer the ability to use screw-on filters and accessory lenses, which the Nikon does not. Just a tad noisy, and heavy, it was the first generation of AF 35mm compacts, which became more refined, with the culmination of the Olympus Epic Infinity in the early 1990s. (A future post). The push for the manufacturers to produce small cameras with zooms might have been appealing to many snapshooters, but I think a single focal-length AF camera is the best. They are fast, easily focused, and ready in a moment to shoot. Perfect for candids and street photos. While this Canon model might not quite match the equivalent Nikon in all aspects, it is a notch above the slow zoom cameras that later followed. If you can find a working model for a few bucks, go for it!

Posted by mfophotos at 8:58 AM No comments: