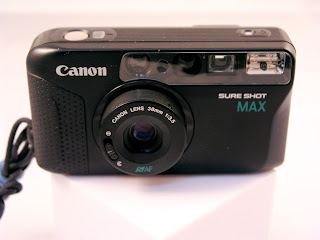 This plastic-bodied, slim point and shoot from Canon appeared in 1991. Called the Autoboy Mini in Japan, and Prima 5 in Europe, it is a pretty sensible camera that does not try to do too much.  With its 38mm f/3.5 lens, the Sure Shot Max is a compact AF camera that fits in a jacket pocket and can be ready for photography almost immediately.  It has one odd little feature - you turn the camera on with the switch located on the lens bezel.  With the lens retracted into the body, it sure does have a thin profile.

My overall impression while using this camera is that it works pretty well as a walk-around camera.  I shot a roll of Kodak Tri-X over the course of a week, and found it was easiest to leave the camera on while in my jacket pocket, which means its ready to shoot.  One thing in its favor is the fixed focal length, which not only makes the camera lighter, but also more nimble.  There are a lot of P&S cameras out there that lack some of the features of this Sure Shot Max, and definitely many that surpass it, but I think Sure-Shot means just that.  It was a relatively cheap snapshot camera (okay, I paid 50 cents for this one) that is going to get an image in most situations.  I have not yet tried it with any color film, but it looks like it will get a spot in one of my camera bags to shoot with again.

Here are some sample images from lunch-hour walks around town: 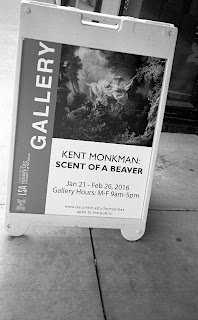 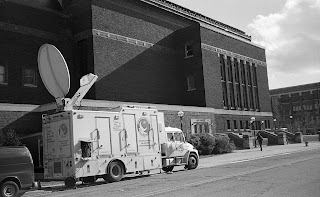 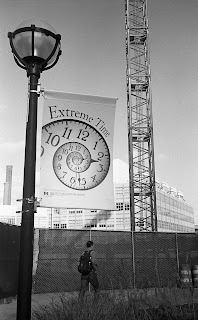 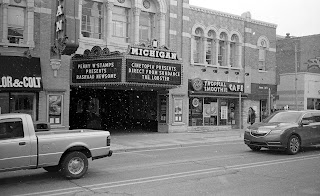 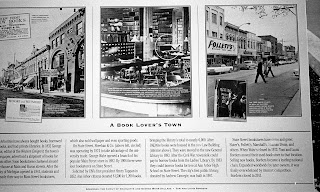 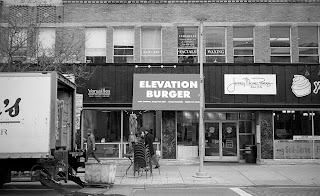 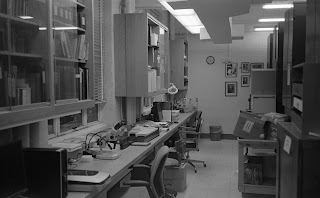 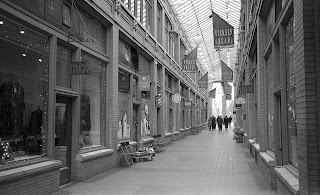 The Argoflex E and 120 film

Argus (located right here in Ann Arbor, MI) started producing a twins lens reflex camera before WWII, and the first model was the Argoflex E (1940-42).   It is a Bakelite-bodied camera with gear-coupled taking and viewing lenses, and actually very similar to  the Voigtlander Focusing Brilliant TLR.  The Argoflex E can use 620 and 120 film in the pre-war model, which can be easily distinguished from the post-war version by the presence of a small spindle knob on the upper left side of the earlier camera.  The post-war  version merely has a circular piece of trim in the same spot.   Film is wound with the advance knob on the right side, and you look through the red window (which has a turnable shield) to watch the film advance. 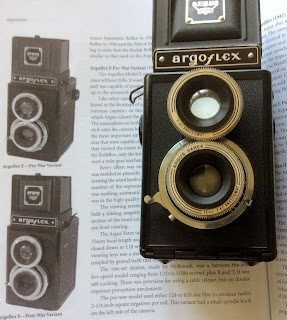 The Argoflex E has a 75mm f/4.5 Varex Anastigmat lens (uncoated in pre-war version).  The shutter speeds are 1/10 – 1/200, sec, plus B and T.  Apertures range from f/4.5-f/18.  There is a place to screw in a remote release on the rim of the shutter housing.    The viewing lens features a depth of field scale that you can view from above.

The post-war Argoflex E (1946-1948) can also use 120 film, contrary to Henry Gambino's assertion in Argomania. Of course, with Argus always tweaking things, it's possible that some cameras made later in the cycle do not accept 120 in the supply side of the camera.  The post-war Argoflex E also has a coated lens, which should help with flare.

The Argoflex E does not have double-exposure prevention, so it can be used to make multiple exposures.  For some, that may make it a very ideal TLR. 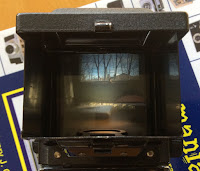 What about other Argoflex models?
After Argus shelved  the Argoflex II and replaced it with the Argoflex EM (1948) and EF (1948-1951), these metal-bodied cameras took only 620 film, and 120 film spools cannot be used in them.

The later Argoflexes do not have coupled taking and viewing lenses, and except for the Argus Super 75 and the Argus 40, do not have adjustments except for “Instant” and “Time.”  None of these models can use 120 film rolls.

So, the Argoflex E is certainly still a usable camera, and since it readily accepts 120 film, it's worth a try.  Some things to look for and to be aware of, though.  Number one is the reflex mirror, which is now  over 70 years old, and may be de-silvering or corroded, or just very dusty, depending on where the camera was kept all this time.  In other words, the image in the viewfinder will not be as bright as that of a Rollei or a Yashicamat.   The shutters appear to be fairly dependable, but remember that these are old cameras, so they could be sluggish.  The lenses may also need cleaning if they are hazy.  In addition, the lack of coated lenses will probably give you less-contrast in the image. One remedy would be to find a UV filter that can slip in place over the taking lens (there is no threaded filter ring). The Argoflex E is certainly as better camera than the Kodak reflex cameras, all of which require 620 film.

Should you buy one?  I would say it depends on the condition of the camera and of course, the price.  While not as complex or as well engineered as cameras from the 50s - 70s, it can  produce sharp images when stopped down.  Depending on the lens condition, wide-open quality will vary.  The reflex mirror's age will also produce a dimmer image in the viewfinder, but using the pop-up magnifier may help with focus.  I would not pay more than $40 for one.

On  February 6, the A3C3 met up at Matthaei Botanical gardens.  I shot a roll of Ilford Delta 100 in the Argoflex E, and developed it in D76, 1:1.   Overall, my light-meter estimation worked pretty well, and the images came out better than expected. Here are a few. 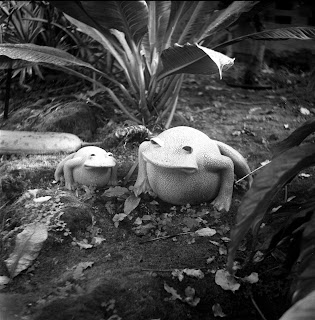 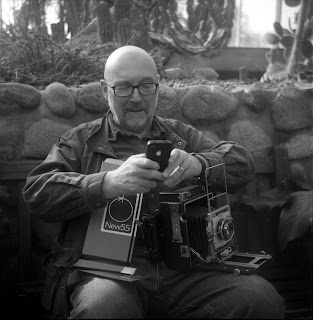 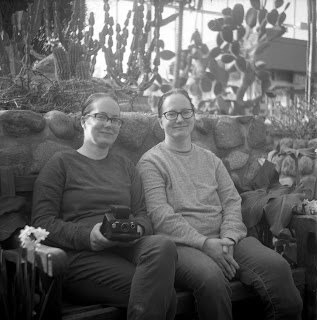 During the transition from film to digital, many different manufacturers produced some very full-featured small point and shoot 35mm cameras.  Nikon's line of One Touch cameras, begun in the early 1980s, continued  with the One Touch Zoom 90s in 2002.  This compact P&S features: 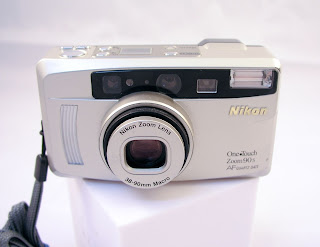 The plastic-bodied camera in the same sort of champagne-aluminum finish as the Nikon N60 and some other consumer models, is lightweight, attractive, and has enough features for the snapshot shooter.  From Nikon's press release in 2002:

"Not only does it feature a new slightly thinner, lighter look -- the One•Touch Zoom 90s gives basic zoom picture-taking an extra touch of creativity and flexibility, Nikon style. The 2.4x zoom lens lets users frame subjects with ease within a 38-90mm range. Versatile flash accommodates most shooting conditions. Macro mode allows shooting as close as 30cm (12 in.) from the subject. Fully automatic operation makes it especially easy not to miss a photo opportunity, so everyone can enjoy taking pictures more."

That pretty much summarizes the camera's features and market.    From the Nikon site, here are the specifications:
So, the obvious question is, how well does this camera perform?  It does fit comfortably in a jacket pocket, and I found it easiest to set it at the widest setting of 38mm and lock the infinity setting, which makes it more usable as a sort of street camera.  I did not try the macro setting, but when the macro button is depressed, it blinks to let you know, and the flash goes off every time you shoot.

I loaded a roll of Agfa Vista 200 (made by Fuji) and took the camera with me to the Toledo Museum of Art last weekend.  I developed the film in a Unicolor 3-step C-41 kit.  Overall I think the images are pretty good. Not as sharp as I would like, but I have no idea what aperture the camera uses, since it's all auto. 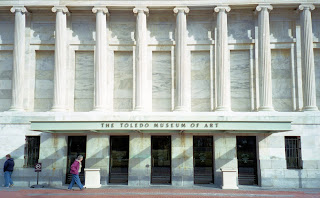 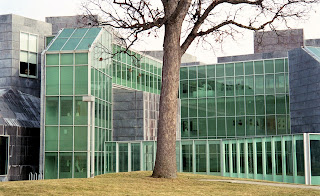 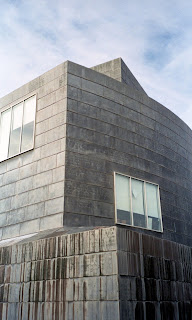 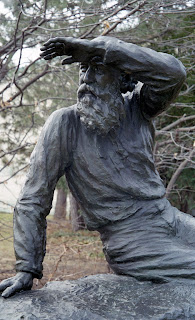 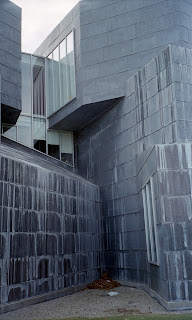 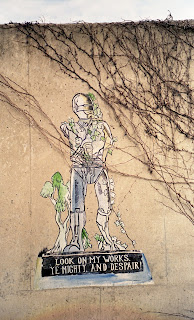 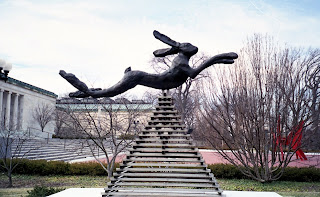 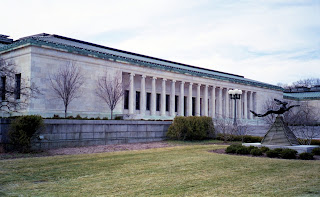 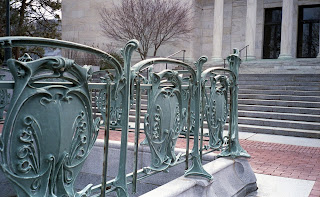 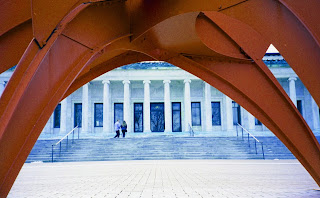 Overall, I could not find too much to find fault with.  It's a medium-range camera that will give good results, and obviously, the more experienced photographer will find ways to make the best use of the various modes.  The downside is the limited ISO range of 100-800, as well as the top shutter speed of 1/250 sec.  However, considering that I paid 50 cents for it, it was money well-spent. Now, imagine if that was a digicam from 2002 - it would have been about 2.1 MP -- and you would be kicking yourself for not using film at the time.

Posted by mfophotos at 9:54 AM No comments: 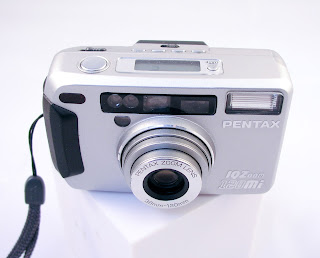 Last month I picked up a bunch of P&S 35mm cameras for Less than a buck apiece.  In the late 1990s and early 2000s various manufacturers were trying to woo customers with P&S cameras that were ever smaller, and contained more advanced technology.  Some of the APS cameras  at the time had very sophisticated electronics as a prelude to the digital onslaught, and most of those features and compactness made it over to the 35mm world.  First of all, you can pack an amazing amount of advanced features on integrated chips, but you still need room for the film cassette, winding motors, and the lens.   Short-range zooms such as 35-80mm were the typical focal length in many of the 35mm P&S cameras.  However, Pentax produced the IQZoom 120Mi, with a zoom range of 38-120mm.  This camera ranks as one of the more compact models, and despite the zoom range is surprisingly svelte.  It has a metal body, and reminds me a bit of the Rollei Prego models that were out at the time. The size is 4.1"L x 2.5" H x 1.7"D, and weighs about 8 ounces. It definitely feels like a metal camera.

The 40-page manual is a necessity, if you want to know about all of the features and modes that this camera has available.  Fortunately, the camera came in the original box with manual and looks like it had never been used. It requites a 3V CR-2 battery (buy them in bulk online!) and the well-marked off/on switch opens the lens cover and the lens extends slightly from the body when you turn on the camera.  There is an adjustable diopter in the viewfinder, which ia quite nice to have.  Four small buttons across the top deck below the LCD control the flash, exposures modes, remote and self-timer, and AF focus.  You can actually set it to infinity for faster street shooting.  There is a button to turn on the date/time imprinting.

Auto DX-coding from 25-3200 ISO, and if you load a film cartridge without DX coding, the ISO is automatically set to 25.

The shutter can be set to B mode, and will stay open as long as you depress the shutter.  You can also have the flash go off in B mode for interesting effects.  There are other shutter speed modes, such as Slow shutter speed with flash off, and Slow-speed Flash Sync.  Red-eye reduction can be turned on.

With any of these compact P&S zooms, the electronic zoom is fairly slow to extend to 120mm and retract to 38mm.  If this camera had only a 35mm 2.8 lens, it would be a work of art.   The max aperture is f/4.8 at 35mm and f/12.5 at 120mm.  So, yes, fast film is a must if you are going to be zooming out. An added bonus is the bottom switch that can turn on the Panorama mask, which is actually fun to use.  Make sure you deselect that mode if you want to short the entire frame.

When new, these cameras were about $200.  This looks very much like a digicam from the front and top.   It fits easily into a pocket, and

I shot a roll of Kodak Tri-X, and I think the results were quite good.  Most of the shots were taken at 38mm. 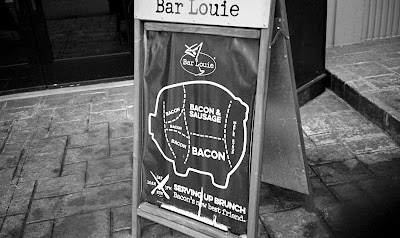 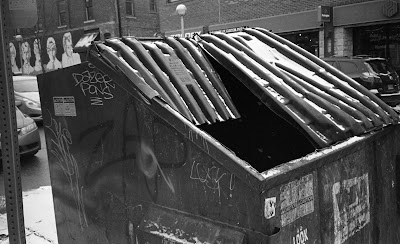