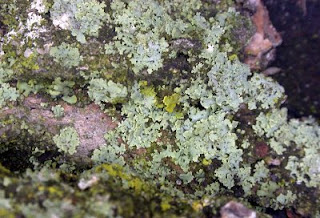 On the way into work this morning, I saw a chunk of bark on the sidewalk.   I picked up the bark after seeing all the lichen growing on it, and brought it into my office.  I shot a bunch of photos with the Nikon Coolpix 995 that I keep there for most close-up work that I need to do.  I love the way that lichens look like another world, and they certainly are ancient lineages of plant/fungi associations.  In this instance, I like the way that a 2x3 inch piece of bark can look like an aerial photograph of a landscape.  A small world, indeed.
That is one of the lessons from macrophotography.  There is no such thing as "ordinary."  The piece of bark with lichens, the small plants in your garden, the drops of water on a leaf... they all attain a grander stature under the lens.

The Olympus Stylus Epic -- Photography in Your Pocket 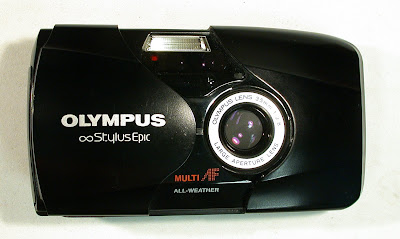 There are some cameras that have many devotees. Take the renowned Olympus XA series, which I reviewed earlier. Those small 35mm cameras are proof that a small 35mm camera with a bit of automation, good design and excellent optics will provide one with a serious picture-taker. The XA series were eventually replaced with a more modern, sleek and automated Olympus Stylus Epic. The streamlined Epic, with its 35mm 2.8 lens is a far cry from the general run of small-aperture p&s cameras from the 1990s-2000s. Because of the built-in flash, DX-coding, autowind, and autofocus, the Stylus Epic is a very complete little camera. I recall reading several times in Popular Photography that it was the camera that "pros" kept in their bags when an SLR wasn't going to be able to be used. So, I guess that makes it a pocket pro camera.


The only problem I have is that the default on the Stylus Epic is to have the flash activated. So, before shooting, you have to press the flash button twice to deactivate it to keep it from going off. Pretty embarrassing if flash photography isn't permitted at the location, and most of the time flash isn't needed. Other than that, the camera autofocuses quickly, and is a pleasure to use. I keep mine handy in my messenger bag, where it sits in a pocket probably designed for a cell phone. I like the security of the sliding lens cover, and the single focal length of 35mm is really ideal for me. Really, it is a camera capable of being used for serious street photography -- without looking serious. 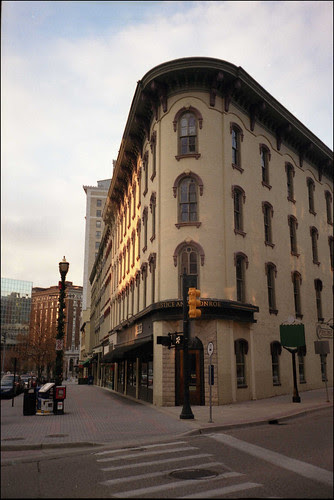 Ann Arbor, May 2009. This photo has a 3-D quality to it when viewed in the largest size.

The Holga 135BC does not disappoint.

I have been shooting with my 35mm Holga quite a bit, and developed a roll of Plus-X that I recently finished up. I love the simplicity and flexibility of the camera, and the time exposure that I took in the UM Museum of Art illustrates how cool it is having a B setting. 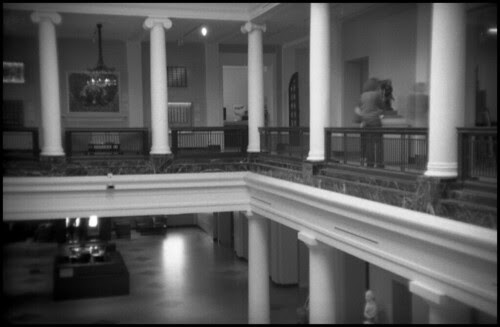 That was about a 4-second exposure, as I held the shutter open by hand, with the camera sitting on a railing.

Stay tuned for more to come.
Posted by mfophotos at 11:31 PM 1 comment: