Huron Camera is no more.  The last brick and mortar camera store in Washtenaw County, Michigan,  closed its doors for good on Tuesday, Dec. 30.  For those of us that freqented the store, it's like losing an old friend.  An old friend that has been on life support and slips away, quietly, into the night.
The store's spot right on Main Street for the past 40+ years was an invitation to come and browse.  I know that I first visited the store around 2000.  During the 1990s and into 2002, Huron Camera also had satellite stores in Saline, Battle Creek, and Jackson, MI.  I also saw their extensive sales tables at area camera swaps into 2003 or so.  The store had a good reputation for camera repairs, and of course, the one thing most people noticed was the large stock of used cameras and accessories in the glass cases.  Prior to the deluge of digital, Huron Camera was the place to go for many things.  At one time, the Ann Arbor area had at least  7 stores that catered to photographers.  Around 2004, there were but 4.   I have previously written the obituary for Big George's, which closed its doors in 2008.  Ritz Camera closed in 2008, Adray Camera in 2006, and Dave's Photo Emporium (formerly Studio Center Photographic) closed in 2005.   All of the above stores had different reasons for closing,  and Big George's was especially a huge loss to the local photographic community.  That left only Huron Camera as the sole place to locally buy photographic supplies.  Therefore, we film users went to Huron Camera.  It was a 20 minute drive from my house if I took the expressway.  Okay, note that I said "film users." 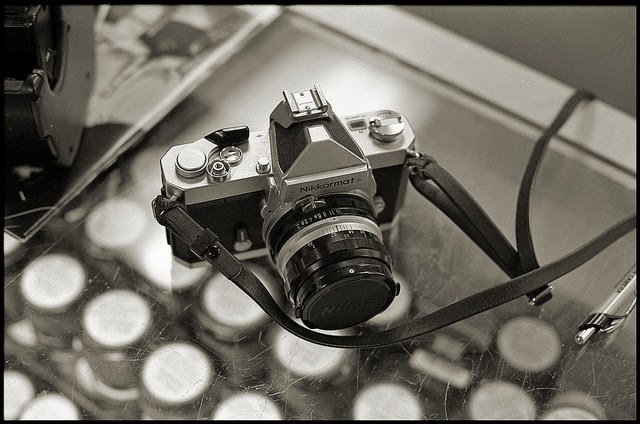 The digital onslaught was in full force by 2007.  Not just the impact of digital cameras, but the online retailers were eating the business from the brick and mortar stores.  Now, if you are purely shopping based on price, you are most likely to buy a new camera or lens online because yes, it is generally cheaper.  The selection is also likely to be better.  However, nobody at Amazon or B&H will be there to answer a question for you on your new camera... or your old one, for that matter.  There lies part of the value of brick and mortar stores.  Not big chains like Best Buy, either.  Locally-owned stores that have staff that can answer a question.  Smaller independent stores do not have the purchase power of the big chains from the warehouses, can't share as well in manufacturer sales promotions, and can't stock new items in quantity or have every model available.  It's just impossible from a business  perspective, especially in a small town.  The old "we can order it for you" may work for some, and it did, but for the younger, more internet-savvy, it is well, "I can order it myself."  So, like  the aperture on a lens, the opportunities for stores like Huron Camera went from f/1.4 to f/8 in the span of a few years.  What else happened in 2008?  The largest economic crash since the depression.   So, the downturn really hurt the smaller stores harder. I will leave the autopsy of Huron Camera for someone else to analyze.   I want to  talk about the store and its people, and what it meant to me. 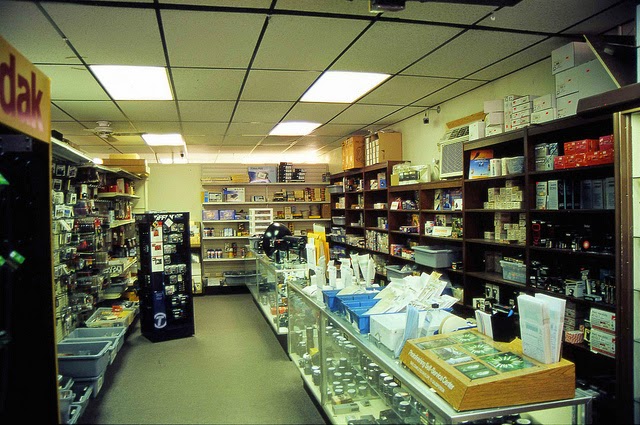 Back in 2001, I was teaching 4-H kids about photography, and I called Huron Camera to see if I could get some expired film for the children to use in the projects.  Not only did we get expired film, we got a lot of it, and of course, it was all still fresh by my standards.  It really helped the kids out, and I never forgot the store's generosity.    My daughter Jorie and I occasionally drove out to Dexter on photo jaunts and I think we went in there in 2000 for the first time.  The bins in the back were the place to look for "treasures" and in those years, we were looking for Argus cameras and accessories, and Huron always had them.  I don't care how much ebay finds you get, nothing beats handling an item, or combing through a bin of "stuff" and finding something special.  It's that moment when the blood rushes to your head and the money flies from your wallet and your new-found prize comes home with you.  That's what made those forays to Huron Camera fun. 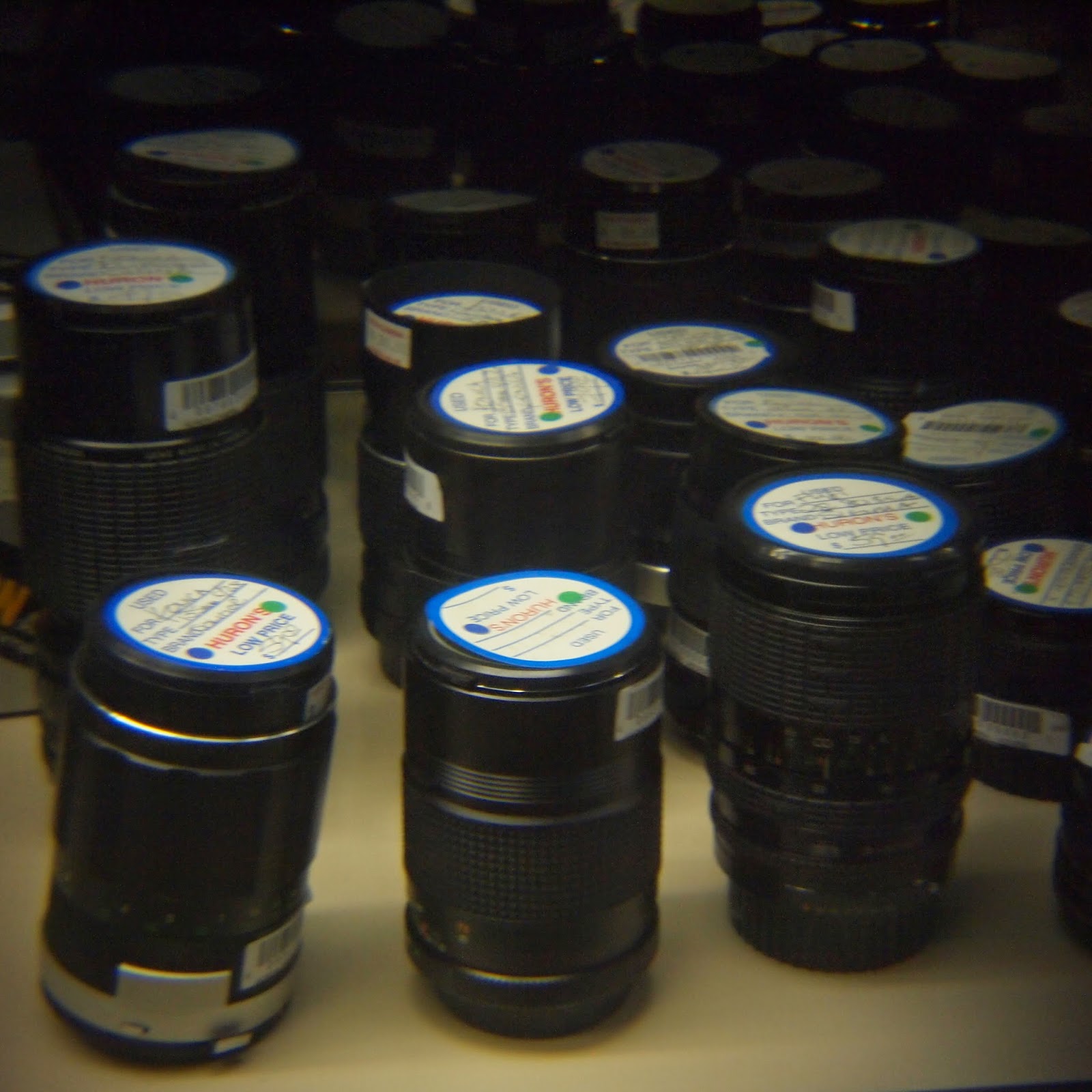 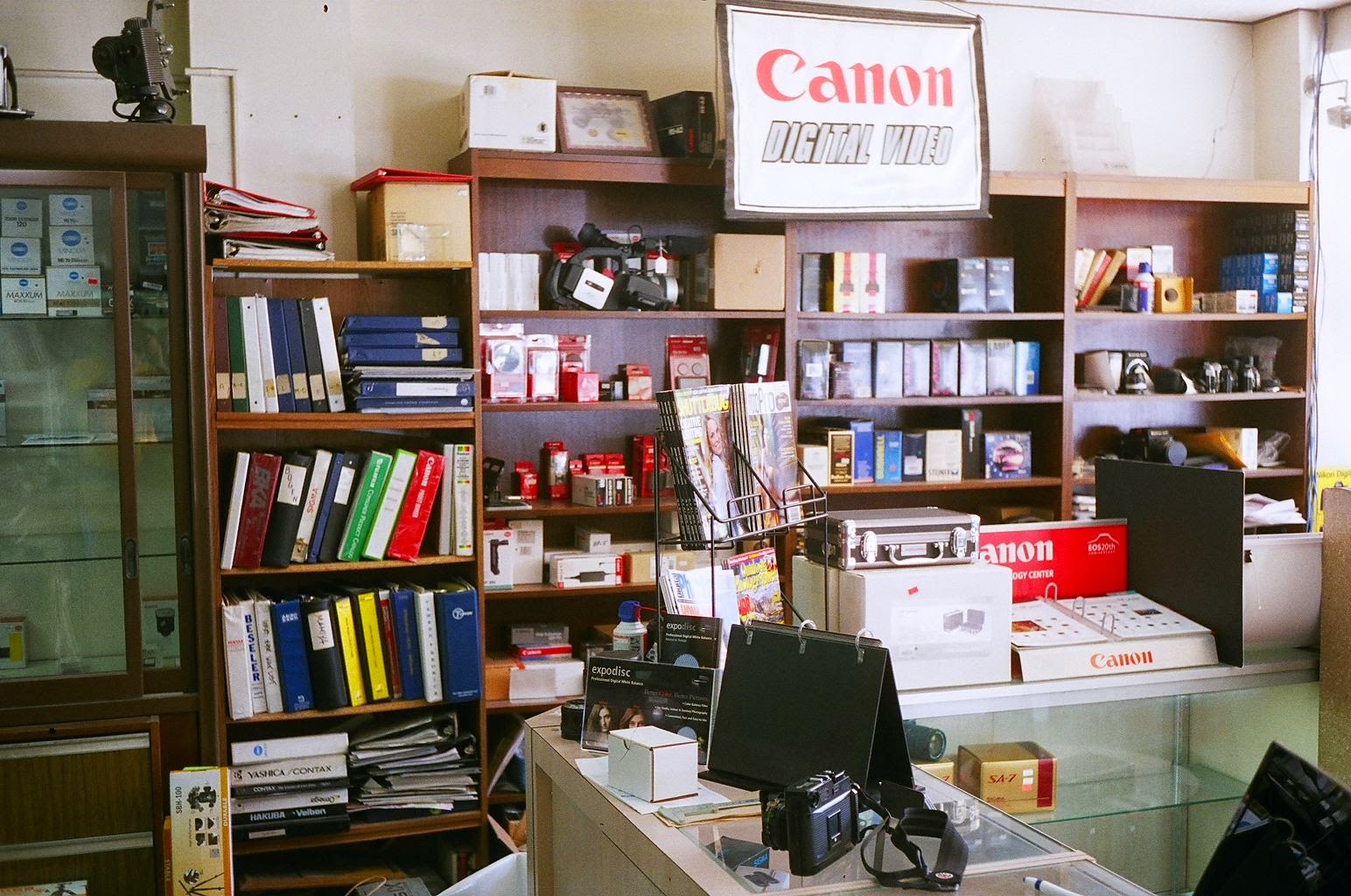 If you were a long-time customer of Huron Camera, you undoubtedly remember when Milt Cambell ran the store and Eason, one of the salesmen that was usually there. My friend Bill Brudon told me to hold onto your wallet, because Eason was slick and would try and sell you something expensive and make you think that you were getting a deal.   I know I was not the first nor the last potential customer that the guy tried his "charm" on.    However, it was a game, and I know I came away with some buys later on that I knew were good deals in MY favor.   There is no doubt that the people that worked there loved photography and knew their stuff, and the personalities of the people there were part of the atmosphere.

Until very recently, Huron Camera was the place to go for darkroom chemicals, and I know I spent some $$ there for developer and fixer.  Once Big George's closed, Huron Camera was IT locally.  They usually did a great job with C-41 film processing, and it was the last local lab that could process 120 film.   Sometimes I would pop in on a Saturday morning, and my film would be ready by lunchtime.  My buddy Marc Akemann and I often met at the store on a Saturday, and then went next door to Joe and Rosie's cafe for coffee and a bite to eat, sometimes talking for a couple of hours.  I'll miss those mornings, and the excuse to go to Dexter.


When the store changed ownership (2006?), I was in part, pleased that it didn't close right then, and also wondered about the future.  I made new friends, as Cheryl and George were often there working the counter, and Mike was in the film lab.   George is as knowledgeable a camera person as I know.  I don't think I was ever able to stump him with a question.  If anyone called or came to the  store with questions, he was the one there that could always give an answer.    All three are good photographers,  good people, and fun to be around.   In the end, I think about the people and the connections that were made there, and in my fantasy world of camera stores, there are elements of Huron Camera playing a big part.  I'll miss the place, and  like it or not, the place had character, charm, and its loss will be felt as one less gathering place for people with shared interests.


Thanks to all the people that made Huron Camera a special place. Good luck with whatever endeavors that follow.

Many years ago, when I was using K-mount cameras, I had a Ricoh KR-5 that I used in addition to my Pentax MG.  It was a robust camera that was not especially feature-rich, but it served its purpose.  I know that I purchased it on ebay and probably paid something like $40 for it.  That was before the digital deluge.
More recently, I have been buying a few Sears and  Ricoh SLRs.  All of the K-series Sears SLR cameras were made by Ricoh, and were certainly a good value for the time, and are still to be recommended if you want a K-mount SLR.  The Ricoh-branded versions are also good, of course, and compared with bodies made by Pentax of the same period, are, in my opinion, better cameras.
Take the Sears KSX, above.  It features manual and aperture-priority exposure with match-needle. +/- 2 stops exposure compensation by full stops, ISO 12-3200 film setting, X sync of 1/125 sec., shutter speeds of B, 4sec - 1/1000 sec.   I think it is the equivalent of the Ricoh KR-10. The KR-10 was a popular camera and sold well in the 1980-82 time frame.

The Sears KSX Super is the equivalent of a Ricoh KR-10X (Not the KR-10 as described elsewhere online).  It features a lock setting on the shutter speed dial, surrounding a flush-mounted shutter release, A and M modes, with shutter speeds ranging from B, and 16 sec to 1/1000 sec.  A self-timer switch is to the L of the prism on the top deck. Exposure compensation dial is +/- 2 stops in 1/3 stop increments. A PC socket for strobes is also located on the front of the camera.

My latest purchase, the Ricoh XR-7 is very similar to the KSX Super, but also features a multiple exposure button on the back  of the camera, depth of field preview button, an AE lock button, as well as a meter switch button on the front.  That's pretty full-featured, and I paid 9.99 for it.

So, what does all this mean?  Basically, the Ricoh /Sears k-mount bodies are a bargain, and perform well, and while the Pentax logo may have more branding power, the Ricoh bodies often have more features and are better-made.  I have seen several K1000 cameras with de-silvered mirrors and wonky electronics in the Pentax ME and ME super.  You can frequently buy a Sears KSX or a Ricoh for less than a large pizza, including the lens.  They make great cameras for those wanting to use film in a reliable 35mm body.  All of the models take current silver-oxide or alkaline button cells, so no worry about that.  Based on my experience, I rate them a "best buy" and highly recommend them for the shooters out there. there are no lack of K-mount lenses from Pentax, Ricoh, Sigma, Tamron, Tokina, and a host of other no-name brands.  If you need a manual, be sure to check out Mike Butkus' camera manuals site, and be sure to pay for his hard work.

I am way behind in developing and scanning in the negatives, so be sure to check my Flickr pages.