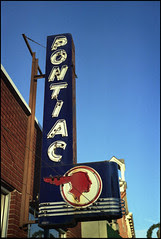 Ever since Big George's shut down their film lab, I have been shooting a lot less color with my medium-format cameras, whether Diana or Hasselblad. It's a shame, because even though I do shoot a lot of monochrome images, there are times when color is the better option. I put off developing a bunch of 120 film until last week, when I dropped off a bunch of rolls at Huron camera in Dexter. Some of the rolls were pretty recent, and one camera had been working through a roll of color 620 -- my Kodak Medalist II. It makes no sense that the camera with the fewest exposures would take the longest to finish up! Anyhow, I am quite pleased with the expired Kodak GB200 that was on a 620 spool. The Medalist II has earned my respect.
This photo is of the old Pontiac dealership sign in Chelsea, MI. At 1200 dpi scan from my Epson scanner, there is a lot of detail there... 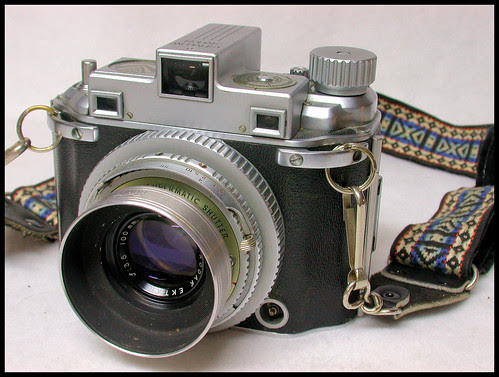 Posted by mfophotos at 12:28 PM No comments: Today is the eighth Argus Day, Argust 8th. Fittingly, it's on 080808. So, grab your Argus camera and shoot some photos with it.

This is one of my Argus C-4s. Ready to seize the day. Marjorie and I plan on walking around during lunch and do some shooting. She's using a C-3.
Previous Argus Days have been fun events. Last year, it was bittersweet, as it was the last time I saw my friend George O'Neal. He passed away a week later. Photography has always been about capturing a moment. Make sure you capture a moment today.

Posted by mfophotos at 10:06 AM No comments: