For those people caliming that the "sky is falling" when it comes to the film industry, I'd like to point out that Kodak has introduced a new color (C-41) film.  Yes, Kodak -- the same company that seems to be bipolar at times - are they a digital or a film company?  They are a photographic company (which is what they need to stress), and it's nice to see them come out with a new film.  Kodak claims that it's the finest-grained color print film, very saturated, easily scanned, and sharp .  It's taken a while to get some -- it was introduced at Photokina in Europe, and has only very recently been available in the US.    I have been looking forward to trying some out, and I ordered 4 rolls from B&H (see link at bottom of the blog page).  I shot one roll last weekend  when I was on a trip to Grand Rapids with four other Crappy Camera Club members to see the Richard Avedon exhibit at the Grand Rapids Art Museum.  I used my Nikon N80 and a 24-120 Nikkor AF-D lens.
Impressions -- First of all, Ektar 100 is a very fine-grained film that is purported to replace the UC-100 film (Ultra Color).  The ISO is 100, but I have seen online posts that indicate one might want to overexpose slightly (set meter to ISO 80).  Second, the film looks a lot more like results from Ektachrome .  Very sharp, contrasty, and saturated.   I took my roll to Ritz Camera yesterday for develop only and scan to CD.   After I opened up the images in Paint Shop Pro (the latest version is Ultimate X2), they seemed to be too contrasty, so I adjusted the curves, and after that, they all looked quite nice.  So, that may be just a matter of the Ritz scanner not yet being calibrated for this film.  However, the color saturation reminds me somewhat of results I have gotten from a LOMO camera.  Not necessarily a bad thing, IMHO.    The photos looked fine.  In fact, they really did remind me of slides that I have shot in the past.  Kodak acknowledges (on their web site) that Ektar 100 may replace E-6 films for users that like the look, but can only get C-41 processing where they live.

The film is also designed to be easier to scan, but I haven't tried scanning it myself as yet.  When I get some time this weekend, I may do that.   Overall, I like the film so far -- it's really so superior to the C-41 films that I typically shoot (Kodak Gold and Fuji Superia), that I may decide it's worth the extra cost for a "pro" C-41 film.    Right now I have another roll in my Olympus RC camera, with the ISO set at 80.  I look forward to seeing more results!
Links to Ektar Information:
I'm encouraged that Kodak is producing new films and improving the technology.  Someone there knows that film still has a future.

Finally -- A book project is finished. 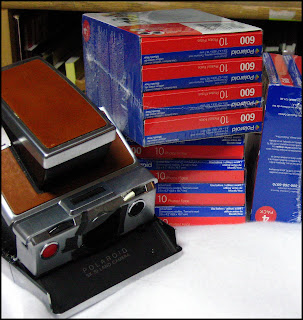 I have had several fits and starts on writing a book on toy camera photography, and while I do plan on finishing it, another project has gone to completion. Recognizing that my work with Polaroids was about done due to the discontinuation of the film, I put together about 80 of my favorite Series 600 and SX-70 produced images into a book.
A Polaroid Elegy - My last year with a Polaroid camera - is now available on Blurb. Culling images to keep the book down to a manageable size and price was the hardest part. It's also the culmination of a year with the SX-70 camera, and one that I wish I had taken to using many years earlier. The paperback and hardcover prices are pretty reasonable, and take a look online. Once I have used up my last few packs of Polaroid 600 film, that's it. No more. I'm reserving the last two packs for a special project, whatever that might be.

Edited: Here are the books, and my now-broken SX-70 camera!

Google and a Life® Time of images

According to various news sources, and the Google Blog page -- Google will host the thousands of images in the Life Magazine archives, making available some of the most poignant and influential photographs of the 20th century.

According to Google - "Only a very small percentage of these images have ever been published. The rest have been sitting in dusty archives in the form of negatives, slides, glass plates, etchings, and prints. We're digitizing them so that everyone can easily experience these fascinating moments in time. Today about 20 percent of the collection is online; during the next few months, we will be adding the entire LIFE archive — about 10 million photos."

Ten million photos. Holy smoke. That's a lot of images. From one archive. I have to hand it to Google -- they think big. Their search engine and image banking ought to reap rewards for researchers and educators. I did a quick search today, and the selection of images brought up under my searches was astounding.

I leave you with this screen capture of my search of "Ansel Adams" -- only one page of 5 pages of results from thee Google-Life archive: 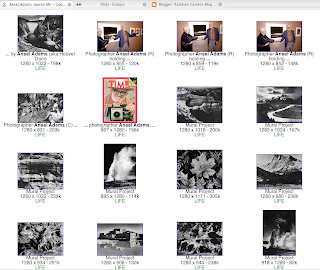 I'm sure that this will get a LOT of use.
Posted by mfophotos at 9:39 AM No comments:

One Subject, Many Possibilities

Those people that know my style of photography are never surprised when I am on a photo shoot - road trip and find me trying to decide which camera(s) to bring along on that particular day. We often hear the refrain "the camera doesn't matter." I beg to differ. The camera matters a lot. Whether I want to shoot with a toy camera, a Nikon SLR, film or digital, 35mm or 120 film, hell -- even a Polaroid, these are all choices that make the final image of any given subject a reflection of the camera and materials used to capture it. Here is a case in point:

Take one exotic vegetable that I have only seen previously on Flickr -- Broccoli Romanesque (actually a cauliflower), which I finally picked up at a local store. Could I capture its interesting quality? Apart from the obvious Fibonacci/Fractal connection, the broccoli head and the leaves surrounding it had great texture and possibilities for a still-life.

So, before we had the vegetable for dinner, I spent an evening photographing it with several different cameras set on a matte black backdrop and used one incandescent light for the light source.

Shot with the Nikon D70s and the 60mm macro lens:

Using my Canon Powershot, and shooting in manual b&w mode:

Obviously, each camera helped me create different images. I love the Polaroid image and the Hasselblad shot is very nice. So, I think this shows that the camera does make a difference, as does the person using it. Maybe the next test is to take the same camera, same subject, same set, and let a few different photographers shoot. Could be an interesting exercise!
Posted by mfophotos at 12:39 PM 1 comment:

Kodalith Fun at Quincy Mine 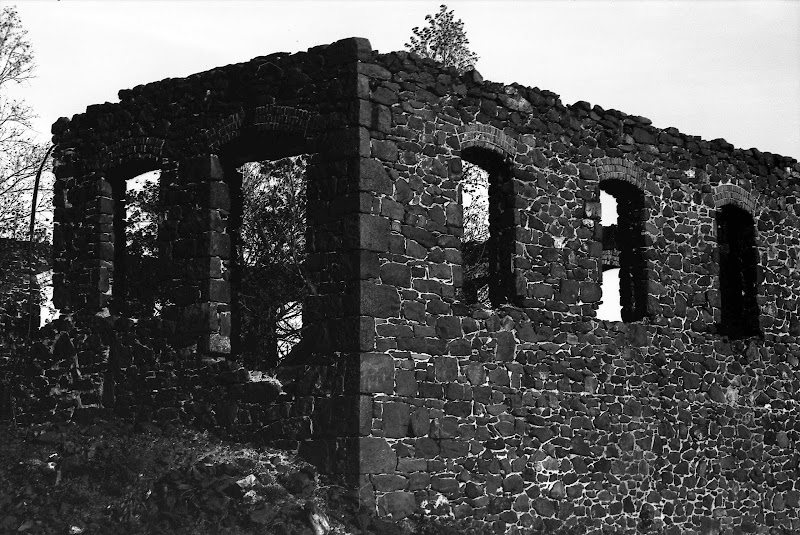 While I was at the Quincy Mine near Houghton a few weeks ago, I shot one roll of Kodalith (ISO 12) film -- and knew that I would get some nice contrasty images, as it isn't normally used as a pictorial film. In typical usage, one develops Kodalith in a high-contrast A/B lith developer for pure b&w with no gray. However, there are some tricks to allow its use as a pictorial (gray-tones) film. I have used Diafine in the past, and got pretty decent results, but in this case I developed under red safelight by inspection in Dektol (1:8) for about 3.5 minutes. 1:10 might be even better, but I am happy with the stark look I got from these ruins of Quincy Mine. I really like my results, and this is not something you can get digitally, boys and girls.

The raking light at the end of the day really made the shots stand out.
Posted by mfophotos at 12:09 AM No comments: