Think about it
Originally uploaded by mfophotos.

You have heard some pretty nasty things coming out of the mouths of McCain/Palin lately. I keep hearing the word "socialist" applied to Obama's platform. If redistributing the wealth means socialism, then, Palin is one, too. Giving $$ from the oil companies to every Alaskan makes it a socialist state. The US has one of the largest disparities in wealth right now, and the middle class, however you wish to define it, is being squeezed by so many factors. I also hear that "taxes are unpatriotic." Excuse me, talking heads, but taxes pay for all the things that we take for granted. Schools. Fire protection. Clean water. Infrastructure. Don't want any of that? Then I suggest that you move to somewhere like say, the Congo.

Now, our country is faced with two wars, a serious financial crisis, job losses in many industries, unemployment for many, underemployment for many more, and so on. When I saw this cornerstone at the firehouse in L'Anse, MI, it brought home all the things that our country accomplished at the helm of Franklin D. Roosevelt and the "new "deal" democrats.
1. Infrastructure -- how many of us have been to state parks, national parks, traveled over roads, bridges, used city services, drank clean water, enjoyed electricity? That didn't appear overnight, and much of it was the result of WPA programs. The Works Progress Administration built schools, firehouses, county courthouses, city halls, bridges, sidewalks, roads, dams, park facilities, hospitals, and more. It put people to work and much of the infrastructure in rural areas still dates from the WPA.
2. Social Security -- there was never any safety net for working class people unless they worked for some far-sighted company like Eastman Kodak. Social Security changed all that. The rich don't need it, and never did.

So, what we need is to re-energize our country with a modern day version of the WPA. That will only happen under an Obama/Biden administration. Please vote putting your country first. It's the only one we have.

A gem of a show - Accidental Mysteries at NMU

Last weekend Adrienne and I drove up to Marquette to visit our daughter Marjorie, now a junior in the Art & Design School at NMU. We did a lot of driving around and a lot of photography, which I'll discuss in another post. Marjorie told me about the new exhibit at the DeVos Art Museum at NMU, titled "Accidental Mysteries." It's one well-done show on "vernacular photography." Many of the images were very memorable, some quite equal to something we might expect from some famous photographers. However, all of these were shot by unknown photographers from the past, when simple box and folding cameras produced the majority of images by the masses. Some of the images have been digitally enlarged - to stunning effect. The show write-up from NMU states:
"Accidental Mysteries, originally exhibited at the Sheldon Art Galleries in St. Louis, Missouri in 2005, is a unique collection of found photographs collected by John and Teenuh Foster. Over ninety images are on display in the exhibition, selected from a collection of hundreds, found over the years in flea markets, antique shops and auctions."

For collectors of snapshots, the photos presented are real gems. Many exhibited a degree of forethought that separates them from the run-of-the snapshot in an old family album. Well-mounted and displayed, the images in the exhibit were a delight to pore over. I found myself laughing and sometimes amazed at some of the details in the photos that gave me an appreciation for the labor it took to choose the images for the exhibit.


Vernacular photography is an interesting concept from the art world. I'm not sure I can come up with a better term at the moment, but the exhibit, which runs until November 15 is worth seeing if you are going to be anywhere in the Upper Peninsula. Northern Michigan University is a fine school, and the DeVos Art Museum is a gem for sure. The museum has featured a number of excellent exhibits, and though it may be small, the exhibits are wonderfully curated. The Accidental Mysteries exhibit is one that I'd love to see in the Ann Arbor area!

The DeVos Art Museum is open every day, but check their web site for specific times.

A short trip to Marquette this weekend, and hopefully, there will still be some fall color there. I hope to make it over to Hancock and finally photograph the Quincy Mine, which is a pretty damn photogenic place with decayed building and remains of a mining operation.

On another note, I finally developed a few rolls of 35mm left over from the summer. One of them has a series of shots from Pictured Rocks National Lakeshore, and more specifically, Munising Falls:

Shot with my Nikon F3, on APX 100 film. Great uniform light before the sun peeked over the trees, too. I'm becoming a fan of this camera, and more b&w work with nature, especially when the light is like that.
Posted by mfophotos at 1:16 PM 3 comments:

Once again, it's almost time for the annual Michigan Photographic Historical Society's Photographica show at the Novi Community Center. There are usually about 50 tables from vendors, collectors, and exhibitors. For the past several years I have been at the MiPHS sale table, and I'll be there agin this year with more low-priced goodies from books to odd equipment, cameras, lenses, and so forth. You never know what will turn up at this show, so that is why it is always a fun event. I no longer go to the other camera shows, as they have gotten smaller with only a few vendors. The MiPHS show has images, postcards, cameras, books, film, and hardware, so it really does cater to a broader crowd than just camera collectors. 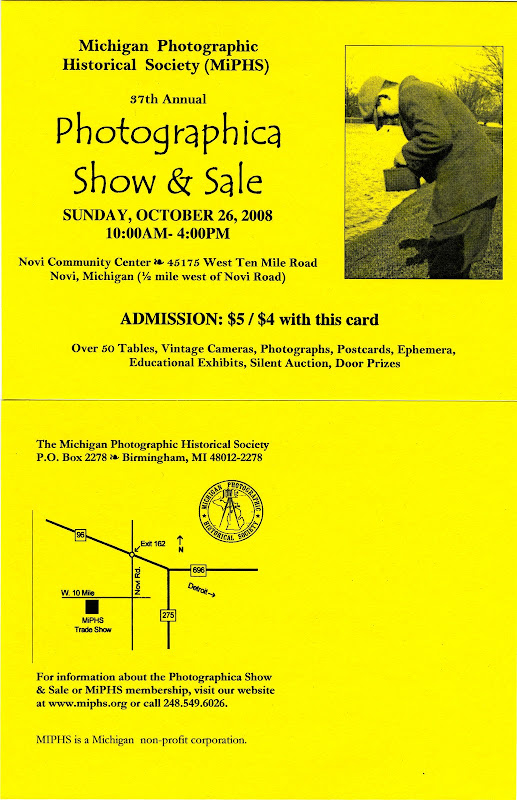 Posted by mfophotos at 9:27 AM No comments:


The University of Michigan's Museum of Art has been operating an off-site gallery (1301 South University, Ann Arbor ) dedicated to photography while the construction of the UMMA addition has closed down the museum. For photography lovers, that has been a wonderful opportunity to see photography-only exhibits that have, for the most part, been well-executed.

The latest exhibit, "The Infinite Landscape: Master Photographers from the UMMA Collection" runs until January 4, 2009, but I would see it as soon as possible, and as many times as possible. Landscape photography is a broad genre, and this exhibit definitely showcases some of its ardent practitioners - Ansel Adams, Paul Caponigro, Brett Weston, William Henry Jackson, Eliot Porter, and Michael Kenna, to name just a few. If one is an Ansel Adams fan, you'll be pleased with the 6 images of his that are shown (the Aspens is my favorite). However, landscape photography IS infinite. Whether one photographs an intimate view of a pond (Nenuphars by Atget) or the enormity of the larger Yosemite Valley (Adams, William Henry Jackson, Carleton Watkins), the "landscape" can be almost anything. I was pleased to see a Calotype from William Henry Fox Talbot - Loch Katrine, as well as an Orotone print from Edward S. Curtis of Canyon de Chelley (an Orotone is a print made on glass with gold pigment painted over the emulsion -- an interesting effect). I don't know how big the UMMA photographic holdings are, but this show certainly has some breadth to it. Although I wasn't especially impressed with the Eliot Porter Cibachrome prints, or the Yellow Umbrella by John Butho, there are plenty of other photographers' works there I did enjoy. I really liked the Two Barns by Minor White - fantastic use of raking light from a setting sun against, well, two barns. Brett Weston's images engaged me, especially the untitled image of succulent plants. Only one image from his father - China Cove, was in the exhibit, and perhaps it's only because the UMMA lacks other Edward Weston landscapes that they did not include more (yes, I'm an unabashed Edward Weston fan). It's hard to say anything negative about Michael Kenna's work - his sublime landscape imagery is a wonderful counterpoint to the stark sharpness of Adams' Monolith in Yosemite. I was also pleased to see some works by Kartesz, Josef Sudek, Karl Struss, Walker Evans, and Peter Henry Emerson. Steichen's Balzac photogravure is perhaps one of the more famous images on display, though perhaps the weakest landscape. There are, it seems, an infinite number of ways to portray a landscape, and although this exhibit runs for several months...it is not infinite, so I suggest that you go and pay a visit.

Posted by mfophotos at 11:32 AM No comments: