“I am not an artist, and I never intended to be one,” he wrote in the 1992 book Cornell Capa: Photographs. “I hope I have made some good photographs, but what I really hope is that I have done some good photo stories with memorable images that make a point, and, perhaps, even make a difference.”

For more information,read the NY Times article. The ICP has a short bio of Cornell Capa on their site.

As a photographer, I would be happy that one photograph of mine makes a difference to someone.
Posted by mfophotos at 8:22 AM No comments:

Last week, my friend Cynthia passed along this cheap "Time-Style" 35mm camera. I realized as I photographed it that is has a Cyan-Magenta-Yellow-Black or CMYK color scheme! Hard to see, but the lens cap reassuringly says "camera.'
I loaded the camera up with some really ancient Tri-X Pan -- from the early 1970s, when it came in 20-exposure rolls. Talk about giving it handicap to start. However, I wanted some real crappiness. And I got it. I developed the film in Diafine, and here are few results from a lunch-hour at work and a few minutes around the house. 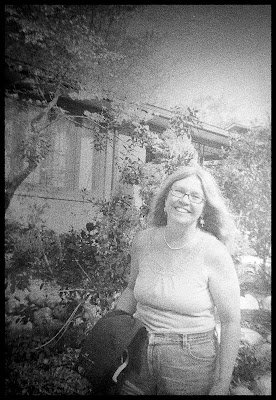 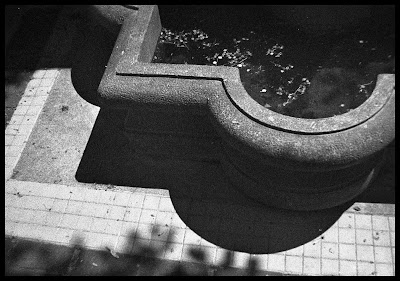 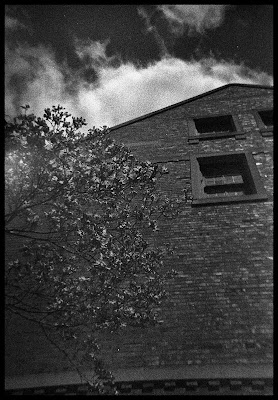 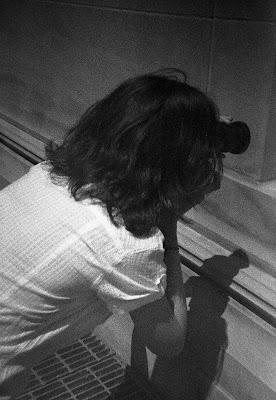 Posted by mfophotos at 9:42 PM No comments:

How many times have you photographed something with one thing in mind, only to discover, much later, that what you shot -- with the thought you had at that moment -- is not the thought you have after seeing the print?

Such is this image. I shot these three soda glasses (OK, Coke glasses) at a local restaurant when a bunch of us Ann Arbor Area Crappy Camera Club members met for dinner after viewing the William Christenberry exhibit at the UMMA Offsite gallery. I was shooting Plus-X with my Pentax ME -- not the best film for indoors, by any means. But, I took this shot because I thought the 3 glasses looked interesting. It wasn't until I saw the negative scan that I thought those three glasses also represented different outlooks on life -- you know the glass half-empty, etc. So that's my title -- Three Views of Life.
Posted by mfophotos at 8:12 PM 1 comment:

Damn It's Still Winter in the Keweenaw!

Or...how to bring a bunch of cameras, and only use one or two.

On May 1, I drove up to Burt Lake so that I could leave early the next morning and help my daughter Marjorie move out of her dorm room at NMU in Marquette. The drive to Burt Lake was uneventful, and I stayed at my friend Joan's cottage for the evening. Joan was there, and it was great talking with her about her recent trip to Alaska. I left bright and early on the 2nd – well not so bright – it was pretty gray and dull outside, not to mention somewhat wet. I was over the Mackinac Bridge and on my way across the Upper Peninsula on US 2 after having a quick breakfast on the road. It hadn't really struck me how much the season had regressed until I was in the UP – spring was definitely a good 3 weeks behind what we are having in Ann Arbor.

The maples were flowering in Mackinac Co.,-- but nothing else. However, their bright red contrasted nicely against the green conifers.
As I travelled across M-28 from Seney to Marquette, I started seeing an occasional remnant snowbank on the sheltered N-facing slopes. I saw more as I passed Munising, and then then only an occasional debris-encrusted snowpile in Marquette. I arrived to a light rain in Marquette, and I helped Marjorie get her Jeep loaded with stuff from her dorm room. By the time we left Marquette for the Keweenaw, it was around 2:30 pm., and we left her Jeep in the lot and drove the Echo. As we drove along 41, the rain picked up, and as some point – about the time we stopped at Lake Michigamme – it began to really pour. Lake Michigamme still had some ice on it, which surprised us. By the time we arrived in Houghton, the rain had pretty much tapered off, and it was cool and windy, and we stopped at the Cyberian Cafe for coffee. It started misting again as we left Houghton, and by the time we arrived in Calumet, it was sort of foggy and drizzling. Ugh. Perhaps the worst kind of weather for taking a out a camera. I was wrong – it would get worse. We managed to get the last room at a motel N of Calumet – where they had raised the rates because of it being MTU graduation weekend. Oh well, it was clean, dry, and warm. We had time to go and do some exploring after that, visiting Gay and Copper City – two little villages off aways from US 41. Yes, it was raining, so we didn't shoot all that much. We then headed back to Calumet and had dinner at the Michigan Inn – which has a beautiful bar and great food.

May 3. Fog. Really pea-soupy type of fog. I had to go find some breakfast and fill the car with gas. Downtown Calumet looked like an eerie otherworld as the church spires dissolved into the fog at 7:30 in the morning. It was misting out, too. I wish I had remembered to bring my raincoat and the umbrella.
We got on the road before 9 am and drove up 41 on the spine of the Keweenaw, and took the road to Lac LaBelle, which lies on the eastern side. It's hard to realize that you are perched well above Lake Superior until you descend to Lac LaBelle. The road slopes quite a bit, and we passed a ski resort on the way, until we arrived at the small village. I'd love to see it on a nice day. We did spot a loon, several common mergansers, and a hooded merganser in the lake. I wonder if waterbirds like sunny days. After Lac LaBelle, we followed the road to Bete Grise which lies right on the Lake Superior shore. That was a beautiful place, even in the misty weather. The trees in Bete Grise were mostly covered in thick hanging strands of lichen, resembling Spanish moss.

We got back onto 41, and the mist and rain picked up as we went N, and so did the snow remaining alongside the road and in the woods. Mo and I were amazed at how much snow was still remaining on the 3 of May! As we got closer to lake Medora, the snow looked to be several feet deep in a few places. Then we saw Lake Medora, and it was still covered in ice. Not a thin skim, mind you, but that thick white opaque ice that was probably quite thick. Oh yeah, did I say it May 3? Not in the Arctic, but the Keweenaw. We managed a few shots there, and were chilled by the wind and fine mist. Finally, we got into Copper Harbor before noon, and drove around a bit, hitting Agate Beach where the Fanny Hooe River empties into Lake Superior. I actually went back to the car and got out the Hasselblad and shot maybe a half-dozen images, until I could no longer feels my hands. We went to the Pines restuarant and had coffee and a dinner-plate-sized cinnamon bun. Sugar and starch is big there. I found out that our waitress moved there with her family from Grand Rapids 5 years ago. I asked her how she liked Copper Harbor. She said, “It sucks.” Nw I know why there are so many bars in the UP

We went back down the Keweenaw on the W side, on Route 26 towards Eagle Harbor. The coastline there is awesome, with rocks jutting out into Lake Superior where they are beaten by the waves. We stopped at a few places slong the way, where I shot some images with my Canon A570 IS pocket digicamn and my Polaroid SX-70. The weather was too crappy for any serious camera work. It was an amazing scene, despite the inclement weather, and perhaps made all the more dynamic because of it. We got some shots in Eagle Harbor where the lighthouse is located, and as we were leaving, it started to snow.

By the time we got into Calumet, the snow was sticking, and accumulating on cold surfaces. Not the May weather I had hoped for. The Quincy Mine photos were out, so we went back to Houghton and then onto Marquette. We stopped at the Father Baraga shrine near Baraga, and it is a rather weird place. The statue of him looks like he's on a cloud supported by spider legs, while he wields a big crucifix and a pair of snowshoes.

We got back to Marquette in mid-afternoon, Marjorie switched over to her Jeep, and then both vehicles continued on toward the cabin across the Mackinaw Bridge. We had a fairly uneventful drive, and arrived at Burt Lake about 9:30. The drive on Sunday back home went pretty quickly, and we were rewarded with real spring as we drove farther south. By the time we arrived in Ann Arbor, I felt like we were in Florida!
Posted by mfophotos at 6:11 PM No comments: