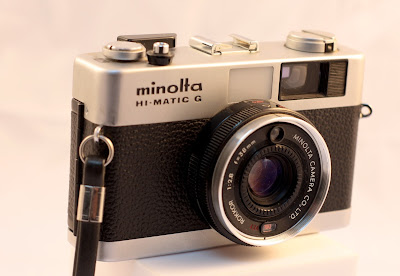 I have a love-hate relationship with those 1970’s 35mm rangefinder and compact zone-focus cameras. Far too many of them to keep track of, and far too many that took Mercury cells or some odd-ball battery that I can’t find, and far too many of them that now, don’t work.  On the plus side, they are usually sturdy little metal boxes, attractive, and easy to use. Over the years, I have had Minolta  RFs land in my lap, and a few, such as a Minolta 7s worked quite well, but I didn’t fall in love with it.  I had a Hi-matic G in 2005, but it had exposure issues.   The worst aspect of the Hi-Matic series (with one exception) is the auto-exposure with no manual capability.  In regards to the Hi-Matic G, it’s not an especially singular camera, and is a middle of the road auto-exposure compact RF camera with a zone/scale focus, with the following features:


The ISO range is a limiting feature, but given the time when these cameras were made, entirely proper for the audience they were being sold to.   Not having a B setting is also limiting.   There is not really much to distinguish it from a slew of other compact 35mm cameras of its time.  The Konica C-35 has similar specs, but has a real rangefinder, not scale focus.  The Sears 35RF is similar. As much as I want to like the Hi-Matic G, the Hi-Matic 7SII (quite different from the 7S!) is the camera of the Hi-Matic series that should be on your list (and eBay prices are high).   The Ricoh 500G is another compact, yet robust RF camera, with reasonable prices on the used market. It too, is fully adjustable in manual mode. The Canonet QL-17 is not much larger, and certainly a better camera than the Hi-Matic G.

I tested the camera with such a S76 cell, and a roll of Svema 100 b&w - my cheap go-to film for testing.  Overall, I feel the camera works well, and it passed the test to be a pocket companion. 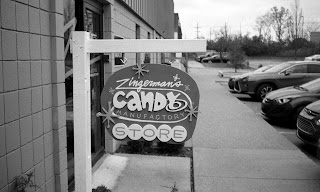 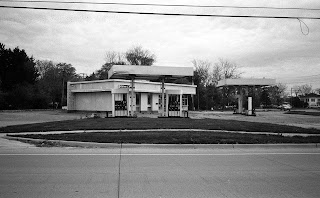 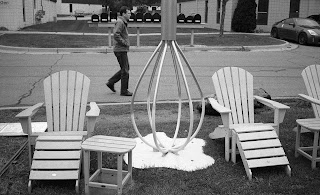 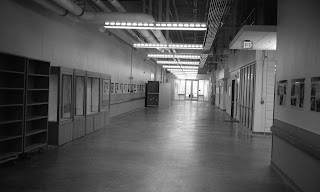 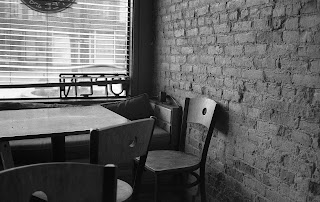 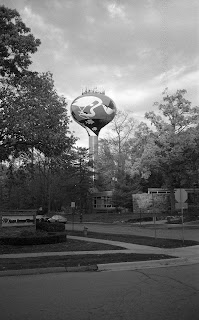 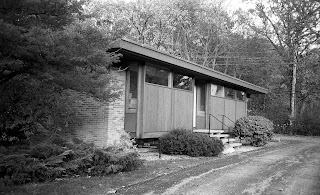 The Bronica SQ-B - A Perfect Square! 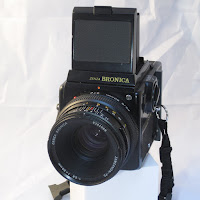 I have owned and used many different cameras over the years, but there was one brand that I had absolutely no experience with, that being Bronica.  Known for their various medium-format cameras, Bronica was a brand that I knew little about. I had heard people say both good and bad things about the cameras, but generally the consensus was that the build was not as good as a Hasselblad.  Last year, in a segment on the Film Photography Project Podcast, we had a discussion about cameras, and I said that there are times that I would like to shoot with a particular camera for a while, but not necessarily own it.  One of the cameras that fit that bill was the Bronica SQ series, which are medium-format SLR cameras with removable backs, square 6x6 image format, and look much like the archetypical Hasselblad.  I didn’t have any interest in the 6x4.5 Bronicas, as I once owned a Mamiya 645E, and that format doesn’t hold as much interest to me. 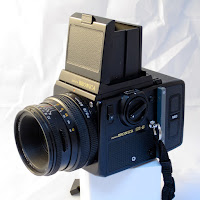 A few weeks after the episode aired, Mike Raso contacted me and told me that one of our listeners wanted to contact me and loan me a Bronica SQ series camera to use for a while.  It turns out that David Lyon, one of our FPP followers in Utah has a Bronica SQ-B that had belonged to his sister, and he thought it would be great if I could put it to use for a while.  Dave and I started corresponding, and back in March I received a lovely Bronica SQ-B in the mail with a waist-level view finder, 120 back, and the normal 80mm 2.8 lens.

The Bronica SQ-B is an all-manual 6x6 SLR with shutter speeds from 8 sec. to 1/500 sec, with flash sync at all speeds.  There is no B mode with the standard 80mm lens. The shutter is an electronically controlled Seiko between - lens leaf shutter, meaning that it requires a single 4LR44 6 volt battery to operate.  There is no metering, so a handheld meter needs to be used.  Multiple exposures are possible, as is mirror-lockup shooting. 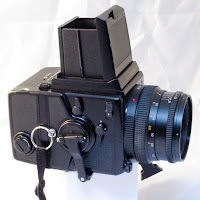 The film back is interchangeable, with backs for 120, 220, and 35mm.  The lens is a Zenzanon -PS/B 80mm f/2.8 standard lens, which focuses from 80 cm to infinity.   The film is advanced via the crank on the right side.  Shutter speeds are controlled by a knob on the left side with a readout that is viewed from above.  The waist level finder (WLF) is bright and a pop-up magnifier is used for critical focusing.  The shutter release button is on the lower right side of the front, and is easy to use.  There is a separate screw-in port for a cable release on the L side of the body.  There are several iterations of SQ models, and the SQ-B appeared in 1996, so it's a relatively recent model.  The B designation may just mean "Basic" as that is what the camera really is - basic. The SQ-Ai is the top model with auto-exposure and TTL flash capability. 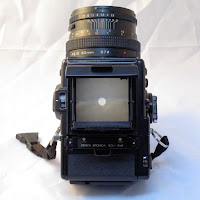 Use of the camera.
My previous experience with 6x6 SLRs was with a Kiev 66, Kowa 6, and Hasselblad 500C.  In all ways, I find the Bronica SQ-B to be a better camera in terms of ease of use, control layout, and ergonomics.  For those days when gloves are needed, the controls are easy to use.  If you have ever tried to use a Hasselblad with gloves on, you’ll appreciate the Bronica.  The dark slide is easy to remove and insert, and the winding crank needs one turn to advance the the film.  Not having a meter was not a problem. I used a Pentax Spotmeter or a Sekonic Twin-mate hand-held meter or sunny-16 while shooting.  That would have been the case had I used the Hasselblad.   The camera balanced nicely in my hands and the WLF worked great.  I found that a Pentax 67 close-up lens on the 80mm lens was really wonderful for close-up portraits.   I carried the Bronica in a shoulder bag with a Nikon SLR and found that the Bronica was not overly heavy in that regard, and it certainly hung fine around my neck with a Tamrac strap.   Some people don’t like WLFs, but for 6x6, I think it’s great.  Of course the image is reversed L-R, but that’s usually only a problem with photographing moving objects.  It’s the same as using a TLR in that regard.  There are prism finders available for the SQ series, but I like the simplicity and unobtrusive nature of the WLF.

Summary of my experience
I don’t know why the Bronica series of cameras have been maligned by some. Perhaps it is just Hasselblad snobbery.  I am a pretty experienced photographer, and have used and handled a LOT of cameras.  I found the controls and layout superior to the 500c I once owned, and my user experience was excellent.  I downloaded a SQ-B manual before attempting to use the camera, and that’s critical for anyone unfamiliar with a new camera.  The controls are simple to use and there are no distractions when using this camera.  The question is — “Should I buy one?”  My answer is a resounding “YES!”    I liked the results that I got from the Bronica, and I have posted a few of my favorites below.    I thank David Lyon for allowing me to use the camera for most of this year.  I find that FPP listeners are great people with a common bond of film photography.   Now, another camera that I would like to try out for a bit is a Horizon! 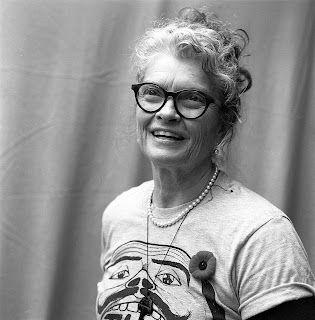 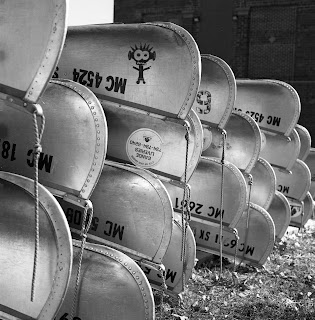 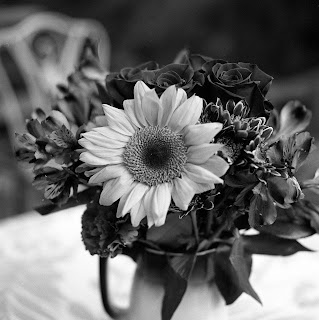 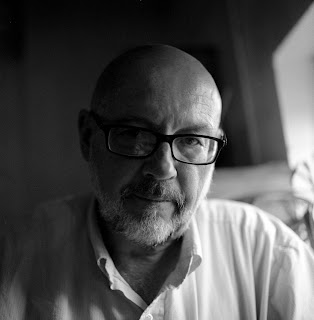 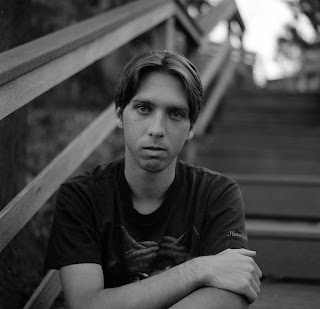 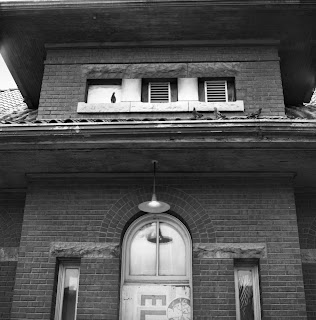 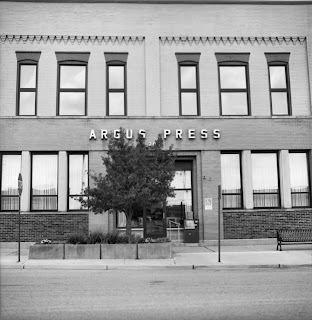 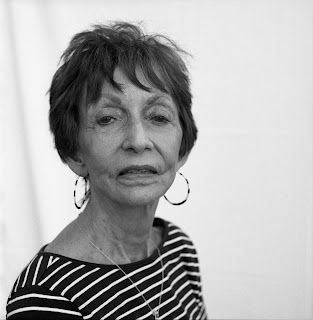 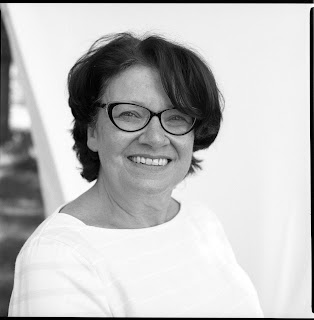 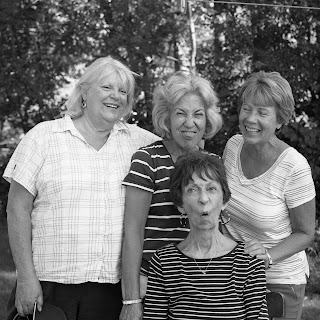 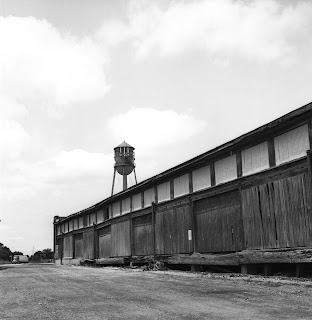 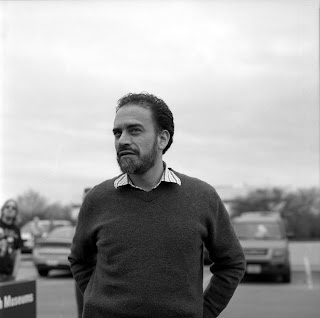 When a door opens, take it.

There is no doubt that analog film shooting is back in a bigger way than most of us envisoned. Whether it is the simply a revival of film due to people looking for something new, or people fed up with digital perfection, or a surge of interest in film as an artistic medium, there is no doubt that we are seeing not only a surge in film sales, but introductions of new films from manufacturers other than the BIG THREE (Kodak, Ilford, Fuji).  What has been noticeable is the indifference of the major camera manufacturers to this phenomenon.  Lomography is the mainstay in terms of offering up new film cameras, as well as resurrecting some of the cameras from the former Soviet Union.  Yes, I am fully aware of the massive number of film cameras sitting out there, waiting to be used -- literally millions.  Yet, they are ageing, and repairs for them are getting iffy, seeing that there are a limited number of places that can do major repairs of cameras.  What about a new, attractively priced Nikon FM-style camera, or a Pentax K1000-style camera, or maybe even a Canon EOS film camera? Nada from those guys.  They are putting their money into yet another iteration of digital cameras that will make you have to get a new computer to keep up with the size of the digital files. Most of us that are hobbyists long ago figured out that 14 MP was enough. Hell, for many things, a 6MP DSLR is enough.

I have a good number of excellent film cameras, so why should I worry?  But, there are probably thousands of people that would buy a new 35mm SLR if any were available, especially if it were offered in a lens mount that is popular.  I know that Cosina made the Bessaflex around 2002, and I sort of lusted for one for a while.  The Nikon FM10 was made until very recently.  So, Cosina would be the obvious choice for a manufacturer of a new SLR.  But nooooo!

Enter the announcement of some surprises in the past few weeks on Kickstarter.
The REFLEX camera was announced just about two weeks ago, with little initial information. At first, I was skeptical of the product (for the aforementioned reasons), but after they released their video and the camera specs, it now seems like a pretty interesting advancement in a 35mm SLR.

Now, there is also another 35mm SLR, the Ihagee Elbaflex. Incorporating a Nikon F-mount is a great idea, and I am waiting to see more information in a few days.  This is the type of camera that I would hope for, and something that schools could actually purchase as a learning tool.  The 1/500 sec max shutter speed may seem limiting, but really, it's not.  Perhaps it is a clone of the old Kiev 19, which has an F-mount (and I have one of those).  We will see more about the product in a few days.  EDIT -- Today's (11/12) post from Kosmo Foto also hints at the Elbaflex being a revamped Kiev 19 SLR.