Trippin' with that Lomochrome Purple! 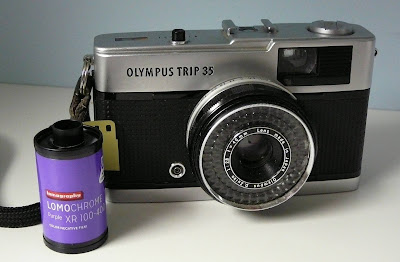 Last year, I reported on using my one and only roll of Lomochrome Purple XR 100-400.  In the fall, I immediately placed an order for 5 rolls when Lomo announced they were accepting pre-orders for a new batch.  The film arrived back in May, I think, but due to the whole moving thing, my rolls were tucked away until things were settled here in North Carolina.  In August, I finally shot the first of my Lomochrome Purple in my Olympus Trip 35.  I sent the roll to The Darkroom earlier this month, and they processed the film.    I scanned the negatives in my Epson V700 scanner, and of course, I am really liking the results.  I shot the film at ISO 200, and the Trip 35 is the perfect camera for these wacky films.  I am not tying up an SLR with an unusual film, and as the Trip 35 takes up so little space in my bag, I can carry it with me on multiple photo shoots and it's there when I see something that I think would look good in that alternate reality world of Lomochrome Purple.

Here are a few images from the roll.  Most of them are on my Flickr page, as well.  I think the 200 ISO rating gives some nice results, and it's like a faux color infra-red film.  I know that I'll get the best results in full sun, so I try to go with that when I can.  I really enjoy using the Olympus Trip 35, and it remains one of my favorite little cameras.