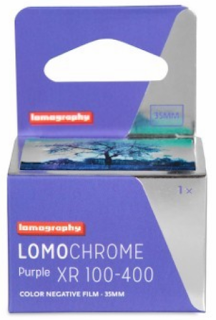 Earlier this year, I was able to purchase a roll of LomoChrome Purple from the Film Photography Project store. For those that are not familiar with this film, it's a C-41 color film that is rated at 100-400 ISO, with the results looking much like a color infrared film.  However, it's not an IR film, but an emulsion that is definitely quite unusual and enables some creative imagery.

Lomography 's LomoChrome Purple XR 100-400 comes in 35mm cassettes and 120 rolls - when it is available.  Like some other Lomography films, it sells out quickly when it is announced. My previous review of LomoChrome Turquoise was based on the only roll I was able to obtain, and that was such an interesting film to experiment with that I wish I'd had a few more. After shooting the one roll of LomoChrome Purple, I wish I had purchased 10 rolls.  This is definitely a fun film to shoot with.  Greens turn to purples and red, blue skies go cyan, and other predictable color shifts and contrast changes occur depending on what ISO you shoot with. Since it is not an IR film, you do not need any filters to get the IR-like effects.

I loaded my Yashica FX-7 Super with a roll while on a trip to Oregon, back in late May.  I set my ISO at 200, figuring it was the best choice, based on the reading I had done.  I shot about half of the roll at the Portland Japanese Garden, and the other half while visiting the famous Multnomah Falls, not that far from Portland. I really did not know what my results would be like, and the exposed film sat in my darkroom for a few months until I got around to doing a bunch of C-41 processing.

After developing, I saw that the film does not have the typical orange base color of a typical C-41 film.  The negatives looked odd, as they should, since this film has strange, but predictable color shifts.   I scanned them with my Epson V700 scanner, and here are some examples from the roll of film: 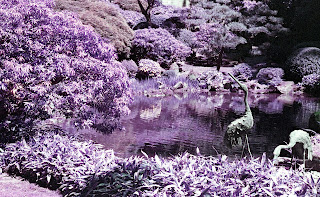 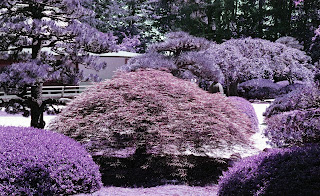 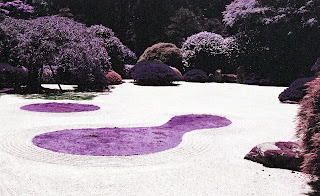 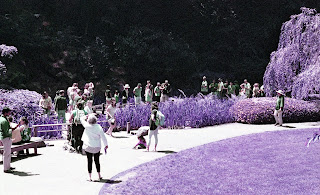 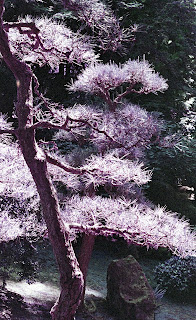 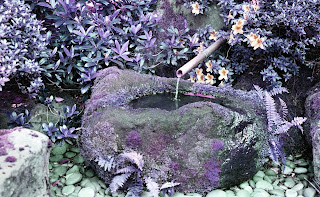 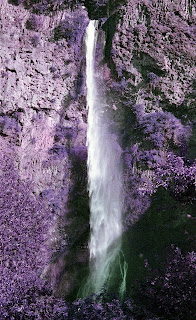 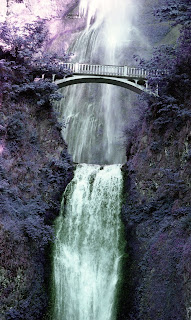 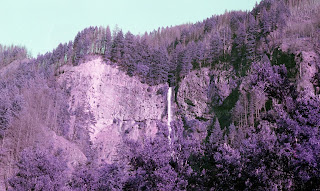 Obviously, this film isn't for everyone.  Some will deride it because "things don't look that way."  I find it to a lot of fun to shoot with, giving a pleasing and less intense result than from color IR.  The problem is that the film usually is not on the shelves very long, and sells out within a short time.   I should have bought a few more rolls at the outset, and I hope that Lomography runs another batch soon.  The beauty of this and similar films is that it's all done in the camera, not via digital trickery.  In fact, I am not sure one could do this easily in a digital camera.  With the LomoChrome purple -- just point and shoot!
Posted by mfophotos at 2:21 PM

Man, I love shooting Lomo Purple! You picked a great time and place to shoot it this year. All of those greens in Oregon during the spring time is perfect for that film. I don't believe I've ever seen Multnomah Falls shot in purple (and I've seen thousands of images from this place), so that was really cool. Same for the Japanese garden. I've never developed it myself, though, although I've done a lot of c-41 processing. I always try to save it for 'special' occasions and have the folks at Blue Moon take care of it for me. I just hope Lomo sees fit to put out some more Turquoise some day. We can always dream, I guess.

Hey, when you're in Oregon again, and can spare a day, let me show you around the east side of the state. Just a couple hours out of Portland is some vastly different terrain. Great to see photos from your trip!

Love it!
Another Avenue of creativity to explore.

Rick, Thanks for your comments. If I get out your way again, I'll be sure to set up a meetup!