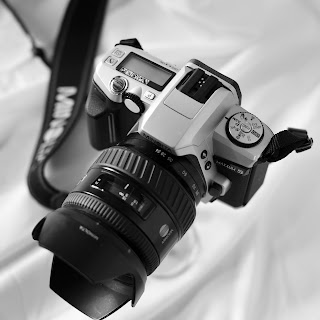 I have only used a Minolta auto-focus camera a few times in the past -- A neighbor wanted me to sell her Minolta Maxxum 7000 and lenses for her, so I tested everything out with a roll of film before I did so.  While that camera had something going for it when it first came out, it was slow and a bit clunky in the user interface, compared to modern AF SLRs.  I also have seen a plethora of used Maxxums of various types in thrift shops, etc., sitting there, forlornly waiting for a new owner.  As I recently tested a Maxxum QTsi and was quite pleased with the results, it is just a P&S camera.  Since then, I acquired a Minolta Maxxum 5 with a 24-85mm lens.  Once I put new batteries (2 CR-2) in it, it came to life.  It helped that it had a manual, since this is a feature-packed SLR.  It features eye-start, and just about every setting one might want to use in a film SLR camera.    I am not going to go into a full review of the camera's features and settings, since they are already online elsewhere. One thing that caught my attention right away -- this has to be the lightest, compact and full-featured SLR that I have used.  If you have small hands, this is a great choice for an AF SLR.  The controls are easily accessed, and the wheel in the front of the camera controls the aperture when you are in A mode, and other settings as you rotate the mode dial are managed via the wheel.   The lens focuses quickly and the camera is very responsive to the user. 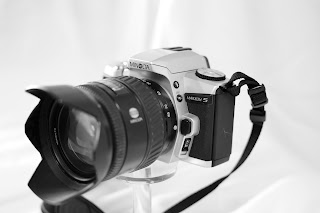 The Maxxum 5 is the top of the line in the compact SLR bodies, and the larger, more professional-quality Maxxum 7 and Maxxum 9 remain at the top of the Minolta AF SLR bodies, with features that rival and even surpass Nikon and Canon's top models.  However, the sun was setting on Minolta as the digi revolution was underway.  It's too bad, but on the other hand, you can pick up these SLRs for a fraction of what they originally cost, and the A-series lenses are rather inexpensive.  If you are looking for a auto-focus SLR and have no current investment in a system, take a look at the Maxxum 5, 7, or 9.
I shot a few rolls of b&w film for my initial testing, and have no complaints.  The camera handles VERY well, and I enjoyed using it.

Posted by mfophotos at 9:58 AM

Good stuff, Mark. Funny, I seem to see these for sale in my area by older people who used them 20 years ago, and now want upwards of $200. Because, you know, they still have the original box. I've yet to be able to talk somebody down to a reasonable market price.

Heck, the Maxxum 5s are about $20 at KEH! Glad that you enjoyed the post!
Mark

I have the Minolta Maxxum 5 QD along with Tamron 28-80mm and Tamron 75-300mm lenses and a Tamron 1.4x Teleconverter in new condition (I also have 3 rolls of Kodak 200 and 2 rolls of Kodak 800 film probably from about 2005 when the camera was last used) all neatly packaged in a like new Tarmac Expodition 5 backpack. I purchased it all new in 2003 and used it very little due to obtaining a digital camera shortly thereafter. Im in Denver, CO and if I was to sell it, what would be a reasonable price to ask? Thank you for your opinion.